With its fairytale palaces, tiger-dense forests and traditional villages, colourful Rajasthan is quintessential India for many. Plan your ideal visit with these four itineraries

The sun was low in the sky when the Manganiyar performers arrived. I could hear the tinkling of the women’s ankle jewellery and smell the smoke trailing from the men’s bidi cigarettes as they climbed up to the roof terrace outside the window of my Rajasthan hotel room. By the time I’d joined them on the roof, nursing a cup of tea laced with cardamom, the family were in full flow, instrumentalists cross-legged in the front row playing harmonium, tabla and flute; behind them, wives and sisters sat with veils pulled low over their faces, underscoring the rhythm on camel-bone castanets and finger bells. Topped by a scarlet turban, the lead singer raised his palms skywards now and again, or touched the tips of his fingers with his thumbs to emphasise the cycle of beats.

The song rose in cadences as the colours on the carved sandstone balconies next to us grew more intense. Beyond the musicians stretched an ocean of darkening desert, inky blue and ochre. The cooking fires of distant camel camps shone like trawler lights in the gloom.

Moments like this are commonplace in Rajasthan. With its sublime scenery, ubiquitous traditional dress and exuberant architecture, it’s no surprise this north-western state – boasting a hefty chunk of India’s Pakistan border – attracts the lion’s share of first-time visitors to India. But the area is also big enough to ensure that you don’t have to venture all that far off the beaten track to discover bucolic corners where the 21st century has made little discernible impact. Whether fairytale palaces, hidden tigers or Manganiyar music are what you’re hoping to experience in Rajasthan, the following itineraries will offer plenty of pointers. 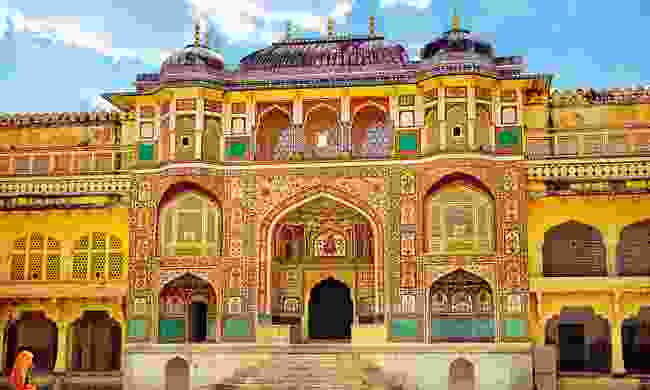 Why go? Tick off the classics in one focussed fortnight – or longer – of varied travel. Perfect for first-timers to the state.

When to go: October–March, when the skies are blue, nights (often very) cool and daytime temperatures pleasant.

No one goes on holiday to Rajasthan for just a week – unless they live in Delhi. To tick off the state’s must-see sights, you’ll need at least two (or ideally, three) weeks. Slotting together seamlessly on the end of a ‘Golden Triangle’ tour through Agra (home of the Taj Mahal), this itinerary traces a loop around the highlights, passing a handful of lesser-known sights along the way. Extend it with any of the shorter routes featured later in this article.

Starting point is the Rajasthani capital, Japiur – the ‘Pink City’. The name derives from the regulation salmon colour of its historic walled core, whose bazaars (great for gemstones and block-printed textiles), havelis (courtyard mansions) and royal palaces offer endless scope for exploration. Visit Amber Fort, on the northern outskirts, first thing in the morning, when the ochre walls and richly decorated apartments look at their most resplendent.

Next up is Pushkar, where a belt of whitewashed Hindu temples enfold the shores of Pushkar Lake, on the fringes of the Thar Desert. Join pilgrims for a pre-dawn puja prayer ritual on the ghats (the sacred steps leading to the water), then climb to the hilltop shrines overlooking the town for views across Nag Pahar mountain. Lots of people skip nearby Ajmer, but that would be a mistake: the Dargah (Sufi tomb) at the city’s heart is the most sacred site in Islamic India and a particularly atmospheric spot on Thursdays, when qawwali music is performed live.

From Pushkar, continue north-west to Nagaur – another often-bypassed jewel and the site of one of India’s most beautiful fortress-palaces as well as a scattering of ancient Sufi shrines. Then press on to Jaisalmer, the honey-hued citadel in the far west of the state, near the Indo-Pak border, where you can savour the distinctive atmosphere of the desert through camel treks and rooftop music recitals.

A long day’s journey takes you south-east from Jaisalmer to Jodhpur, the ‘Blue City’ famed for its cobalt old town and fort, Mehrangarh. Be sure to visit the Bishnoi minority villages in this area, where local people worship a species of antelope known as the ‘black buck’, before continuing south to the Aravalli Mountains. There, you might wish to pause for a night at Kumbalgarh Fort, so as to tackle a dawn trek around India’s most extensive set of medieval ramparts – a hike into a forgotten world of ruined shrines and astonishing vistas across the plains.

Your final destination on this trip is Udaipur, Rajasthan’s serene lake city. Boat cruises, palace tours, souvenir shopping and sessions exploring the rooftops as the sun sets over Lake Pichola bring the trip to a suitably chimeric conclusion. 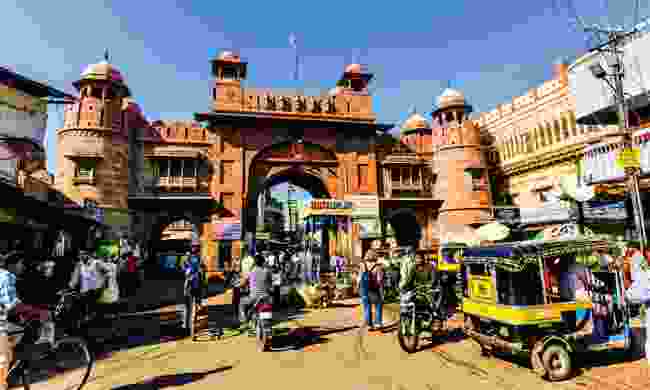 Why go? Experience a less-visited region that’s close to capital Jaipur but feels a world away culturally. Usefully, it can also be an alternative route to Jaisalmer.

When to go: October–March

Centuries ago, a spur of the Silk Route would send traders west across the Thar Desert all the way to Sindh and the Indus River. This ancient artery, in use since the time of Alexander the Great, closed abruptly with the creation of the Pakistani border in 1947, but numerous vestiges of past splendour survive in the towns and villages dotted along it – notably in the region of Shekhawati, just north of Jaipur, where a wonderful crop of painted havelis (courtyard mansions) rise proudly from tangles of old, sand-blown streets.

Base yourself either in the market town of Nawalgarh or – for a swanky heritage option – in the castle hotel at Mandawa. Either way, a wealth of superb historic properties, forts and temples lie within easy reach of day trips in this area. Shekhawati’s painted havelis are famous not merely for their religious imagery, but also folk-art depictions of the wonders of the early colonial era – steam trains, hot air balloons, motor cars, red-coated armies and topi-wearing British officials feature prominently among the usual array of many-armed deities. Hotels and guest houses in Shekhawati also offer eco-friendly camel cart trips out to local villages and traditional textile or pottery workshops.

From Mandawa, continue west along the old caravan trail to Bikaner – a Rajput oasis city sculpted from chocolate-coloured sandstone. As well as another assemblage of palaces and havelis, you can visit the ‘rat temple’ at Deshnok, where thousands of holy rodents swarm around a marble-lined shrine dedicated to warrior-prophet Karni Mata.

Top tip: The town of Jhunjhunu, in northern Shekhawati, is home to the Rani Sati temple, dedicated to the titular victim of 'sati' - ritual self-immolation - who threw herself on her husband's funeral pyre. 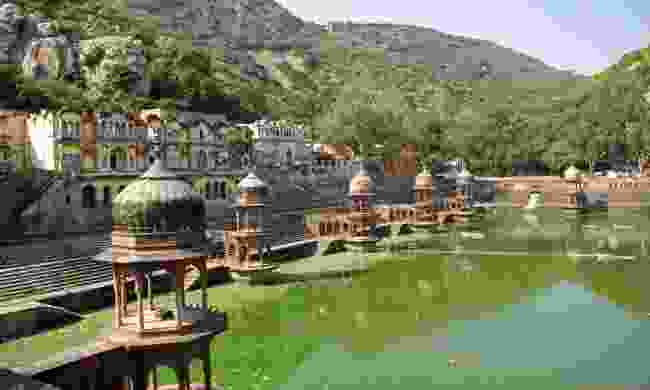 Why go? An off-the-track alternative to the standard Agra-Jaipur stretch of the Golden Triangle, taking in two deserted palaces and some fabulous countryside.

When to go: October-March

Following the well-trodden ‘Golden Triangle’ route from Agra along National Highway 21, most travellers approach the Rajasthani capital Jaipur from the east. A more interesting alternative, however, detours north through the wooded hills of the former princely state of Alwar, home to a couple of outstanding royal palace complexes where you probably won’t encounter a single tout or tourist.

Your first stop after Agra and Fatehpur Sikri will be Bharatpur. Although it is itself the site of a rugged fort (which repulsed along siege by the British in 1805), the town is of interest primarily for the UNESCO-listed Keoladeo Ghana National Park on the outskirts. Even if you’re not a confirmed wildlife enthusiast, this reserve should be a compelling stop in the winter months, when its wetlands teem with birds and reptiles, including giant sarus cranes and pythons. Safaris are typically conducted by bicycle and are a joy after the mayhem of the big cities.

An hour’s drive further north, Deeg is where the Bharatpur Maharajas used to spend the summer months luxuriating in ornately decorated palaces beside a pair of shimmering ornamental lakes. Few bother to visit the monuments these days, but their pierced-stone marble screens, filigreed pavilions and fountains are straight from the pages of a Mughal miniature painting.

Continue from there to Alwar, site of an even grander palace and fort, set against a backdrop of craggy peaks. If you like your Rajput monuments dilapidated and atmospheric, rather than crowded and polished, this superb pile should fulfil your expectations. An added incentive is the chance to stay in a particularly delightful heritage property called Dadhikar Fort, hidden deep in the nearby hills.

If your budget can stretch to it, the ultimate place to wind up this itinerary would be a couple of nights at the recently opened Alila Bishangarh – a Rajput palace that took nine years to restore and now boasts some of the most stylishly converted royal apartments in India, with sleek, contemporary interiors and cusp-arched windows framing glorious rural views.

Top tip: Wildlife lovers may wish to extend this trip west to Keechen, near the town of Phalodi, where thousands of demoiselle cranes gather in the winter months, attracted by a supply of free grain donated by local Jain priests. 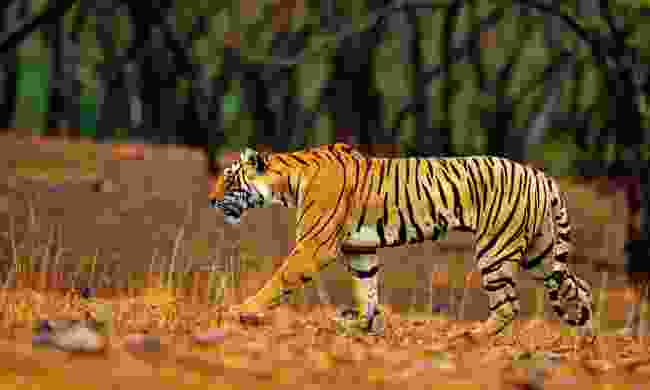 Why go? To experience the wild landscapes and rarely visited monuments of Rajasthan’s far south-eastern districts.

When to go: October–March

Sidestep the crowds in the little-visited south-eastern corner of Rajasthan. This is a great route if you’ve travelled in the region before but want to venture further off-piste for a taste of what the country was like 30 or more years ago. The obvious difference between then and now is the presence – tucked away in beautiful hilltop or riverside locations – of some outstanding heritage hotels where you can experience life in small market towns and rural villages from the comfort of a bona fide, functioning Rajput palace.

The trip begins at Sawai Madhopur, springboard for Ranthambore National Park, one of the country’s foremost tiger reserves. If you haven’t yet seen a tiger in the wild, you might be tempted to linger here in the hope of sighting a big cat or two lounging in the ruined lakeside pavilions, or stalking herds of chital deer on the edge of Ranthambore’s forest. The park is also serviced by a crop of safari lodges and camps offering the last word in retro colonial chic. Otherwise, continue south to Bundi, a traditional Rajasthani market hub whose old town sprawls from the foot of an imposing 17th-century palace.

Early the next morning, climb the hill to see the murals in the palace’s former zenana, or women’s quarters, which depict episodes from the life of Krishna in vibrant blues, greens and reds. Later, press on south to Bhainsrorgarh, where another ancient royal complex crowns a cliff top overlooking a bend in the Chambal River. Make the most of the views from the domed cupolas on the roof, where you can dine by candlelight in the evening. Orchards of guava and papaya line the far banks, reachable by rowing boat – a treat in the early morning sunshine, though be sure to keep a careful eye out for gharial crocs basking in the shallows.

Your final destination will be the town of Jhalawar, in the south-east corner of Rajasthan on the edge of the Malwa Plateau, where you can stay as a guest of the local Maharaja, Rana Shri Chandrajit Singhji Dev Bahadur, and his family. Encircled by a lotus-filled moat, Prithvi Vilas Palace is well placed for explorations of the area’s remote temples and forts, foremost among them the citadel at Gagron, spectacularly sited at the confluence of two rivers.

Did you know? Ranthambore was a private and exclusive hunting reserve of the Jaipur royal family until 1955.