From stunning art installations to challenging mythological creations, these astounding fountains take creativity and credulity to refreshingly new heights. Which is your favourite? 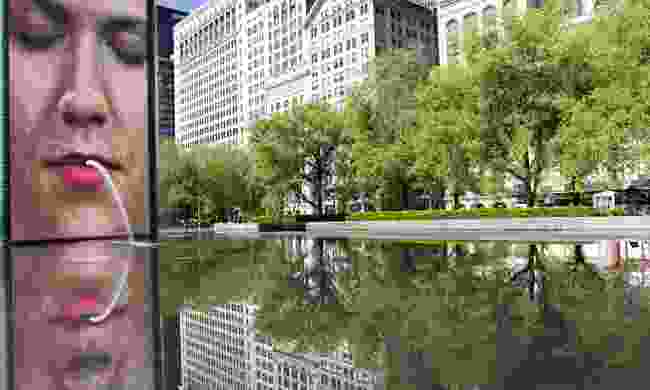 Designed by Catalan artist Jaume Plensa and built by Krueck and Sexton Architects, it cost $17 million and opened in July 2004. The ‘subjects’ were found by calling community groups around the city and asking for volunteers. They were then videotaped sitting in an adjustable dentist chair. 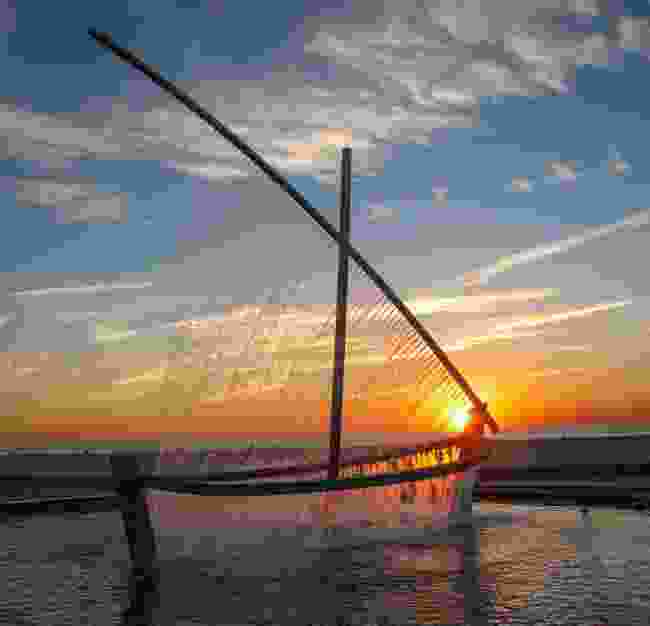 A highlight of any early evening stroll along Playa de la Malvarrosa in Valencia, the Water Boat Fountain is a simple as it is beautiful. Jets of water, strategically flowing from various parts of the sculpture, give the illusion of the sail and body of a boat. It is particularly beautiful at sunrise. 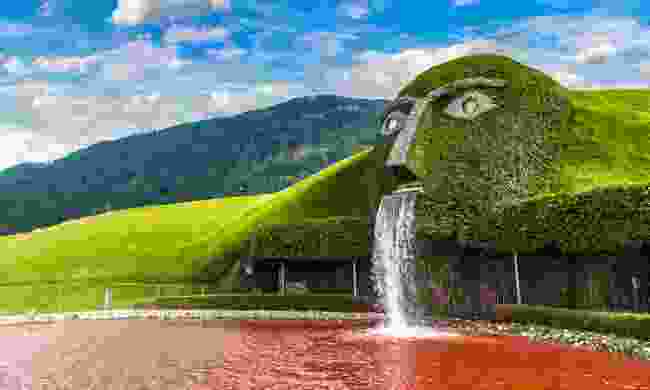 Striking, and somewhat jarringly out of place, the fountain guarding the entrance of the Swarovski Crystal Worlds (Swarovski Kristallwelten) museum in Wattens, Austria certainly makes an impact. Designed by Austrian architect André Heller to mark the 100th anniversary of the crystal company Swarovski, it is a giant, grass covered head, with large sparkling eyes and a fountain flowing from its mouth.

According to Heller, the giant settled in Wattens after a long journey, bringing with him the most precious treasures of the world. He sits guarding them, inside his “Wonders’ Rooms" –that is, the museum.

Tucked away in the South Gate Building of the new Osaka Station City complex, you’ll find one of the most mesmerising and deceptively practical fountains in the world – a rectangular wall fountain that displays the time.

The fountain displays a digital-style readout, amongst moving floral patterns and falling shapes, in the collapsing wall of water. A digitally controlled printer ejects water droplets in carefully controlled patterns which are illuminated by overhead lights. Take care though. The display is so captivating you may miss your train. 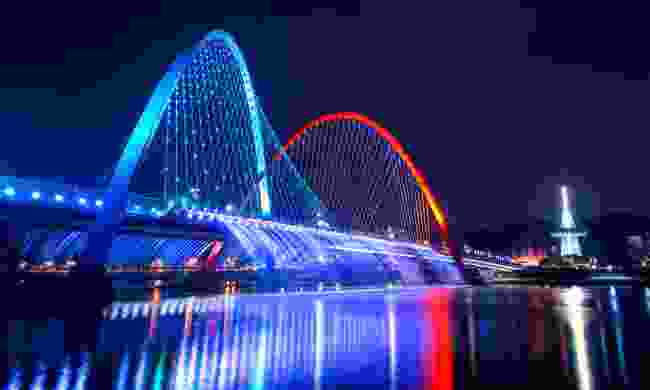 Stunningly beautiful – and eco-friendly too - the Moonlight Rainbow Fountain on the Banpo Bridge in Seoul is the world's longest bridge fountain, with nearly 10,000 LED nozzles running along both sides of the 1,140m long bridge. Opened in September 2009, it shoots out 190 tons of water per minute.

The brainchild of former mayor of Seoul, Oh Se-hoon, the bridge was intended to both beautify the city and showcase its eco credentials. The water is pumped directly from the river itself and is continuously recycled. 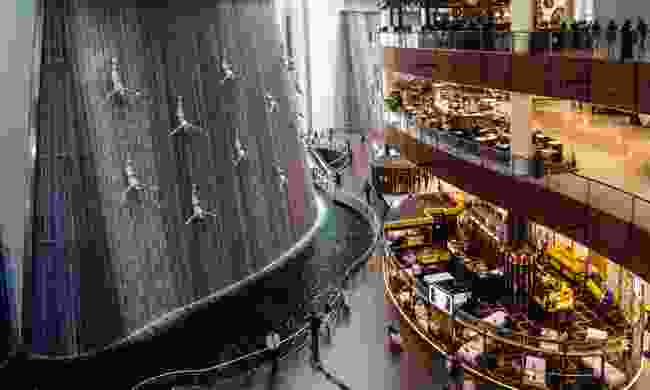 Flying sculpture of a diver in Dubai Mall (Shutterstock)

Everything is bigger and better in Dubai and that applies to fountains too. The city is dotted with awe-inspiring fountains. But none are as compelling or as breathtaking as the Divers Fountain in The Dubai Mall.

Dropping 24 metres, past all four levels of the indoor shopping centre, the fountain features fibreglass sculptures of divers, mid-dive. Opened in 2009, and designed by Singapore-based DPA Architects, the fountain is a tribute to the pearl divers who played such an important role in the city’s early history. 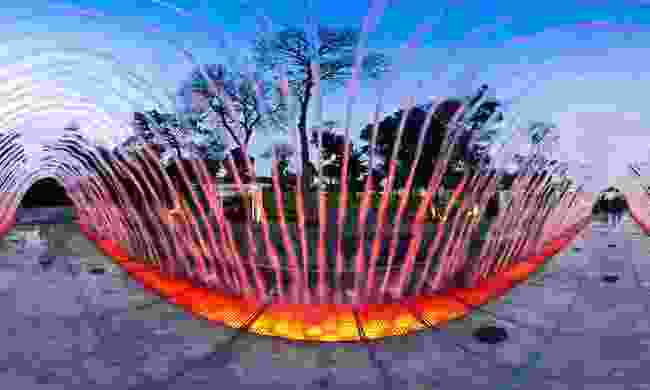 Tunnel of water in Lima (Shutterstock)

The Túnel de las Sorpresas (Tunnel of Surprises) is but one fountain in Lima’s extraordinary Circuito Mágico del Agua (Magic Water Circuit). Opened in 2007 and set in a 19-acre park, the circuit features 13 illuminated fountains and has quickly became one of the city’s most popular attractions.

The Tunnel of Surprise, like many of the fountains in the complex, is interactive, and getting through it dry requires timing and determination. One mistimed step and you could end up drenched. 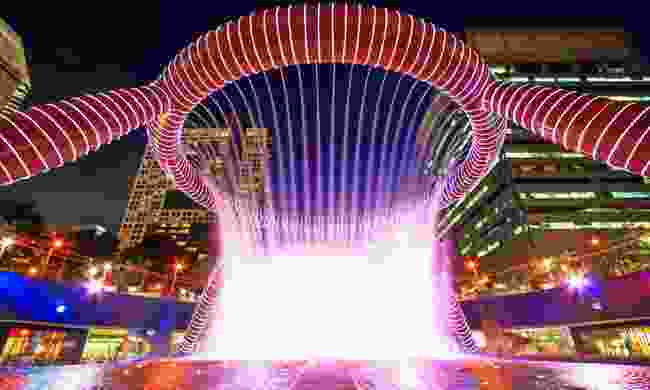 Fountain of Wealth at night (Shutterstock)

Designed to be a symbol of wealth and life, the Fountain of Wealth in Singapore is also the world’s largest. Based on the Hindu Mandala, the giant bronze ring was designed to reflect  the equality and harmony of all races and religions in Singapore.

It is also an integral part of the overall design of the Suntec City complex within which is sits. The five towers surrounding it represent the fingers and thumb of a left hand emerging from the ground. The fountain forms the palm. 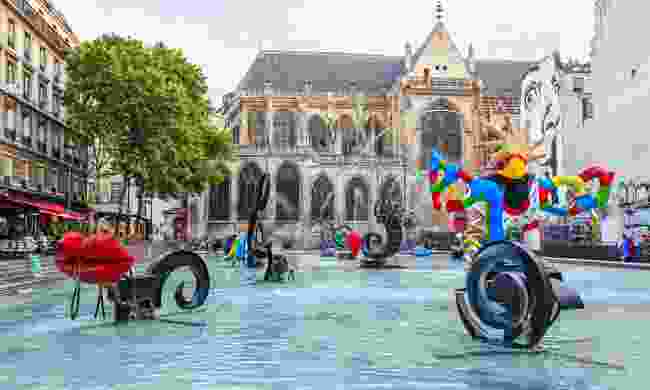 The Stravinsky Fountain is a whimsical public fountain next to the Centre Pompidou in Paris. It is decorated with sixteen works of sculpture, each inspired by Stravinsky’s most famous work, The Rites of Spring.

Each ‘piece’ moves and and sprays water, and was created by sculptors Jean Tinguely and Niki de Saint Phalle. Surreal, colourful and playful, the fountains is popular with Parisians looking to both cool down and brighten up their day.