Wander Woman: Can 'underwater IVF' save the Great Barrier Reef?

As news of the Great Barrier Reef’s demise seems to dominate the headlines, Wander Woman Phoebe Smith heads Down Under to meet the man who’s helping to bring it back…

“Is that a… a… giant condom?” Perhaps not the question you’d expect to ask a stranger over dinner, but then this was no normal supper-time gathering.

I was on Heron Island, a sandy 300m x 800m coral caye off the south Queensland coast in Australia, to discuss the state of the Great Barrier Reef with scientists, conservationists and environmentalists. 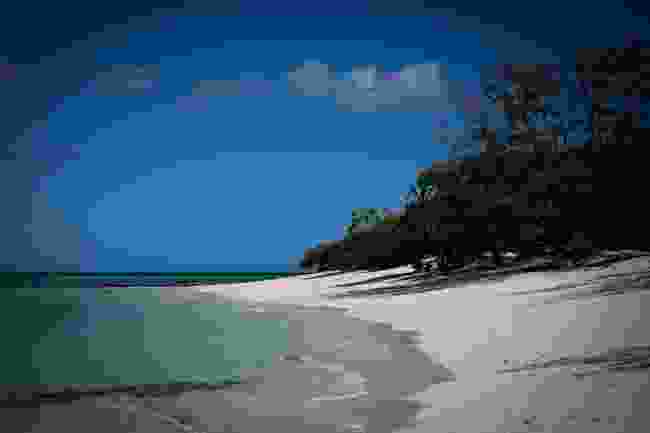 My query was posed at a professor, called Peter Harrison, who had casually mentioned over our feast of fresh seafood, salad and local wine, that he had figured out a way to capture coral sperm and eggs and impregnate them into sections of bleached reef - a kind of large-scale underwater IVF project.

“What happens each year is a mass spawning, where essentially a sort of sex soup is released into the water,” he said, as I seemed to go off the chia dessert in front of me.

“It happens naturally and is usually at the mercy of tides and fish and marine mammals who like to feast on it, so only some of it makes it to another area to settle,” he continued. “That’s why we have to capture it and keep it safe to give it the best chance of surviving.”

It was then I asked the fateful question: how an earth do you go about capturing it? To which he provided a photo of a huge, long and clear sack. Now, we're back to the condom question.

“Essentially, yes,” he laughed. “Though of course, our goal is the opposite of the reason you’d traditionally use one!” 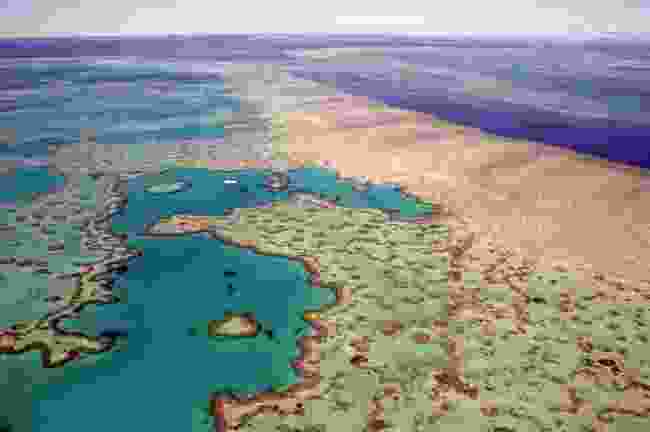 Heart Reef in the north of Queensland, Australia (Shutterstock)

Having visited the reef the year before – up in the north around Lizard Island (about an hour’s flight from Cairns), I was intrigued by his idea that we can intervene to help reincarnate sections of bleached reef and bring life back to the largest living organism on earth. (For context, it’s about the same size as 70 million football pitches.)

There, owing to rising sea temperatures and two successive huge cyclones, I had seen vast swathes of coral seemingly completely devoid of life in what is technically termed ‘bleaching’. 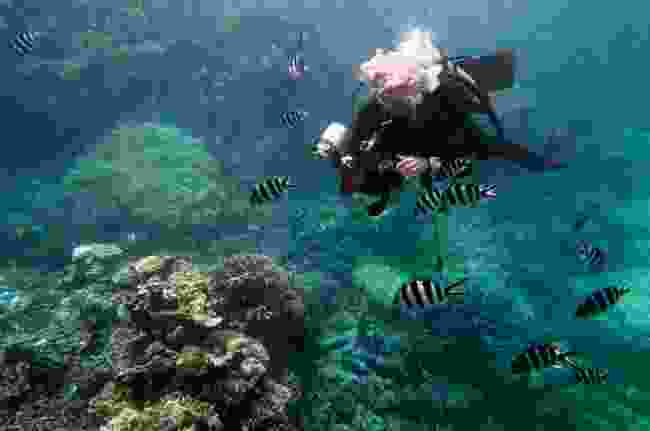 Up there, I thankfully noticed sections where, slowly, the reef was starting to re-spawn naturally, but overall the picture was unlike those technicolour photographs you normally associate with underwater corals.

Ever since Attenborough highlighted the challenges the reef faces a few years ago, people have had two reactions. Either going ‘before it’s too late’ (because they want to visit) – or being reluctant to visit at all, saying either ‘it’s too late’ or ‘it’s harmful’.

All of those people may be relieved to find out that, in actual fact, the total opposite is true. Visiting, and being respectful, can actually help the reef in some small way.

“For each visitor to the reef, per excursion, a donation of $6.50 is made to the Great Barrier Reef Marine Park Authority (GBRMPA) which is working hard to protect and revive it,” explained chief scientist Dr David Wachenfeld, once the talk about the coral’s mating habits ended in time for a nightcap.

Yep, you can still snorkel the Great Barrier Reef

Keen to do my bit, the next morning I woke early to snorkel on the reef that lay just metres off the island’s shoreline. Starting from the beach, I waded into the water and was immediately greeted by a bevy of fish hanging out by the coral wall.

From large harlequin sweetlips (which look like they’re puckering up to give you a kiss) to giant cowtail stingrays (who hide their bodies in a layer of sand on the seafloor) and rainbow coloured parrot fish darting around in the swell – the water was seemingly alive. But though the sea life was impressive, it was the reef itself that truly took my breath away.

Huge bommies – coral outcrops – protruded from the ocean floor, coated in a mix of russet-coloured stag coral and giant yellow squiggles of the brain variety.

Among them clown fish darted between sea anemones, giant clams with deep purple lips snapped firmly shut, schools of spangly emperor fish almost seemed to embrace me in their numbers as though I was one of them.

A huge loggerhead turtle, easily a metre in width, gently padded in front of me, completely unperturbed by my presence.

Back on dry land 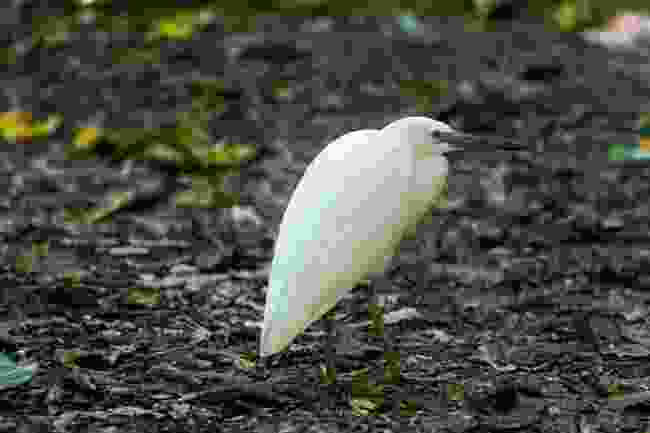 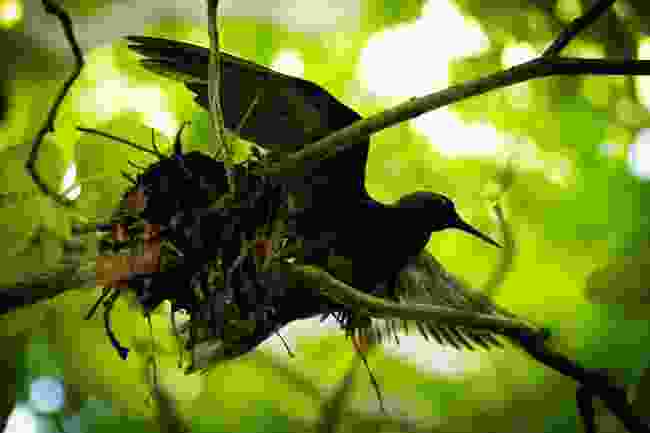 Back on dry land, I strolled through the forest that makes up most of the island itself. The air was alive with the cry of black noddy birds – whose numbers exceed 120,000 – as they nested and perched among the Pisonia trees calling to each other to alert their feathered companions of my intrusion.

I stood on the northern edge of the land to watch the sunrise and lingered at the wonderous octopus bush which has a sacrificial leaf on every clump so that it can soak up saline water in dry spells and still survive.

Later I went for a dive, where green turtles swarmed, tiny nudibranchs seemed to glow almost violet and manta rays appeared to glide through the water as though birds on the wing.

What does the future hold for the Reef? 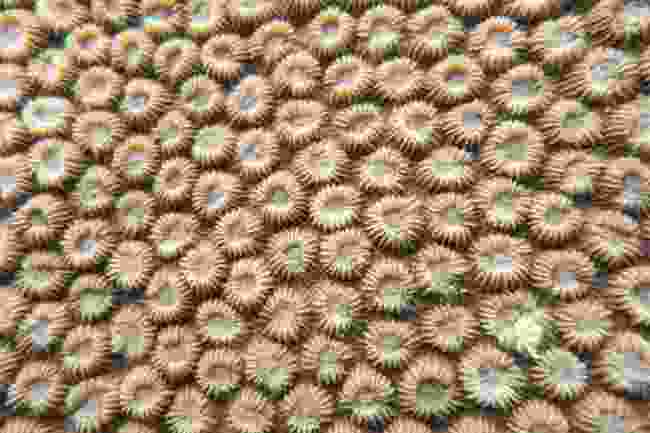 One of Professor Harrison’s 14 projects to help the reef regrow is found just off this island – where a scientific base is also located so that the luminaries of tomorrow can do vital research into coral, which still holds more mysteries beneath its dazzling colours.

According to the figures, the success rate he’s experienced at the 14 sites that have been trialled using the spawn IVF method is 100%. So why, I asked him the next day, is it not taking place all over the reef, given its fragile condition?

“Funding,” he replied matter-of-factly. “I’ve developed a robot that can do it at hectare level, but I have plans to get one that can cover kilometres – which could be a vital tool in our kit to repairing the reef.”

I pondered this: “So, it’s all down to two things: sex and money?” 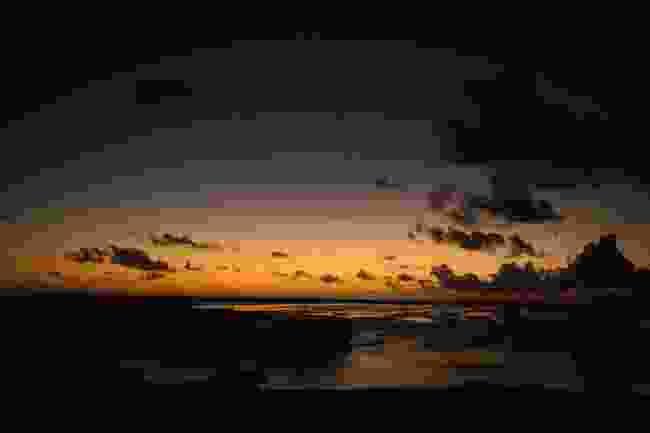 “Isn’t it always?” he replied, smiling.

I left the island later that morning taking the helicopter over the reef towards the mainland and the city of Gladstone.

Beneath me the reef seemed to glisten like a patchwork quilt – brown and gold circles beneath the cerulean blue. The reef not only gives life to the oceans, but also the towns that line its sprawling edge.

While the good Professor continues to collect the ‘sperm and egg sacks’ in his rather special shaped container, though it may seem counter-intuitive, right now, the best thing we can do is simple:

Take steps to make our lives more carbon neutral (like offsetting flights and avoiding single use plastics), and offer the reef our form of protection: by donating, and simply, visiting it. 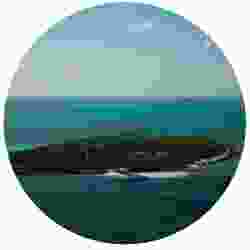