The Johnstone Strait, off the coast of Canada's Vancouver Island, is one of the best places in the world for spotting orcas – all it takes is a kayak and a little patience…

The rain stopped and the clouds lifted just as we slipped out of the tiny harbour at Telegraph Cove, the steep, forested flanks of north-eastern Vancouver Island slowly shrinking to our rear. There were 17 of us in ten kayaks, a miniature fleet of red-and-white fibreglass bubbles all buzzing with excitement as we paddled away. Around us, rock-skirted islets crowned with giant cedars and Douglas firs dotted the glistening waters. In the far distance rose the dark, Mordor-esque mountains of mainland British Columbia, their disembodied peaks floating above layers of mist. As introductions went, it could hardly be more dramatic, but we were not just there for the scenery.

It wasn’t long before we had paddled halfway across the Johnstone Strait, the channel that divides Vancouver Island from the rest of Canada. The strait was the reason we had all come this far, from Europe and distant parts of North America, for it is reputedly the best place in the world to observe orca (also known as killer whales) in the wild. I should have known, of course, that it would not be that easy.

Between two and three hundred ‘northern resident’ orcas congregate here each summer, pursuing the salmon who come to spawn in the rivers of British Columbia. They form roughly 17 pods, many comprising three or four generations of the same family. Each adult measures six-to-ten metres long and weighs between 4,000 and 10,000 kilograms, the males sporting pointed dorsal fins the height of a tallish man. The area also has as many ‘transient’ orcas; these visit year-round, feeding off seals, porpoises and dolphins, so we felt confident of seeing something. 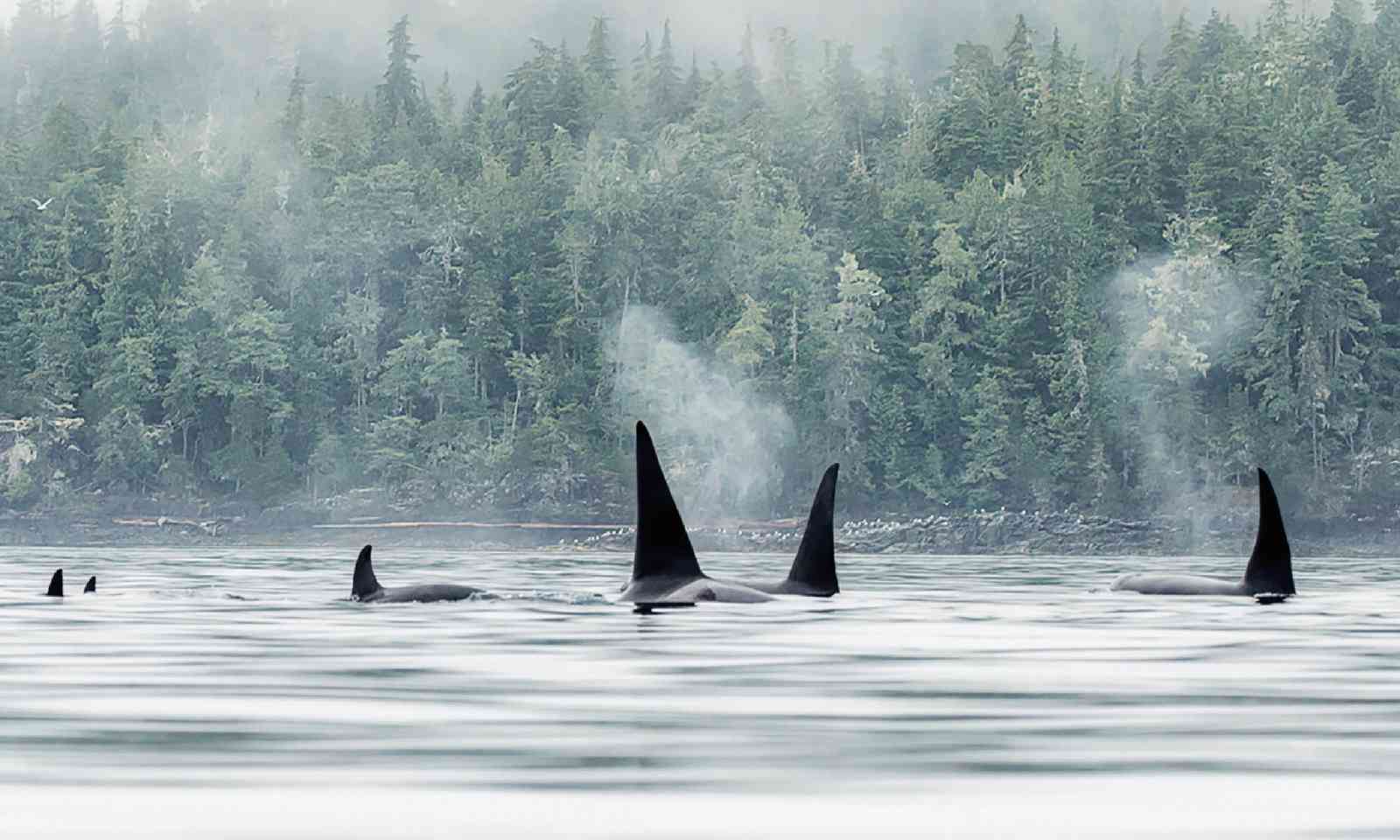 Orcas were once dubbed ‘wolves of the sea’ and accused of decimating local fish stocks. They were systematically hunted down and killed, but are now belatedly recognised as highly intelligent and social animals that occupy a special place in the pantheon of marine mammals. The northern resident orcas of the Johnstone Strait belong to three clans – A,G and R, each with its own dialect, a unique set of clicks and whistles. They never mate with members of the same clan but they do, however, hunt in groups, herding fish into tight balls and then stunning them with their tail flukes.

Above all, orcas are playful creatures, often given to leaping from (or ‘breaching’) the water in huge bursts of spray. The local guides recognise individuals by the marks and nicks on their dorsal fins, or by the markings of the saddle patches on their backs, just behind those fins. And while most are known by letters and numbers, a few have become so familiar as to acquire names.

That first evening, camped in a bay on Hanson Island, some of our group saw a pod pass in the far distance as they sat by the water watching a glorious sunset. But our luck was out. During the next four days we saw none at all.

At first that did not matter, there was so much else to relish. We kayaked several kilometres a day in the freshest air and through the cleanest water, a veritable pod of our own, marvelling at our surroundings. Large whiskered seals basked on sun-warmed rocks as porpoises frolicked close to our craft. Salmon leaped from the water around us. A sea lion raised its great head to survey our little armada as we passed and bald eagles, an endangered species not so long ago, wheeled freely overhead.

We ate picnic lunches on deserted beaches strewn with strands of bubble-headed bull kelp, some 15 or 30 metres long. We hiked along soft paths and flopped backwards on to mounds of spongy moss in temperate rainforests where the canopies of towering, centuries-old trees formed vast natural cathedrals. Each night we camped on a different island, and our three guides whipped up some remarkably good meals considering we had to carry all our food with us. Deer often grazed close by, and we watched otters playing along the shorelines. At low tide, beachfuls of clams spat jets of water into the air. We were literally surrounded by wildlife, but still no orcas. 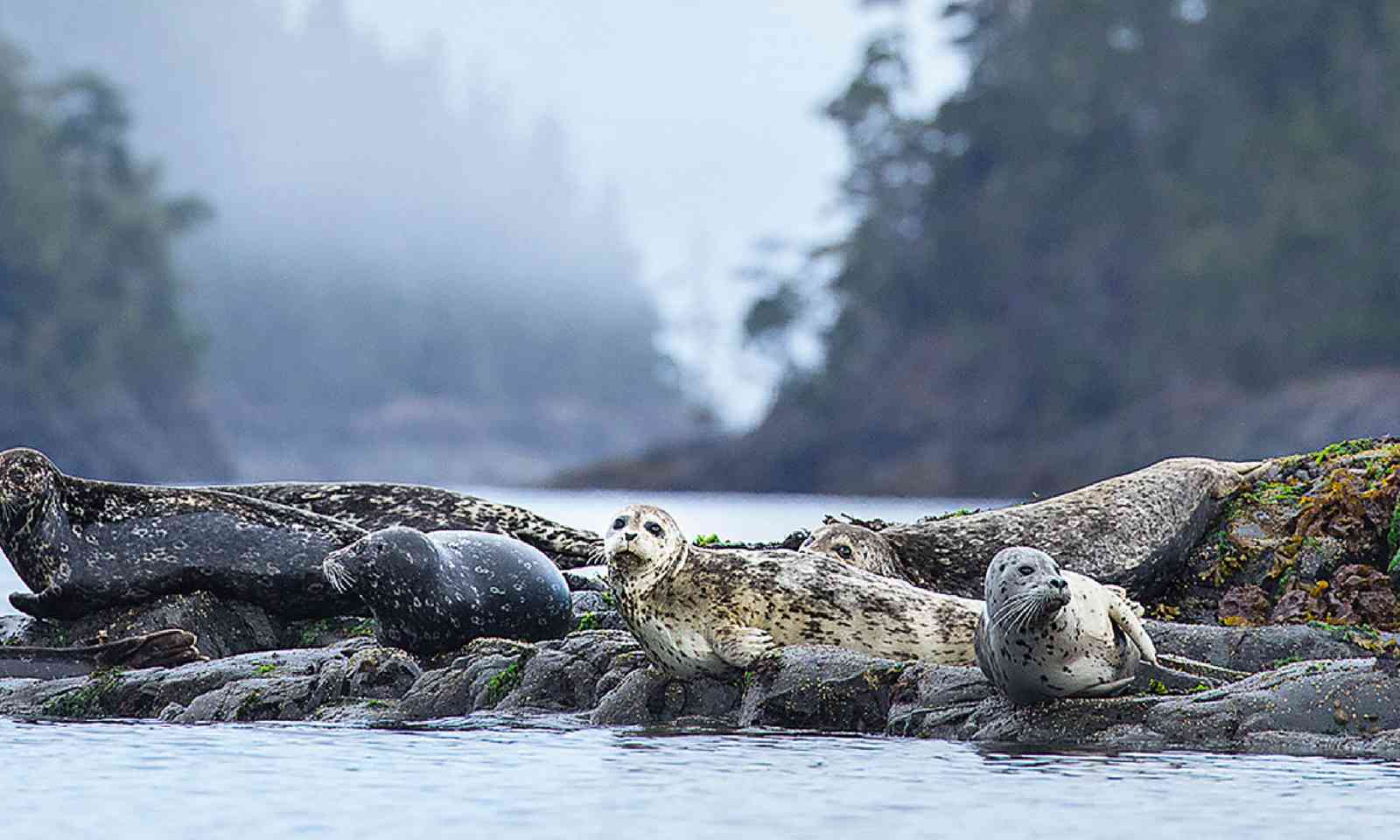 Seals keeping a nervous eye out for orca (Ken Spence)

Our group was diverse. We were male and female, young and old, a nurse, a former diplomat, a human resources officer, a civil servant, a forester, a Silicon Valley whiz kid and a school librarian united by our shared adventure and a good deal of jocularity. But on the third evening, as the rest of the group drank wine before dinner, I took the opportunity to slip away with our chief guide, Mel Lawless, for a little recce on our own.

Taking two kayaks, we slid out into the placid Blackfish Sound as the lowering sun turned the water to liquid silver. We had barely left our little bay before we spotted the spout of a humpback whale nearly a kilometre away. Thinking this an opportunity too good to miss, we paddled rapidly towards it and were rewarded with one of the truly great performances of the natural world.

Time and again the 30-tonne creature surfaced close to our kayaks, each appearance preceded by the sudden eruption of a great plume of water from its blowhole. Repeatedly, its great black body arced slowly and gracefully up and over, the late sun glistening on its back. I was dampened by the moisture from its spouts, and as it dived I could see the individual barnacles that encrusted its great fluked tail.

A hiatus ensued. I thought the leviathan had gone, but then the water began to boil a couple of hundred metres away. Hundreds of gulls gathered overhead, and soon they were diving manically to seize panicking herrings in their beaks. I paddled cautiously towards the feeding frenzy, curious. As I did so, the humpback suddenly erupted from the depths with its great jaws agape, gulping in the fish that it had been rounding up. 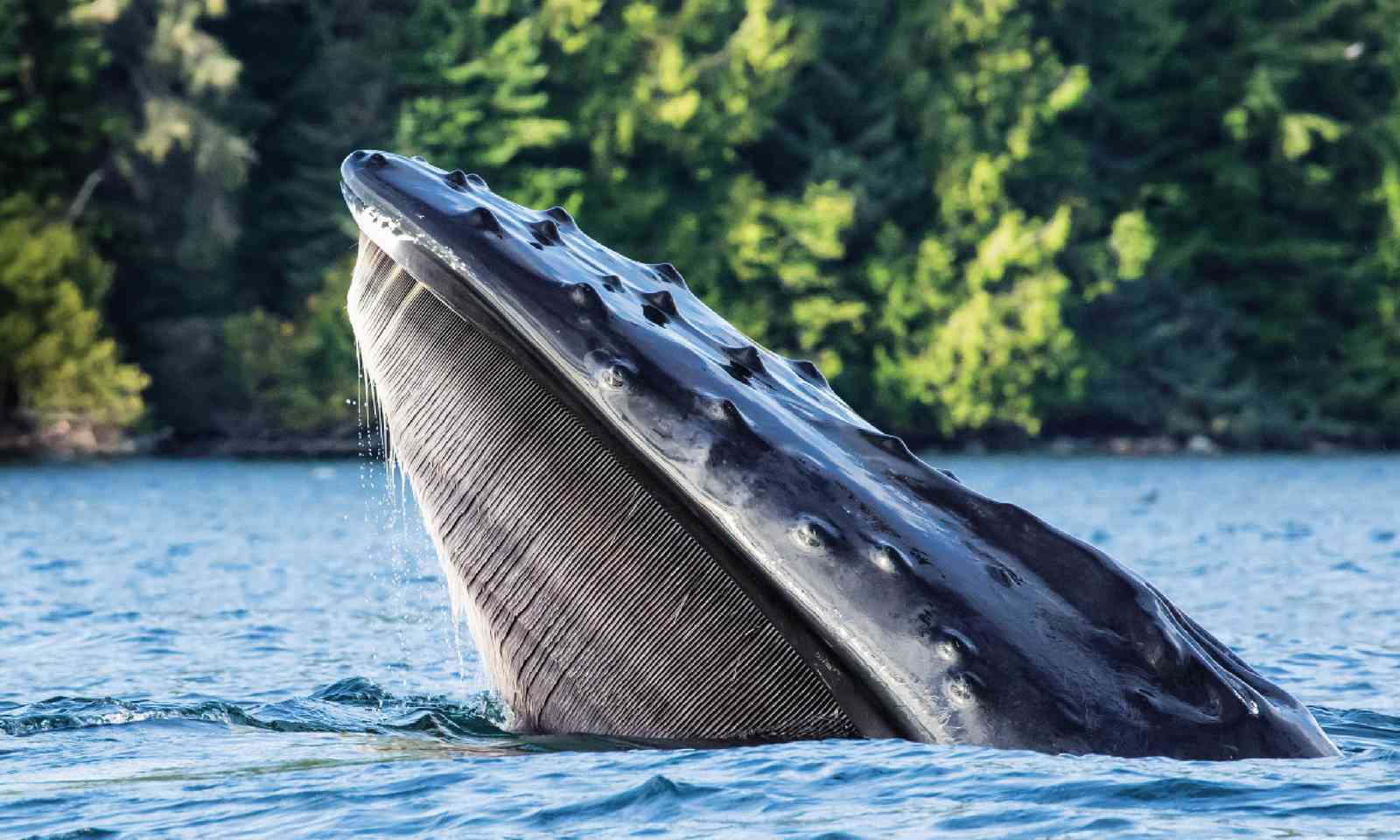 Twice more the whale burst from the water. I was so close that I could almost count the bumpy protuberances (called tubercles) on its long, flat nose. I could see water gushing out through its baleen – the multiple rows of slits below its jaws that act as filters during feeding. Mel was shrieking with either fear or excitement, likely both. In all honesty, so was I.

Catch of the day

For me, that experience alone made the trip worthwhile, but for the rest of the group the lack of orcas became a growing source of concern as our six-day journey neared its end. We could not even listen for their clicks as our hydrophone had broken, and the deteriorating weather did nothing to lift our spirits.

Poor Mel felt the pressure. She had banked on finding orcas at the “rubbing beach” where we spent our fourth night – an area where the whales go to remove old skin by scraping along the shingle beneath the shallow water – but none showed up. On our penultimate day we spent two hours paddling furiously against the tide and wind after spotting a spout in the far distance, but it was like chasing a mirage. We returned to our camp sodden and dispirited – and by this point, with few dry clothes left to change into. That night we ate a rather miserable supper as the rain thudded against the tarpaulin beneath which we sheltered. Our spirits were at a low. 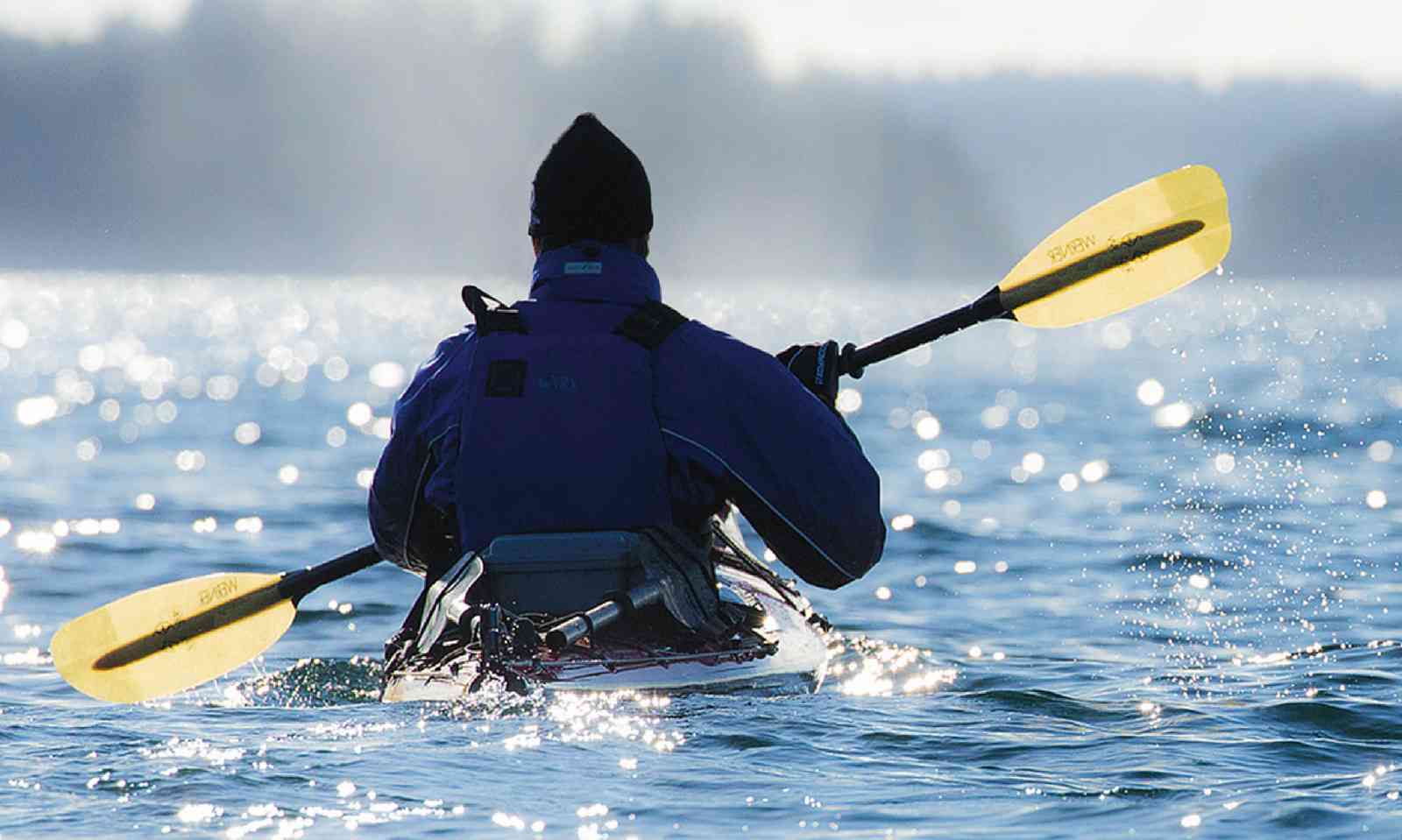 Yet more water drummed down on our tents as we packed up the following morning. Cold and miserable, we set off back to Telegraph Cove. The islands and mountains were shrouded in fog. Our surroundings were so uniformly grey that we struggled to tell where the water ended and sky began. After so much exertion and discomfort, we complained bitterly about the noisy motor launches that sped day trippers past us to witness the pods wherever they had been spotted last.

Then salvation arrived. Just short of Telegraph Cove, a boat slowed as it passed our bedraggled fleet. The Good Samaritan at its helm informed us that a pod of orcas was only a mile behind, and headed our way. We turned and waited, peering anxiously into the gloom. Half an hour elapsed. Our spirits began to deflate once more. But then we saw them – seven orcas swimming up the middle of the channel, rising and falling gracefully from the water, as if to flaunt their black and white markings. Smoky columns of moisture whooshed from their blowholes, their dorsal fins slicing through the water.
Paddling hard, we stayed abreast of those majestic creatures for the best part of an hour. We revelled in their proximity, giving silent thanks that we were at their level and in their element rather than passively observing from some intrusive tourist boat. We forgot the cold and wet. We were thrilled, exhilarated and thoroughly elated. Even the greyness of the day, the utter lack of any primary colours, suddenly seemed magnificently atmospheric.

With an exuberant final flourish the leading whale slapped its great tail five times on the surface of the water, and then they were gone, heading who knows where. We turned for home, our mission accomplished, all gripes forgotten, and a palpably relieved Mel out in front. We had travelled thousands of kilometres and waited six whole days, but to see one of nature’s most magical sights made it feel like time well spent. All it took was a little patience.

Main Image: A female orca breaches in front of another killer whale (Shutterstock)