Off-grid, low-key, and genuinely off-the-beaten track. If you’re drawn to the wild, uninhabited landscapes proffered in old adventure books you should be dust-tailing to South Africa’s Northern Cape...

A certified biodiversity hotspot, botanists, naturalists and geologists have explored South Africa's Northern Cape for decades, but a pin hasn’t yet been dropped by the masses. The region's relatively few international visitors journey there to enjoy the rare, wild wonders; and its remote location is an easy trade-off for the many rewards of solitude. You'll wake with a striking dawn chorus, race ostriches through desert on white-knuckle 4WD rides, sip sundowners by the sea with just a campfire for light, and retire with the gentle chirping of insects and the rumbling South Atlantic.

The Northern Cape is dominated by the Namaqualand region, world-famous for its spring-time floral frenzy of wildflowers and flowering succulents. In the north, the province shares Namibia’s famed red dunescapes and granite outcrops. Heading south towards the Western Cape, the region’s reds relax to swathes of green, its sudden verdancy a reminder of South Africa’s astonishing natural diversity.

Read on to discover some of the Northern Cape’s most treasured wild wonders, and other highlights... 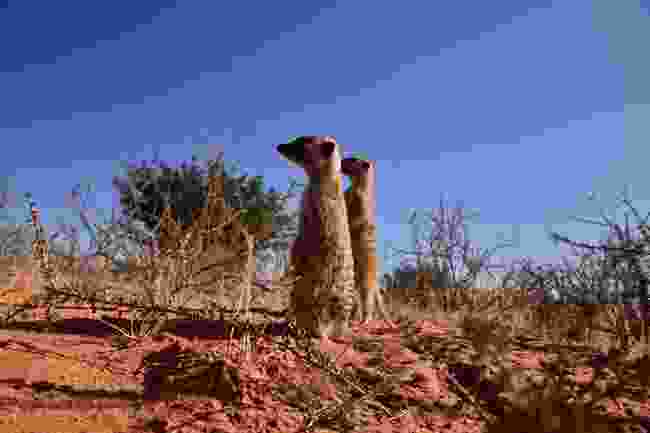 Hogging the limelight, Africa’s emblematic ‘Big Five’ are often the first point of call for wildlife lovers. Small, meek, but completely charming are the Northern Cape’s ‘Shy Five’ - the aardvark, aardwolf, bat-eared fox, meerkat and porcupine. These wonderful creatures shun the spotlight; dawn and dusk walks through scrubland offer the best chances to see them at close range.

As well as the Shy Five, you can expect to see countless ostriches scurrying along the horizon at speeds of up to 70km. A blur of brown indicates a female, while billowing, glossy black and white plumage indicates a male.

Tall, spiralled antlers protruding from shrubs and grasses reveal a herd of grazing oryx, or gemsbok. These elusive antelope were once numerous across the plains, but recent prolonged droughts and a subsequent lack of vegetation have devastated their numbers. While their numbers might not be as numerous as they once were, they do still roam wild and are easy to identify. 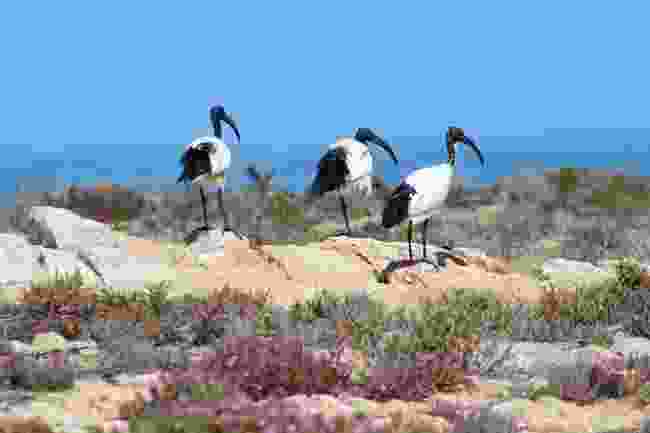 Shrouded in mystery and rich with intrigue, the Northern Cape’s 200km coast is locally known as the Diamond Coast on account of its turbulent diamond mining industry. Miles of fine, white sand beaches, dunes and inlets repose beside the wild South Atlantic; white-fronted sandplovers dart to and from the shore pecking insects from sea foam; large whale bones and natural marine debris are strewn along the shore untampered with, while African sacred ibis (pictured) glide overhead. An accidental nature reserve, much of the coastline has been protected by its restricted access status; large areas have been privately owned by diamond mining corporations for many years. Undoubtedly among the coast's many highlights are the shipwrecks: the Brazillian SS Piratiny, the British MV Border and the Cypriot SS Arosa. Their rusted remains can be explored along the coast, each with a fascinating history.

Coastal tours to the restricted-access areas, including visits to the shipwrecks and sand dunes are possible with an approved tour operator, such as Namaqua Coastal Tours.

3. The botanical wonders of Namaqualand 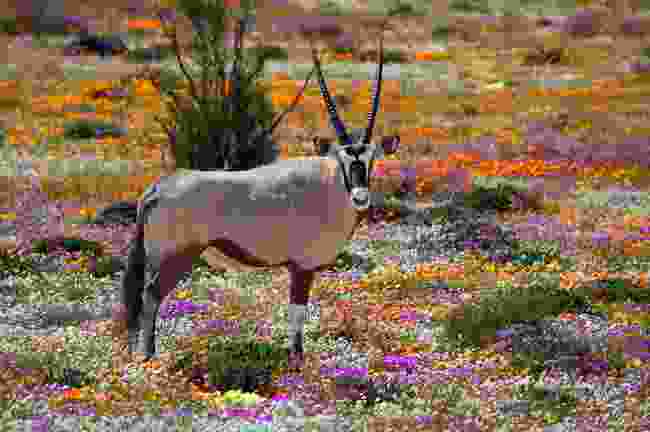 An oryx amongst the wildflowers in Namaqualand (Dreamstime)

The semi-arid region of Namaqualand is a recognised biodiversity hotspot, home to around one-third of the world’s succulent species. Its incredible diversity is on account of its climate, in a unique ecological biome termed the Succulent Karoo. The flora relies upon hot, dry summers, followed by cold winters with very little, but vitally important rainfall. When the previous year’s conditions have been ideal, a kaleidoscope of wildflowers and flowering succulents burst from sand and granite in the South African spring, which runs roughly from July to October. Some 3,500 species including over 1000 endemic species can be spotted in the region.

Droughts have dimmed the floral spectacle over the past couple of years, however thanks to a dedicated flower hotline (yes - there's a dedicated flower hot line!), you can check conditions have been favourable ahead of your visit; the number to call is +27 (0)72 938-8186. The real plantaholics out there can make a beeline for the Hester Malan Garden in Goegap Nature Reserve, which has a wealth of information about the area's rich flora.

4. Fire up a braai and sip pinotage beneath the stars 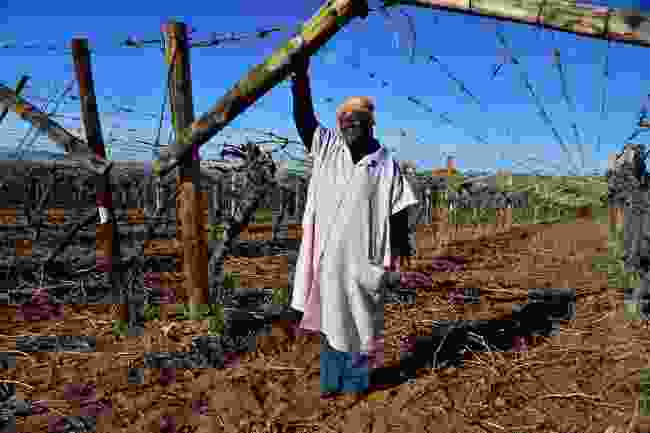 When night falls in the wilderness there's no better place to be than around a campfire with friends, indulging in the light, warmth and grilled goodies of a real South African barbecue, or braai. Inky-black skies studded with stars stretch overhead without a spot of light disturbance; just the embers of the coal and flame of the fire on the chilly nights. If you’re feeling brave you could try eating a smiley - a cooked sheep’s head - a favourite in South Africa. It’s so-named because when the sheep’s head begins to sizzle in the fire, the mouth is pulled back and warped into a smile. Don't squirm - while for many of us this is too much of a confrontation between man and meat, in South Africa this shows the utmost respect to the slaughtered animal - not a shred goes to waste.

You couldn’t visit South Africa without drinking a glass of its world-famous wine, and the Northern Cape produces its fair share. Acres of vineyards will race past you on the road to the west from Upington; their lifeblood the Orange River snaking its way to the ocean. Head to the Orange River Cellars in Upington, the Douglas Wine Cellar in Douglas, the Bezalel Wine & Brandy Estate in the Green Kalahari, the Die Mas vineyard in Kakamas, or the Hartswater Estate in Kimberley for local blends and vineyard tours. 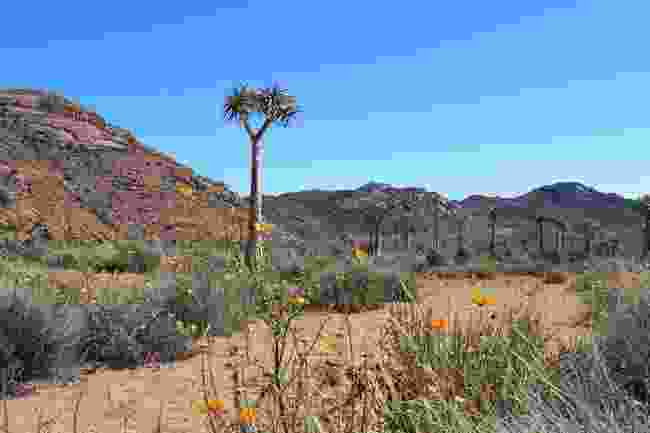 The Northern Cape is famed for its indigenous quiver trees (Aloidendron dichotomum), locally known as kokerboom. Throughout the world the tree can only be found in the Northern Cape and in southern Namibia; indeed its fame is attributed in part to the fact that its natural range is extremely limited, and its cultivation outside of the range unyielding. Not only is the tree a mascot for the region, its materials and emblems are rooted in local culture too. Its hollow, tubular branches have traditionally been used by the San people (Bushmen) to craft quivers for their arrows (where the name 'quiver tree' comes from!), and as a material in hut-building.

By far the best place to see them in the Northern Cape is in Nieuwoudtville, where the conditions are so ideal for this fine-tuned species that a quiver tree forest has formed over hundreds of years. Don't be tempted to take a seed home to try your hand at growing them; these plants are protected under South African law.

6. Visit the national parks and reserves 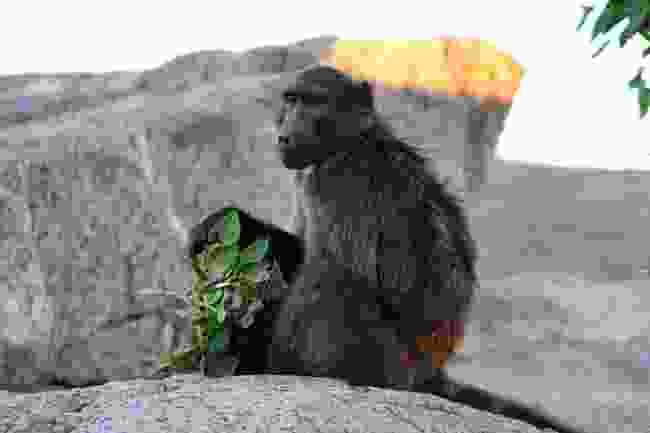 The Northern Cape is home to more national parks and wildlife reserves than any other South African province; Augrabies National Park, the Richtersveld Transfontier Park, Namaqua National Park and Kgalagadi Transfontier Park being the most popular. Each park has its own wild allure; admire vibrant wildflowers carpeting the foothills of the mountainous Richtersveld, spot myriad inland and coastal bird species in Namaqua National Park, or search for black-mane lions, leopards and hyenas in Kgalagadi.

For those who love to indulge in curiousities, head to Augrabies National Park, where jagged cliffs hurl the Orange River over a 200ft gorge to form the colossal Augrabies Falls; named after its thundering boom (Augrabies is derived from a phrase meaning 'noisy place'). The diamond-rich river is said to harbour a hefty deposit of diamonds in the swirl-hole created by the waterfall's cascade; fortune seekers have lost their lives in pursuit of its riches. Diamonds aren't the parks only riches - if you're lucky you'll spot leopards and giraffe, and you'll certainly be able to observe chacma baboons relaxing on the granite outcrops. 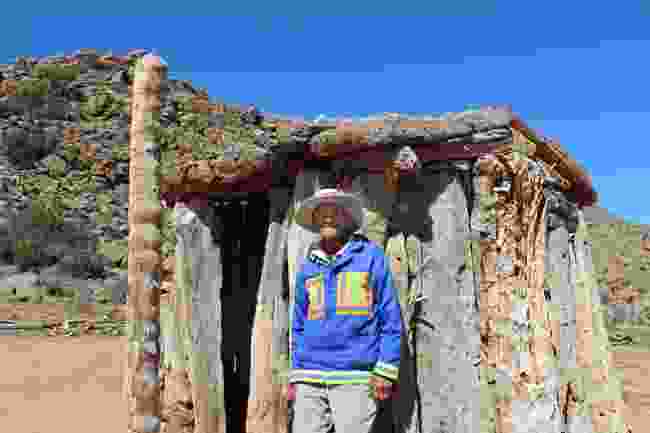 Humans have inhabited the Northern Cape for many thousands of years. Before Europeans colonised Namibia and South Africa, the majority of people in the Northern Cape belonged to the Nama and San tribal groups. Over the years, through fierce oppression and loss of land the groups are much diminished, and have dispersed to form several other subgroups, which include those who settled as miners, farmers, runaway slaves or missionaries from other regions.

The Nama (also known as the Nama-qua which translates to Nama people) are a nomadic people, living in southern Namibia, the Richtersveld and Namaqualand regions of the Northern Cape, whereby the San (also known as Bushmen) are hunter-gatherers, occupying various parts of the province. Today, the livelihood, culture and status of these threatened communities are safeguarded by the South African government and non-government organisations. A part of the Richtersveld is dedicated to the preservation of the Nama people - you can find out more about the people, and organise a visit that contributes to their way of life through the Richtersveld Transfontier Park. A visit to these communities will reveal to you the ways in which culture, tradition, and the natural landscape are interlaced. Herbal medicine forms an important part of Nama culture; kankerbos (cancer bush) has been used for centuries in the treatment of cancer and other maladies. Similarly, the San group uses the poisonous sap of gifboom (poison tree) to tip their hunting arrows.