Take a road trip through the wilds of West Texas for stirring beauty and southern comfort. Britt Collins reveals the places you must visit... 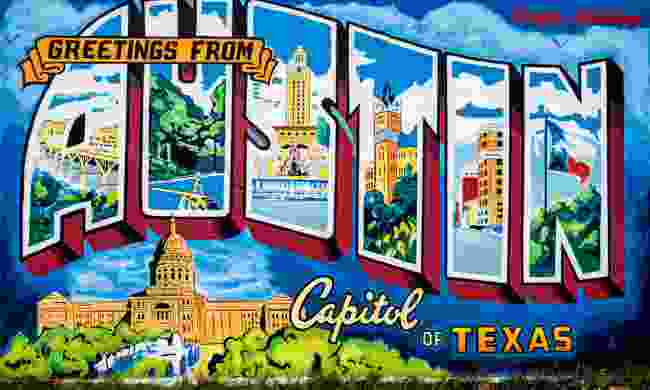 Austin is not only home to South by Southwest, but its sultry climate, legendary music scene, innovative art and culinary culture make it the most happening city in America. For first-timers, spend a night along the leafy tuck-away Rainey Street, Austin’s cocktail row of renovated bungalow bars and speakeasies with string-light patios. Walton’s Fancy & Staple, a whimsical deli/bakery/flower shop mash-up with an old-fashioned general-store ambience, is heavenly for sampling southern staples of cornbread, mac-and-cheese, grits-and-greens. Catch dinner-and-a-show at the gorgeously retro Violet Crown cinema-café. The vegan coffee ice cream is worth coming for alone.

At sunset, watch the wonder of a million bats fill the downtown skyline from under the Congress Avenue Bridge. Cocooned between cliffs, canyons and hills, the Bat City has incredible green spaces: rent a kayak or canoe and drift around Lady Bird Lake, or hit the scenic hike-and-bike trails of Barton Creek or stop for a picnic and get a glimpse of local life.

It’s impossible to leave Austin without hitting the city’s most-loved music venues The Continental Club, the fabled rock club where the action’s happened for six decades; Antone’s that’s been home of the blues since 1975, hosting luminaries like Muddy Waters and BB King; and Mohawk, a unique indoor-outdoor space showcasing everything from indie-rock to hip-hop and offbeat events such as wrestling and drunken spelling bees. 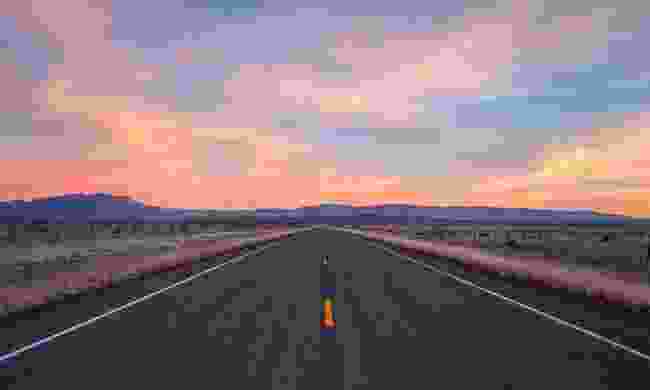 There’s an old saying, ‘when you leave Austin, you enter Texas’. The stark beauty and unpretentious charms of tiny, one-stoplight Marathon has long been a favourite pit-stop for road trippers. Check in at the Gage Hotel, a handsomely restored Mission-style property burrowed in the dramatic setting of the Chihuahuan Desert for authentic laid-back luxury. Choose from 45 rooms in the mansion, three casitas or the grand former home of Marathon founder sea captain Albion E. Shepard. Have drinks at the hotel’s acclaimed White Buffalo Bar and dine under the stars at the glorious 12 Gage open-air restaurant, serving the finest locally sourced food for miles.

Around the corner, you’ll find Eve’s Garden, an eclectic bed-and-breakfast, a vivid creation of local artist Kate Thayer. The rambling house is filled with western antiques and folk art, and a courtyard, blooming with roses and bougainvillea, where she hosts art shows and music concerts along with community potluck dinners or happy hours. A few blocks beyond the railroad tracks, wander the Gage Gardens, a hidden wildlife haven in a dusty strip with ponds, a rose garden and fruit orchard. 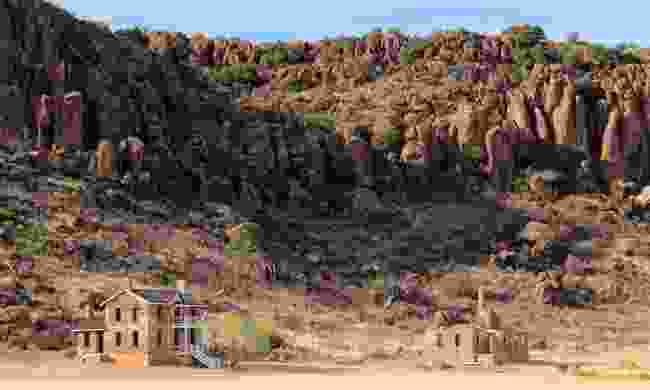 Lying in foothills of the Davis Mountains, Alpine is more than a stopover to Marfa. The friendly, folksy college town has attracted an influx of artists and academics. The historic Holland Hotel’s Century Bar & Grill is the town’s main watering hole, dishing up good rustic food and live music in a moodily-lit romantic setting of a back patio. The strip along Holland Avenue fizzes with inviting cafes, homespun boutiques, art galleries and artisan food trucks while maintaining an authentic sense of community. Judy’s Bread & Breakfast is a lovely place to lay your head and linger. The diner-style menu features classic cowboy omelettes and freshly baked cinnamon rolls. Railroad Blues, an iconic roadhouse beside the tracks, continually buzzes with a steady stream of blues, country and rock bands and where strangers will buy you a beer and you can dance the night away.

Sneak a little Texas culture at the Big Bend Museum, which is filled with fascinating artefacts, fossils and ancient maps telling the natural and human history of the region. Perfectly situated to Big Bend National Park and Fort Davis, Alpine provides a great hub for adventures and day trips. The beauty of the high desert is not just in the stirring landscapes, but the skies. Join the McDonald Observatory’s Twilight Parties in Fort Davis and gaze through telescopes for a glimpse at the moon, stars and Jupiter. 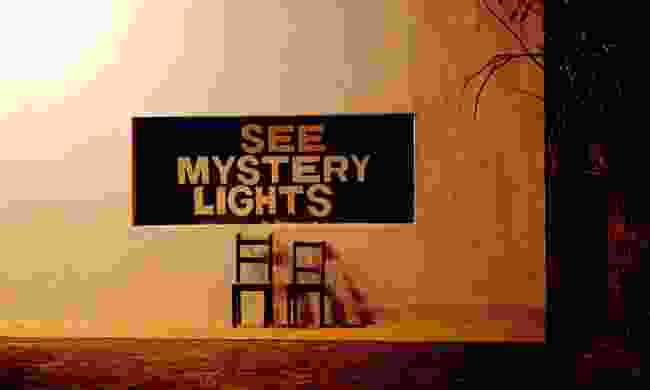 Ever since New York artist Donald Judd arrived in 1972 and planted his minimalist sculptures in the desert, the sleepy little cow town blossomed into an international art oasis. The storied Spanish-revival Hotel Paisano where James Dean and Elizabeth Taylor stayed while filming Giant in the 50s, still attracts visiting celebrities. Its courtyard, opulent and charming, is hotspot for dinner and fresh-lime margaritas around the sparkling fountain. Sleep closer to nature in El Cosmico’s vintage trailers and teepees with wood-fired hot tubs and a shaded grove of hammocks. The retro-cool Thunderbird motel, the centre of Marfa-hipness, where the rooms come with vinyl records, has fab brunches and a buzzy pool.

Planet Marfa, an offbeat open-air bar decorated with twinkling string lights and kitschy treasures, serves beer, wine and authentic Tex-Mex food and has a warm, laid back atmosphere. Tour Marfa’s newest star attraction, the 10,000-square-foot installation at Judd’s Chinati Foundation, a disused military fort-turned-modern-art museum. For those who don’t have a whole afternoon to burn at the Chinati, The Marfa Ballroom, a non-profit arts hub in a converted ballroom, is a brilliant alternative to see art, hear music, and listen to readings by renowned authors. Head to the outskirts of town on Route 90 and seek out Marfa’s mystery lights. 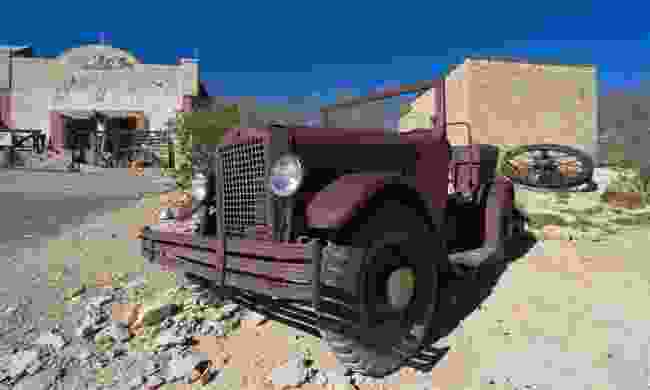 On the Mexican border, Terlingua is where people go to escape. The tiny semi-ghost town, an old mercury-mining settlement, is the last outpost for drifters and dropouts and one of the remotest, harshest, quirkiest places on earth. An evening on the long porch of the Terlingua Trading Company marvelling at the cinematic views and listening to the colourful stories from the locals, who “come out” to smoke and sip beer as the sun goes down, has its own magic.

Next door the Starlight Theatre Restaurant & Saloon, a former movie palace that hosted stars Willie Nelson and the Flatlanders, serves Tex-Mex classics and prickly-pear margaritas. It’s plenty lively with bluegrass and country music acts, cowboys and a renegade crew at the bar. There are a few lodging options: rustic cabins, a ghost town inn or airstream glamping at Tin Valley Retro Rentals.

We chose a vintage pirate ship, nestled in the middle of the rugged Terlingua Creek badlands. Ronda, the owner, painstakingly restored derelict buses, boats, teepees and turned a little patch of desert into a soulful hideout. Wonderfully isolated, there’s nothing to do, but to hang out with Rhonda and her family of rescued dogs, cats and kittens and an entertaining burro named Sampson, or revel in the solitude beneath the spill of stars across the black West Texas night. 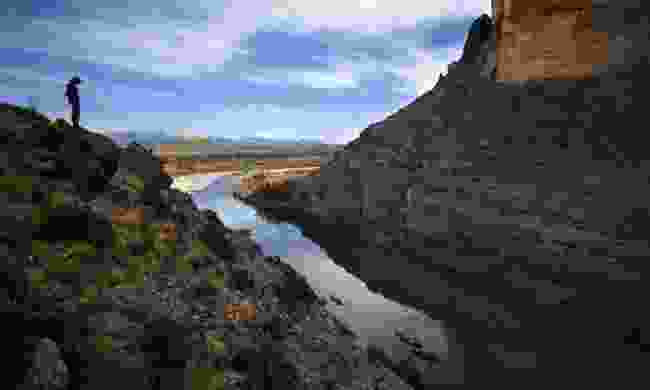 As you roll west on US 90 towards the Big Bend, you can’t begin imagine the otherworldly desert wilderness many don’t know exists. Named for a curve in the Rio Grande River, it’s one of the largest but least-visited US national parks and can feel like you have the whole world to yourself.

The rugged and remote expanse of limestone canyons, forested mountains, arid plains and prairie grasslands is home to coyotes, cougars, bobcats, bears and all sorts of wild creatures. It’s best explored during the spring months when the desert wildflowers are in bloom and there’s a greater chance of wildlife encounters. Campers are allowed to stay for 14 consecutive nights, in an effort to protect the delicate desert ecosystem.

Aside from the campsites, the only place to stay in the park is the motel-style Chisos Mountain Lodge high mountain basin. This adventurer's paradise has hundreds of miles of curving trails and backcountry roads for scenic drives, hiking, camping, mountain biking, horseback riding, bird and wildlife watching, and hot springs for soaking and rafting or canoeing down the Rio Grande.

northamericatravelservice.co.uk offers an 11-night West Texas fly-drive from £2,359 per person (based on two adults), including flights, car hire and accommodation in Austin, Marathon, Alpine, Marfa and Big Bend National Park.