From Saharan dunes and high peaks to manic medinas and spice souks, Paul Clammer reveals how to get the most out of marvellous Morocco

Morocco has been a kingdom for centuries, and a succession of dynasties has left it with a storied succession of imperial centres of power: Marrakech, Fès, Meknès and current capital Rabat. However, start in Morocco’s modern commercial hub: Casablanca.

It’s not quite the dream city of black-and-white movie fame, but the architecture is the big draw – the city is the home of Mauresque: French art deco mixed with traditional Islamic motifs. While you’re looking up at the buildings, you won’t fail to miss the 210m-high minaret of the Hassan II Mosque. Tours are offered – it’s one of the few Moroccan mosques that non-Muslims may enter. Rabat is worth a diversion, for its ancient kasbah overlooking the coast and fancy restaurants. However, the time-poor should carry straight on to overlooked Meknès, with some of its grandest imperial architecture still standing, including the mighty gate of Bab Mansour and the Heri es Souani (subterranean granaries).

Meknès is also the gateway to an even older capital, the ruined Roman city of Volubilis, and the town of Moulay Idriss next door, named for the ruler who brought Islam to Morocco; his shrine is an important pilgrimage site.

If Rabat is Morocco’s political capital, and Casablanca is its business centre, the country’s spiritual heart is found in Fès. The city’s old medina is a mesmerising maze of endless alleys and blind turns, impenetrable to cars (though watch out for mules and donkeys). 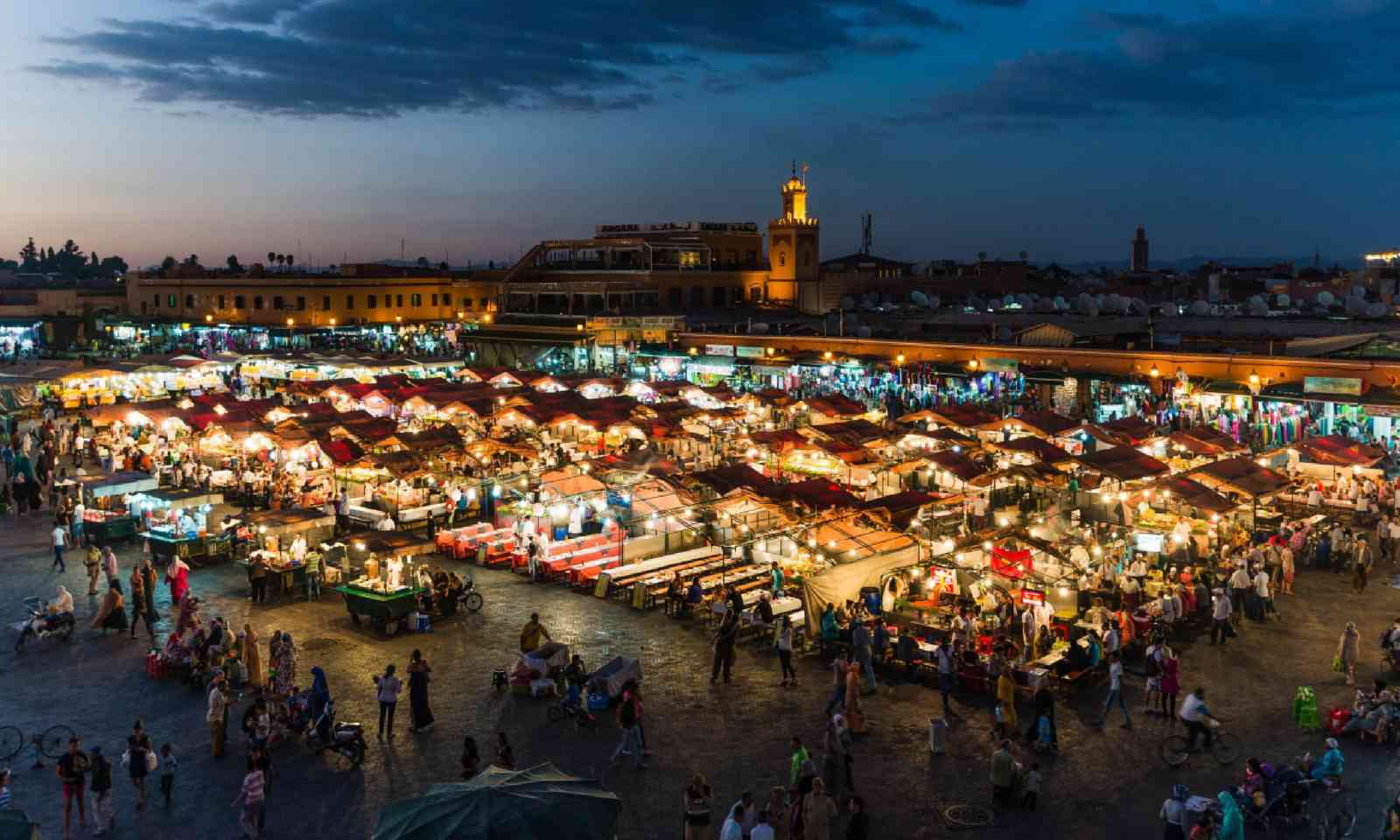 Hidden in its lanes are celebrated mosques, pungent leather tanneries and hole-in-thewall workshops producing traditional crafts. Do explore and don’t be afraid of getting lost at least once. Fès has also carved a name for itself as a festival city: the Sufi Festival (April) and Sacred Music Festival (May) are both worth planning your trip around.

Finally, all roads lead to Marrakech, the city that once took in caravans from across the Sahara. These days the trade is in tourism: it was here that the riad was fi rst born. But the hustle is mostly goodnatured. The street theatre of the Djemaa el-Fna is where the action is. Alternatively, fi nd calm in the shadow of the Koutoubia Minaret or the Yves Saint Laurent-designed Majorelle Gardens, before heading out to dine in Marrakech’s gourmet restaurants.

Morocco has a staggering 1,835km of coastline; the entrepôt of Tangier guards the Straits of Gibraltar, which links the two. Crossing the straits from Spain is a classic way to enter Morocco, although these days ferries sail to the new Tangier Med port some 45km east of the city rather than docking at the foot of the medina. However, the city still bears traces of its libertine days as an international zone, not least the fascinating American Legation Museum, which documents Tangier’s history.

Less than an hour’s train ride away is the old port of Assilah, where the Atlantic air and whitewashed walls have provided inspiration for a small artist colony. Not content with sticking to canvas, Assilah literally covers itself with art during its festival (July), giving its walls over to murals and other street art. 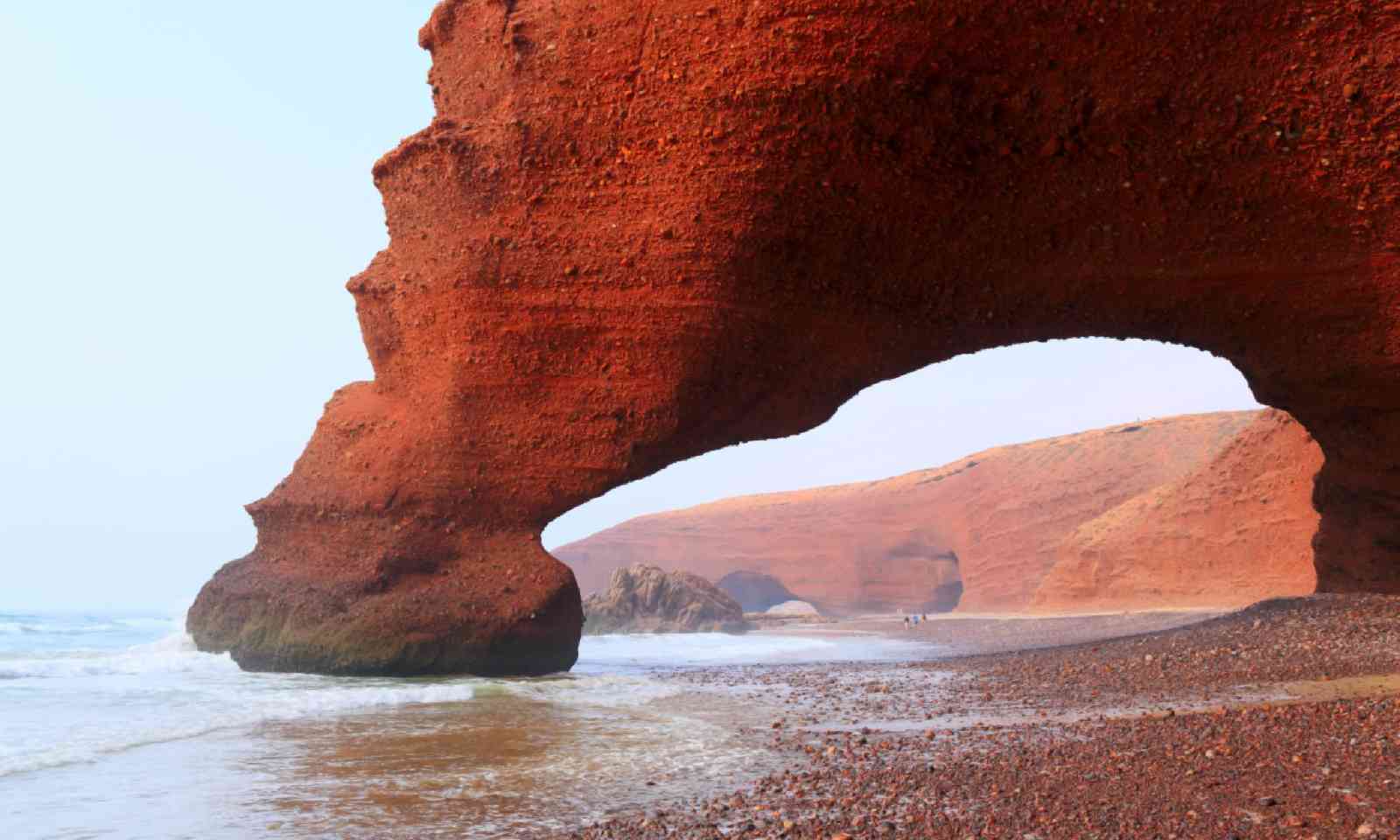 Casablanca now looks more away from the sea rather than towards it, so when train line cuts inland, continue south by road to break the journey with a stop at Oualidia – a seaside village famed for its oysters, sold straight off the boats and guzzled on the beach with a twist of lemon.

Then continue on to the fishing port of Essaouira; buttressed with Portuguese ramparts, it’s another centre for Moroccan artists and offers some charming riads to stay in. 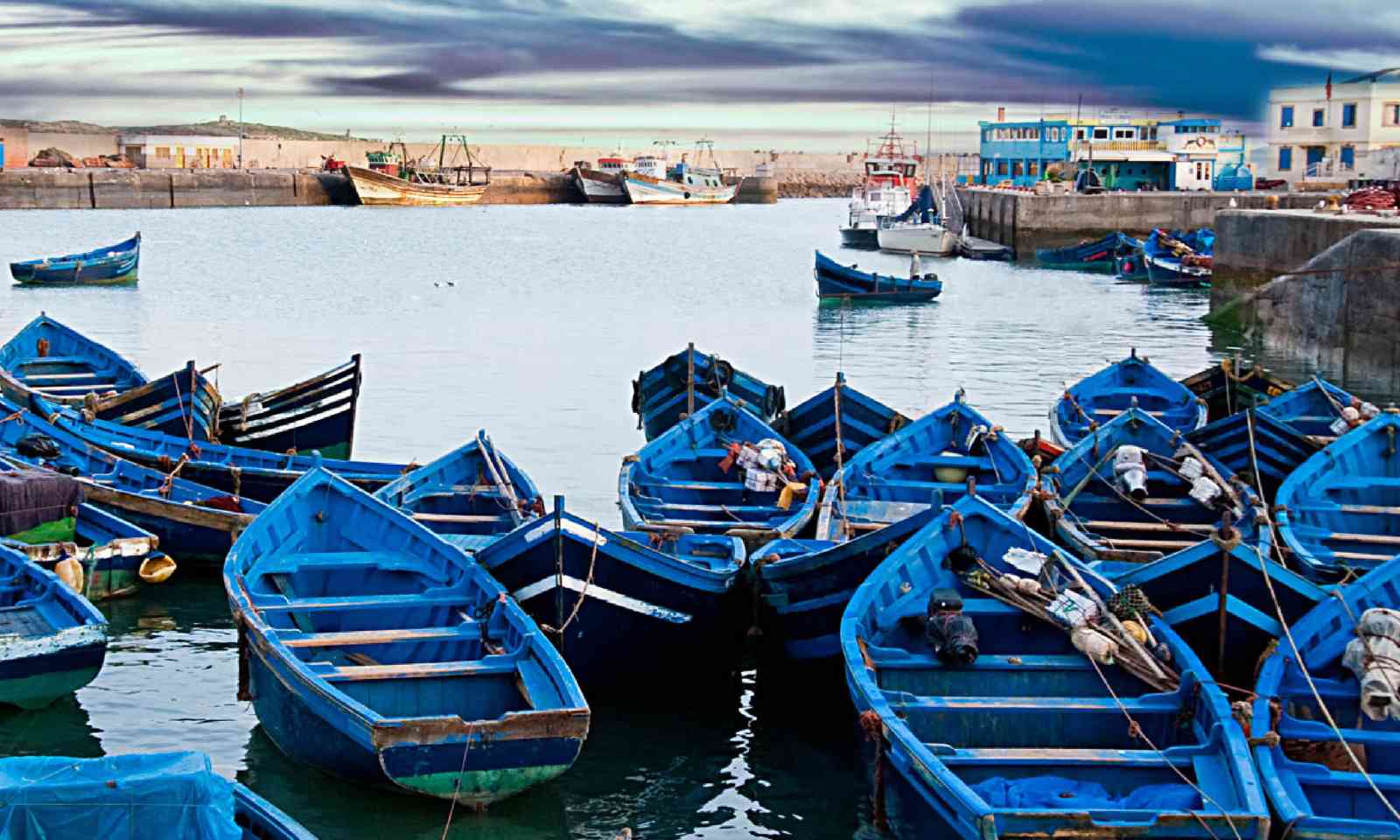 Eat the catch of the day, freshly grilled up in the town square, then walk the ramparts or the wide beach (spectacular at sunset). Essaouira also dubs itself the ‘windy city’, and there’s no shortage of kiteboarding and windsurfing options, either on the town beach or 25km south at the surfers’ village of Sidi Kaouki.

To experience the best of the Atlantic coast, continue south towards Sidi Ifni, which is strewn with Spanish art deco architecture. The beaches are wild and rugged here, with the red sandstone arches at Legzira Plage providing a dramatic finale.

Few things say ‘North Africa’ quite like the Sahara. In Morocco, when the ridges of the Atlas Mountains finally fall away, this great ocean of sand takes over. Ouazazarte is the best launch pad for a trip into the desert. It’s home to the Atlas Film Studio, the hub of Morocco’s film industry; the magnificent kasbah of nearby Aït- Benhaddou – something of a movie star itself – is well worth a short diversion. 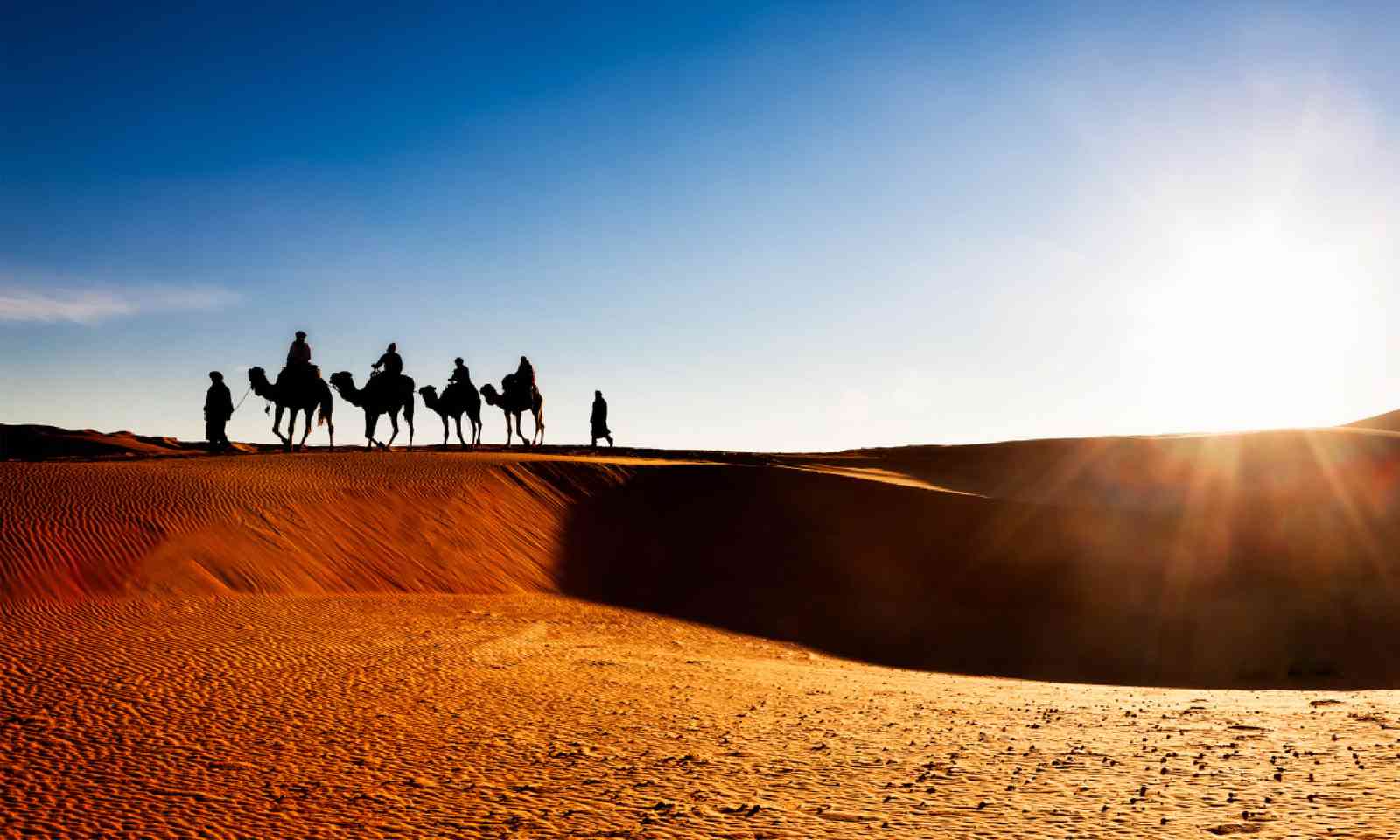 From Ouarzazate, head south down the Drâa Valley, where the landscape becomes increasingly arid and rocky, and the only splashes of green are the carpets of palm groves that crop up whenever water is plentiful. At the head of the valley is Zagora, staging post for organising camel treks into the desert.

The main attraction is a three-hour drive away, at Erg Chigaga. These are the giant sand dunes of your dreams, sculpted by the wind and changing colour throughout the day, from gold at dawn to peach at sunset. Guides delight in wearing Tuareg-inspired blue robes, and will have you wrapped up in a shesh (headscarf) and on top of a camel before you can say Lawrence of Arabia. 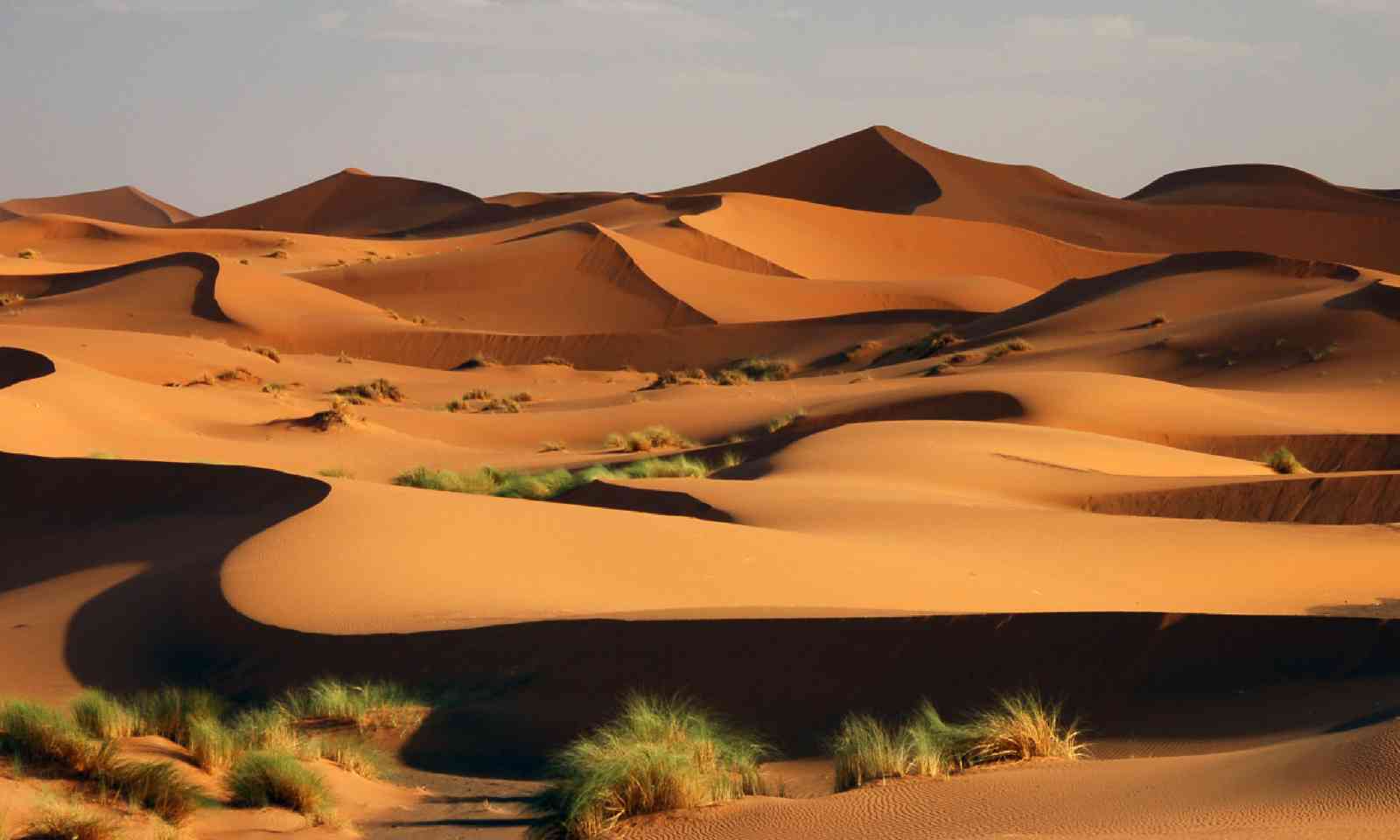 If you’re travelling south from Fès, a good alternative is to head towards Morocco’s other great dunes at Erg Chebbi, via the bluffs and gorges of the Ziz Valley and the desert town of Erfoud.

Arrange your camels at Merzouga, but time your visit well: paved roads (and coach trips) have reached this once-sleepy hamlet, so travel in the winter when tourism is lightest, or be prepared to head further into the desert to escape the crowds.

Four mountain ranges ripple in waves across Morocco from the sea to the Sahara. The Rif Mountains rise from the Mediterranean shore, before subsiding into the plains of the north. Next it’s the turn of the Middle Atlas, which draw breath only to give way to an even higher and more rugged range – the High Atlas.

When the High Atlas begin to peter out, the Anti-Atlas take over, presenting one last bastion before the desert begins. All off er the chance for exploration – from day hiking to hardcore trekking. 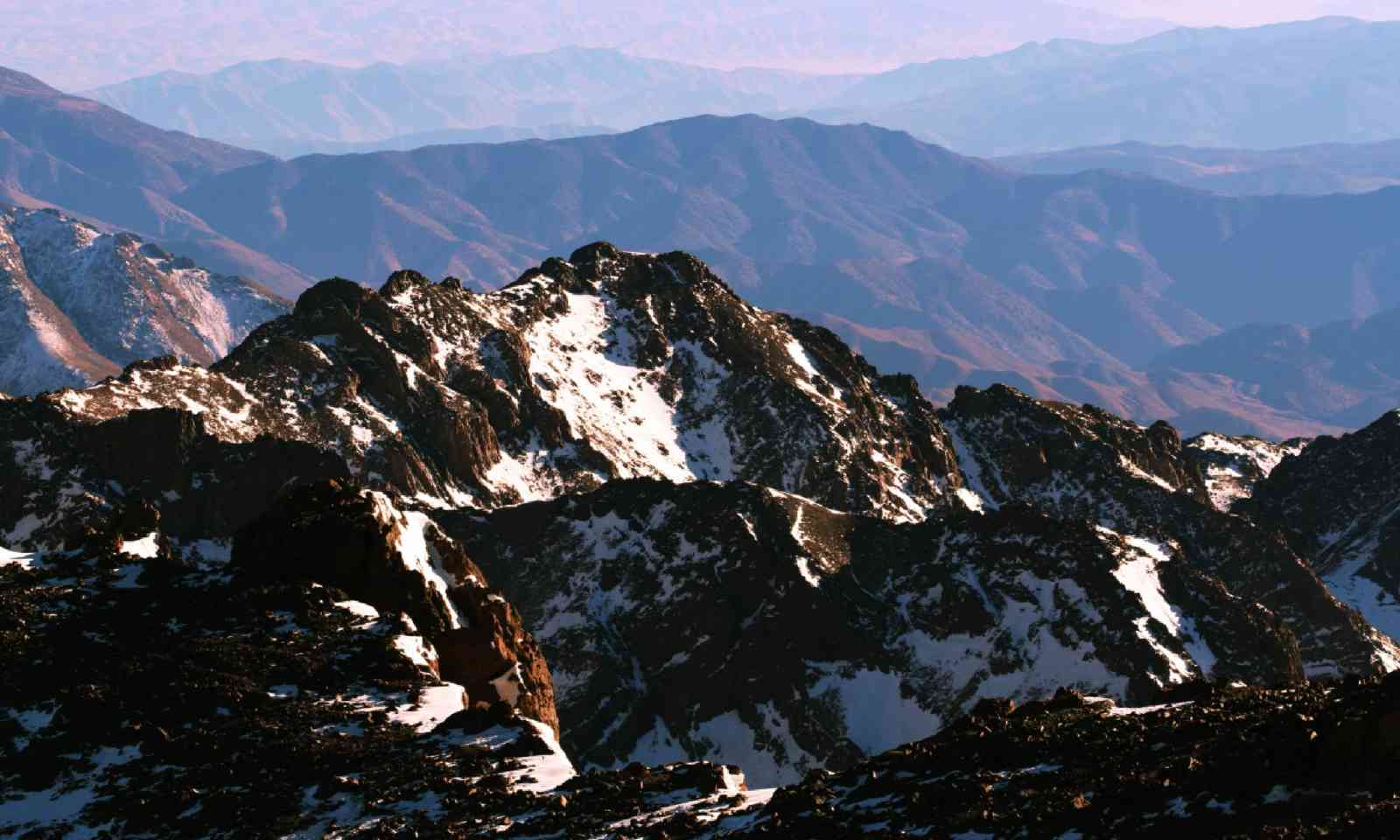 Marrakech is the perfect entry point for the High Atlas mountains. Top of many people’s lists is Mount Toubkal (4,167m), North Africa’s highest mountain. It’s not a technical climb, but it takes two days, starting at the Berber village of Imlil and staying overnight at a mountain refuge.

The route up Toubkal is marked and popular, but you’ll need a guide if you opt instead for a seven-day circuit around the peak; you’ll trek with mules and camp in the remotest parts of the range. April to June are the favoured months, with the best weather and prettiest wildflowers. 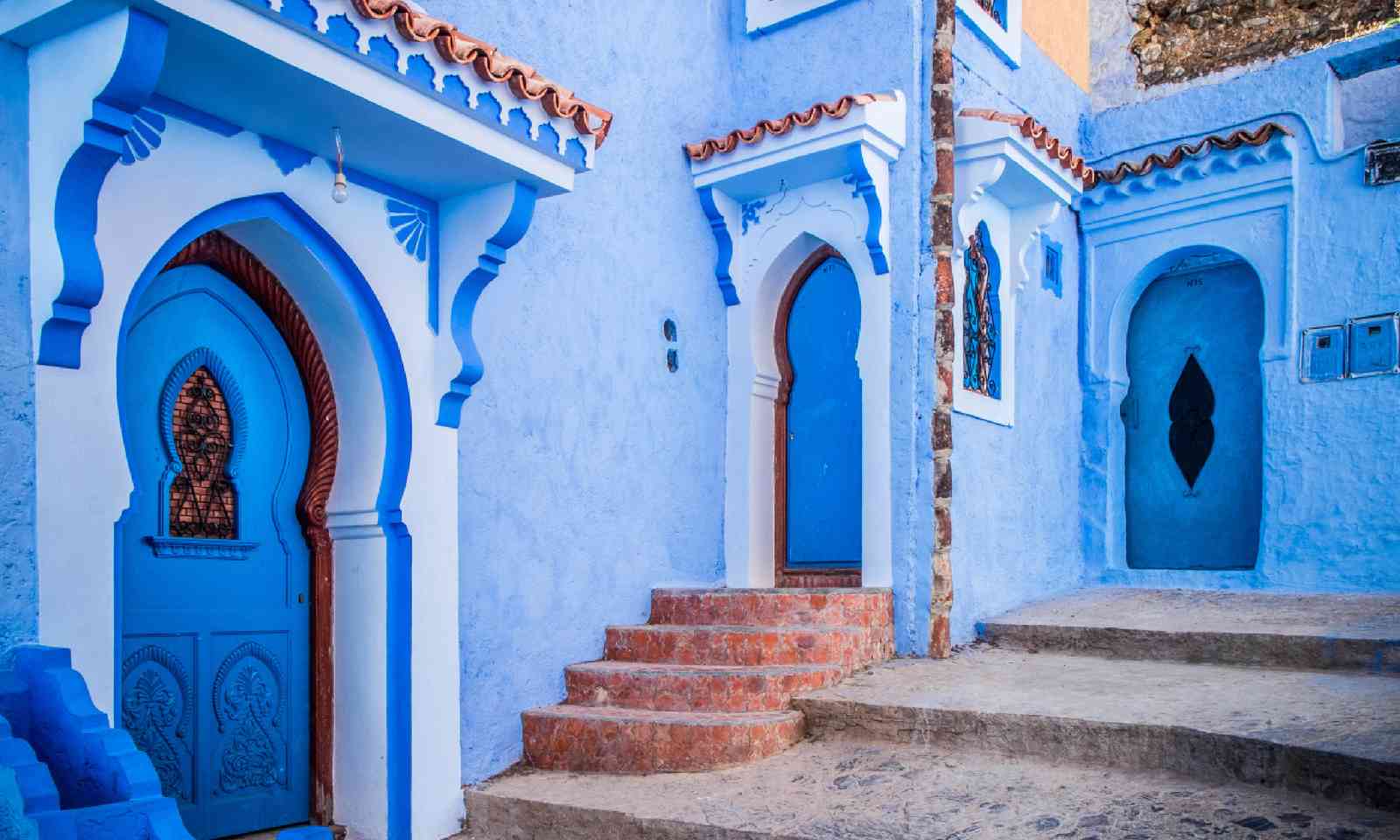 In the Rif, the blue-washed town of Chefchaouen is the ideal base from which to head into the mountains. The peaks are gentler here, but you’ll likely have the slopes of Talassemtane NP to yourself.

There are plenty of day hikes, but those looking for something more long distance should try the five-day trek to Bab Taza, via the weird geological formation of God’s Bridge. You might spot Barbary apes – Morocco’s only non-human primate, and cousin to those that live on Gibraltar.