British photographer Martin Parr on British seasides, Saddam Hussein watches, zip-lining with Mormons and being on the receiving end of criticism

What’s the strangest situation you've ever found yourself in with a camera?

Last year, I went to a Mormon community and there was this guy with 16 wives. After photographing him with his two wives and 16 kids, we went out zip-lining. That was pretty weird.

Is getting into those bizarre situations part of the appeal of being a photographer?

Every day is different when you go out shooting. There’s never a dull moment.

I’m a very inquisitive, nosey person, so the great thing about photography is that you can justify your presence anywhere and see what’s going on in the world through other peoples’ eyes. That’s the greatest use that photography can offer.

Do you like to get into interesting places and explore cultures?

Yes. I want to find out what’s going on. If you’ve got a camera, you’ve got an excuse to go anywhere.

Travel photography often focuses on cultures from exotic faraway lands. Are the British, which you often photograph, underrated as photography subjects?

The Brits are pretty exotic themselves. They wear strange uniforms. They dress up in ritualistic stuff. I’d say they’re in the Top 10 of exotica. 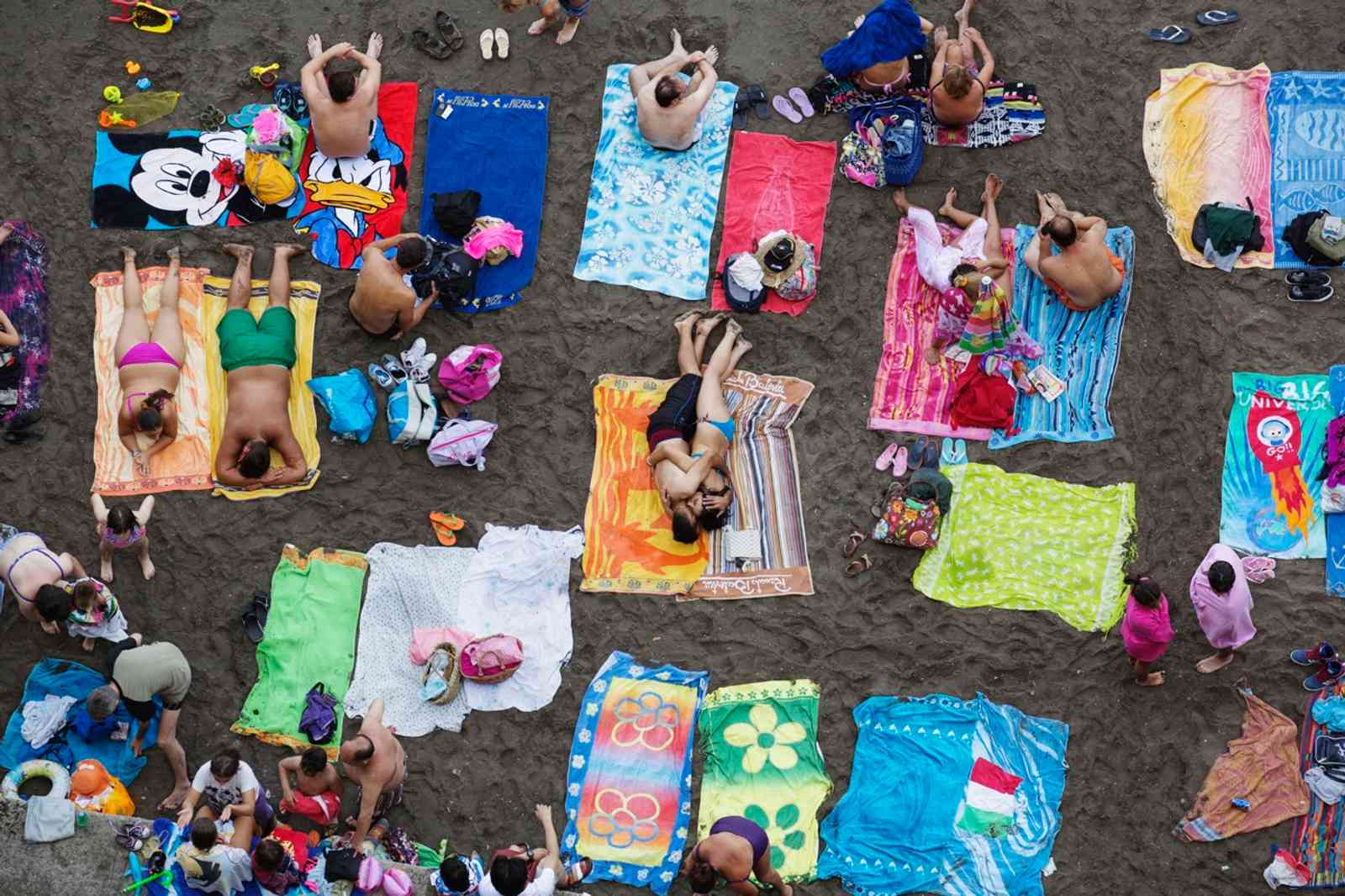 There’s a beach photo of yours (above) from Sorrento, Italy, taken from above. Are you prepared to go to great lengths to get the photo?

In that particular case, I just put the lens over the cliff. I wasn’t abseiling down or anything.

I go to interesting places that are easy to get on with. My subject matter is the Western world. That’s what interests me most of all and that’s really what I pursued consistently over the last 45 years.

Do you carry a camera with you everywhere, or do you enjoy being off-duty?

I’m always looking. But I’m either working properly or not at all.

Do you have any favourite parts of the world to photograph?

I’m fascinated by China but I don’t love China.I do love Japan. That’s a great country and I like to photograph the food. In Europe, I’m very fond of Italy. I always like Ireland. Perhaps most of all, I like photographing in the UK, because I know it so well.

Do you have any particular favourite spots in the UK?

I’m obsessed with Scottish islands. I’ve been to most of the inhabited islands off Scotland. They’re always good to photograph in. There’s something very romantic about the islands that always attracts me.

I also love the seaside. I cannot get enough of the British seaside. For me, it’s got the right elements of depression and colour and upbeat jollity, so it’s full of all the contradictions you can find in modern British life. 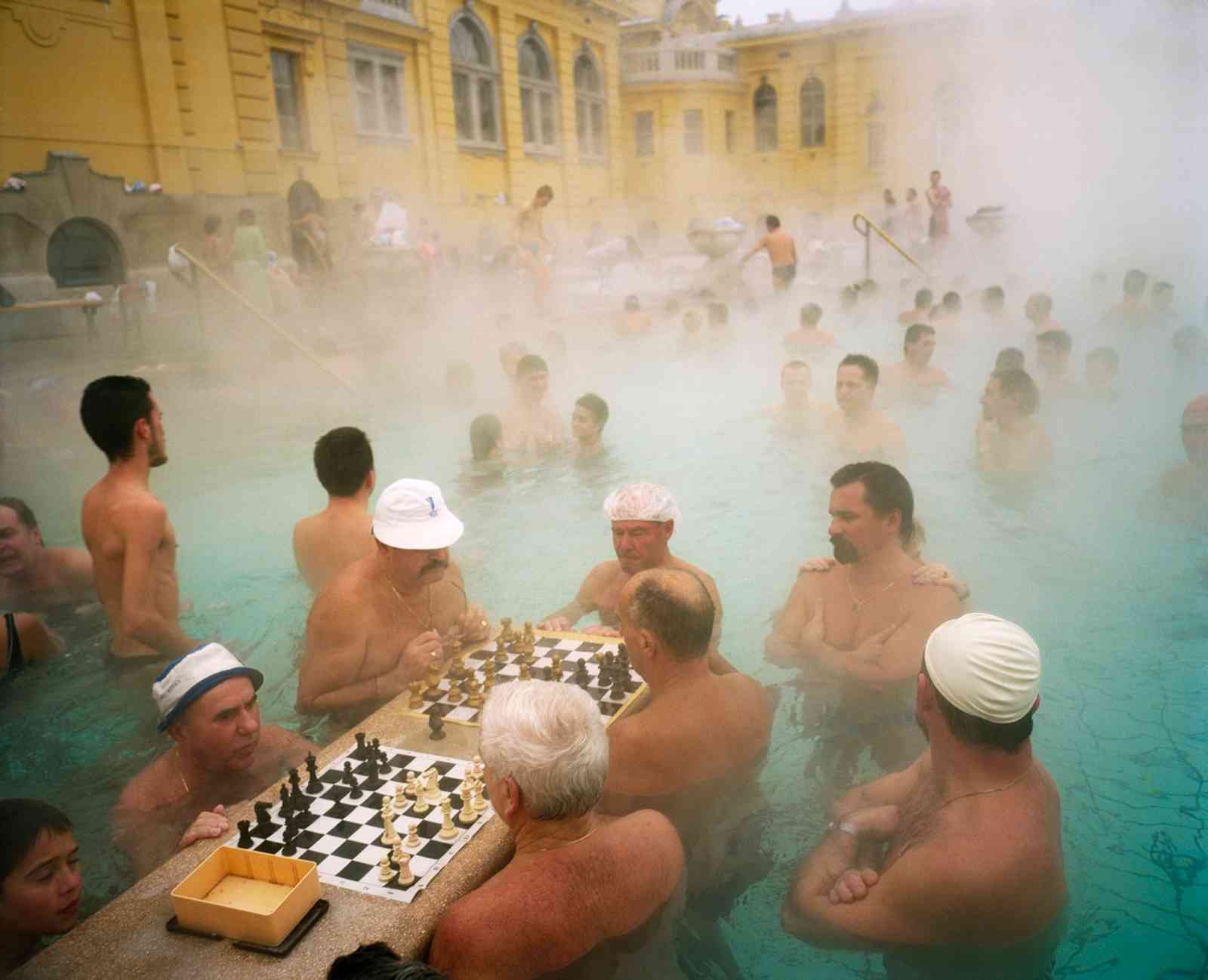 One of your photos (above) was taken in thermal baths in Budapest. How do you work in situations like that to get unguarded photos, without altering the scene around you?

The photographs where people are looking at me generally get eliminated. I work very hard and very long hours, so if you’re out there long enough, you’re going to earn some luck. That’s what some people don’t really appreciate: how much effort you have to invest in getting a decent set of photographs. On one level, photographing is very easy, and on another, it’s very hard.

Is that kind of investment of time essential to being a photographer?

Yes, as well as real belief in your ability to do that and to find a connection to the subject matter that is very personal, very subjective.

Humour’s a big part of your work. Are you always looking out for quirky moments to happen? 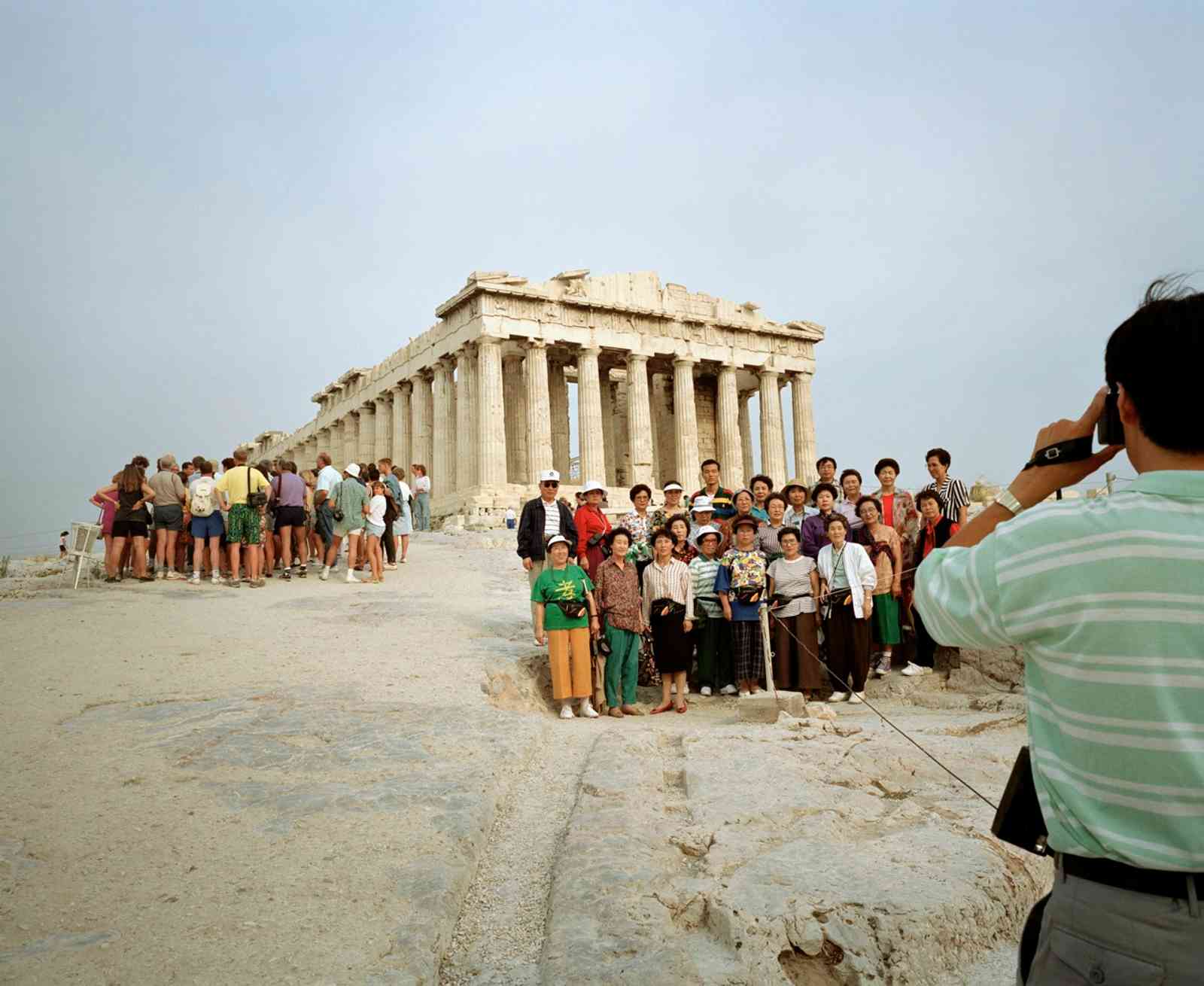 I understand you like to collect interesting objects and souvenirs.

I do collect. I collect things like photo books. The art of photography is partly collecting. You’re putting together images to make them into statements, whether it be a show or book. Its part-collecting, if you like.

What’s the most interesting souvenir you’ve brought back from a trip?

I’ve collected things like Margaret Thatcher memorabilia and Saddam Hussein watches. It is rather a quirky, eccentric group of objects I’ve accumulated.

I didn’t know there was such a thing as a Saddam Hussein watch. Do you wear that when you go out?

You’ve said before that “Photography is a bit of a lie.” Are you aiming to get at the truth with your photos?

I create fictions out of reality. The important thing is my relationship to the world. That’s my subject matter, rather than the world itself. I’m very keen to try and demonstrate my own viewpoint.

You’ve been criticised, including by those who say your work is exploitative. How do you feel about that criticism?

I welcome it, really. I realised pretty early on, when I did the The Last Resort, the first project I did in colour, that controversy was quite a good thing. I don’t look for it, but neither do I grimace when it comes along. I accept it fully and realise that it has a part to play.

For more on the exhibition, visit www.eventbrite.co.uk