From fresh seafood market stalls and cherry blossom canal strolls to mesmerising temples and traditional inns, make the most of your trip to Kyoto with our ultimate guide...

It was such a cliché it could have been a scene from a film. Across the narrow and fast-flowing river was a brightly lit restaurant. In the window sat a group of wealthy looking Japanese men with two immaculately made-up maiko – apprentice geisha – joining them in an age-old tradition.

Meanwhile, a geiko (as geisha are called in Kyoto) scurried purposefully past me, a white parasol protecting her from the light rain shower. Ahead, the little wooden Tatsumi Bridge, recognisable from the film Memoirs of a Geisha, was thronged with a group of British tourists, listening to their guide.

The geiko, avoiding eye contact, somehow made her way silently through them and carried on past the secretive teahouse in which, so it’s rumoured, the Pearl Harbour attack was planned.

In truth, Kyoto can be a bit of an anticlimax when you first arrive at the station, fresh off the shinkansen bullet train. The wide streets could be almost anywhere. The branches of Krispy Kreme Doughnuts, Starbucks and Gap are packed with hip young professionals. There is little sign of the 2,000 or so temples and shrines that are a legacy of the city’s glorious past, including over 1,000 years as Japan’s capital.

But then you find there is a surprise around every corner, from fortune-telling machines (I got told to avoid travel) to a tiny local shrine covered in offerings and a small woodblock museum with idiosyncratic hours (“Open when I wake up and close when I must go to sleep”).

As you wander off the main thoroughfares, you find the other, older Japan of folklore. This may be the country that has led the world in developing new technology, but there are plenty of traditional family-owned shops that still don’t take credit cards.

The street-corner vending machines may spew out cold beers and cans of hot coffee, but the simplest restaurants will painstakingly prepare aesthetically pleasing dishes with the freshest of ingredients. At the shrines and temples, suited businessmen make offerings, praying for success and prosperity.

Walking around, it can sometimes feel like an impenetrable world, with secrets behind every door. But give Kyoto time and, like the mysterious geiko, she will gradually reveal herself and reward you accordingly with her charms. 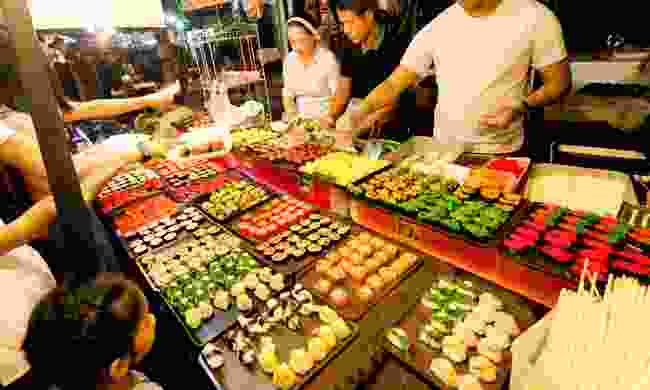 1: Learn to make sushi and tempura in the kitchen of a local home with WAK, the Women’s Association of Kyoto, who also offer calligraphy, tea-ceremony, sake-tasting and kimono-wearing classes.

2: Take a guided walk through Gion after dark to gain an insight into the world of geiko (Kyoto’s name for geisha) and maiko (apprentice geisha).

3: Walk through the 5,000-plus orange-red torii (shrine gates) of Fushimi Inari Taisha. The shrine is dedicated to Inari, god of rice and business. Companies and individuals buy torii of various sizes in a quest for riches and good fortune.

4: Wander around Nishiki Market to purvey a bewildering array of foodstuffs, to marvel at the world’s most expensive mushrooms (matsutake) and sample more affordable takeaway treats, such as tofu doughnuts.

5: Make tea, something the Japanese have turned into a Zen-influenced spiritual ritual. Partake in a traditional tea ceremony at the Fukujuen tea store, before buying some leaves to take home. 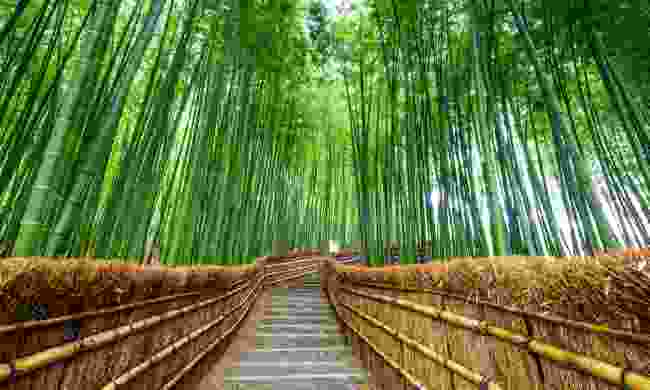 1: The attractive riverside resort town of Arashiyama is deservedly popular. Photograph the iconic wooden bridge, take a boat, train or rickshaw ride, visit Tenryu-ji temple, a World Heritage site, and stroll through a bamboo forest that looks very much like it came from Crouching Tiger, Hidden Dragon. Make the steep walk up to the Monkey Park to come face to face with Japanese macaques. They’re in the wild, you’re in the cage.

2: Out in the northern hills, Kurama is famous for its Fire Festival (October) but is otherwise a sleepy little town, with a huge temple complex and an onsen (open-air hot-spring bath). You can hike to and from neighbouring Kibune village, known for its restaurants, in around 90 minutes.

3: Step back in time in Ohara, 10km north of Kyoto. The rural village is surrounded by paddy fields and forested hills, and is known for its historic Buddhist temples, notably the 1,200-year-old Sanzen-in and Jikko-in (founded in 1013AD). Try the local speciality: cucumbers pickled in ice water, served on a stick. There are a couple of ryokans (traditional inns) where you can have lunch and use the onsen.

4: A former capital of Japan, Nara (37km south of Kyoto) has numerous temples, including the Todai-ji, home to the largest wooden structure in the world, which houses a 500-tonne Buddha. Get mobbed by cheeky deer (you can buy biscuits to feed them), once believed to be messengers of the gods.

5: Japanese green tea is said to have originated in Uji, 14km south of Kyoto. Enjoy a civilised cuppa in what may be the oldest teahouse in world, the Tsuen, and pick-up a sample of the local wares from one of the many stalls lining the route to the lovely Byodo-in temple and superb museum. 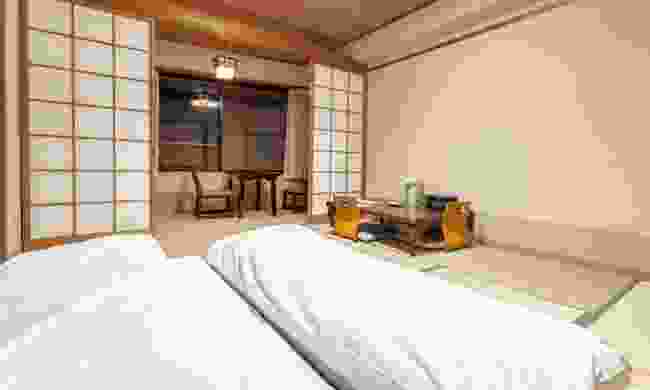 1: Stay in a ryokan for at least one night. In these traditional-style inns, you sleep on futons, and you're encouraged to wear a yukata (light cotton kimono) and eat kaiseki cuisine. The most famous are Tawaraya and Hiiragiya, age-old institutions facing each other in central Kyoto. The Gion Hatanaka Ryokan, near the Yasaka Shrine, is more modern. Shiraume in Gion is highly rated.

2: In a quiet location close to the Imperial Palace, Kyoto’s first boutique pad, The Screen, is luxurious and intimate, with just 13 rooms. Hotel Mume in a quiet corner of Gion, is another stylish and highly rated place in similar vein.

3: Tour Club is a friendly hostel close to Kyoto Station. It’s Japanese-run but English-speaking. Private en-suite rooms are available as well as dorms.

4: For something different, stay in a Buddhist temple: at Shunkoin Temple, which has just five affordable rooms. Here, you can learn Zen meditation from the English-speaking vice-abbot.

5: The Mitsui Garden Kyoto Sanjo is a reliable mid-priced option. What it lacks in character, it makes up for in convenient location in the centre. It has its own onsen (Japanese bath), and breakfast is a mix of Japanese and western dishes. 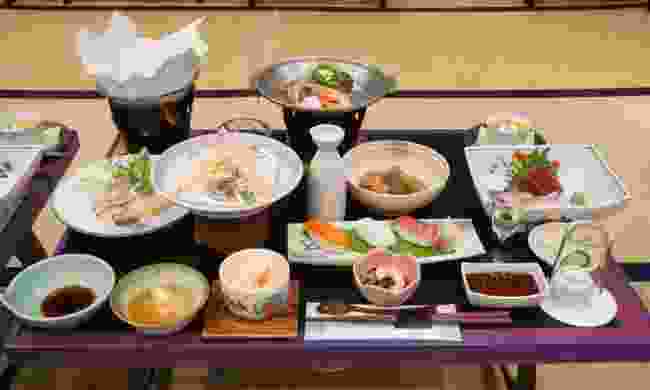 1: Forget the cellophane-wrapped over-chilled stuff from your local supermarket. Instead, eat sushi as it’s meant to be. Head to Iyomata in Nishiki Market (daytime only).

2: Kyoto is known for kaiseki ryori, Japan’s refined and subtle multi-course cuisine. Whether Michelin-starred or not, prices can be sky high. For a modern and affordable take on kaiseki, try Grotto on Imadegawa-dori.

3: Tofu simmered in dashi soup (yudofu) might not sound exciting, but it’s transformed in Kyoto. Yudofu restaurants are usually found at or near temples. Try Yudofuya at Ryoan-ji temple, having contemplated the world’s finest Zen rock garden first.

4: Teppanyaki beef, seafood or vegetables cooked on a griddle in front of the customer is more popular with visitors than locals. Try Itoh Dining in the heart of Gion, which has windows overlooking the Shirakawa River.

5: Sukiyaki or shabu shabu are thinly cut strips of tender beef and vegetables, boiled in different types of broth, served with dipping sauce. Mishima-tei on Sakurano-cho is one of the most famous places to indulge. 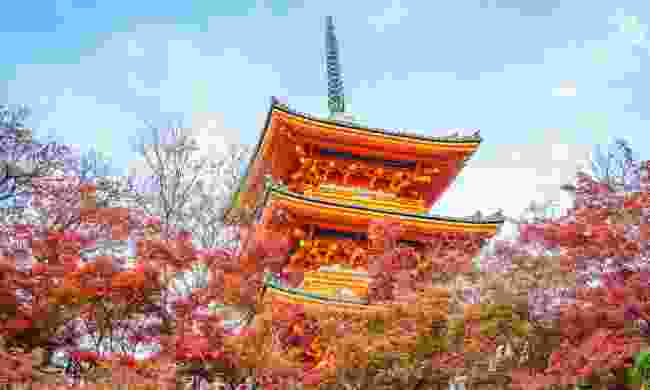 1: Built in 798AD, Kiyomizu-dera is known for bestowing good fortune. It has a path that guarantees success in love, if you can navigate it with your eyes shut. Keep your peepers open though to admire the massive hall and Noh stage, and gaze from the large terrace, which offers lovely views over Kyoto.

2: Beautifully set, Kinkaku-ji – the Golden Pavilion – is a three-storey pavilion covered in gold leaf. Iconic and a must-see, it's also but horribly popular. Get there as soon as it opens in the morning (9am).

3: Ginkaku-ji, the Silver Temple, does not live up to its name, but the modest wooden building is surrounded by beautiful gardens and has its own quiet charm.

4: The huge, brooding Rinzai Zen temple of Nanzen-ji houses a number of sub-temples and gardens. One monumental gate here is famed for being the hiding place of a notorious 16th-century outlaw who, when tracked down, was boiled alive.

5: The 120m-long main hall of Sanjusangen-do is the longest wooden building in Japan. It doesn’t look that special from the outside, but enter and you will be awed by 1,001 statues, each subtly different, of the Buddhist Bodhavista Kannon, goddess of mercy.

Top 5 places for a stroll 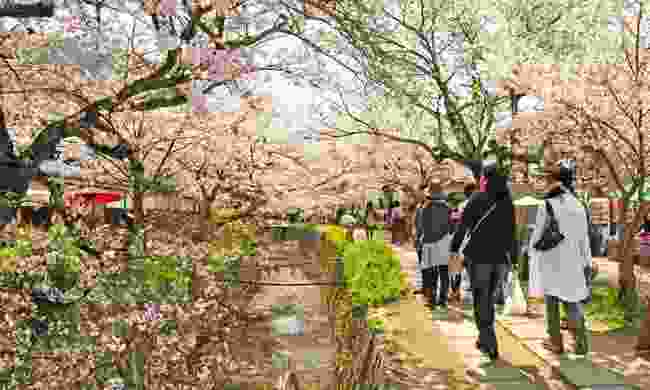 Saunter from Ginkaku-ji to Nanzen-ji along this pretty canal-side path, so-named because influential 20th-century philosopher Nishida Kitaro used to walk this way each day. It's especially beautiful in April, when the cherry blossom is in bloom. The walk takes 30 minutes.

A centuries-old atmospheric alley that runs parallel to the Kamo River and is lined with restaurants and teahouses. Visit after dark when it’s beautifully lit with lanterns. You may see a geisha or maiko on their way to an engagement.

To get a flavour of old Kyoto, admire the views from Kiyomizu before heading down through the charming streets of eastern Gion to Yasaka, a seventh-century shrine famed for its New Year celebrations and for hosting one of Kyoto’s top annual festivals, the Gion Matsuri (July).

If visiting in cherry blossom season, this is a must-do route north through the streets of Higashiyama, as both the start and end points are known for their glorious cherry trees. The shrine is worth a visit at any time of year, though, to admire its huge vermillion gate and lovely gardens, designed specifically for strolling.

Kyoto has some wonderful gardens, designed to replicate the sensory qualities of the natural world and to be enjoyed by walking their pathways. This garden, belonging to an imperial villa, has a lake and several tea pavilions. You will need permission to enter from the Imperial Household Agency. 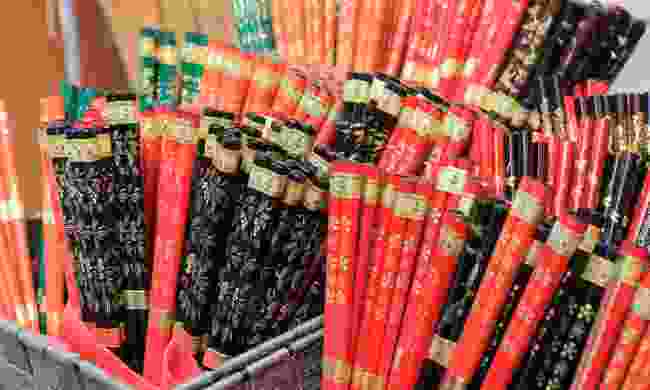 Chopsticks on display in Japan (Dreamstime)

1: A kimono or yukata (the informal cotton version)

Visit the Nishijin Textile Center, an alliance of weavers, to learn about kimonos, rent one for the day or buy one to take home. The Kikuya market (on Manjuji-dori) is recommended for quality second-hand kimonos.

Knife-maker Aritsugu was founded in 1560, when it provided swords to the imperial household. Visit the shop in Nishiki Market, where you can have your name engraved onto your knife and learn how to sharpen it.

Traditional Japanese paper, handmade from a range of trees and shrubs, has many uses, from folding screens to origami and stationery. Buy souvenirs from stationery store Kyukyo-do (on Teramachi), which dates back to 1663.

This art form goes back centuries. See prints being made, or make your own, at the Kyoto Handicraft Center. You can buy yourself an antique original from lovely Daishodo (Teramachi Shopping Arcade).

Japanese chopsticks are shorter than Chinese ones and you’ll be amazed at the variety of styles and prices. Visit the Ohashi-no-Ohshita shop and workshop in Gion, near Kiyomizu, for a splendid range and to see them being made. 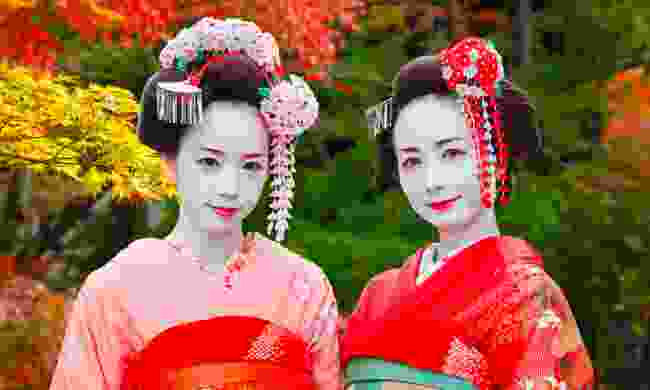 There are still a thousand or so geisha in Japan, with Kyoto a stronghold for these accomplished ‘performing artists’. Much of the entertaining still takes place in ochaya, traditional tea-houses, where you will not be allowed entry. But you are likely to see them making their way between appointments in Gion and in Pontocho Alley.

Kyoto geisha start their training at 15 with the shikomi and minarai stages (look and learn, the lowest rung on the ladder). Later, they become maiko (apprentices) and at 21 they 'graduate' to geiko. Maikos are easily identified as they have their own hair, rather than a wig, and the nape of the neck is left without the famous white makeup.

Many geiko go on to make good marriages. After all, they get to meet Japan’s most eligible bachelors.

The author travelled with Audley Travel