"The foreigners want to stay in a traditional inn, but the Japanese don’t!” said Sayaka at the Fujioto Ryokan. “They ring up and ask about our facilities. When they find that they don’t get their own bathroom, they leave it.”

Peeking in at lunchtime, Fujioto’s dining room was packed full of Japanese day-trippers, but once the coaches and cars leave, it is foreigners who stay the night in the traditional ryokans of the village of Tsumago, in Japan’s Kiso Valley.

This particular ryokan is over a hundred years old, but other inns had sat along this street for centuries; for Tsumago was one of the post towns along the Nakasendō Highway, a narrow 17th-century trail linking Kyoto and Edo (modern-day Tokyo), a route in turn built along that of a much older trail. Running for 500km across mountain ranges, it was an alternative to the only other route, along the coast, and would have witnessed a steady stream of horses and pedestrians. 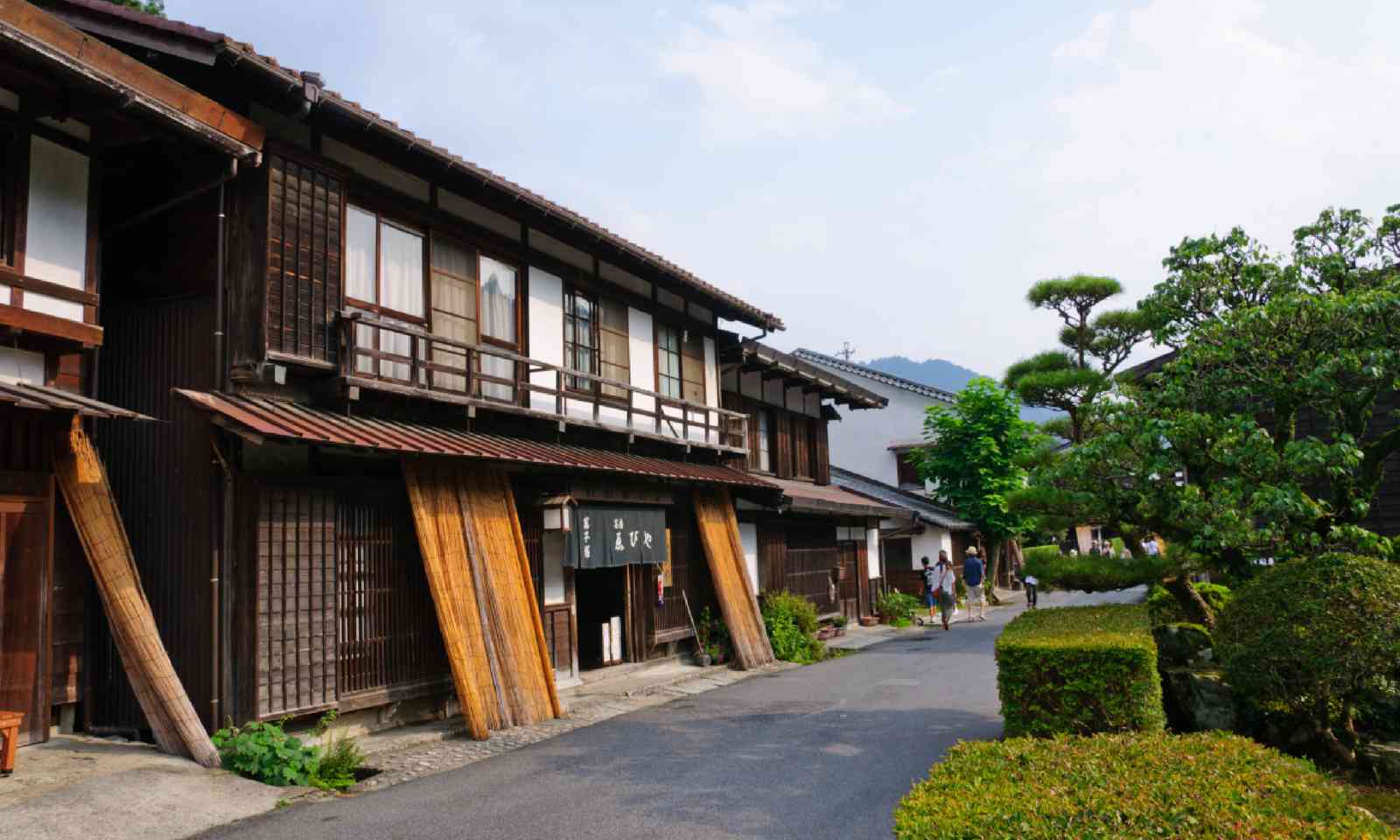 Parts of the route have been preserved and restored, and it is possible to walk between the historic towns. The most popular section is between Magome and Tsumago, a hike of two to three hours. I’d set out from Magome, a pretty town with a steep, cobbled street lined with souvenir shops and eating houses.

Equipped with a bell to warn any bears that I was coming, I walked through tiny hamlets and past small farms with neatly cultivated patches of cabbage, onions and pumpkins. The fields gave way to bamboo stands and forest of pine, cypress and cedar. There was one steep section, the Magome-Toge pass, and it was all downhill from there on.

A beaming man beckoned me in to what was apparently the Tateba Tea House and gestured to me to sit at a table where a guestbook lay open. A cup of tea, some boiled sweets and a plate of pickles were put in front of me as I perused the messages from grateful walkers of all nationalities. “Thank you for kidnapping me with hospitality,” read a typical post. I asked my host his name. “Suzuki! And I drive a Suzuki too.”

The trail dropped down into beautiful Tsumago village. Some years ago, the residents made a decision to preserve its unique character. The buildings are still wooden machiya-style along the high street and all external signs of the modern world are banned from view; so no TV aerials, no telephone cables, no electric light. There are no cars allowed along the main street between 10 and 4pm, the visiting coaches and cars parking in a nearby car-park.

The village is now a tourist honeypot as a result, but a well done and very likeable one. There are several restaurants and cafes. I tried a local speciality – oyaki– a sort of bread dumpling with a choice of vegetable or nut filling. A few doors on, I had a delicious hot chocolate, a welcome change from the ubiquitous green tea. However, walking on again, a smiling kimonoed lady gestured me into a small shop, where free samples of bamboo tea were being given out to tempt us to buy the stuff. 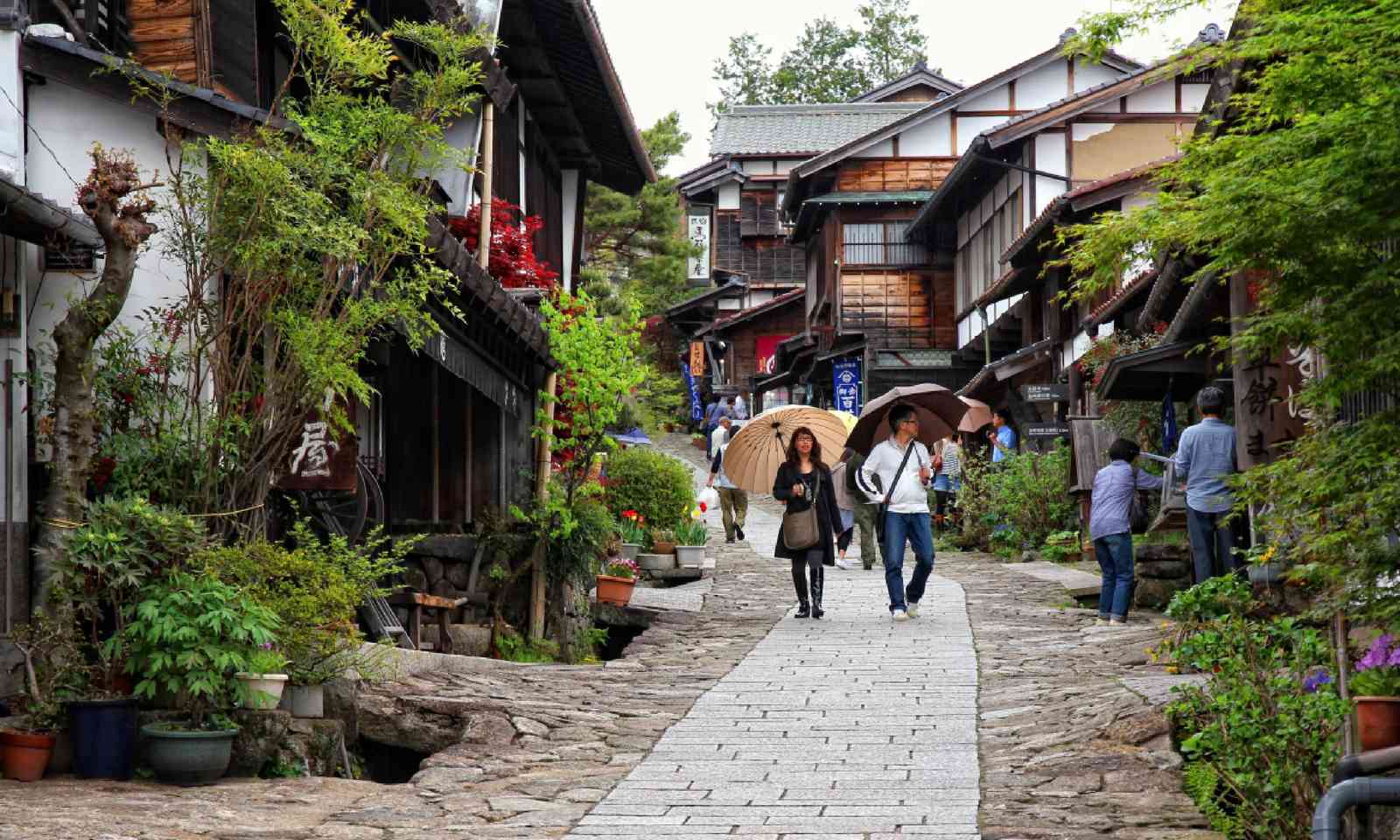 There is not much to the village. At the cavernous Tourist Information Office, you can pick up a simple map of the walk and can put down a returnable deposit on a bear bell. No-one could confirm when a bear was last seen in the vicinity but it felt good to carry one anyway, and the constant tinkle of the bells made for a gentle backing track.

There are three museums; two of them renovated old inns from the days that this was a post town. In the other museum you can learn more about the history of the town and area, including how the owner-farmers were obliged to provide either 25 horses or 25 men for public service. There may have been benefits to being on the highway from a trading point of view, but it was also quite a burden. In spring, the busiest farming season, one daimyō (feudal lord) after another would pass through, demanding free hospitality and supplies.

At the Fujioto, I was welcomed by Sayaka Fujihara, daughter of the owner. Fluent in English, she showed me to my simple room, tatami mats on the floor, a yukata – traditional cotton robe – hanging in the small wardrobe. I relaxed with a cup of tea while I waited for the communal bath to become free.

Made from local cedar, the bath is big enough for two or even three people. The first step was to wash and shower so that I was completely clean. I then removed the five cedar planks that were covering the bath and used the end of one to mix the water, as Sayaka had suggested. The water was lovely and hot and very soothing on my limbs.

Dinner was served promptly at six. The time had been emphasised so much, that most of us were there by 5.45, all of us (bar one sulky teenager), dressed rather self-consciously in our yukatas. Seating was on the floor at low tables and I shifted around to get comfortable, aware that every time I moved my robe tried to fall open, exposing my legs and more.


One for the recipe book

Fujioto is known for its food. Course after course appeared, starting with trout that had been freshly caught in the Nakatsugawa River, just yards from the inn. Sayaka demonstrated how to fillet the fish the Japanese way. This involved breaking the tail, pressing along both sides of the fish with chopsticks, then along the top of it. Separate the flesh from around the head. Hold the body of the fish with chopsticks and pull hard on the tail (as if pulling a Christmas cracker). Voila, the spine and bones all pull out in one piece! And no, I haven’t made it work for me at home.

Some of the dishes were made with familiar components, others less so. Bee larva anyone? It does, of course, claim to make you beautiful; a natural botox, and so how could I resist? Other dishes in the multi-course feast included tempura vegetables; steamed pieces of pumpkin, sweet potato and chestnut; raw trout; prawns; shitake mushrooms; and a miso sauce made to a secret recipe passed down the family for generations. Meat-eaters were served beef and chicken too. Osuimono soup was made with fish stock and pine mushrooms (an expensive delicacy). Gohei-mochi, a local speciality, was pounded rice (freshly harvested), formed into small balls and covered with a walnut-based sauce, for which every household has its own recipe. Sayaka would only reveal that it included peanuts and sesame, as well as walnuts, and took two weeks to make. The result was a deliciously sticky BBQ-type sauce.

Just when I thought I could eat no more, a huge portion of green tea chiffon cake arrived; it looked daunting but was as light as a feather and so I managed to squeeze it in.

I waddled outside for a postprandial stroll through the village, initially passing several other yukata-clad visitors doing the same. The only light was from traditional paper lanterns hanging outside some of the houses, along with a crescent moon and a canopy of stars; the first clear night after a week of rain. Within a few minutes I was totally on my own.

From the hill above the village came the rhythmic sound of drumming, the primeval sound only adding to the atmosphere. For a precious few minutes I was back in the Edo period, the sense of history so tangible I felt I could reach out and touch it.


The author travelled with Audley Travel. This article originally appeared in the 127 issue of Wanderlust.