Walking from Jordan to Egypt opens Leon McCarron's eyes to the beauty of the Middle East – and the peaceful, generous people that call it home

This journey began as a concept. To walk around the Middle East, seeing things that perhaps before have gone unseen. Looking for normality, positivity, humanity – the things that connect all humans around the world, but that are too easily forgotten when all we hear and see from certain sources is war, terror and fear.

After that, it became a joint effort. Dave and I planned and schemed, focused, laughed, let excitement and nerves build. We set off from Jerusalem and walked 250 kilometres together before fate/chance/destiny/bad luck intervened and Dave’s left foot cracked under the strain of a heavy pack and the hills of the West Bank of the Jordan Valley.

We broke for a month before realising that I’d be continuing alone. Control and decisions had been wrestled from us by unchangeable circumstances, so to rally against this I restarted the walk at the very top of Jordan – a few days north of where Dave and I had travelled. This was a new chapter, and it felt proper to begin it somewhere with gravitas.

I arrive by car at Umm Qais – as far north as I could go – on a cold morning. That's it for motors for a while. I hope. Fat raindrops chase me down the old Roman roads of the ancient city that once sat on the site. Behind the columns of the main street lies a vista of Lake Tiberius, impressive beyond words even in this weather. 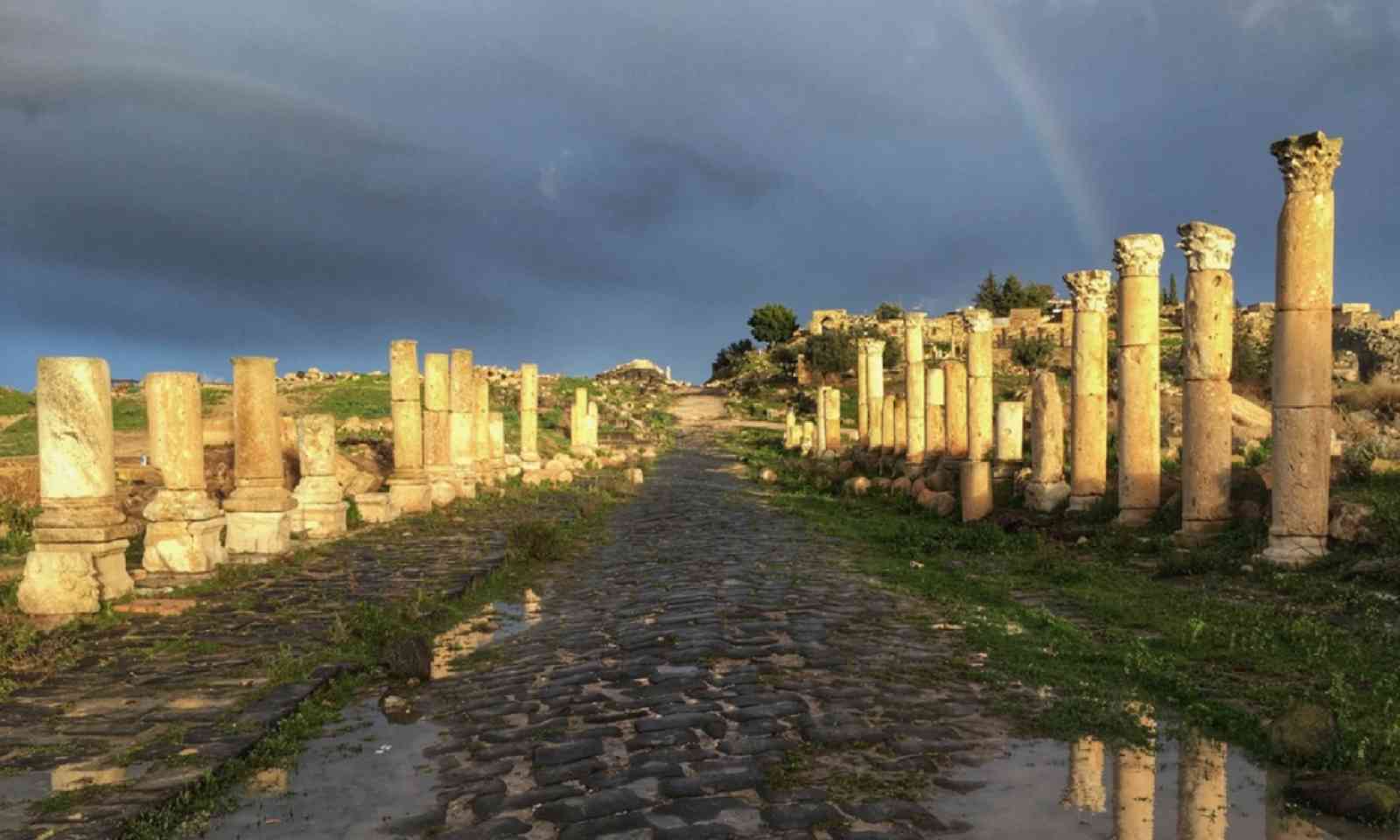 Ahmad, the on-site guide from a museum located in a refurbished Byzantine villa, points out the various places worthy of note. To the left of the lake is Israel. Or, to some, Palestine. To the right the Golan Heights. Again Israel, but to many here it’s important to continue to call it ‘Occupied Syria.’

The Yarmouk gorge is in front of us, and then beyond that, a few more kilometres, Syria proper. 100km further on, Damascus. Between here and there cities split in two between government forces and rebel soldiers. That terminology too is loaded. Nothing here is simply explained.

Ahmad points to a distant bump beyond the lake. “Mount Hermon,” he says. Lebanon. “I was in Lebanon once, in the south, and I could nearly have cried. I could see Jordan. It was only 50 kilometres away, but to get home I had to go back to Beirut, then to Amman.”


This place used to feel so big and connected, they say

It’s not the only time I’ll hear this – throughout my journey south I’ll listen to that sentiment being echoed again and again by Jordanians, Palestinians, Syrians. This place used to feel so big and connected, they say. Jerusalem, Amman, Damascus – some even did them all in one weekend. Now everyone feels increasingly boxed in, especially Jordanians with bad news looming over just about ever border line they have.

Wide-eyed Palestinians join me to look out over a lost land from the Roman ruins. There is sadness here; that undeniable. But there’s so much more too. The pain and suffering has been reported, by others who can do much more justice to it than I can. I’m in search of something else. I leave town and head south, along a narrow, sloping valley. The rain continues and I speed downhill through lush, green mountains that look like Ireland. Maybe they don’t, but it doesn’t matter. I’m on my own, so I say they do, and it becomes true to me. 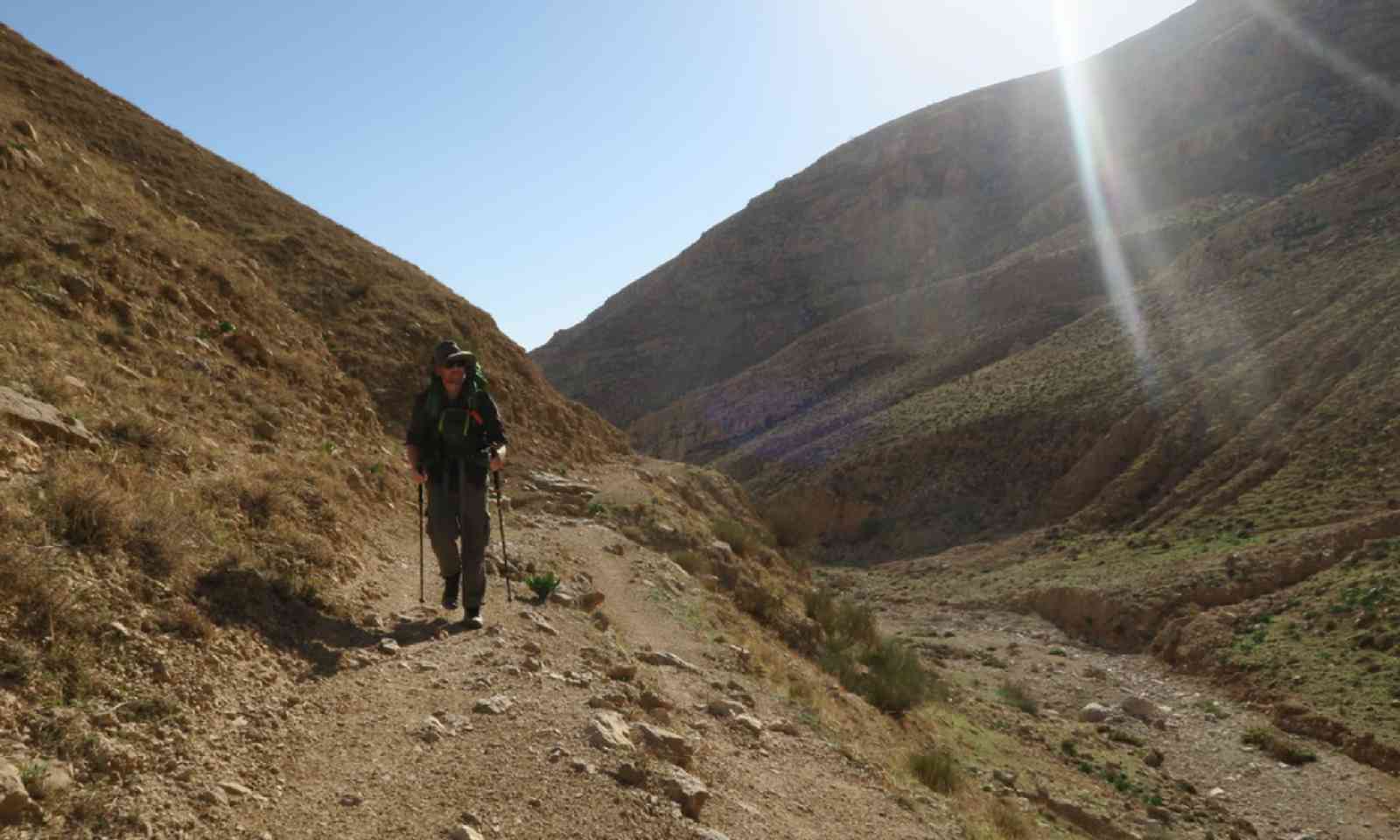 Quickly I find myself boxed in by flash floods: the wadi is raging, and the country road washed away. I think about jumping across. Or I think about thinking about it. I’m almost certain that I’d drown, so I sit down and watch the torrent for a while instead. I have no option but to head back uphill and try my luck on the main highway.

Cars stop and beep and drivers shout out the windows; my afternoon is a compilation of Doppler Effect Greatest Hits. I see a family whose house is flooded, and speak to a man who is trying to help them rebuild their roof. “This family is very poor,” he says. “In the last rainstorm a lot of their house was washed away. I thought they would need help, so I tracked them down and offered to pay for a new roof. It's working in some places, but now we need more money or the rest.” Why did he help, I ask. “Because they are poor and they needed it,” he replied.


I tie my scarf around my head and walk on...

The next day an orange sun pierces a sky bluer than blue, and I push my raincoat to the bottom of the bag in symbolic defiance. I climb out of the Jordan valley and into the mountains.

The rainwater in my eyes has been replaced by sweat and I can’t find my hat. I’m still rusty. Soon I’ll know again where every belonging I own is. Each will have its place in the pack. To others it’ll be a smelly pile of grubby gear in a sack. To me it’ll become a finely tuned tool kit for life and work. I tie my scarf around my head like a Bedouin wannabe and walk on. 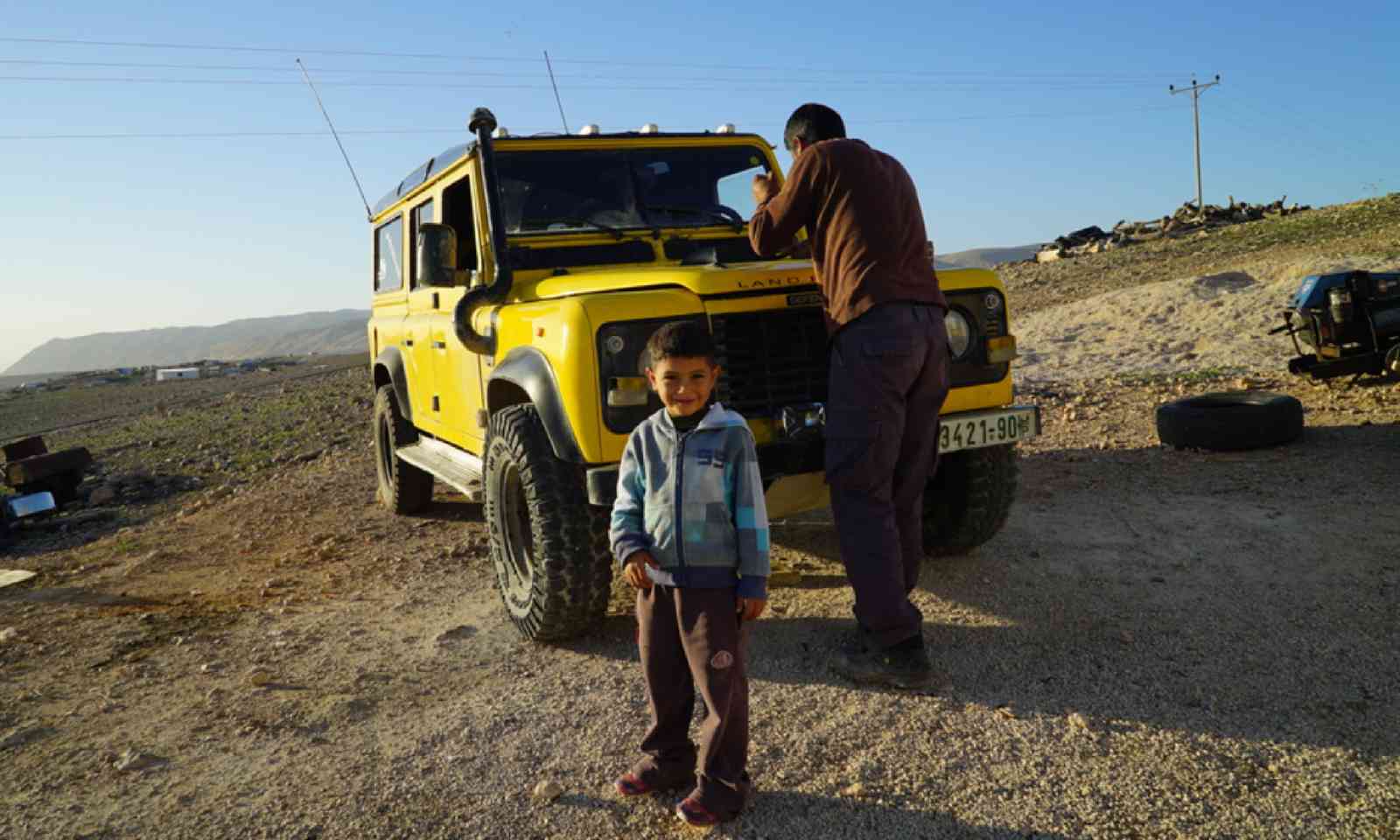 Shepherds stop to say Hi and offer me tea. I go through the spiel – who I am, where I’m from, why I’m walking. With each recital my Arabic accept gets a little better. A tall, dark herder called Feras makes me tea and points at places in the hills that he likes. They all look the same to me, but to him each has a story and a memory.

Why does he like this life, I ask. “I don’t like to live among the people all of the time. Here there is space. It’s better for me. I go to town when I need things or want to see people. Then I come back here to the hills.”

I walk for a couple of days with Eisa, a local guide who opened up a lot of trails in the region. He smiles broadly at everyone we meet and points out everything we pass. “These are figs,” he says. “These ones pomegranate.” “This man is building a new house.” “Here’s an old water mill – people used to come from all over and spend days here using it before everything became automated.” Much of it washes over me but some sticks – the willow trees, the springs, the herbs that are good for tea and the others that are good for ailments.

Villagers stop in their tracks when they see us. They ask Eisa what’s going on, and to each he replies the same. “Come with us and see! You have your things? Your sleeping bag and boots? Come on? Ta’al!” They never do, but they leave smiling.

I climb more hills than I can count, and walk along lonely valleys in the shadow of the hills. In a small town a man called Yassar invites me in for felafel. “There’s gold here,” he says. “I haven’t found any yet, but I really would like to. If you see any, you let me know!” I promise to keep my eyes peeled. 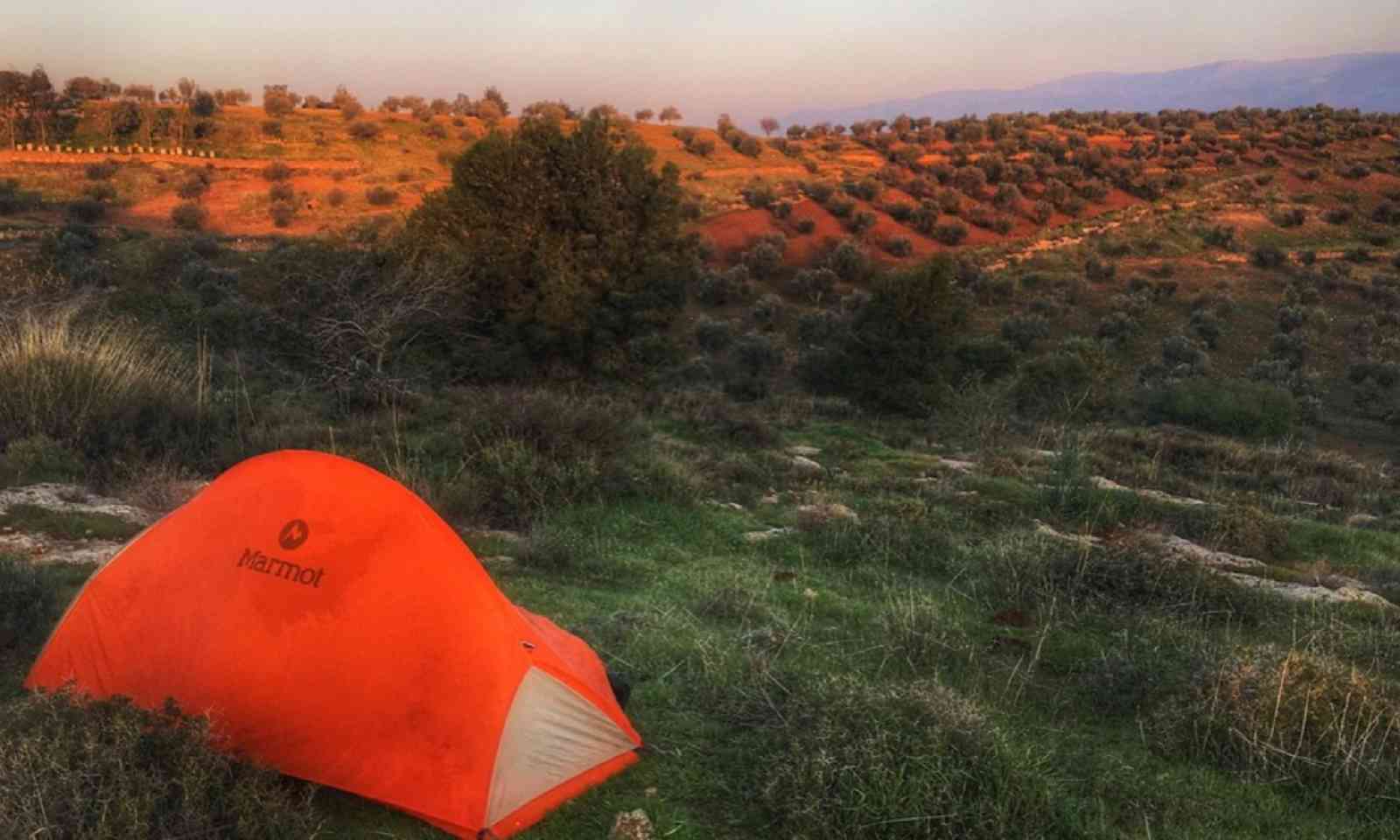 At night I pitch my tent wherever is convenient. It feels now like the Mediterranean - but for the faces and voices I could be in Italy or Spain. To begin with I try to hide my camp in the olive groves, but after a while this seems pointless. I don’t aim for brashness, but I start to choose the nicest spots while making sure they are just far enough away from roads and houses that no-one is likely to find me unless they are looking. Or so I think. One evening I am curled up inside my tent on a small rise above a ruined village when I hear footsteps.

“Afwan,” says a voice. “Excuse me. I am Ali the farmer. I’m here to bring you tea.” I poke my head out and in the darkness stands a small man in an overcoat and keffiyeh with a silver platter. On it rests a blackened kettle and two freshly washed cups. We drink and practice each other’s language, then sit in silence and watch the stars burst through the night sky.

This becomes my life.

I walk and talk; sweat and breathe. I clack my hiking poles together at barking dogs, and I drink deeply when I find a spring. I look to the sky regularly for more rain, and I scan hilltops when I hear the greetings of a shepherd.

I head south at 3 miles an hour. Onwards, along the masar.

In December 2015, Leon McCarron and Dave Cornthwaite set off from Jerusalem, on foot, with the aim of walking 1,000 miles through the Middle East. Their aim was to walk the masar ('path' in Arabic) collecting stories of what they found. But Dave suffered stress fractures in his left foot, so Leon now continues on his own. Follow his journey on the Walking the Masar website, via Facebook and on Twitter.