Experience more for less: How to have a microadventure

Swapping your night in for a wild stand-up paddleboarding microadventure can transform your regular weeknights, discovers Rhodri Andrews...

“Keep your eyes peeled for otters playing on the riverbank,” said my guide, Richard as we paddled along the ink-black water. I couldn't help but notice my wild surroundings: lush overhanging boughs lined the river's fringes while small, disused jetties were enveloped by long grass. No sign of those otters just yet, though.

Sounds like a normal wild escape? Well, you’re half right. Little over half an hour previously, I was sipping coffee in King’s Cross train station, which along with neighbour St Pancras is one of Britain’s busiest. Flurries of commuters moved at a furious pace, anxious to get home for the evening. Others made a beeline for more continental climes aboard the Eurostar. Me? I was bound for the River Great Ouse in Bedfordshire – admittedly not a name that immediately springs off the lips of adventure travel but the sense of the unknown was part of the thrill. It would also be the location of my first microadventure, an overnight outdoor escape which is designed to work around people’s daily working lives. 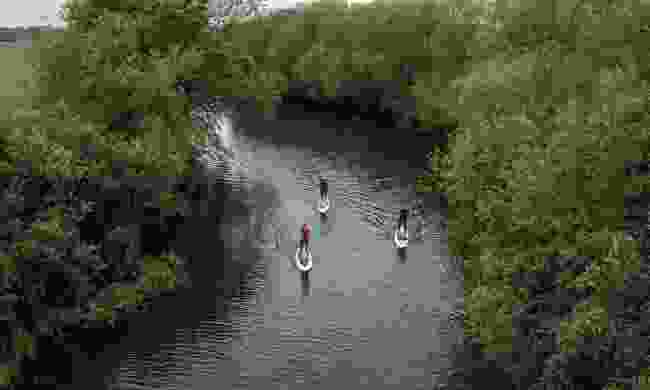 Normally, I’d be like any other ‘average Joe’, my evening routine starring dinner, an unhealthy dose of popcorn TV before retiring to bed ready to repeat for the rest of the week. A dreary combination when it’s put like that. But that’s what microadventures are built for, to substitute that 5pm-to-9am vacuum for something far more exciting.

So here I was, 30 minutes after boarding a packed Thameslink train, standing by the banks of the Great Ouse complete with wetsuit and cagoule. I was listening intently to my guide, Richard Harpham, who co-runs Canoe Trail with his wife, Ashley, a UK tour company that primarily specialises in water-based adventures. I was attempting stand-up paddleboarding (commonly abbreviated to SUP) for the first time, a sport where you're upright on a board similar to those used in surfing and armed with a paddle for propulsion; it's also one of the fastest-growing sports in the UK.

After a quick demo, I grabbed my inflatable board (think more like tyres, rather than a lilo) and splashed it onto the water, before tentatively kneeling down on it and pushing away from the bank. As I practised my paddling, I watched on as the rest of my group gradually climbed to their feet, each with differing levels of nervousness. I made sure I was one of the last, first studying the techniques of others before having a stab myself. No one else had fallen in, so the pressure was on, but it was a surprisingly easy transfer. If you’re wondering, pretending you’re Usain Bolt on the starting blocks is the best way to go from kneeling to standing. 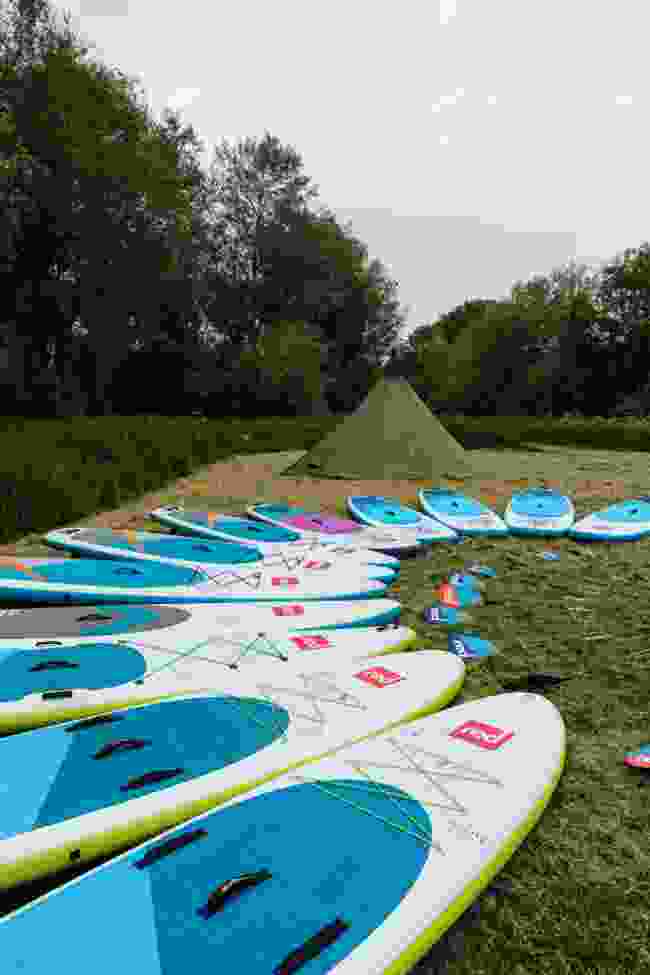 Getting ready for the adventure (GlobalShots) 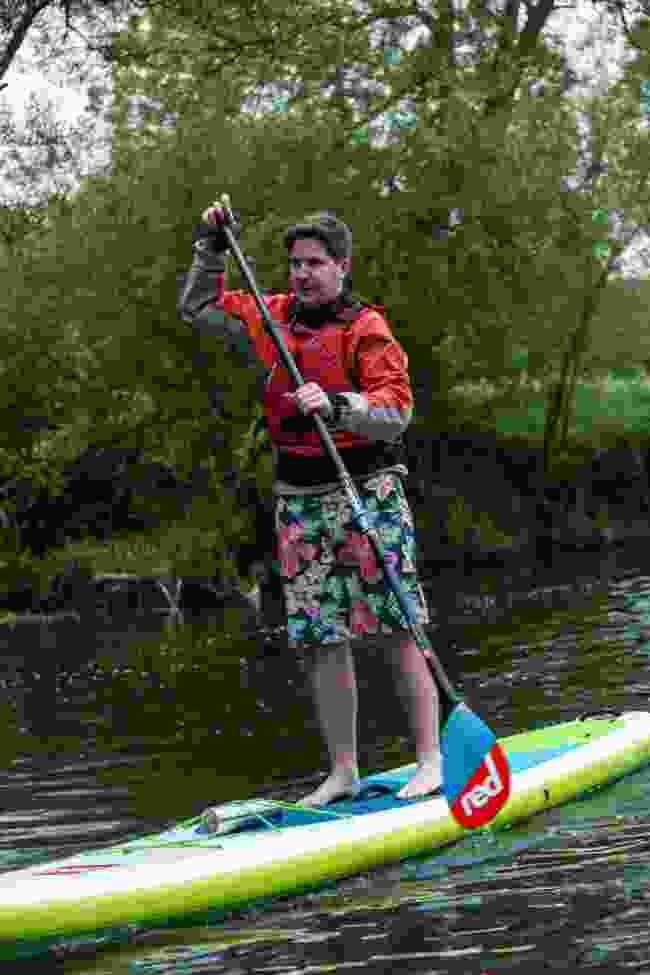 Now I was up, my legs stiffened. The soles of my feet locked themselves to the board, as I tried to avoid falling into the black velvet-like water, which looked more menacing with the sky now overcast and a distinct chill in the air. For the first five minutes, I was happy to float along at a snail's pace.

“Move your feet to the middle of the board,” advised Richard as he effortlessly slid up beside me. “When you're in the centre you'll have much better balance and control.”

I duly obliged, timidly shuffling forwards. I persevered and with every paddle stroke my legs loosened and my body movements became more fluid. I gradually gained speed and felt confident enough to take in my lush surroundings, where plump trees forested the emerald-carpeted verge and reeds crept out of the shallow water like slender green fingers. An inquisitive mute swan glided along with me not long after I started to feel comfortable, acting like a de facto pacemaker to measure my progress. It was a test I felt I passed – the swan became my river pal for a good few minutes – but another milestone wasn't far away. 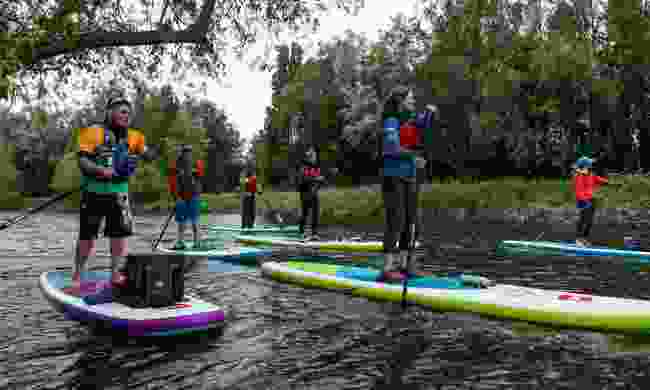 It came in the form of a cruise boat, packed with sightseers tucking into a fish supper and gazing at a group of paddlers teetering on their boards, patiently waiting for them to pass. I rode the wake it generated and even mustered a cheery wave to everyone onboard, as they saluted to us in return. They looked impressed at the sight of some intrepid-looking adventurers, clearly not picking up on the fact we were all desperately trying not to topple over in full view of onlookers.

Another hurdle jumped, my confidence increased further. I started to fall into a rhythm and began to notice more around me as the dependence on improving my skills shrank. A mother goose and her doting goslings coasted past, while I saw glimpses of trout swimming beneath the surface. “Most people don't realise there is this much wildness a short journey out of the city,” explains Richard as we paddle past a row of glamorous river-facing houses. “Things like paddleboarding are easy to pick up and it offers a real burst of adventure. It's certainly a better way to spend a Wednesday night.” 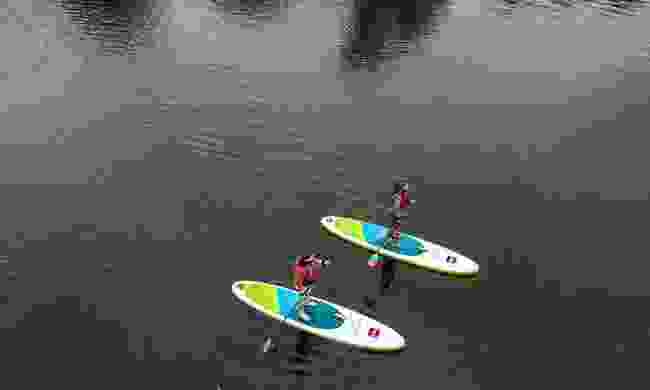 Drone shot of Rhodri and a fellow adventurer (GlobalShots)

I agreed. We manoeuvred down a narrow tributary – by this time I was able to turn steadily and kneel down on command to bypass a low footbridge – and our time paddleboarding was coming to an end. But our microadventure was not. After disembarking our craft, a wild camp awaited us, complete with an open fire, tipis and hammocks. There, we clinked mugs of hot chocolate and recounted our progress along the stretch of the Great Ouse before devouring a feast of roasted sweetcorn, burgers and halloumi, all cooked over the fire.

Bats flitted over our heads as night fell, illuminated by the flickering flames we were now toasting marshmallows over. We chatted in near disbelief about how much we’d packed into one evening and how little effort it had taken to do it. 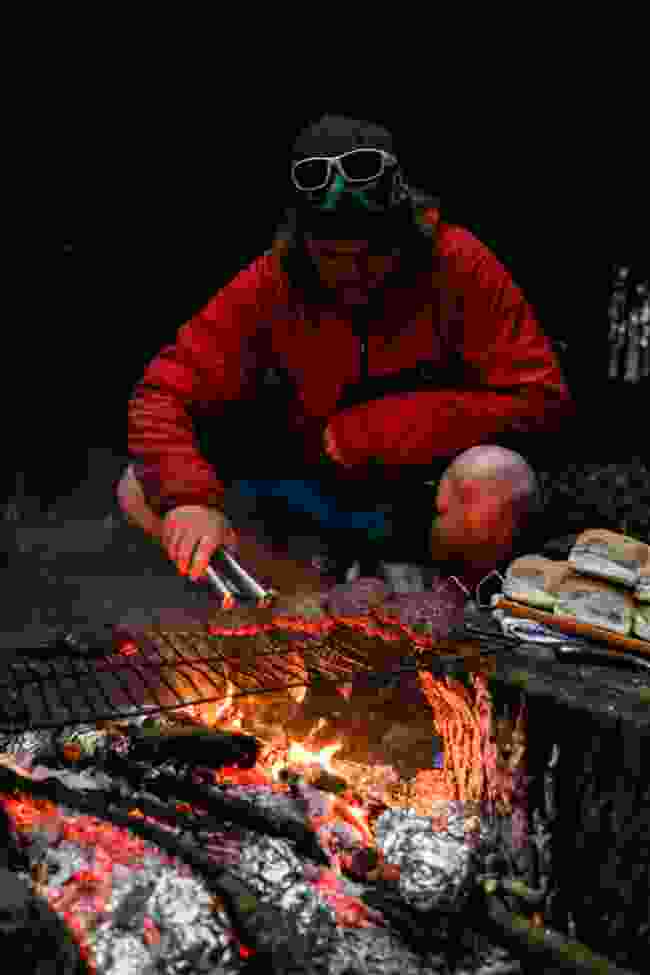 Cooking up a well-earned dinner (GlobalShots) 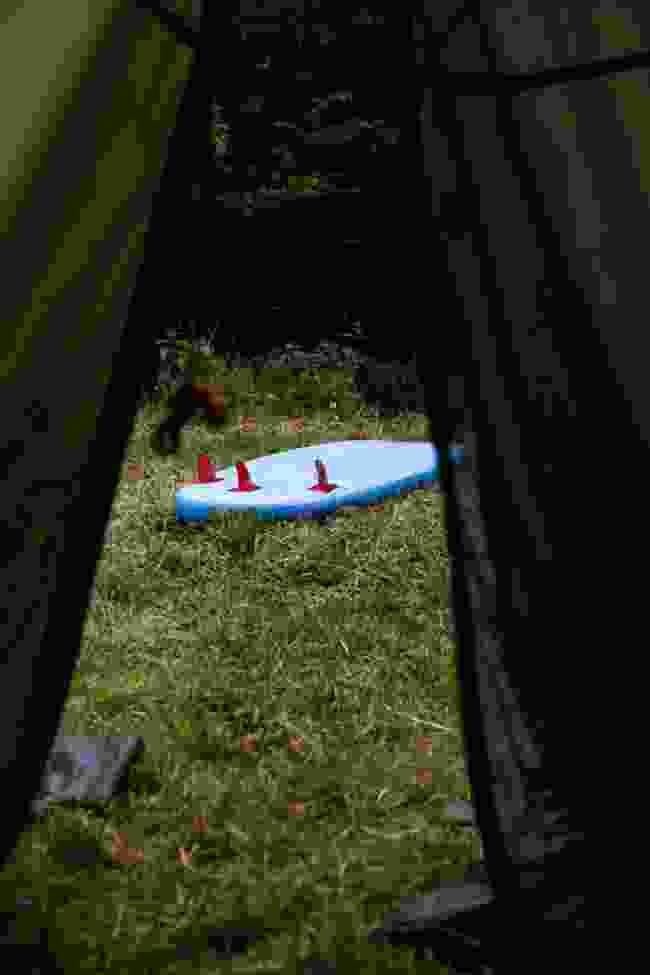 Reflecting on a night of adventure (GlobalShots)

A mixture of our paddling exertions and smoke meant our eyes grew heavy not long after dinner and I collapsed into my tipi. Before drifting off, I reflected on a day where I became competent at a new watersport, paddled four miles along a river, had a delicious flame-cooked dinner and cosy fireside chat. It was a weekend’s worth of adventure packed into a single evening and a bog-standard evening of dinner in front of the telly certainly paled in comparison.

Rather than my phone alarm, I woke up the next morning to the sound of birdsong, peeled back the tent door and the smell of sausages and scrambled eggs wafted up my nostrils. I stared in wonderment once again at the wild setting I’d camped in and scratched my head in bemusement at the thought of how I’d wasted my weekday evenings when all this was possible. I left making a mental list of what other adventures could replace making a dent in the sofa. I’d never think of weeknights in the same way again.