Here’s a geographical conundrum: how did Greenland, which is mostly ice, get named ‘green’ land, while its altogether greener neighbour Iceland ended up as, well, ‘ice’ land?

It’s the wrong way around. You’d imagine that every now and again someone in the Icelandic tourist office calls up Greenland to point out that it really would make sense to swap names. “Guys,” he probably says, “this is nuts. Your big draw is ice, so why don’t we just hand over the whole ‘ice’ thing to you and you give us the ‘Greenland’ name? Then we’ll all be happy – and our visitors, and yours, won’t get so confused.”

It would make more sense: Iceland really is green. Truly. On a good day, of which there are many, Iceland can make Ireland look a bit short-changed in the 40 shades of emerald department. The country is all grass and heather and birch shrubs, rolling hills and sapphire-blue rivers watering verdant valleys. True, there are a few glaciers – indeed, some very large ones – dotted around Iceland but, really, not enough to give the whole country such a chilly name.

Still, moniker apart, Iceland has done a good job of building a thriving tourism industry out of what might at first sight look like unpromising material. Sun ’n’ sand breaks?

Nah – never really a runner up north. Gourmet holidays? Well, yes, but only if you like ram’s testicles, rotted shark, smoked puffin and very, very many recipes for cod. How about music then? Well, I supppose there’s Björk…

What the Icelanders do have, though, is benchmark wilderness. Oh, and some pretty bracing weather, too.

The kind of meteorological pick ’n’ mix that streams down from the Arctic Circle a few miles to the north or wafts up on the Gulf Stream, or whirls out from the very forge of Vulcan himself. Locals say: “If you don’t like the Icelandic weather just wait for ten minutes and it’ll change”. Though the more pessimistic then add “…for the worse”.

But squared up against the charms of more artificial countries, Iceland’s raw authenticity is a telling advantage. As are its horses, arguably the purest in the world. The early Norse settlers of the eighth and ninth centuries brought their best steeds with them, bedded down on the bottoms of open boats sailed across the north Atlantic. Then, 800 years ago, the Icelandic parliament passed a law prohibiting the import of horses. So since then Iceland’s horses have improved and toughened in total isolation, like some extreme Darwinian experiment in evolution.

Our goal was to spend three days in the saddle on the réttir, the autumn gathering-in of the hundreds of horses that spend the summer grazing the island’s hilly interior. The réttir is part cowboy round-up, part folk festival and part endurance challenge. Above all it’s an excuse for far-flung farming families to get together and have a bit of a party.

At Bjargshóll Farm a group of us – English, Scottish, French and Scandinavian – prepared to join the locals. First, though, there were boxes of waterproof oilskin trousers and jackets to pick through. So when we pulled shaggy, stocky horses out of the corral and began tacking up, the day-glo orange suits made us look less like riders and more like trawlermen wrestling with strange sea creatures drawn from the watery depths.

We could have looked even more eccentric, though: 70 years before us the poets WH Auden and Louise MacNeice travelled around Iceland. Auden recommended wearing stout gumboots, riding breeches or plus fours, oilskin trousers and a long oilskin coat falling below the knees. He also claimed to have worn both trousers and pyjamas under his riding breeches, and two shirts, a golf jacket and a coat under his oilskins. MacNeice thought him a bit of a sissy. Both were challenged by the food and the weather. But they spoke highly of the Icelandic horses. 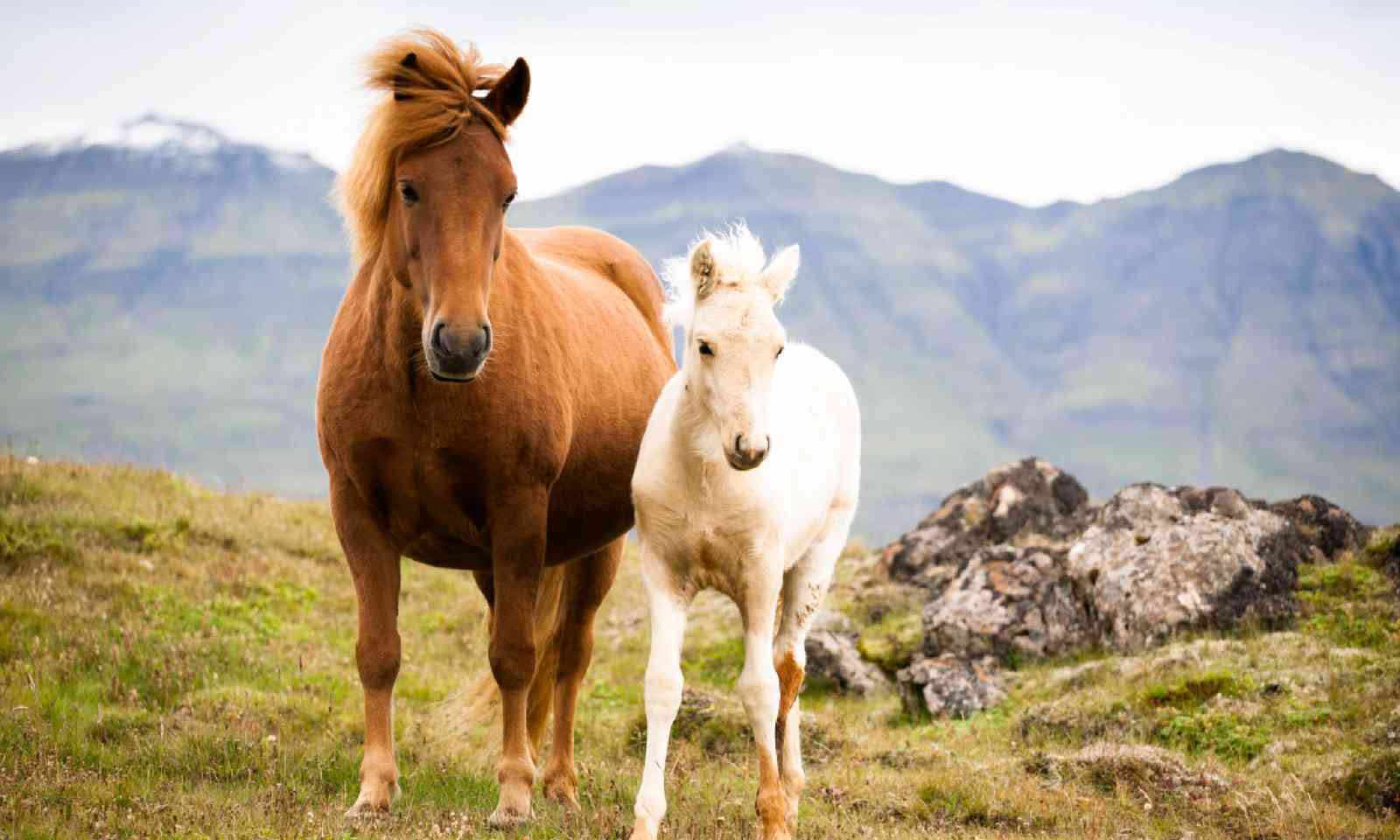 Actually – I’ll whisper this – anywhere else, Iceland’s ‘horses’ would be ponies. Even the biggest of Equus scandinavicus rarely makes 13-and-a-half hands –that’s 13 widths of your own hand, plus two fingers’ thicknesses – off the ground. As a mark of respect, the Icelanders insist that they’re called ‘horses’. Once mounted, though, I still found my Wellingtoned feet were somewhere around my steed’s knees.

But here’s the thing about the Icelandic horse. It may look like an equine Volkswagen Beetle, but it’s one that’s had a V-8 engine stuffed into the boot, and then been given a five-speed automatic gearbox. You see, unlike most breeds, the Icelandic horse has five gaits. They can walk, trot and gallop, as you’d expect, but then they throw in a couple of extras – as I discovered to my surprise as we set off from Bjargshóll for the distant river valley of Víoidalur. The first is where the legs move together on the same side, like a camel running – the skeio. And then there’s the four-time ‘running walk’ or tölt, which carries you so smoothly across even the roughest ground that you can – they say – carry a full glass of champagne at top speed without spilling a drop. Given the price of beer in Iceland, let alone champagne, this is obviously of huge importance in a mode of transport.

A feat of strength and endurance

These creatures may be small, but they can carry a heavy man at a brisk pace. The Icelanders manage to cover huge distances in a day by emulating Genghis Khan’s Mongolian hordes who would drive spare horses alongside to change between at regular intervals. Thus, though I started out on Húni, I had two more horses – Finnur and my favourite, Hugrún – along in reserve, as did everyone else.

So our 20 riders meant 60 horses, which created a problem that only became apparent when, after a few hours trotting along a dirt road, we stopped for a quick snack and to swap mounts. The Icelanders say that there are 40 colours, and a hundred variations on those colours, yet all the horses seemed to be an identical brown. We wandered around, bridles in hand, looking lost, while our Icelandic guides, Eggert, Herdísk and Palli, were left to identify and point out our new horses.

As we travelled through the landscape, the horses were like time machines carrying us back into the land of the Sagas. We skeio-ed across the wide and rugged terrain, dwarfed by the mountains we were due to climb the next day, while grim ravens serenaded us from overhead. Iceland-buff Tolkien’s Lord of the Rings, I realised, isn’t so much a work of awesome imagination but more a factual travel guide to the emptier bits of Iceland. 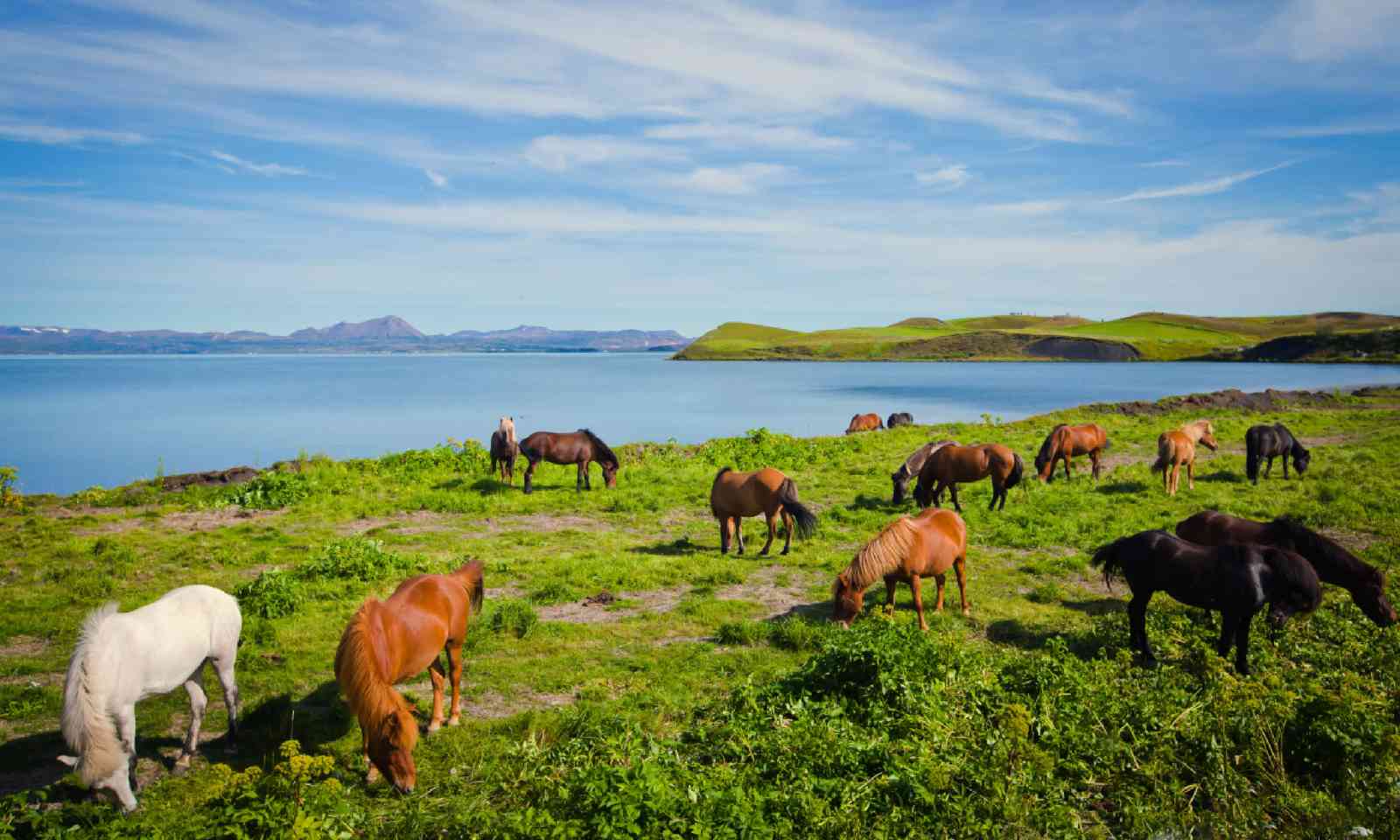 Like hobbits on a mission we spent that night at Daeli Farm, singing, feasting and drinking. The Icelanders enjoy both their singing and drinking – and take both seriously. ‘Spontaneous’ sing-a-longs are, in fact, planned well in advance, with sheets of lyrics ready to hand out and singers who have practised complex four-part harmonies of Iceland’s treasure trove of rather jolly hymns and blood-and-guts folk songs.

The round-up’s theme song seemed to be ‘Á Sprengisandi’, whose lyrics apparently tell of outlaws, sheep rustling and feisty horses.

Next morning we joined groups of local riders threading their way up the tracks into the mountains. After hours of riding we met up with the super herd of 700 horses in the middle of a desolate and stony plateau. It was a raw and epic landscape. Whole weather systems moved across the surrounding heights like scenery being pushed on and off a proscenium stage. Rain and storm clouds and shafts of sunlight elbowed each other out of the way.

A rainbow, independent of either rain or sun hung in the sky like a curtain while the mountain peaks turned black then suddenly blazed into the browns, umbers, scarlets and yellows of autumn.

The herd of 700 loose horses careened up behind us, driven by the farmer-wranglers at a spanking pace. In the moving mass of horseflesh sweeping past us down the hillside it was difficult to make out more than the odd individual detail: a head raised with nostrils flaring; the loud drumming of hooves as the horses squeezed onto a narrow bridge above a deep gorge; a colt’s ears pricked forward, eyes wide; the skittering of many legs as the track turned suddenly below us; and then the sound of the horses heading down into the valley in front of us as we fell in behind them. 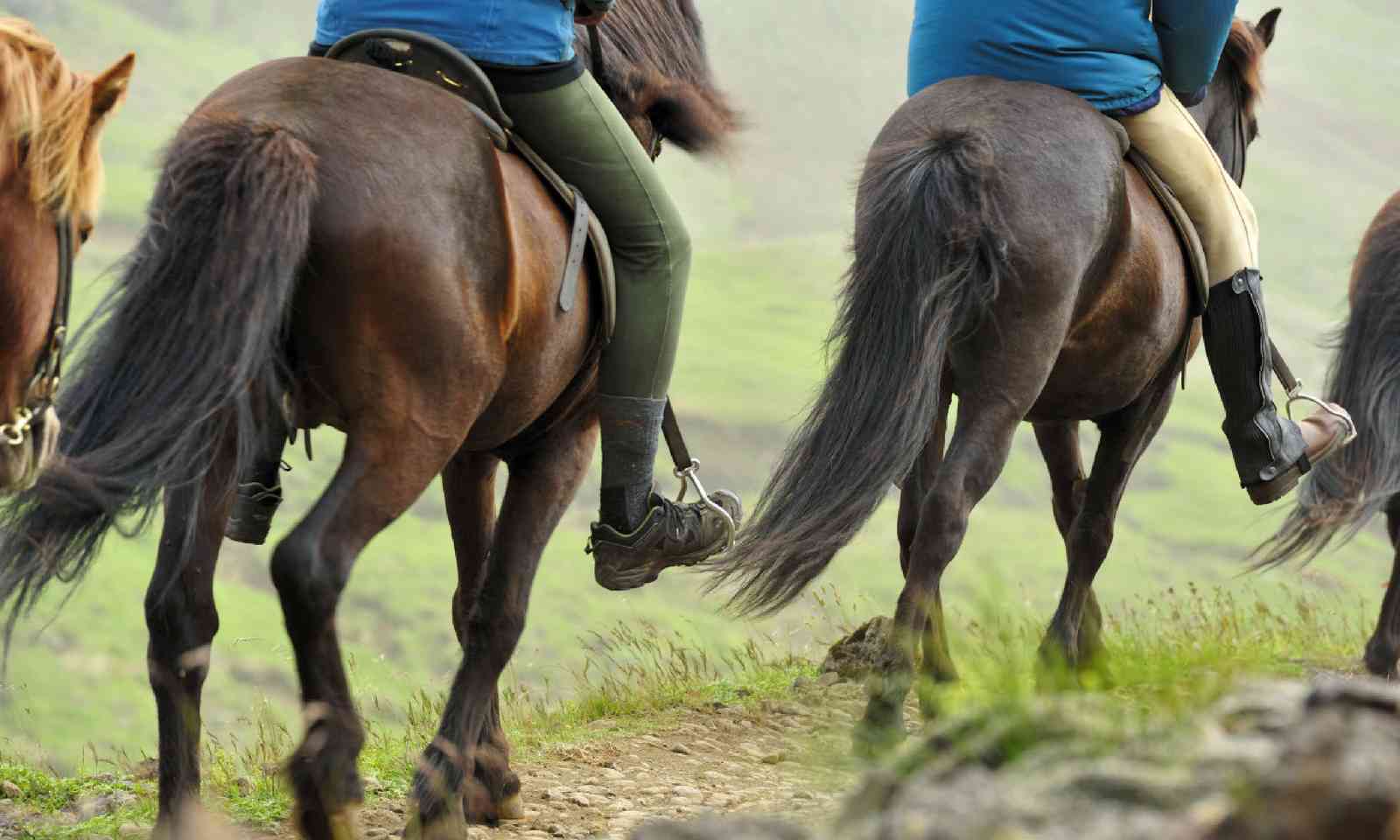 On the third and final day of the réttir the horses were driven into a pen and sorted, ready to be returned to their respective owners. We rode and drove our own horses back to Bjargshóll Farm in a dashing cavalcade that took us splashing across salmon rivers, through miniature, hoof-height orchards of Arctic berries, and along gritty dirt roads. The return of the horses to their farms heralds the onset of winter, so the round-up also signifies a last gathering of people before the long, cold, dark nights.

We squeezed into a crowded village hall late on the night of the sorting where a ‘we-play-everything’ band was thudding and squealing through old rock-and-roll songs and bottles of drink were being passed around. Swinging my dance partner around wildly in the subterranean light, bouncing off other hot bodies, waving at the people I’d ridden with across Iceland’s hills and valleys, I felt I’d joined one huge family. Grandparents and young children, city-slicker cousins from Reykjavík, farmers’ daughters and sulky teenagers – all were packed into one happy, seething mass.

My mind wandered back to the herd of horses we’d driven down from Víoidalstunguheioi and sorted out into their ‘families’. Winter was coming to Iceland. A few more weeks and the country’s name would actually make a little more sense.