Suffragette city: Your guide to London’s most important ‘Votes for Women’ sites

February 6 2018 marks the centenary of (some) women getting the vote in Britain. Author Rachel Kolsky reveals five sites you should visit in London which played a vital role in the suffrage movement

Built in 1878 for political and artistic events, Caxton Hall hosted the Women's Social and Political Union's annual Women’s Parliaments from 1907. In 1916, it hosted the second Women’s Exhibition, opened by writer and suffrage campaigner, Israel Zangwill.

Resembling village fetes, these exhibitions brought together different strands of suffrage campaigns while raising valuable funds. The hall has since been converted to 13 luxury flats.

Nearby, in Christchurch Gardens, you will see a large bronze sculpture in the shape of a scroll  Unveiled in 1970, this memorial was commissioned by the Suffragette Fellowship, established in 1926, to perpetuate the memory of the courage and perseverance of all the men and women who struggled for the vote. Incorporated into the design are the insignia of the WSPU and WFL.

The Houses of Parliament were the scene for many of the key moments in the ‘Votes for Women’ campaign. It was here that suffragettes chained themselves to railings, disrupted debates and dropped banners into the Commons chamber. Emily Davison famously hid overnight in the broom cupboard by the Chapel of St Mary Undercroft so she could declare her address on census night in 1911.

Following women gaining the vote, the Houses of Parliament have witnessed many female firsts – Nancy Astor, the first woman MP to take her seat, Margaret Thatcher, Britain’s (and the western world’s) first female Prime Minister  in 1979 and Betty Boothroyd, the first female Speaker in 1992.

Next to the Victoria Tower, you will find a statue of Emmeline Pankhurst, who founded the Women’s Social and Political Union (WSPU) in 1903. 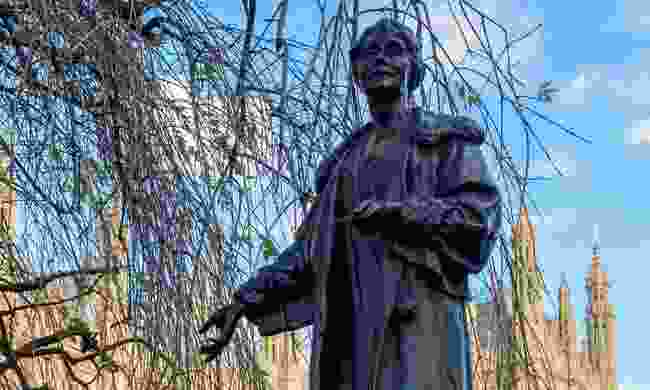 Mary Ward (1851–1920) was a novelist, philanthropist and opponent of women’s suffrage. Born in Tasmania, she arrived in England in 1856, married Humphrey Ward and became a successful writer.

Mary Ward House originally opened in 1898 as the Passmore Edwards Settlement. It  was intended as an infant welfare centre for the impoverished working classes of the King’s Cross area, and included classrooms adapted for disabilities.

In 1909, the settlement hosted a famous public debate between Mary, President of the National Women’s Anti-Suffrage League and Millicent Fawcett, the leader of the largest suffrage organization, the National Union of Women Suffrage Societies. Mary lost by 74 votes to 235. After her death the settlement’s name was changed to Mary Ward House, and in 1982 it relocated to No. 42 Queen Square.

The plaque here commemorates the site of Nos. 3 and 4 Clements Inn and is a reminder that there was more than one  influential Emmeline in the suffrage campaign. It was  home to Emmeline and Frederick Pethick-Lawrence, a thoroughly modern couple with with hyphenated surnames and separate bank accounts, unheard of in the day.

Emmeline joined the WSPU in 1906 and was subsequently imprisoned six times. Together with her husband, she established the journal, Votes For Women, in 1907, supported the WSPU financially and offered their home at No. 4 Clements Inn as an office and HQ, ultimately bankrupting themselves for the cause. In 1912, they refused to support the proposed WSPU arson campaign, and despite their previous loyalty, were expelled from the movement.

Emmeline did not desert the suffrage campaign, aligning herself with the Women’s Freedom League (WFL), comprised of those disillusioned with the WSPU, and for which she was President between 1926 and 1935.

The home of Edith Garrud (1872–1971) is commemorated with a green LB Islington plaque. Edith attended her husband’s ju-jitsu classes and then encouraged other women to learn self-defence at her own establishment in Argyll Street, near Oxford Circus.

Ju-jistu proved a perfect martial art for women of small stature, allowing them tactical victories over those much heavier and larger than themselves. Edith was commissioned to choreograph fights for theatres and early films, and from 1908 trained 30 women, known as ‘The Bodyguard’, to protect WSPU leaders from arrest using ju-jitsu, hand-to-hand combat and improvised weaponry. In 1910 she was immortalized in a Punch cartoon as the ‘Suffragette who knew ju-jitsu’.

In 2013, a public vote chose her as one of three people commemorated by metal sculptures outside Finsbury Park station, together with social worker Florence Keen and rapper Jazzie B. 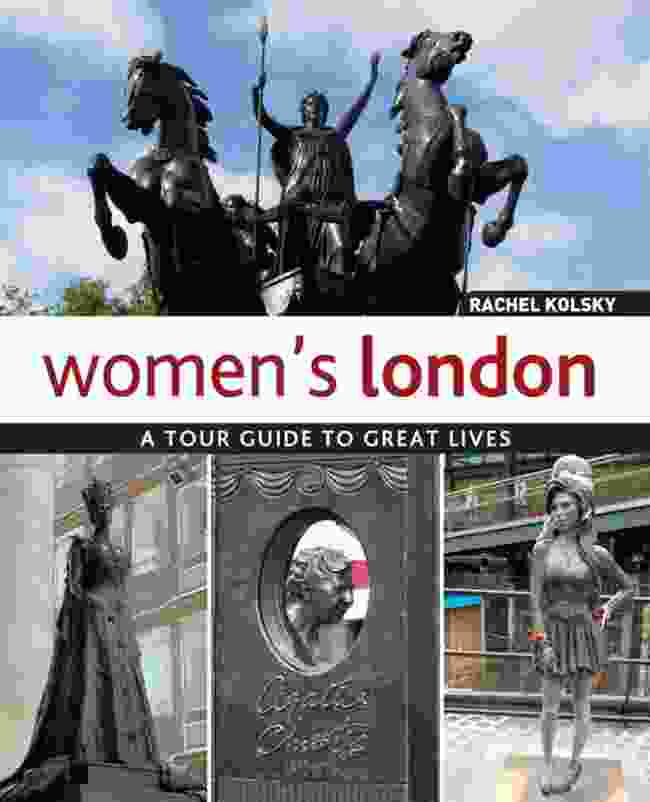 Rachel Kolsky is the author of Women's London, a guide to the woman who have shaped London over the centuries and the legacy they have left behind. You can order your copy on Amazon, or order a signed copy directly from Rachel for only £10 by emailing here at info@golondontours.com.

Rachel is also a prize-winning, London Blue Badge Tourist Guide tour guide and offers a specific tour on Women’s London that focuses on the 'human stories behind the buildings’. Visit www.golondontours.com for more details.