Ed Byrne: "I didn't go into it expecting to have a spiritual experience – I'm aware of my limitations"

Comedian and hillwalker Ed Byrne has been walking Spain's Santiago de Compostela for the BBC show The Pilgrimage. Phoebe Smith catches up with him to talk travel, religion and the perfect walking trail…

So – the Camino de Santiago is pretty long – which part of it did you walk?

We did a Whitman's Sampler – a grab bag of various bits from different parts of the trail. We did the hike over the Pyrenees from Saint-Jean-Pied-de-Port, over the hills and down again, over the course of two days. Then we tried different interesting stretches of it, then completed the last 100km – something you have to do to get your Compostela certificate.

Did you get your Compostela and go to watch the giant botafumeiro (incense vessel) swing at the Mass?

I did get my certificate, yes! But I didn't go to the Mass and I'll tell you why. People were queueing out the door to watch the service. Televisually, they didn't need all of us and I didn't really want to deprive someone who really wanted to be at the service, while I stood there not really into it, as it were.

It wasn't a religious thing for you, so what attracted you to the pilgrimage?

I thought it was a good excuse to go for a walk. I'd heard it was a really good hike and whenever a TV company says: 'Would you like to go for a walk?', I say: 'Yep! You're going to pay me to walk?!'. I was all over it…

“When I spoke to people, on camera, they played down their religious views and said they'd just heard it was a good walk”

What did you think of the scenery around Galicia?

Well, the scenery during the first day, when we went over the Pyrenees, was beautiful. The majority of the scenery on the walk… well it's not a walk I'd choose to do. It's very busy. It follows roads for quite a lot of it. I felt it's everything I go walking to avoid. There's also a constant bombardment of religious iconography. For all the people who say you don't have to be into it or have to see it as a religious experience, it's fairly rammed down your throat every step of the way.

Did you speak to any other hikers?

Yes, lots. What was interesting about most of the people I met when I spoke to them, on camera, they played down their religious views and said they'd just heard it was a good walk. Then, when the camera wasn't rolling they admitted they'd watched the film with Martin Sheen called The Way. It was weird, I didn't know if people felt it was too shallow a reason to give on camera but it seems to have made a massive difference, particularly with the Americans.

And then the Irish people you speak to, there was a lot of them compared to the number of English people there, they again would say it wasn't for religious reasons or Catholic reasons. And yet, it seems an interesting coincidence that people from Catholic countries are the ones doing it, and in such greater numbers than those who aren't. There were a lot of shy Catholics on the walk who don't just want to say out loud that that was their reason.

Where did you stay on the way?

We started off by staying in real pilgrimage hostels (albergues) but we found that wasn't really working for us because of filming constraints – we were arriving quite late in the evening. Sometimes we weren't getting there until half an hour before lockdown. So, there was no time to relax or downtime because they lock the door and turn off the lights and then people are getting up at 5am, turning on their headtorches and making their way out the door.

It would be one thing if we were just walking it and getting there at 6pm and getting up at 5am, but it just wasn't working with the constraints for filming to be staying in the real, communal billets. So, we ended up mainly still staying in basic accommodation, but private.

Has it inspired you to do any other pilgrimage walks?

It has completely put me off to be honest. I went into it with an open mind. I didn't go into it expecting to have a spiritual experience – I'm aware of my limitations in regards to being able to experience that – but I did expect it to be nicer and a more fun, fulfilling and communal experience. It just felt super touristy because everything becomes a tradition. So, every wall you pass, there's f**king ribbons tied to it, or you walk past a bar and there's 400 bottles along the wall, all with people's names written on the bottles. There's this constant desire for people to leave marks and some of that I found, in a way, kind of distasteful.

At one stage there's a cross at the high point of the walk and people are supposed to have brought something the entire way and they unburden themselves of it. But some people are just leaving a beer bottle or a toy, or just literally any old sh*t. But right next to that, somebody has left a granite, carved mini headstone that they've had made specifically for the journey that's to remember their dead brother, daughter or mother, which is obviously a very solemn, meaningful and sad remembrance. Yet it's just scattered next to frivolous litter and you're stepping on it all to get to the cross. It just felt uncomfortable.

So what would your ideal long-distance walk be then?

I like something that involves a lot of finding your own route and a mixture of wild camping and accommodation. One where you can do it on your own or with other people. I love a long distance trek without a doubt. I really enjoyed doing the Haute Route in Switzerland and I think doing one of the GRs in France will be my next long-distance trek.

We've seen you on travel shows with Dara O'Briain. Are you planning to do any more?

There's nothing in the works at the moment. I'm on tour until the summer and I think he might be on tour for even longer than that and I think we'll see. If we did do another one, we both said we’d do the Nordic countries. I'd love to have a hut-to-hut adventure in Norway and some backcountry skiing, or canoe camping through Sweden perhaps. 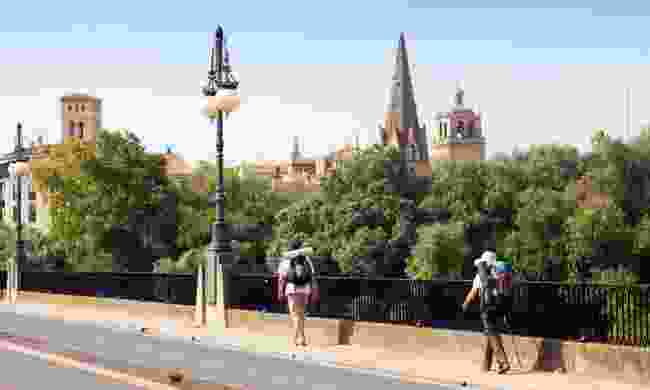 Of all the places you've travelled to together, which one has been your favourite so far?

I think Nicaragua. I think the disparity between what you'd heard about it and the reality of how nice it is was quite marked. The landscape is incredible and in fact, the idea of volcano tourism being an industry is quite attractive I think. You go into places like León in Nicaragua and, though it's touristy, it's not too touristy so you don't feel like a trailblazer being there. You feel like a traveller, as it were.

Would you ever be attracted to the more extremes, like the Polar regions?

I would shy away from something where it's a struggle everyday for survival. I draw the line there.

Fair enough! Is there something that you always travel with and refuse to go anywhere without?

I do have a little handheld Kestrel weather meter that I'm very fond of. It comes on walks with me but I do like to just go: 'Hey, how cold does everyone reckon it is?' and hold it up. It doesn't weigh a tonne; it's a nice nerdy little gadget.

What would be your preference: travel alone or with others?

I have to say, the other thing about the pilgrimage, even though I complained about the volume of people, the people I was actually walking with on the show, we had an absolute ball. I got on very well with all of them and I have since been hillwalking with JJ Chalmers. I've also met for coffee with Reverend Kate Bottley, so we all got on very, very well indeed. I did enjoy hanging out with those folks without a doubt.

No, I don't really. I like to travel with one or two other people, by and large. I don't mind going for a hike on my own, particularly when it comes to overnight camping. One night will do, before I start getting annoyed with my own company. I generally prefer to go with one or two others but I don't like going with too big a group, though, because then you're no longer nimble, if you know what I mean.

Is there anybody you'd like to go travelling with?

I should think of a funny answer, shouldn't I? As a massive Pearl Jam fan I'd like to go on an adventure holiday with Eddie Vedder. At the end of every day, as we sat by the campfire, he would take out his ukulele and compose songs about our escapades.