“There! A big one!” shouted Aku, the captain of our dhow boat, pointing at a patch of sea  that looked no different from the rest of the teal water swirling around us.

We were searching for whale sharks, the world’s largest fish. Some specimens have been known to grow up to 12 metres – longer than the average double-decker bus. I had no clue what to look for, but islander Aku boasted years of spotting leviathan from the sun-bleached deck of his fishing boat.

So, at his insistence, with snorkel and fins hastily donned, I jumped in and began  swimming blindly into the unknown.

My heart was pounding like never before. But within seconds I could make out white spots beaming through the darkening water, then, as they came into focus, I began to join the dots. 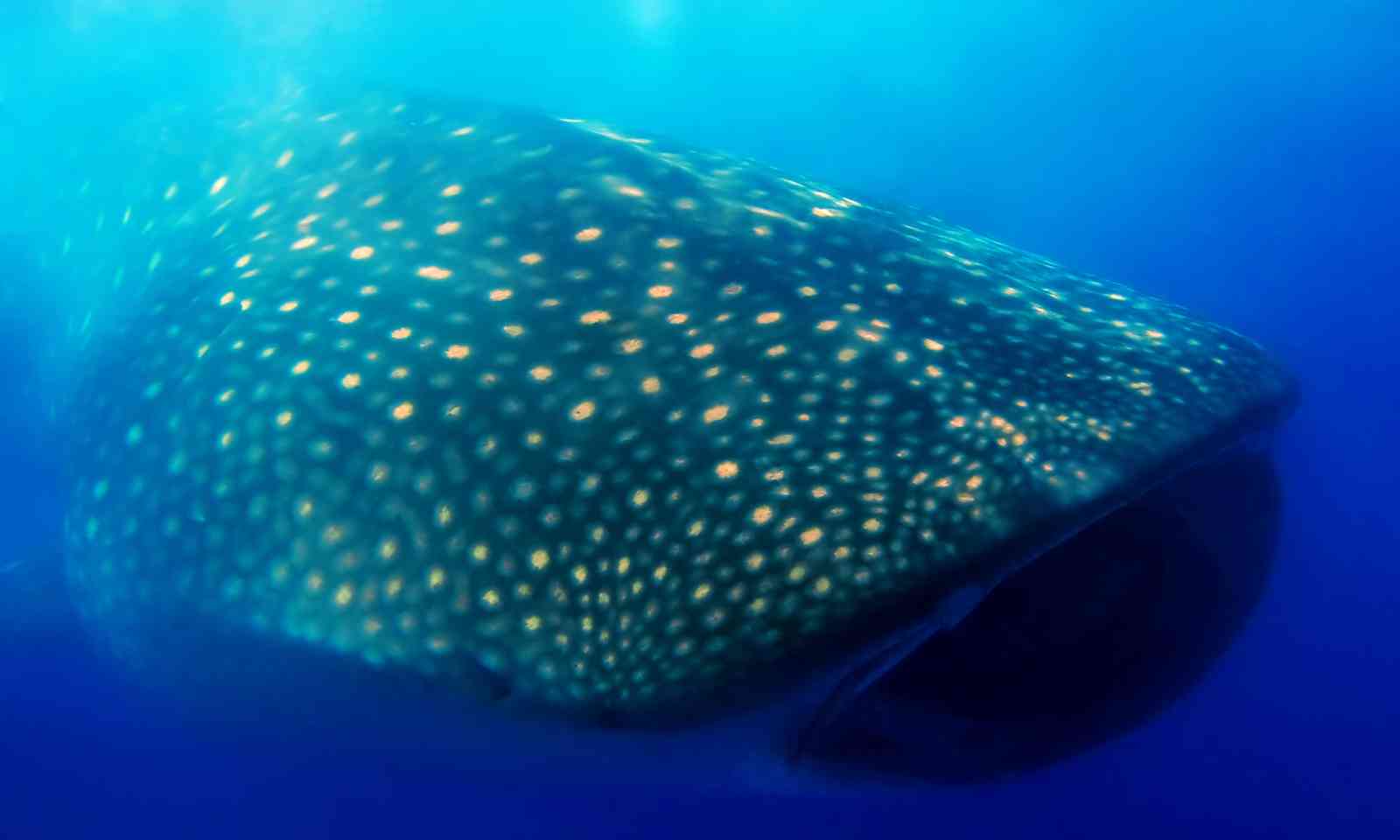 Its size was staggering, a thick grey hide blotting the waters around me. My rational mind told me this was no man-eating shark. These are filter-feeders, sieving the seas for plankton and krill.

They pose no threat to people. Yet swimming just metres from the 20-tonne bulk of a full-grown whale shark, the irrational side of me took over. Surely that metre-long square mouth, with its several hundred tiny teeth, could swallow me whole, I thought.

I pulled my face out of the water to share these concerns with my travel companion. She was nowhere to be seen. Instead, she was perched back on the boat, looking slightly traumatised.

“It’s fine. I saw it! That’s enough!” she persuaded, as I tried to coax her back into the water.

Breathing deeply, I continued swimming alongside the whale shark, its two-metre tail listlessly swaying from side to side, propelling it so slowly that I barely needed flippers to keep up. As the strangeness of seeing it wore off, the experience seemed all the more fantastical. I had never felt so small, so dwarfed by nature.

An hour soon passed, my time ended and I stopped kicking. With barely a sound my gentle giant swam on, quickly swallowed by the sea.

Back in the dhow, the engine struggled on in the absence of any breeze as we headed towards the horizon, the clouds reflected almost perfectly in the mirrored-sea except for the odd faint ripple.

Stopping off at a sandbar, I padded along a slither of pristine flour-white beach ringed by clear turquoise waters, lost in my thoughts of what had just happened, drifting in speechless wonder.

I first heard of Mafia Island on a visit to Tanzania in 2005. Back then, it was a distant dream on our backpacker budget, dangling enticingly in the Indian Ocean, off the East African coast in the Zanzibar Archipelago.

The only sane way of getting there was via one of the adhoc – and expensive – charter flights, unless you wanted to endure a five-hour minibus from capital Dar es Salaam, followed by an even lengthier crossing on rough seas. And when you finally arrived, there were precious few places to stay.

But times change. When I last returned to Zanzibar, the sands were just as powder-white and seas as limpid blue, yet its coast was now studded with hotels, outside which umpteen boys trailed the shores, hawking their wares to crowds of visitors. 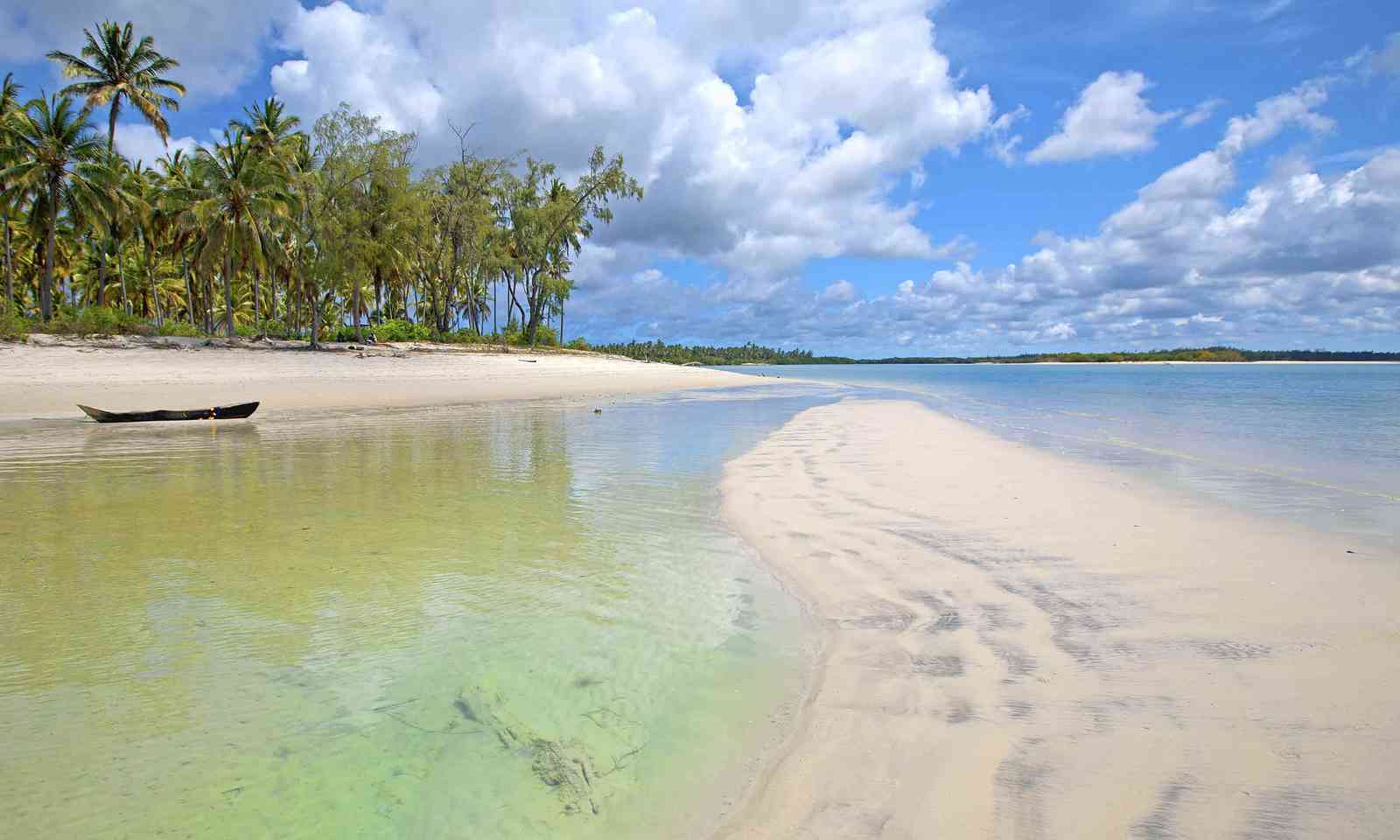 So, once again, I dreamed of Mafia Island, lying quietly some 160km south of Zanzibar, craving its promise of isolation.

Thankfully, things have changed there, too – only for the better. Today, cheaper commercial flights land on the island daily, while at least eight new lodges have been built, as well as hostels for backpackers.

So, I crammed myself into a tiny five-seater plane in Dar es Salaam, next to the worryingly bulging suitcase of someone who hadn’t abided by the airline’s ‘strict’ luggage rules, and flew the 30 minutes it takes to reach paradise.

From the air, Mafia – which is four times smaller than Zanzibar – forms a green crescent, framed by an ivory beach that melts into the still aquamarine Indian Ocean.

Despite its sinister name – and a number of lodges owned by Italians – there are no mobsters, just farmers and fishermen eking out a living.

In Swahili, it’s known as Mahali Pa Afya, meaning ‘a healthy place’; others say its unusual title comes from the Arabic word morfiyeh, meaning ‘archipelago’ – Mafia lends its name to an archipelago of five islands. But what’s in a name?

First impressions revealed the main island, where I would be staying, to be a laid-back affair – there’s no standing on ceremony in Eden. As our plane wobbled down the tarmac runway, a simple white building with ‘Mafia Island’ painted in capital letters across its red tiled roof announced our arrival. The islands’ attraction has always lain in its geography. 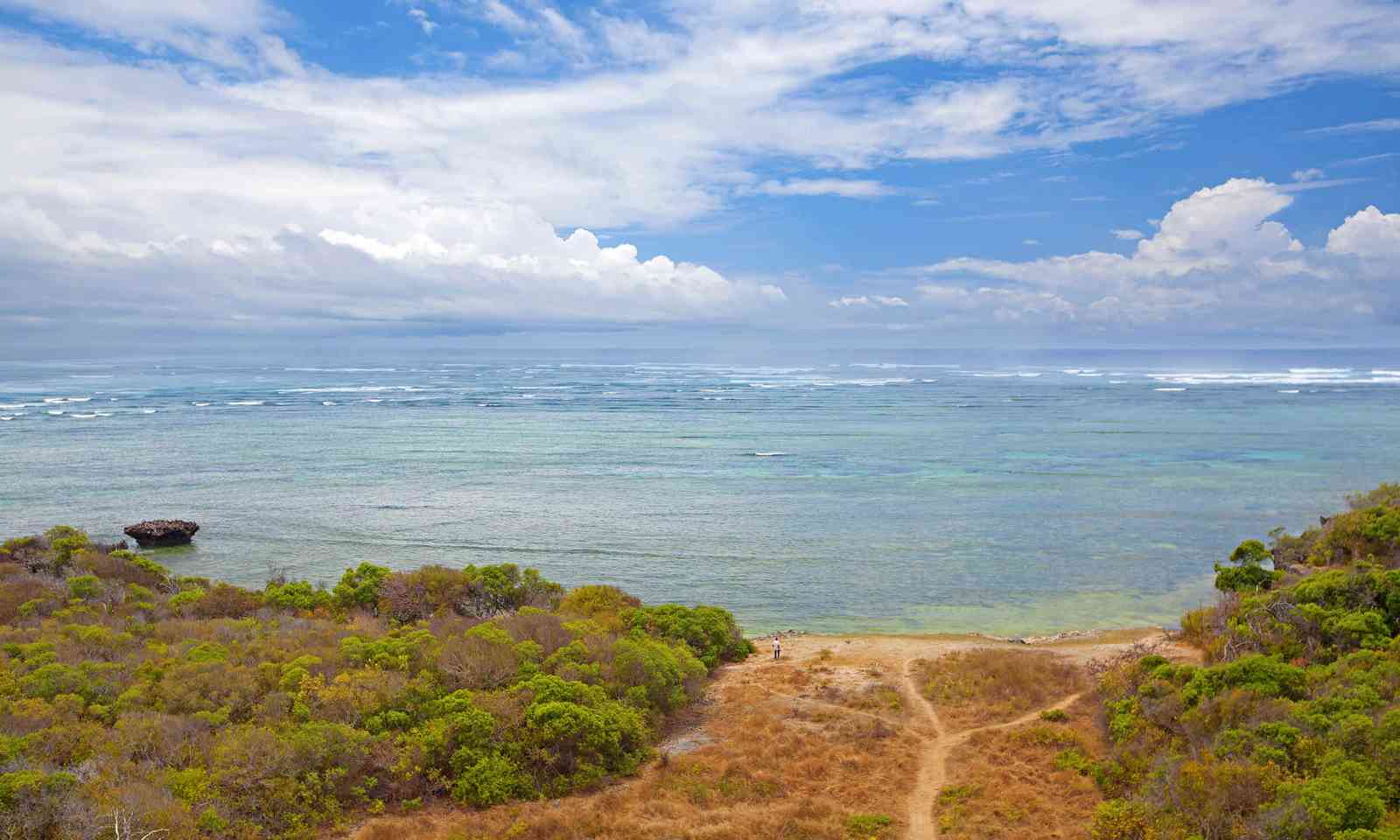 History certainly bares out that opinion. Once a part of the Sultanate of Kilwa, Mafia became a Portuguese port in 1515, before the Omanis took over, using it as a stop-off on the trade route between Africa and the Gulf.

In 1890, Kaiser Wilhelm’s Germany seized control, having been said to have paid the Sultan of Oman 4 million deutschemarks for its strategic privileges, before it was captured by the British in 1915, only to return to African control several years later.

Yet even with a rich heritage and bountiful reef – home to some 460 fish species – Mafia has rarely troubled the radars of travellers, while neighbouring Zanzibar is now one of the world’s top ‘paradise’ destinations.

Then, in 1995, environmental groups successfully lobbied the Tanzanian government to create Mafia Island Marine Park, a 822 sq km protected area covering the east and south of the island and the waters around it, finally putting Mafia on the map, at least as far as divers were concerned. The rest of us have been slower on the uptake.

From the airport, a 4x4 taxi drove us along the one main road in Kilindoni, the island’s capital. This quickly turned into a spinejangling sandy track.

On we went through fields of coconut, mango and papaya trees, past grazing cows and huts built from mud and bamboo. Women in matching headscarves and skirts worked fields of cassava, going about their day as if life had not changed in decades, perhaps centuries.

Our eco-resort, Ras Mbisi, lay on the west coast. Thatched roofs disappeared amid the palms in whispers of island promise. We had a five-mile stretch of pearly shore to ourselves, save for the fishermen taking their dhows to sea at dawn and dusk. I recalled reading one review of Mafia that described it as ’not pretty but raw’. ‘Beautiful’ was the word. 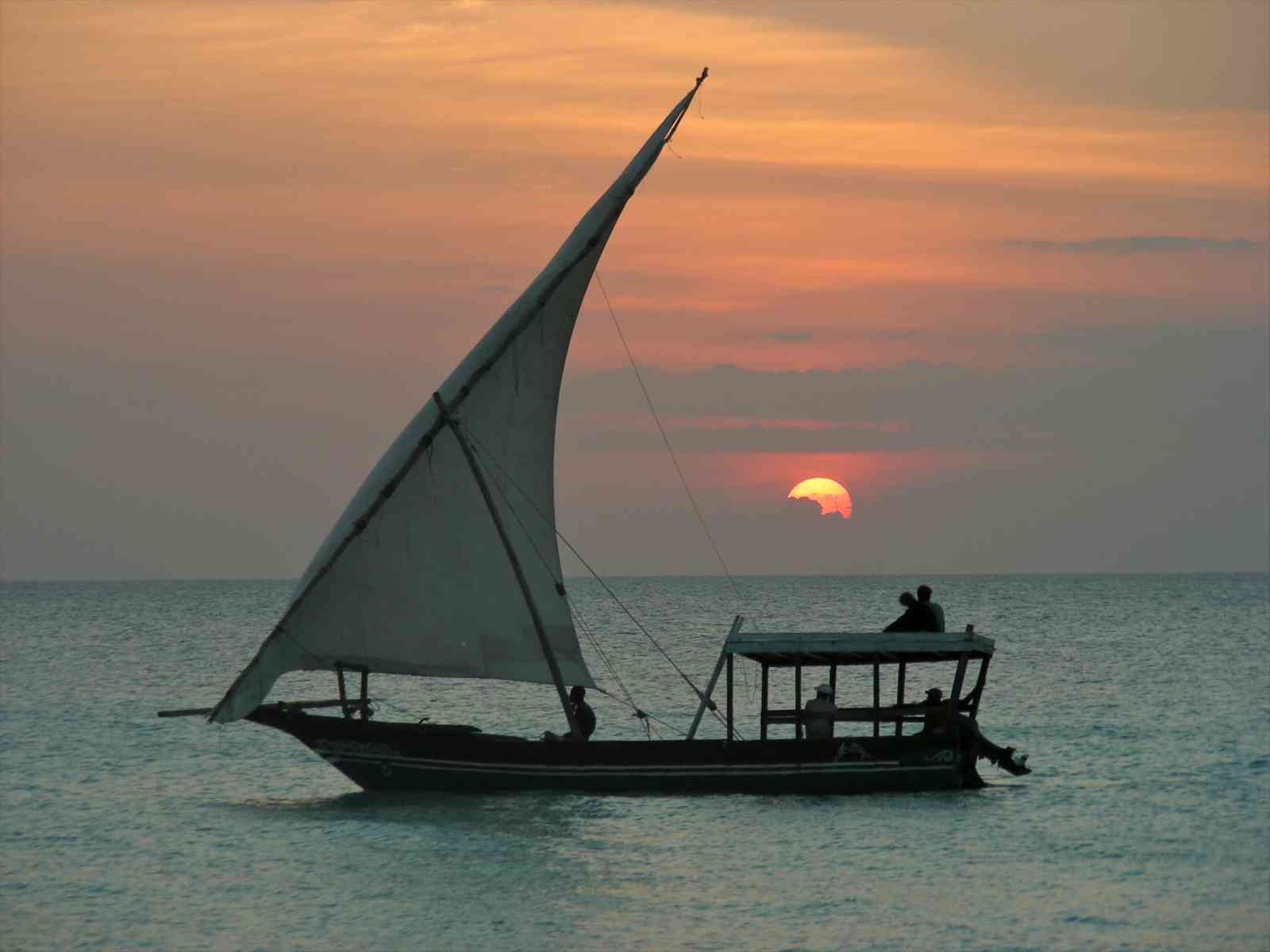 “The island certainly protects itself well from development,” said Laura, the Italian manager of Ras Mbisi, referring to the island’s rough roads and limited development.

“Mafia is not easily commercialised,” she insisted.

But this is its charm. Like most of the lodges on the island, ours skewed towards eco-friendly. The huts were made from locally-sourced coco-wood and its power was supplied by a biomass gasifier, in turn fuelled by waste.

Food was (mostly) produced locally and the water was heated using solar-power – one resource in abundance here. This was paradise without the pruning of awkward trees or the sweeping away of seaweed – self-sufficient and true.

Our first morning was spent looking for whale sharks, while the rest of the day I lay immobile in the shade, occasionally dipping in the sea to watch the fishermen working in teams to haul in their catch.

The next day I was keen to head east to witness Mafia’s other big draw: the coral reef. We travelled by taxi to Utende, a small village on the southernmost tip of Chole Bay, where most of the island’s accommodation is clustered, and which caters mostly to divers.

A still wind treated us to calm waters. I imagined little could compare with swimming alongside a whale shark, but snorkelling brought all the colours of the sea to life.

Across the Indian Ocean, much of its reefs were damaged by the 1998 El Nino hurricane, but the horseshoe Chole Bay largely protected Mafia’s coral against bleaching and destruction, and in the years that followed it has recovered well. 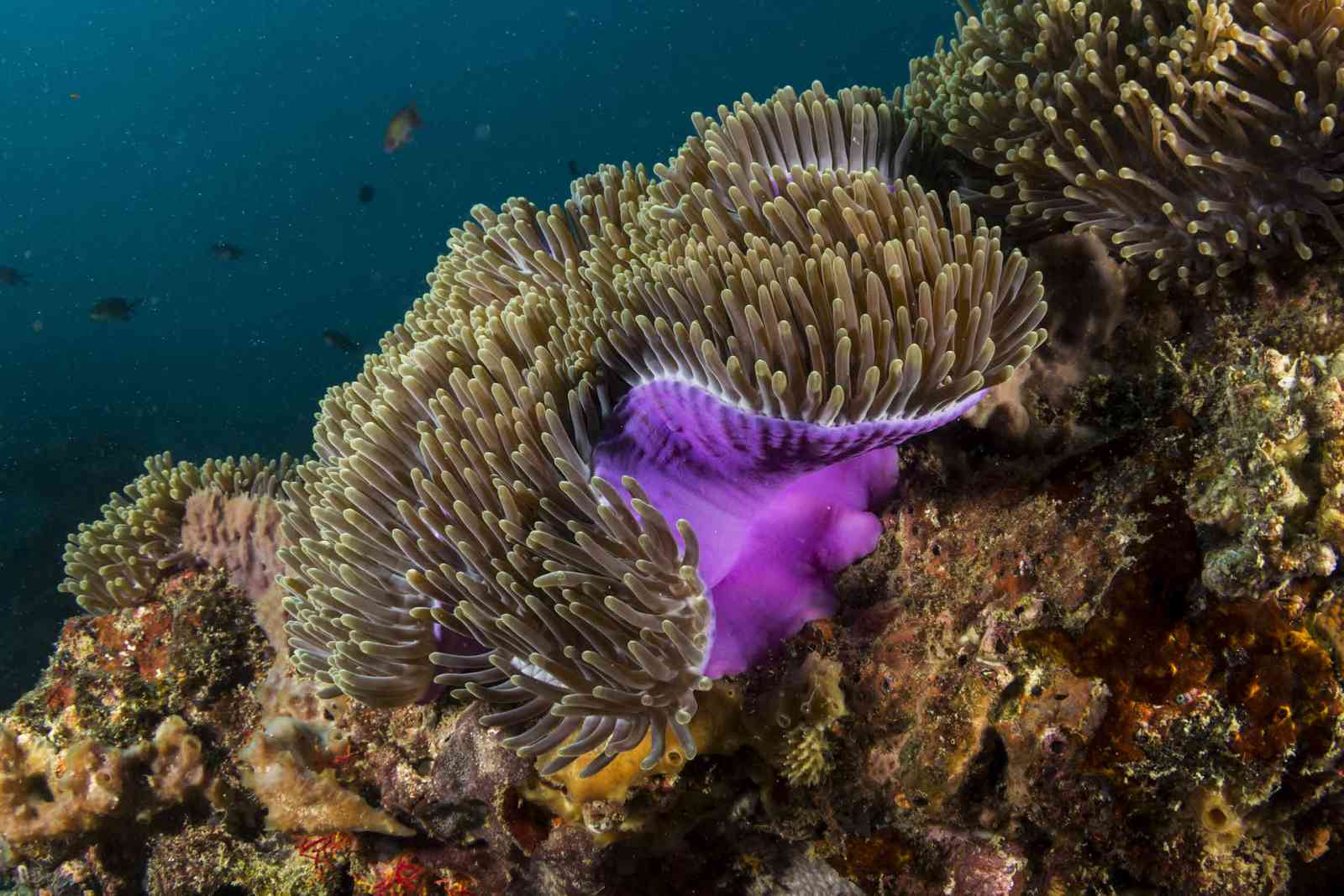 Anemone in the Indian Ocean (Dreamstime)

Gazing below me, clouds of fish breezed along, oblivious to my presence. Seahorses bobbed in the current above candy-pink starfish, as parrot, butterfly and angelfish glided past, as beautiful as their names implied.

The reef was so shallow in some parts that I had to be careful not to kick too hard, wary of my flippers colliding with the delicate coral. In other areas, the sea bed suddenly dropped away, leaving me floating above a seemingly bottomless chasm – a dizzying, exhilarating experience.

Taking a deep breath, I dived down a couple of metres. Hovering in the water, I felt like an intruder in this kaleidoscopic submarine world. My presence caused a sudden exodus of fish from a nearby crevice, darting in all directions. I stayed put, only to see a silver-grey pufferfish slowly emerge from a crack; it gawped at me in a bizarre face-off before I fled to the surface for air.

Back on land, I met up with Francesca, the Italian co-owner of eco-lodge Shamba Kilole, who runs it with her husband Marco. She set up here in 2008, but had been diving the waters of Chole Bay for years before that.

“The island is getting busier – it’s not what it was when we arrived,” she told me. But one person’s “busy” is another’s deserted. We wandered down from the lodge and walked past one backpacker hostel – empty – to another, again, empty. On the vacant beach, a hammock tied between two branches of mangrove swung lonely in the breeze. Francesca really had nothing to worry about.

We walked under the scorching midday sun along the mangrove-lined sands, where the vegetation was so thick in parts that you could be forgiven for not realising the sea was behind it.

My nose was soon awakened to the odour of fish. The only other person on the beach was a fisherman, who had speared his catch and left it to dry in the sun, preserving it to take to market.

Back at Shamba Kilole I met a mother and daughter from Sweden, who were doing a week of diving – they looked as surprised as me to see another traveller.

“You’re not going to tell the whole world about this place, are you?” the mother asked me, half-joking, when I told her I was a journalist.

I smiled, but it’s clear the lodges here have a dilemma. They need to appeal to more travellers for income, but zero crowds is the Island’s selling point – and what drew many of them in the first place.

Later, back at Ras Mbisi, we kayaked untroubled along the deserted shore and watched the sunset.

It’s rare for such an isolated place (especially one just 30 minutes flight from the mainland) to continue as such in this age of connectivity.

In Zanzibar, budget airlines have started offering US$10 flights, pumping the tourists in, but there is no indication things will go that way here. Somehow, Mafia and its whale sharks are still a well-kept secret – and hopefully will remain so for some time yet.