Climbing Mt Toubkal against all odds

Military veteran Tony Harris lost a leg after his vehicle hit a bomb in Afghanistan, but his ambition wasn't stifled by his adversity: five years later, he climbed Morocco's Mount Toubkal. This is his story

3 mins
For many months there was a sense of impending doom in the Harris household. Why had we so willingly chosen to climb the 4,000m Mt Toubkal? Why were we doing it in August when temperatures in Morocco could easily climb above 40°C? Would we be able to fundraise £2,000 for Help for Heroes and BLESMA? These questions still hung in the air on the Friday that my wife Elizabeth and I flew with Royal Air Maroc to Marrakech, to begin the mountain climb that neither of us thought possible just five years ago.

In 2009 I was a serving Infantry Officer in the Royal Regiment of Fusiliers on operations in Afghanistan. On 21 May 2009 my vehicle hit a bomb in the desert near Sangin in Helmand Province. The effects of the blast saw me evacuated to the UK and undergo more than 20 operations to save my left leg before it was eventually amputated. I never thought it would be possible to climb a mountain the size of Mt Toubkal, but with some encouragement from the team at Wanderlust and KE Adventure Travel my wife and I decided it would be our great adventure and that together we could overcome the challenges.

After our short and pleasurable flight we landed in Marrakech just before midnight, before being whisked away by our guide Mustapha to our hotel opposite the stunning medieval Koutoubia mosque. There was no time to enjoy the views, though: our 8am pick-up the next day would signal the start of our journey to the High Atlas mountains. The chaos, confusion and smells of Marrakech were soon left behind, and as we climbed the broken roads towards the village of Imlil the air was filled with scents of fragrant spices and herbs.

In the hustle and bustle of Imlil the streets buzzed with trade, mules and the many walkers (both Moroccan and international), either preparing to make their ascent or with faces flushed from the challenge of the descent they had just finished. Mustapha introduced us to our muleteer, Driss, who stowed our sleeping bags and warm kit on his hardy mule. Without further ado, we began the gentle start to the 10-mile hike that would see us climb 1,500m to our overnight refuge at the base of Mt Toubkal.


Despite the 30°C heat, the going was good over dirt tracks and rocky paths trodden down by centuries of human activity. The local shepherds were occasionally spotted high on the mountains that flanked the beaten path, and we were surrounded by the chatter of birds and city folk on the summer holidays making the trip to the shrine at the village of Aroumd, some way below the Toubkal range.

Early on, we realised that my prosthetic would require constant surveillance, so every two hours we would stop to allow me to carry out essential maintenance on my stump. This basically entailed drying the sweat off, applying talcum powder and ensuring that my stump hadn’t got larger or smaller due to the temperature. With each mile chalked off, we got ever-closer to our lunch which was being prepared by our muleteer (who had already shot off at a rate we couldn’t hope to match). 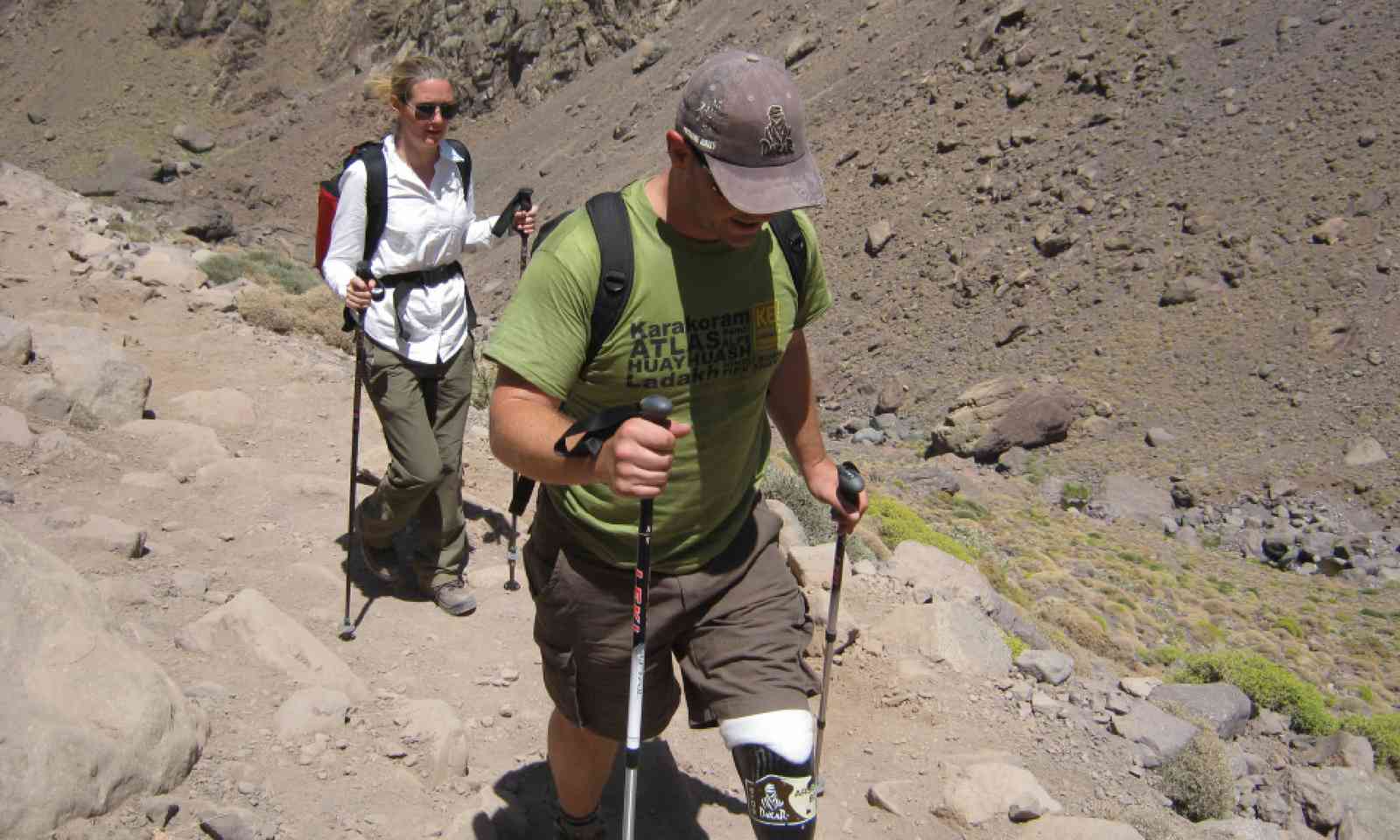 We were amazed when we were eventually greeted with a full Moroccan salad and one of the best tagines I have ever tasted – all prepared from the back of a mule in under an hour. The respite from the heat and dust was most welcome, and Mustapha conducted his prayers before we set off up the steeper and rockier track to the refuge.

As we dodged the mules on their way back down the mountain, the track narrowed and our legs were tired, but by 5pm we had reached our destination – after seven hours of arduous walking. The refuge is an incredible building which, from a distance, conjured up images of Tibetan temples, but on closer inspection was more akin to Alpine hostelries complete with showers, electricity from its own hydro plant, and (if you stood in one incredibly specific place) phone reception. The dorms were simple but comfortable, and consisted of huge bunk beds that stretched from wall to wall.

Over dinner, Mustapha explained the effects of altitude sickness and the rules that we would follow for our ascent and descent the next day. The dinner was surprisingly excellent and ensured that we would be able to replenish our levels before the early start to our summit bid the next morning. I was amazed at how well my leg had done that first day, although I was very glad for my wife’s massaging efforts on my damaged ankle. Sleep came quickly, and we dreamt of completing our ascent the next day.


In what seemed like the blink of an eye, our alarms woke us at 4am, and after a brief but filling breakfast we began our ascent. Unbelievably, I had forgotten my head torch during our repacking at the start of the trip, and Liz’s torch flatly refused to function at anything like a practical level. Fortunately, Mustapha came to our rescue as he pulled out a spare torch, handed Liz his own torch, and proceeded to climb with Liz’s torch barely lighting the route for him.

The early morning darkness and altitude ensured that the temperature was cool enough to wear a soft shell jacket, and we made steady progress through the first 200m of the climb. But as we cleared the boulder field and went to enter the valley that would lead us onto the ridge below Toubkal, we were all knocked flat by a gusting wind. We had to hold on to the rocks around us, and the wind chill crashed through our clothing and chilled us to the bone. More warm kit was applied, gloves were fitted, and we drove on in to the face of the wind. The constant barrage made us slower, but step-by-step we were able to push on – bolstered by the fact that we wouldn’t have to stop to clean the sweat from my stump. 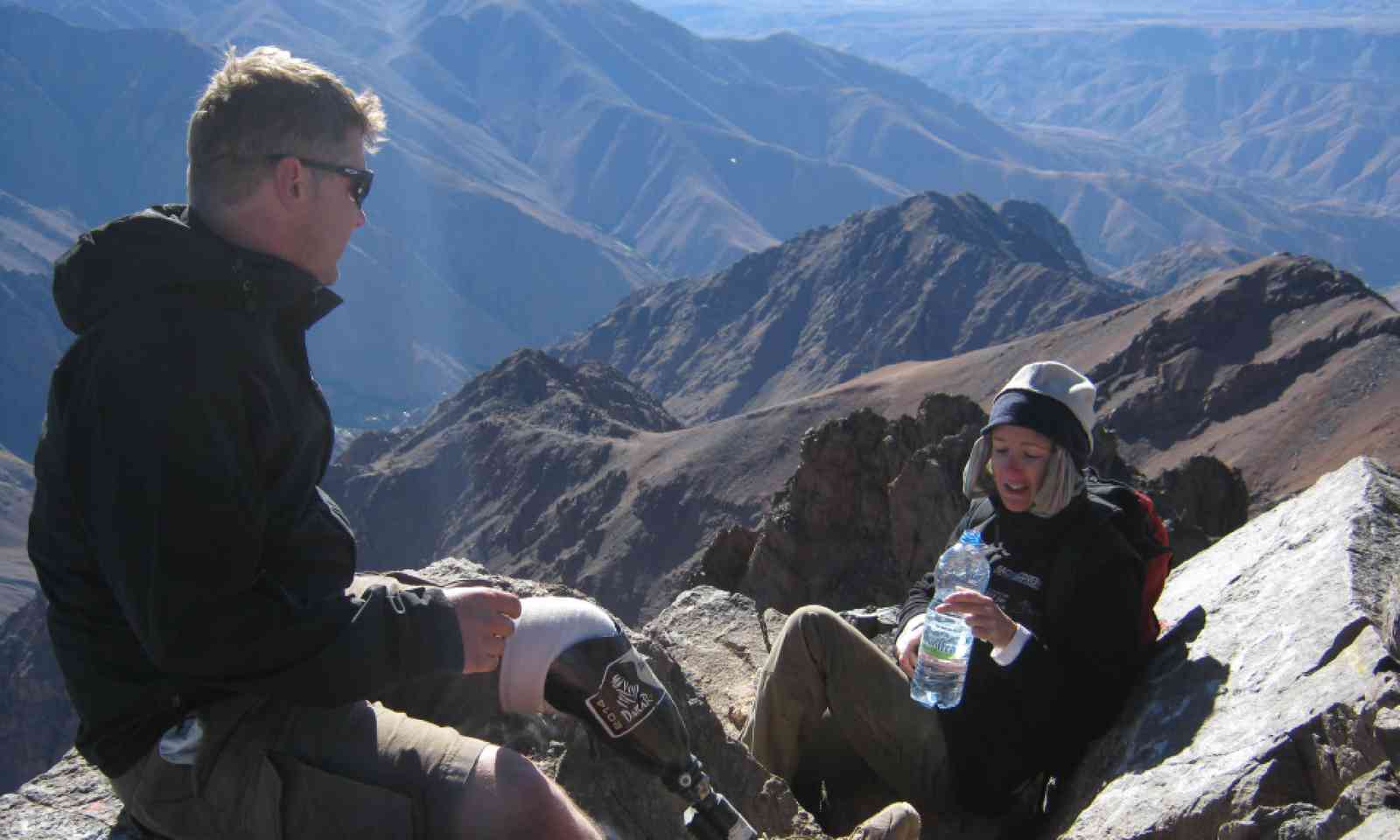 As the sun began to creep over the mountains, the valley came alive and we found renewed vigour. Just four hours since we set out, we were within a few hundred metres of the summit, and traversing the path that led to our end goal. Liz was feeling the effects of the cold she had brought with her from England coupled with the freezing wind, but she put her head down and ploughed on until we both broke on to the small plateau that is the summit of Mt Toubkal.

I cannot tell you how elated we felt after five years believing that it would be near impossible for my foot to put up with a 4,000m climb. In just 24 hours we had managed it with the help, encouragement and support of our KE Adventure guide Mustapha. The view was incredible, with sheer drops, weather-beaten valleys and majestic peaks surrounding us. In some directions you felt like you could see for hundreds of miles, in others you could see more mountains challenging you to climb them. It was breath-taking.

After the obligatory photos, it was time to begin the most challenging part of our journey: the descent. Both Liz and I knew that this was going to be a gruelling test of mind over matter as my prosthetic leg wouldn’t be stable on the loose mountain side – so my damaged right leg would have to bear the majority of the load. Mustapha came to the rescue again by roping me on to him and taking a portion of the weight every time we came to a suitably large drop or when my feet slid from under me.


As we slowly made our way back down, the temperatures rose and my leg got sweatier, but it was as if every other climber knew how to keep us going: we were greeted with rounds of applause and praise whenever we encountered another group. To all those strangers I can only say thank you: you helped more than you will ever know.

We paused shortly at the refuge for a light lunch with succulent fruit and much-needed cold water, before ploughing on downwards – ignoring the screams of protest by my bloodied stump and the inexorable fatigue of walking over 30 miles in 36 hours. Every time I seemed to be slowing, Mustapha was there with a cry of “Agado” – a term typically used to encourage the mules to go faster, but one that seemed entirely appropriate given the situation.

Step by step we edged closer to Imlil. The temptation of asking for a mule was always there in the back of my mind, but we persevered until eventually we were back in the cool surrounds of the river bed we started in just the day before. We were tired – both physically and mentally – but we were unbeaten.

Climbing a 4,000m peak was the most challenging physical activity I have done since losing my leg, but it was hugely rewarding and has given me an insight into my determination to succeed. It has given me the mental preparation that I will need for the Invictus Games this year and, I hope, the attitude towards succeeding that will see us win as a team.

My sincerest thanks to KE Adventure Travel, our guide Mustapha, our muleteer Driss, Wanderlust and Royal Air Maroc for making this ambition a reality. If you would like to support our fundraising efforts, I would be eternally grateful if you could donate.