The romance of the road: 7 vintage vehicle tours guaranteed to get your motor running

With Citroen’s beloved 2CV enjoying its 70th birthday, we look at the quirky, romantic and downright fun tours you can do around the world in equally famous vintage vehicles

1: Swing around London in a classic Mini Cooper 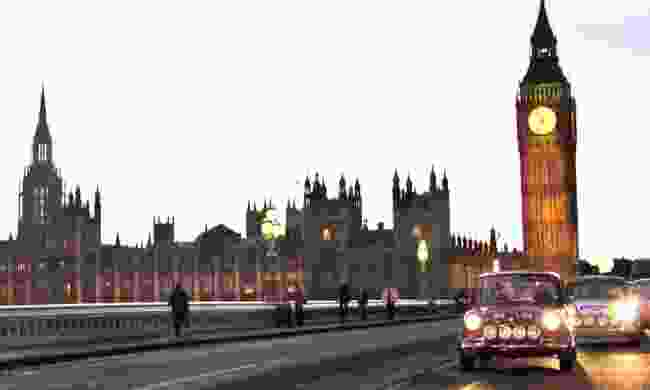 Mini in front of Westminster (smallcarbigcity.com)

What better way to negotiate the crowded streets of London than in an iconic Mini Cooper? Fun, cheeky and lively, the Mini was the vehicle of choice in Swinging London in the Sixties and captures the carefree spirit of that time perfectly.

London-based tour company, Small Car Big City, offer tours around the landmarks of the city in beautifully restored vintage Mini Coopers for both groups and individuals. Their one-hour Landmarks of London tour takes you past all the major sights while their four-hour Italian Job tour drops by markets and famous street art, as well as a stop for a strong coffee in an authentic Italian cafe. 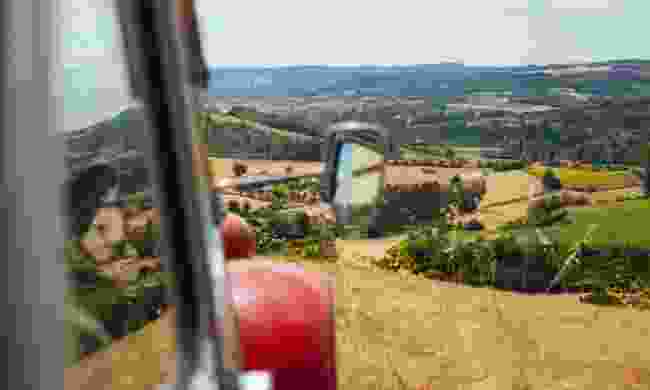 A 2CV in rural Tarn (Toruisme-Tarn.com)

In 2018 France’s legendary 2CV (pronounced deux-cheveaux or ‘two horses’) celebrates its 70th birthday. It was designed to carry four people and 50kg of goods at 30mph across muddy and unpaved roads. It quickly became an affordable rural work horse and captured the heart of the nation with its unmistakable gallic charm.

In the rustic fields of Tarn, in south west France, it is still possible to enjoy riding in a 2CV in it’s natural environment. AutoTour GlouGlou offer a half day 2CV road trip through the braided fields of Tarn, visiting two winemakers, Cave de Labastide and Château Bouscaillous, receiving a complimentary bottle of the locally produced wine in each. The trip ends in Mas Pignou, famous for its spectacular views over the region, and costs €20 per person.

3: Break down walls in Berlin in a Trabant 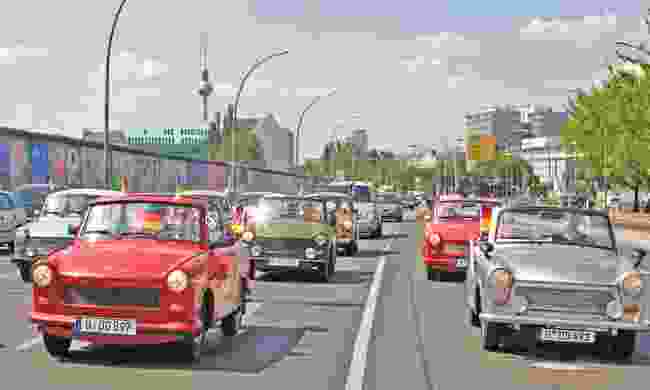 Nothing says Cold War Berlin more than a Trabant, the ubiquitous, boxy car made by the VEB Sachsenring car company in East Germany. Ugly and unreliable, the car become an unlikely symbol of hope when East Germans took to their Trabants in their thousands to cross into West Berlin when the wall that had divided the city finally came down.

Trabi World offer a Trabi Safari through the east of Berlin, visiting both the major sights and getting well off the beaten tourist path in one of their restored Trabants. It’s a necessarily slow-paced trundle through the east part of the city along the Karl-Marx-Allee and East Side Gallery, over Oberbaumbridge and through the quarter Kreuzberg. There’s a maximum of three adults per Trabi – they can’t haul more than 330 kilograms!

4: Lose yourself in Tuscany on a Vespa 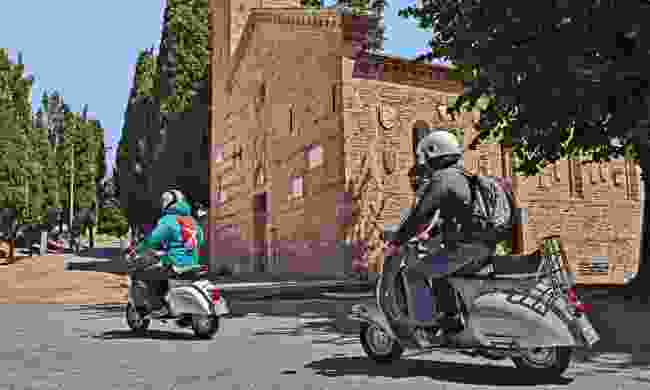 Riding a Vespa through Tuscany is a fully immersive way to experience this beautiful part of Italy. You’ll feel the sunshine on your skin. You’ll breathe in the heady aroma of freshly cut hay and be dazzled by the bright fields of sunflowers and quaint hill top towns. Even the sound of the engine adds to the romance – reminiscent of a busy bee happily buzzing through the fields.

Florencetown’s Tuscany by Vespa tour was the first in the Chianti wine region and has been enjoyed by over 15,000 customers. Starting in Florence, you’ll wind your way through the country roads of Tuscany, dropping by ancient towns and equally ancient wineries. Each tour is accompanied by a support Ape (Tuscan Tuk Tuk) so if you don’t feel like riding a scooter you can still enjoy an adventurous day through Tuscany as a passenger in one of these vintage vehicles. 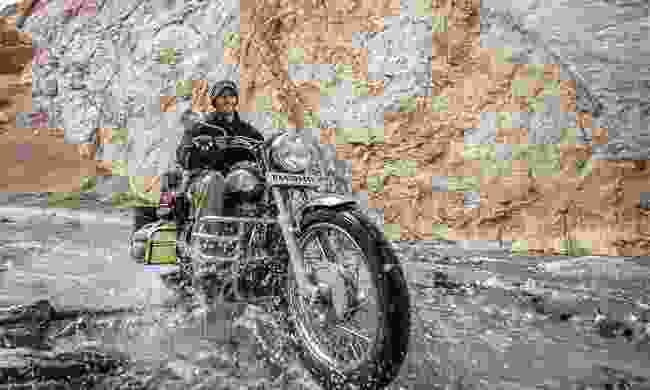 Rudimentary and brutal, the legendary Royal Enfield motorcycle is perfect for India. It was first used by India’s police and army to patrol the country's rugged borders. In 1955, Enfield India was created to manufacture the bikes in Madras where they are still being produced today.

Riding a Royal Enfield amid the high peaks of Ladakh or across the deserts of Rajasthan is one of India’s greatest adventures. Many adventurous souls travel to India, buy an Enfield, ride around the country and then bring it home with them. If that’s too hardcore, Vintage Rides offer a selection of tours across India, from high in the Himalayas to deep in the south, in the company of a knowledgeable guide and a back up team to deal with any repairs needed, offering offbeat destinations and adventure – all in complete safety. 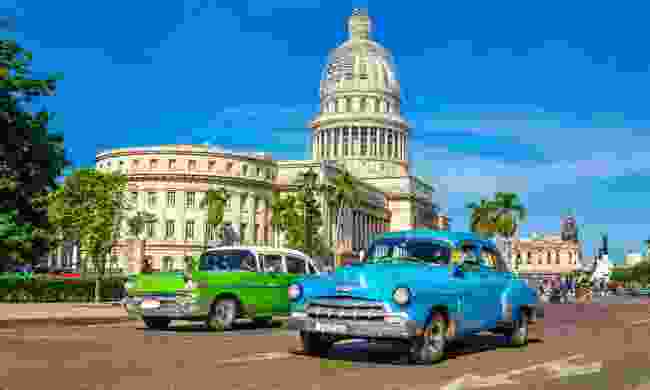 Havana’s huge fleet of classic American cars – or coches Americanos to the locals – are an integral part of the city’s crumbling charm, Often referred to as the ‘Galápagos of the car industry’, riding through Havana in one is like travelling back in time to the 1950’s.

They are also a testament to the ingenuity and resourcefulness of their owners. In the face of a US embargo, owners were forced to improvise repairs without access to replacement parts. Recent estimates say there are still over 60,000 on the road in Cuba.

Riding in one is fairly straight forward. Many are used as taxis, with drivers parking outside hotels and well-known landmarks like the National Capitol Building to entice tourists. If you’re looking for something a little more structured, Havana Vintage Car Tours offer a selection of city tours around the best known sites, with a knowledgable driver as your guide. A three-hour tour in one of their beautifully restored Oldsmobiles starts at 150 CUC. 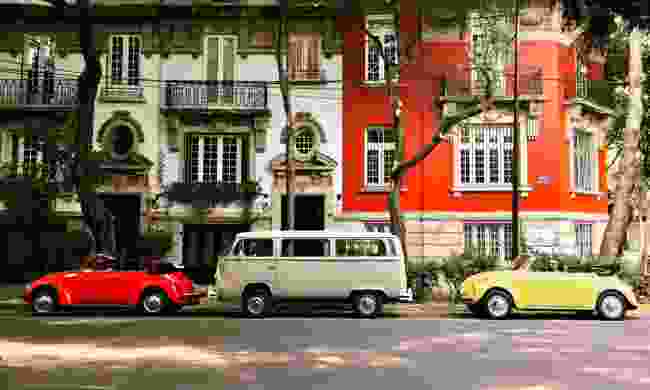 The world may think of the VW Beetle as an undeniably German icon, but anyone who has travelled in Mexico City traffic will tell you different. The city’s green-coloured Beetle taxis are ubiquitous.

First introduced in 1954, and manufactured in Mexico for decades after production stopped in Germany, the Beetle is intimately intertwined with Mexico’s modern history. The Travelling Beetle offer theme-driven tours of Mexico City in vintage Volkswagens, focussing on the city’s stunning architecture, art, food and vibrant neighbourhoods, all in the company of a knowledgable and enthusiastic guide. Whether Mexican street food or the art of Frida Kahlo and Diego Riviera is your bag, they’ve got the tour for you.