Chris Tarrant is perhaps best known as the host of Who Wants To Be A Millionaire?. In the new Channel 5 travel series called Chris Tarrant: Extreme Railways, the radio and TV personality asks a fundamentally more interesting question: 'Who wants to ride the world's most dangerous railways?"

Over three action packed episodes, Chris finds himself stuck in the heart of an African jungle, crossing the Australian Outback and exploring the coast of India. He meets the drivers, engineers, local characters and fellow passengers and finds out how these extreme railways were built, how they are kept running and how they change the lives of the local people they connect.

He talks to Peter Moore about the challenges of making the series. And the best thing to do when an Indian transvestite flashes you his bits.

Having watched the first episode about the Congo, I can vouch that your new show, Chris Tarrant: Extreme Railways, lives up to its name.

It was unbelievable. When they said to me “Show One, I think we’ll go to Congo,” I said “Congo? Are you mad? We’re all going to die.” But it was OK. You kind of felt safe hanging around your hotel room at night. You didn’t go wandering around dark areas at night at 3 o’clock in the morning, but to be honest, you wouldn’t do that in London.

It was just the railway system. It was just an absolute shambles. The train we were catching was six days late and then it broke down in a tunnel at 2 o’clock in the morning.

Was that your scariest moment?

Yeah. We thought “We are now walking down the middle of a railway line, in the middle of the night, in the Congo.” You can’t get much more extreme than that.

The conductor told us that the train was going to be broken down for at least the whole night, and I thought “I really don’t want to be spending the night on this train” and then all of a sudden another train came along to pick up the broken down train and towed it to the next station. I don’t know how they’d communicated to each other.

What worried you most about your Congo train journey?

That they hadn’t done any serious upgrading of the tracks for decades. They’ve got a brand new train on one section, but the same old track. They had very serious derailment five or six years ago, where 90 people died. We were basically on the same line on a brand new train, doing 100 miles an hour, but thinking “Yeah, this is all very nice, but the rails are exactly the same ones that were in use when they had the derailment.”

We went out on the tracks a couple of times on a little maintenance vehicle, a mini truck thing, and Sam the cameraman and I were looking down the side of some of the ravines and looking at the state of the track and thinking “Shit! This is not very clever!” So, again, it wasn’t scary being in the Congo. It was more about the state of the railway.

How did the Congo trip compare to rail journeys you’re used to?

My local station here is Pangbourne, in Berkshire, which is really rather nice. When I went to the Congo I generally thought I’ll go down and get on the train, buy a First Class ticket and it will all be rather very pleasant. What you don’t expect is to come across 1,500 people waiting for the same train.

When my 11.02 comes into Pangbourne, and it is generally on time, we’re fully loaded on our way by 11.03. In the Congo, not only is the train days late, it takes several hours to load the train.

I’ve never seen anything so congested in my life. There were whole families sitting on the couplings between carriages – mum, dad and the children, all smiling. How dangerous is that, not to mention extremely uncomfortable? 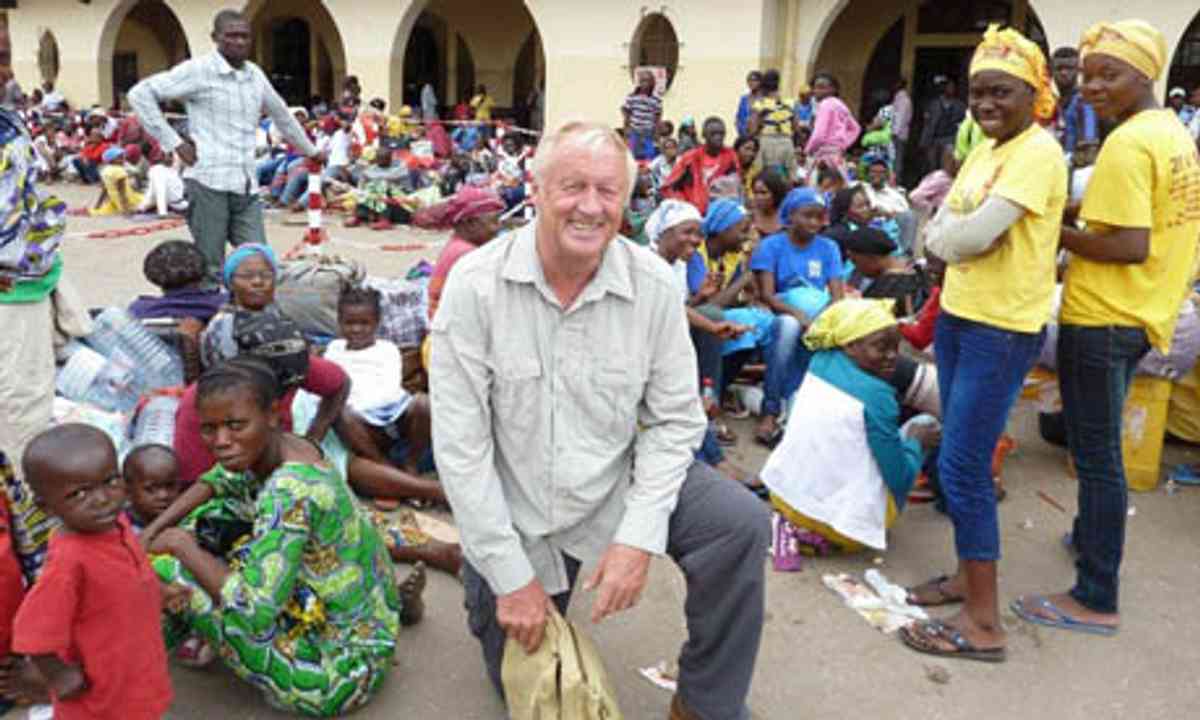 It sounds like it was a real eye-opener for you...

I suppose what it did was demonstrate the theme of the series, which is how amazing railways can be in these parts of the world. Without this railway in the Congo, most of those villages would have no connection with the outside world. There are no roads. If you needed supplies from the next town, you’d have to walk, no matter how much stuff you had to carry. So, the only way to get there and back is on this train, even if you have to sit there for four or five days.

In England, if a train is not running or you think, “I’ll get in the car and drive up to Manchester.” Or get a flight. In the bloody Congo you’ve got no chance. There are no alternative forms of transport, and, if there was, you wouldn’t be able to afford it anyway.

Not that the new train is that affordable anyway. The ticket for the new train from Dolisie to Brazzaville cost £27. I thought it was fantastic. But what you realise is that for most of these people that is half their annual wage. There is just no way they can afford it. So, already, the new train has problems.

There is still the old train...?

Sure, the six-day-late one is affordable but it’s in a dreadful state. We couldn’t film out the window because they were so caked in mud and God knows what else.

The lavatories. Oh my God! They were disgraceful. Even the locals barely use the bog themselves because it’s so disgusting. As soon as you get to a station, everyone, men and women, pull down their pants and wee on the line.

In the second episode you travelled to Central Australia.

Yeah, we went right up from Adelaide to Darwin. Basically did the entire Australian continent from south to north. First, we went on the Ghan. Then we looked at the old Ghan line, which is very different. We caught a steam train on that.

For the next bit, we travelled by four-wheel drive, which isn’t a railway, but I tell you what, it was unreal. You go for days without seeing anyone. One day I drove from eight in the morning until about nine o’clock at night, and over the entire day I saw two cars. You can’t do that on the M25. It was unbelievable.

And you missed the new Ghan.

We arrived in Alice Springs to catch the new Ghan for the last leg of the journey up to Darwin, and the Ghan had gone. The office was locked up and the next train wasn’t until the next week. So I got a ride on a bloody big freight train. 22 hours in the cab of a freight train – just me, the cameraman and the drivers. It was a real adventure.

There was nowhere to sleep so I stayed up all night. My eyes were staring out like corks, staring at this line. We were battering along, really going. There were kangaroos coming onto the line from all angles.

It’s a real problem out there. They hit kangaroos. They hit camels. They hit cows. They can’t stop. It’s a massive train, a huge long thing. The tonnage must be terrifying. We hit a dingo in the middle of the night. Absolutely splattered it. But the driver said there was no way he could stop, whether it’s a human or whatever, he just keeps going.

The final episode is set in India.

We went from Mumbai down to Mangalore, the monsoon bit, in the west of India. It’s the first railway they’ve ever had in that part of India. There are British built railways all over India but they didn’t build one there. It was too inaccessible and there was always the monsoon to deal with.

It’s a fantastic railway. Some of the visuals from this episode are just stunning, especially the massive aqueducts. It has completely opened up this whole area of India for people who otherwise would not been able to go anywhere in their own country.

What was the most extreme thing about your Indian railway journey?

Just to give you an idea, I’ll compare it again with my local station. They say “The train coming in at 11.03, scheduled to come into platform one, is now coming into platform three.” So we all go down the subway or over the footbridge. In India, they just run across the line. And I’m not talking just one bloke. I’m talking hundreds of people. Kids on their shoulders, goats, whatever, all just race across the track.

We filmed one bit, it was terrifying. All these people, running across in front of an oncoming train, tooting its horn like mad. Yet somehow, they survived. I honestly thought we were going to be filming a catastrophe.

How did you find life onboard an Indian train?

It’s great. The train is full of people all the time, getting on and off, trying to sell you things; selling you curry, selling you a drink.

At one point I was accosted by a very strange drag act, a transvestite. Apparently, they come on and curse you, and if you don’t give them money they won’t lift the curse. So I had this terrifying creature – I couldn’t tell if he was man, woman or beast – curse me, then lift up their skirt and show me their bits and pieces, until I gave them money. It was like that every day in India. I never knew what was going to happen next.

Your train ride in the Congo was pretty lively too...

Yeah, there was those missionaries singing in the carriage in the Congo. It was very impromptu. We had some of that in India as well, they were going to some religious festival – the wailing and singing and beating their drums.

Mainly, in good old England, we get on a train, we sit there, we read our paper, stare straight ahead and no one speaks to anyone else. It’s part of the English stiff upper lip. India, Congo, and, to a certain extent Australia, because they like a chat too, everyone talks to everybody and has an opinion.

If you had to nominate a favourite moment from the series, what would it be?

I think it would be the breakdown in the middle of the tunnel in the Congo.  I remember thinking it doesn’t get much more extreme than this. What have I signed up for here? It’s 2 o’clock in the morning. I wasn’t tickled pink about it at the time, but looking back I think it’s an amazing bit of television.

The first episode of Chris Tarrant: Extreme Railways will be broadcast on Channel 5 on 5 December at 9pm. Don't miss it.