The young Cagol family take on fast flowing rapids and a bleak, beautiful landscape and emerge with new found confidence ... and maybe a diamond or two

We headed out of Cape Town early as we had a long drive ahead. The plan was to drive all the way to Namibia and camp at Amanzi Campsite where we would be starting a 4-day canoeing trip down the Orange River. The Orange River is the border between South Africa and Namibia, our camp overlooked the river and South Africa just on the other side. The kids were intrigued how two countries could be divided by a river.

Our guide for the next four days was Mario. He came from the local village and had been guiding trips down the river for 5 years. He called by our camp the night before our trip to drop off the canoes and buckets for us to keep our possessions in for the next four days. There was no one else booked onto the trip, he said, so we’d have the river all to ourselves. 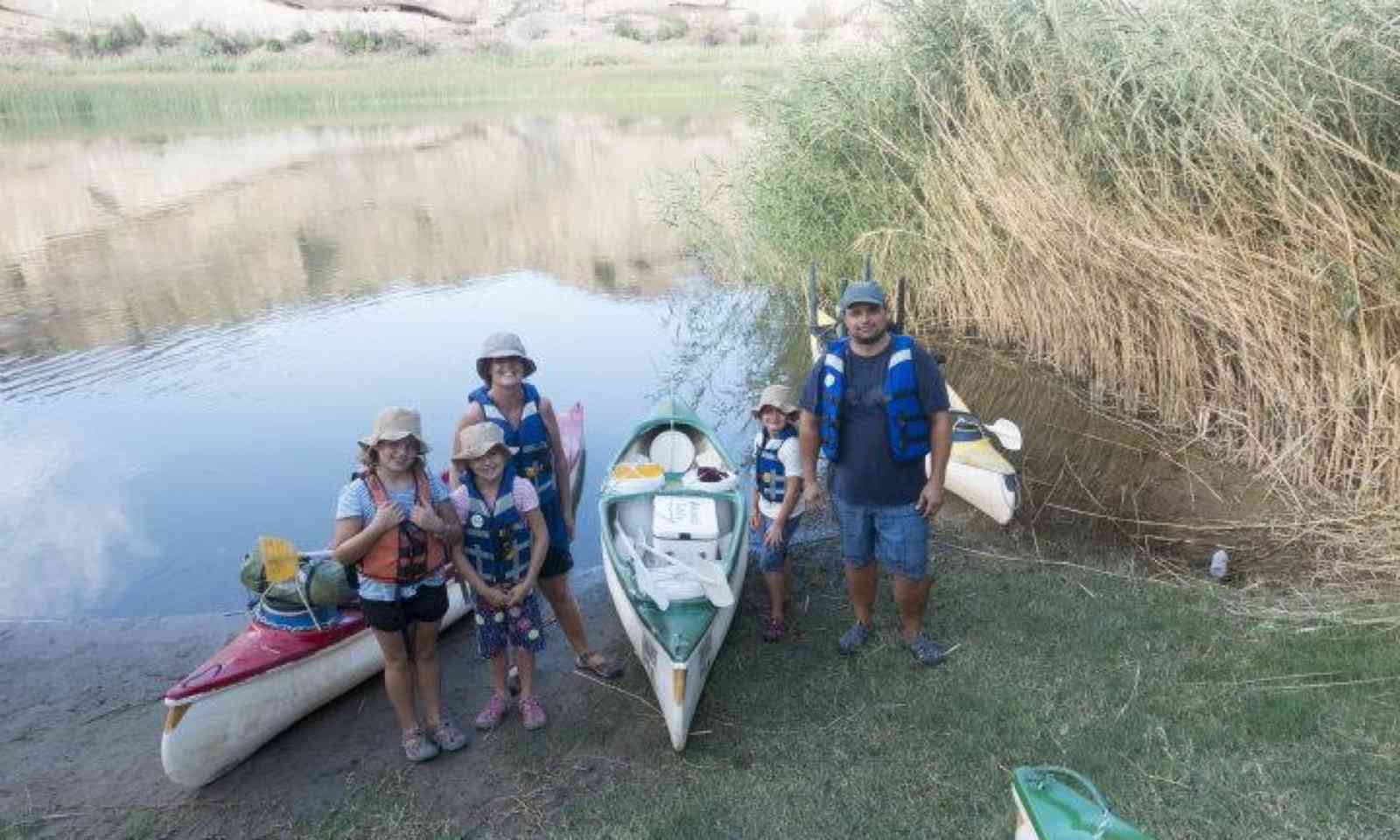 The next morning we slid our canoes down the bank and set off along the river. I paddled with our son, Luca. My wife, Edwina, paddled with our daughter Arabella. And our other daughter, Maddalena, got to paddle with Mario and Tuku, our other guide for the trip. Tuku who takes in his canoe everything but the kitchen sink, he would go ahead in the rapids and provide directions for us.

It wasn’t long before we came upon our first rapid, a manmade weir, that had to be navigated on the left hand side. Edwina and Arabella started to drift to the right, and when Tuku shouted "LEFT, LEFT", Edwina started paddling on the left which, of course, moved the canoe to the right. Tuku leapt into the water, swam to Edwina's canoe and pushed it to the left, preventing it from capsizing.

Mario and Maddalena made it through the weir unscathed too, but as Luca and I entered the rapid the canoe span to the right. I could not correct it and the canoe capsized. My initial reaction was to find Luca. He is nearby and I grab onto him as we float down the river.

"I didn't want to capsize," said Luca, as he bobbed up from under the water.

"Not much we can do about it now," I replied.

We drifted down river until we found a spot where we could get back into the canoe. It takes a few attempts but finally Luca and I scramble back into our canoe. 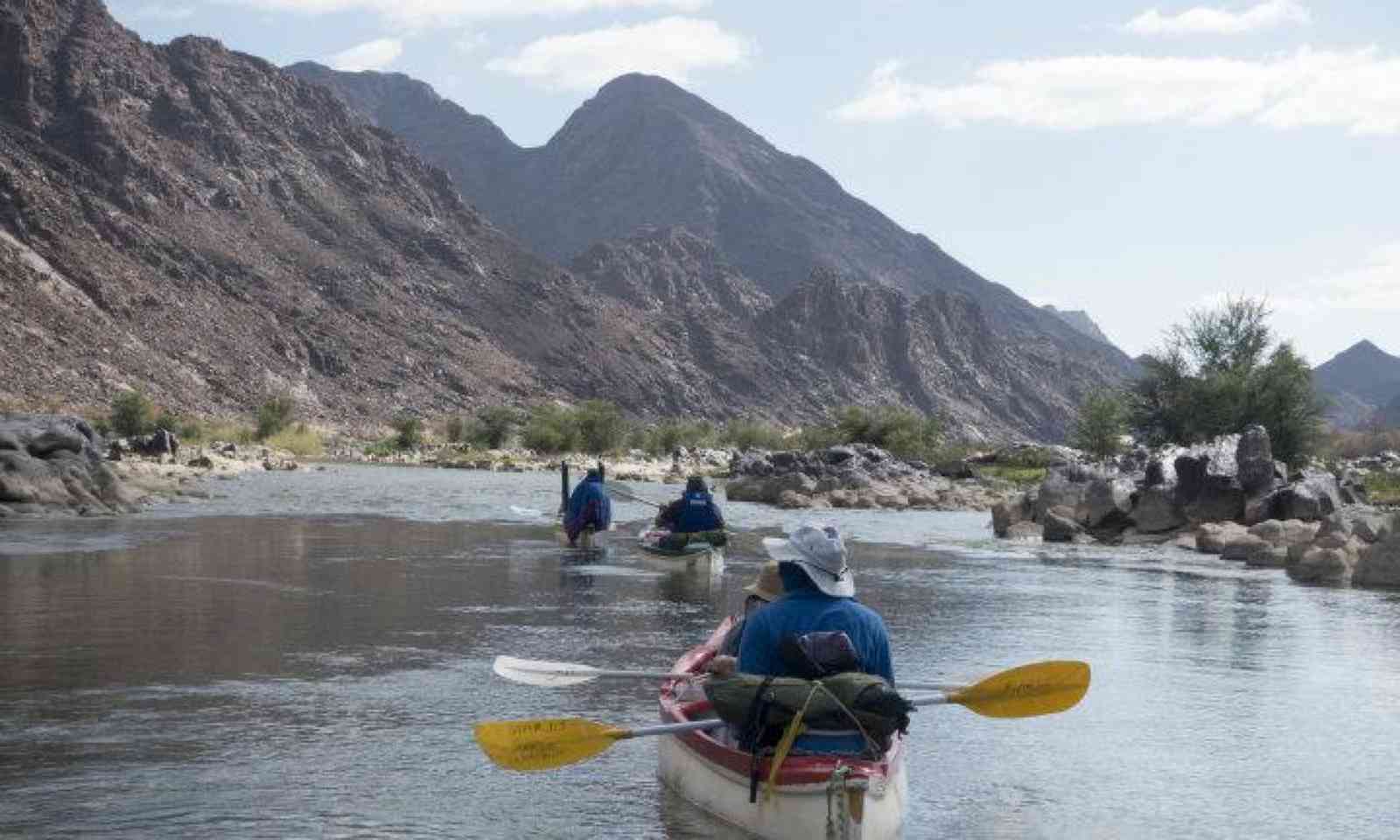 The Orange River wound its way through the dramatic and rugged Richtersveld Mountains. We would be canoeing 62 kilometres of it, averaging 15 kilometres a day, with the aim of setting up camp by around 3pm each day. The scenery we paddled through was surreal and at times it felt like we were on a different planet. Luca said it was like we were canoeing on Mars.

After the excitement of the weir, the rest of our first morning was a gentle paddle. After 3 hours on the river we pulled up and a sandy bank where our guides got a fire going and cooked some hotdogs for lunch. The kids were stoked and managed to gobble down two each.

Things got a little trickier after lunch. A head wind picked up, making it very difficult to manoeuvre the canoes. If the canoe was blown side-on, it was almost impossible to get it to face forward again. In the end, our guides lashed our canoes to theirs to stop us spinning around.

After a couple of hard hours paddling we pulled into to our first camp. We had hired tents, sleeping bags and air mattress for the trip and we immediately set about putting up our tents. The kids managed to set up their own tents, whilst the guides blew the airbeds up.

You certainly have to give credit to the guides. After getting us down the river they built a campfire and cooked dinner. And it was delicious too: pan-fried chicken breast, baked potatoes and salad. There were marshmallows too, so we  spent the night toasting them, staring up into the night sky as the kids pointed out the constellations that I had taught them. Each of our kids battled to point out the constellations first –  " Southern Cross!", "Orion's Belt!", "Alpha Centauri!” And so the list continued.

The next morning we packed up while our guides cooked Boerewors sausages and toast on the fire for breakfast. We set off at 9 but it wasn’t long before we pulled over again for a safety briefing. The second biggest rapid on the trip lay just ahead and our guides wanted to make sure we were properly prepared.

The rapid looked tough, and after capsizing the day before I have to admit that I was feeling hesitant. I am mostly worried about Luca and how I would be able to get him out. Part of me hopes he doesn't want to do it so I don't have to worry about him.  I look at Luca and he says "I want to do it". 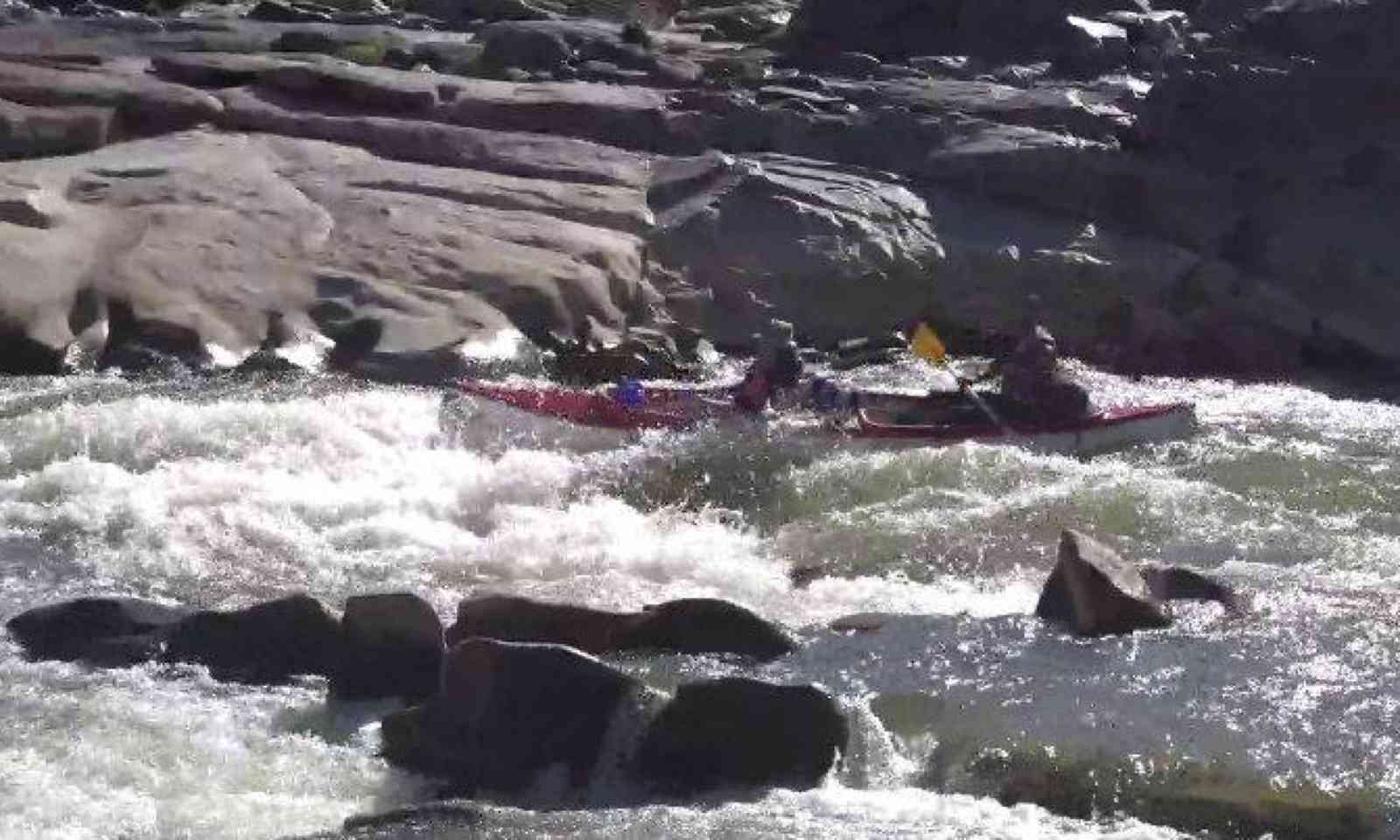 Preparing for the worst, and take my t-shirt and hat off, get into the canoe and make sure everything is strapped down. Tuku shouts directions as Luca and I paddle intensely: Left! Right! Back paddle! Right! Before we know, we are through the rapids and punching our paddles in the air with a huge shout of joy.

Mario, our guide, takes Arabella through and makes the rapid look extremely easy, but that doesn’t take away from our sense of achievement.

We paddle for a few more hours, stop for lunch – tuna mayo with salad in pita bread – and then continue on. The landscape here is desolate but we pass a few farmers tending to their goats. Mario gives them the leftovers from our lunch, which is greatly appreciated. In the afternoon we negotiate some smaller rapids, get stuck on a few rocks and bring the water pistols out. Water fights ensue between the canoes and, later, we make it to the second camp. 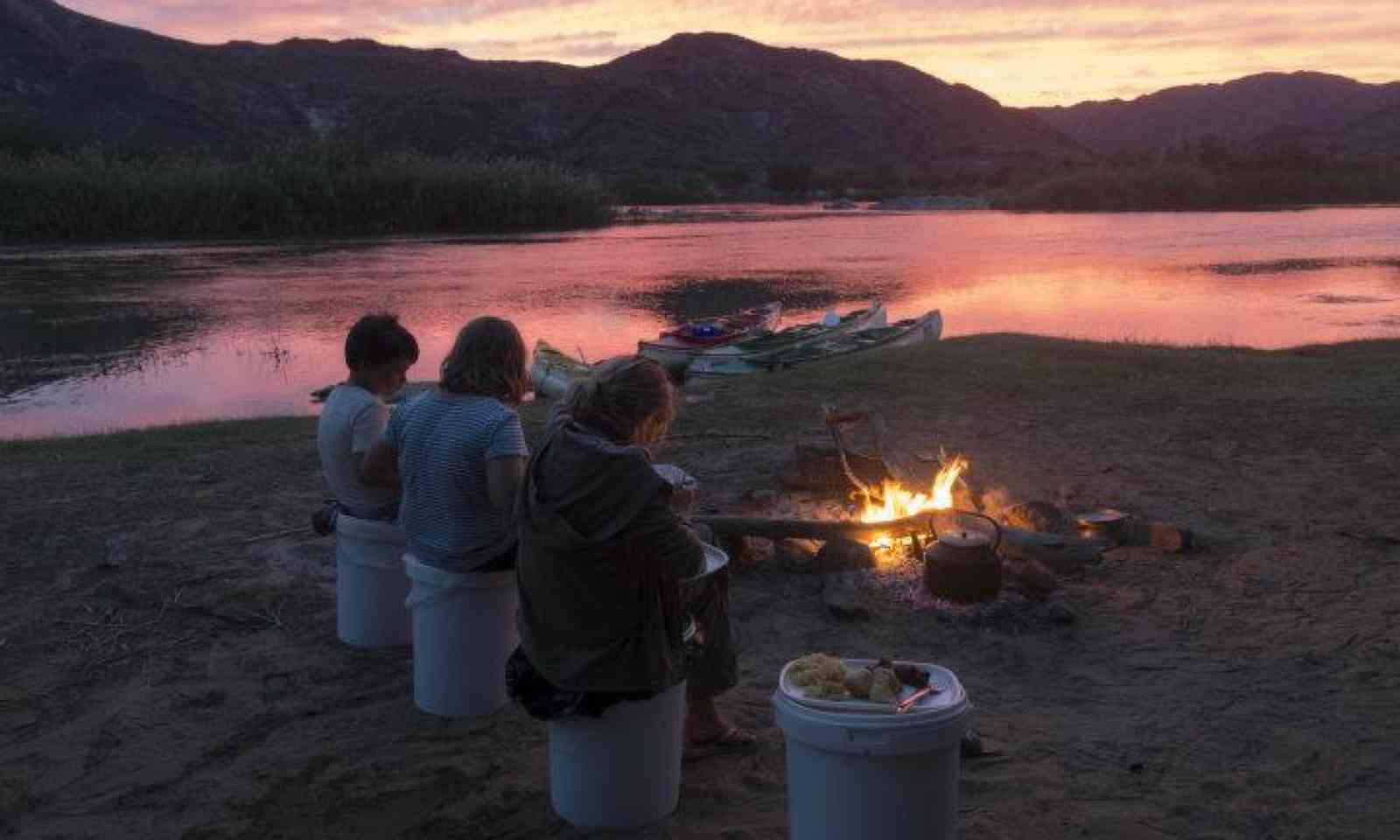 As Tuku made dinner, the kids try their hand at fishing with Mario. Over dinner we witness the reddest of sunsets and sit round the campfire telling really bad jokes. Mario's tells us stories about his life and his family and the goat farm he runs when he is not out on the river. Before bunking down for the night, the kids point out the constellations again and spot some shooting stars. We all sleep extremely well.

Day 3 dawns and with it comes our biggest challenge – Sjambok, the largest rapid on the river. Mario explains that Sjambok is a fast flowing rapid, with a big drop (T-Bone) that shoots you directly into a rock. After the mandatory safety briefing, Arabella and Maddalena want to go with our guide, Mario, Luca decides to go with me and Edwina decides to give it a miss and video us all coming down instead.

Tuku goes first and sets himself on a rock above the T-bone, ready to rescue any of us should we get in trouble. Next, Mario and the girls. Then me and Luca, close behind.

For the first part of the rapid, Luca and I simply followed Mario, weaving in and out of the rocks. But as approached the T-Bone I was we were on our own.  It was my first view of this part of the rapid and my initial reaction was that we were sure to capsize. Miraculously, as we got to the rock, Luca and I both back paddled hard and somehow missed the following rock. Again, shouts of joy go up – we had all made it through safely – and the delight in the kids eyes after the experience was brilliant.  Later the guides told us that over 70% of people don't make it, so big ups to us. 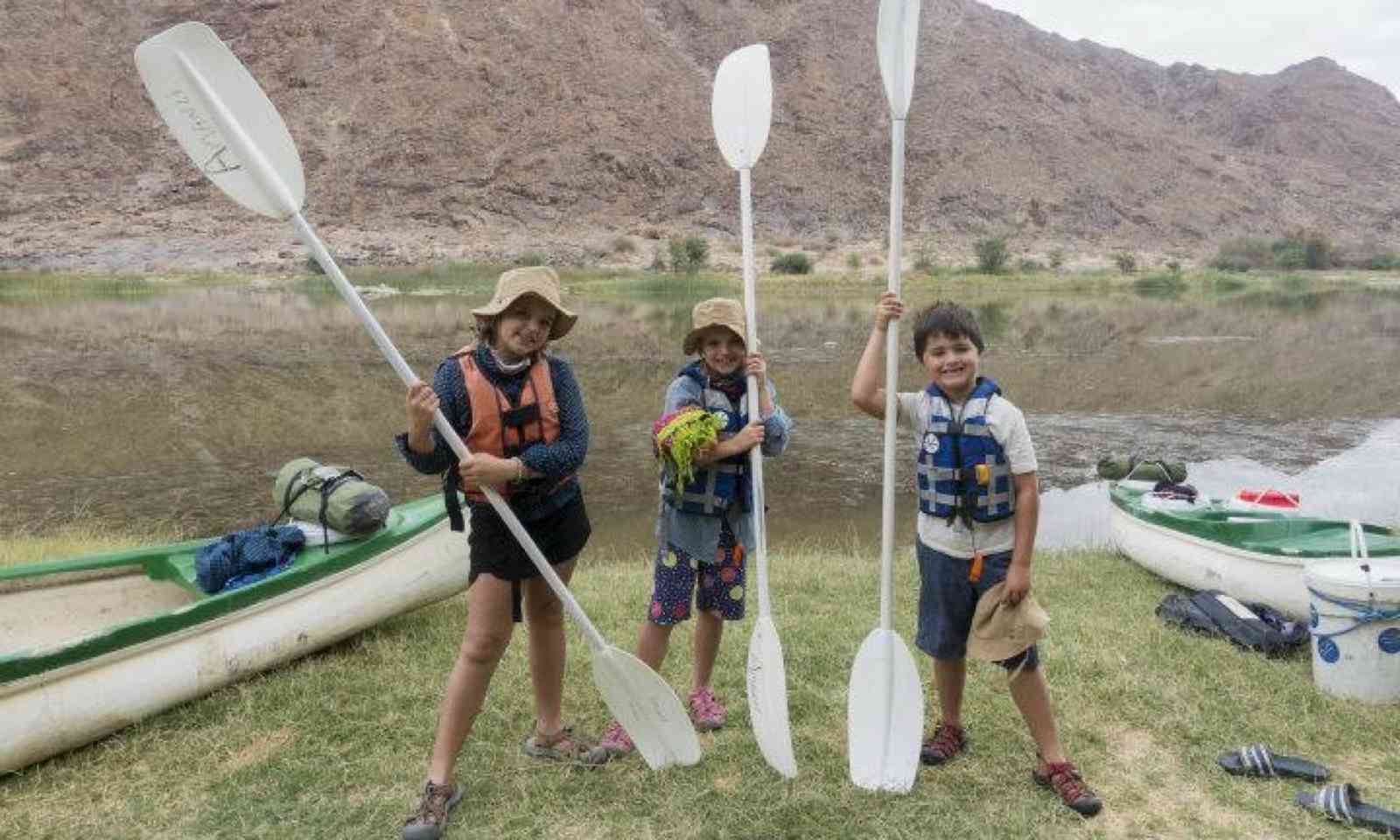 The afternoon saw us paddling through ancient volcanic lava flows, still buzzing after conquering Sjambok.  We made it through the Magnetic Rock rapids without breaking a sweat – no mean feat as it’s a rapid that sucks you right in and is known for snapping canoes in half.

Our third and final camp is perched below an abandoned diamond mine. The site was littered with machinery, some of it looking like it wouldn't take much to get it working again. Mario says that there are plans to start the mine again prompting the kids to go in search of their own diamonds. Edwina and I spent the hour or so before dinner examining the rocks brought to us by the kids.

"Urrr, not sure,” I said to every rock and crystal. “I don't think it's a diamond but who knows?". The kids kept them anyway, convinced that they had found a precious jewel.

The next day we woke up early for our last day. There were no more big rapids, just plenty of flat water, and we eventually reached the end point of our journey on the banks of the largest grape farm in Namibia.

After a short ride back to camp in the back of a pickup truck, we pitch up for the night, enjoy a hot shower and reflect on our experience over the last few days. The scenery, the remoteness, the campfires, the fantastic guides who were brilliant at interacting with the kids, the thrill of conquering the rapids­ – these things would stay with us forever.  Most of all, we were incredibly proud of the kids and how they handled the whole experience at such young ages.

I am sure that is something that will hold them in good stead for the rest of their lives.