A British break in... Unseen London

A winner at the Wanderlust World Guide Awards, Unseen Tours helps the homeless find a fresh start as tour guides. Gareth Clark joins a tour and discovers another side of London…

Pete knows Brick Lane like no one else. Until a few months ago, he lived in a shelter here. When it shut down, he landed his own place, but it was while watching the same old guides stride up and down the area, scouring the Banksys (“He’s not in my top five,” grinned Pete) and its former Victorian rookeries (“The Ripper didn’t only strike in Whitechapel!”), that an idea hit him: why not write his own tour?

He found a saviour in Unseen Tours, a not-for-profit enterprise that helps the vulnerably housed and homeless become guides. It’s not ‘poverty tourism’ or voyeurism; it’s about telling the story of an area from a perspective you just wouldn’t ordinarily hear.

Pete prefaces his Brick Lane tours with a warning. “I’ve got opinions,” he told me in his deep Mancunian drawl, “and you might not agree with them.” But it’s hard not to be drawn into his world. He speaks quickly and honestly; there’s no soap box, just insight, lessons learned… and murders.

We began at the site where a young Bangladeshi, Altab Ali, was killed in 1978 by far-right thugs. Pete painted a picture of the rage in the East End at the time, as The Clash stoked the ire of anti-racist protestors at the adjacent park now named after Ali. This was the same area where fascist leader Oswald Mosely’s blackshirts had tried to march 40 years earlier, and as with a lot of the tour, Pete’s message is one of social change.

Brick Lane is an area of constant upheaval. Its iconic mosque was once a synagogue, and before that a church built by French Huguenots fleeing persecution. Each community came here for a new life, then moved on. Even its street art isn’t meant to last – its power comes from renewal.

Things get lost in the churn, but that’s where Pete comes in. At times he’s outraged (at laws that leave some to die on the streets), at others moved. All the while he gives a face to what came before in his hymn to the overlooked, from Ripper victims to workers.

London is full of hidden stories. Unseen Tours’ walking histories are a day out like no other, but in a city of caves, tunnels and secrets, there's always plenty more to discover. 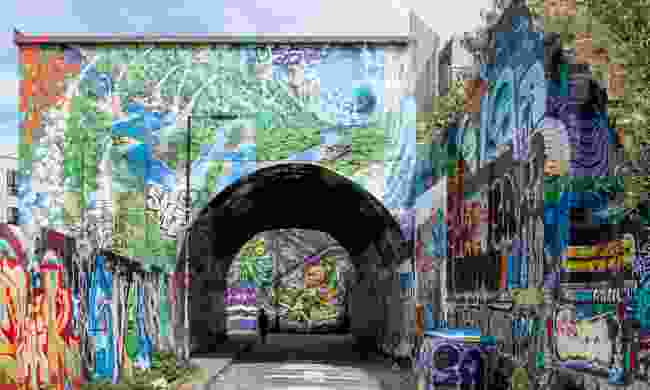 A bridge near Brick Lane (Dreamstime)

“When looking around at the street art of Brick Lane, don’t look just at eye level. Look down corners and alleyways, even on the backs of lamp posts – otherwise you might miss the most interesting stuff.” 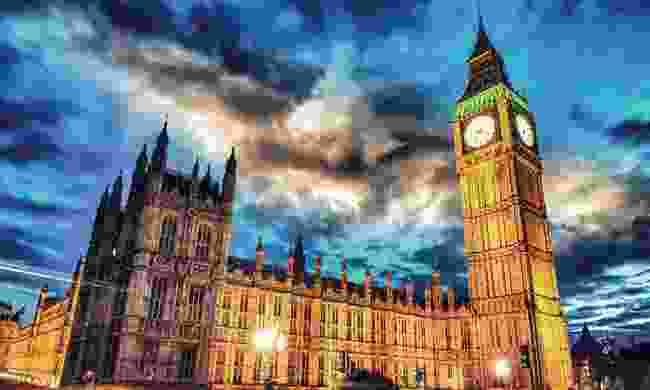 Moonlit Westminster – a site few others get to see (Shutterstock)

First head to North London and the serenity of Highgate Cemetery. You can walk its east side freely (Karl Marx’s tomb is here), but the west is by tour only – its catacombs and obelisks reveal the Victorians’ odd fixation with Egypt and dying like a pharoah.

Next, make your way to Aldgate tube for Unseen Tours’ Brick Lane walk. From the National Front to street art, integration and Jack the Ripper, tour guide Pete pours out two hours of insight and social history in a paean to the forgotten of London.

Beneath Whitehall lie the thrilling Churchill War Rooms, where hundreds once lived and worked in secret during the Blitz. Walk its narrow halls and discover how staff bore bombs, rats and the PM’s foul moods – Churchill loathed noise; even the typewriters had to be ‘silent’. It’s a fascinating insight into a long-hidden history.

Finish in a kayak on the Thames on an atmospheric Big Ben by Night tour, savouring a moonlit angle on the capital few others see. 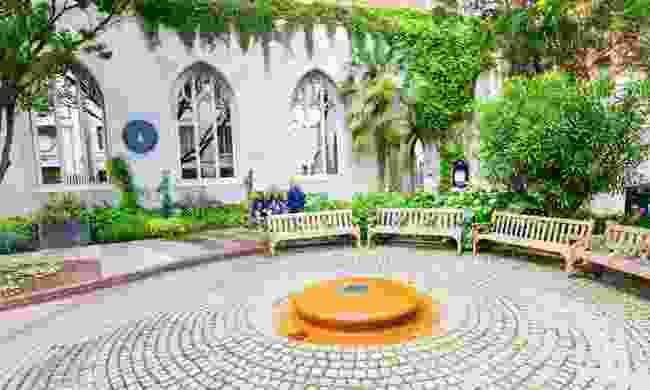 Don waders to stalk the mud of Deptford’s starkly beautiful tidal creek. Tours run once a month on Sundays and explore a little-seen stretch of wild that is fringed by the ghosts of old tidal mills, beached hulks and birdlife.

Head next to Spitalfields for the bizarre sight of Dennis Severs’ House. Each room here has been meticulously recreated in the style of a different era by its former owner. It’s a testament to obsession and detail – even the chamber pot is full! And afterwards, it’s not far to walk to the old bombed-out ruins of St Dunstan-in-the-East, the site of London’s best secret garden.

Finish at The Vaults – a maze of tunnels that spills into a little-known theatre below Waterloo station. Its Hidden Jazz Club nights shine in an eclectic programme that rarely disappoints. 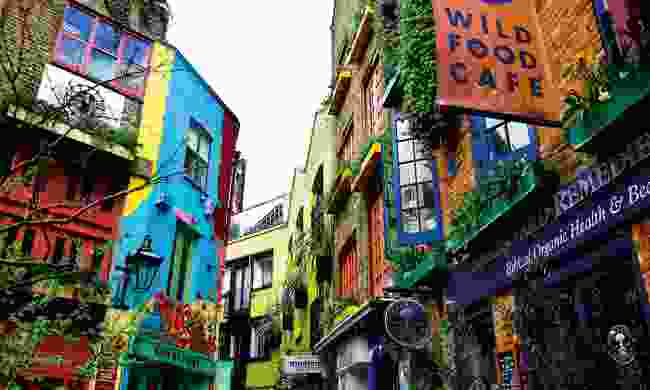 A sneaky tipple: In Earl’s Court, Evans & Peel Detective Agency takes its speakeasy shtick seriously – to gain entry, book a ‘case’ via the website, then buzz to be escorted in via a door/ bookcase. Meanwhile, the Discount Suit Company in Spitalfields looks like a tailors from the outside (and it once was), but the cocktails now offered inside its candlelit bar are bliss. 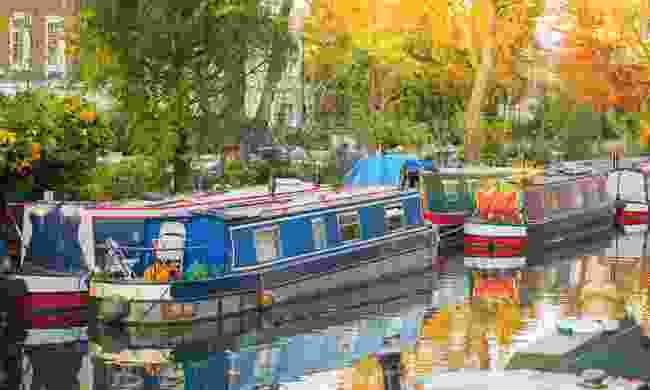 Beside Paddington station lies the hidden canal area of Little Venice, which not only makes for a scenic stroll but has plenty of enticing brunch spots – including the Waterside café, set on a moored narrowboat.

Top 3 tours under the capital... 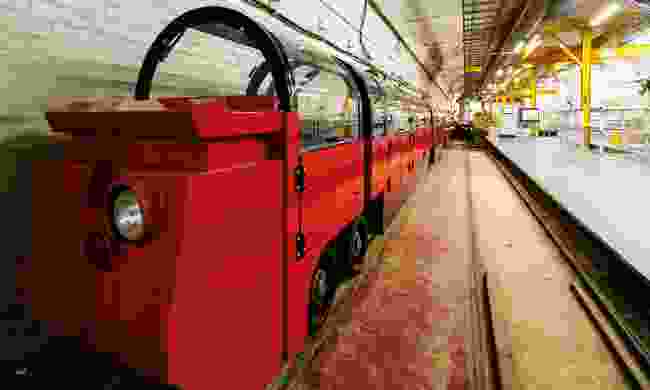 The Mail Rail once ferried 4 million letters a day below London. But after 75 years it closed, only to be resurrected as a ride in 2017. Whizz through its tunnels in a tiny train as its history is told on film projected across the walls.

Hidden London tours have led visitors around abandoned tube stops, through lost tunnels, and even into Churchill's bomb-proof secret station. The settings change regularly – check the website for the latest ones.

The hand-dug tunnels of Chislehurst Caves stretch 35km. Tours explore a fraction of that, but let you discover its past as a medieval chalk mine, a shelter for 15,000 people during the Blitz, and a cult music venue (Bowie and Hendrix played here).