Whether you're looking for culture, history, adventure or wildlife, you can discover it all from home on these virtual European tours...

Europe offers something for every kind of traveller. Whether you want to explore the grounds of a castle, learn about the history of Pompeii, watch birdlife in action or walk across a mountain range, there's an experience for you.

For now, you'll have to settle for seeing Europe from your sofa. With plenty of virtual experiences on offer, it should be a breeze. Simply search based on your interests, or keep scrolling for the full guide... 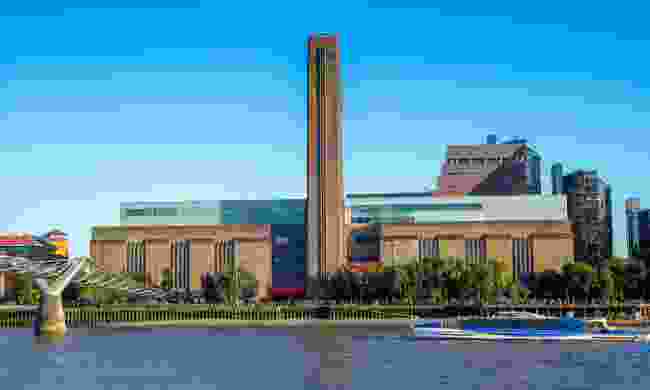 Featuring iconic images of Marilyn Monroe and Campbell's soup cans, Andy Warhol's colourful pop art is among some of the most recognisable in the world.

Learn more about the man behind the work on this insightful virtual tour of his exhibition in London's Tate Modern. 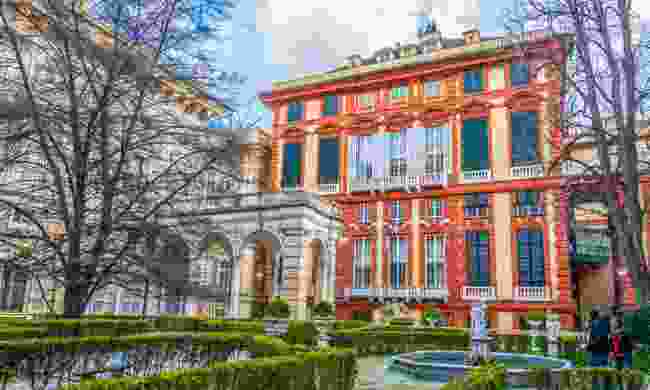 Palazzo Rosso, Palazzo Bianco and Palazzo Tursi are all separate and magnificent 16th-century palaces, but it is what they all share that's most of interest.

Together, the three neighbouring palaces make up the Strada Nuova Museums, which houses an extensive and impressive collection of ancient art.

Take this virtual tour to take a closer look at the portraits hanging inside. 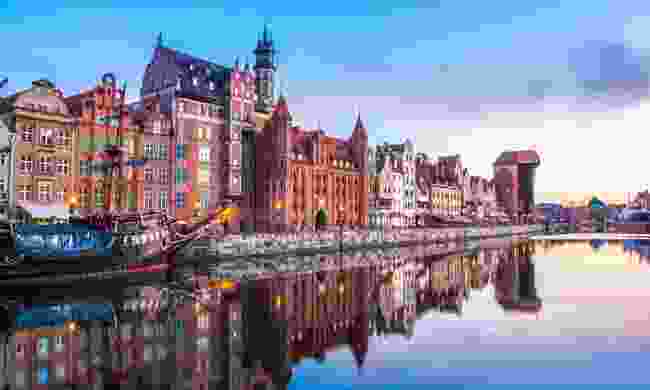 With a picturesque waterfront, cobbled streets in the Old Town, spindly spires topping colourful buildings and rich, maritime history - Gdańsk is the type of city where you can't take two steps without wanting to stop and take a photo.

Get a taste of vibrant Gdańsk with this virtual walking tour, which allows you to peruse the main sites and soak up the bustling atmosphere, without having to leave your house.

4. Explore the Vatican in Vatican City 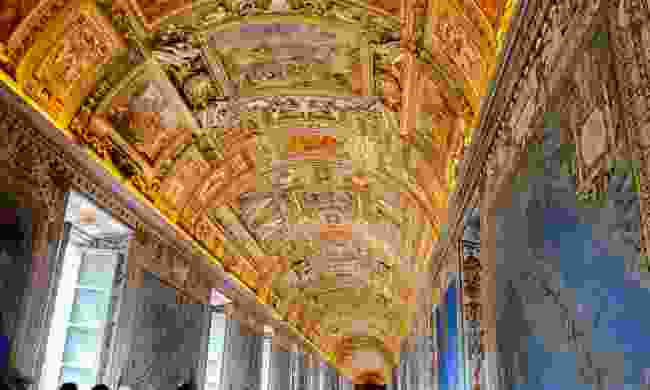 There's nothing like seeing the Sistine Chapel in real life.

Hearing the echo of your footsteps in the otherwise empty hall, and tilting your head back to scour at every detail of Michelangelo's masterpieces, painted on the ceiling.

But nothing gets closer to the real thing than this 360-degree virtual tour. You'll be able to marvel the paintings for as long as you desire, without getting neck ache - the ability to zoom in and out means you can appreciate the full scale of art, narrowing in on particular details.

This isn't the only part of the Vatican you're able to see virtually. The tour also includes online interactive visits to the Pio Clementino Museum, Chiaramonti Museum and the Niccoline Chapel, among others.

5. Step inside the Palace of Versailles, France 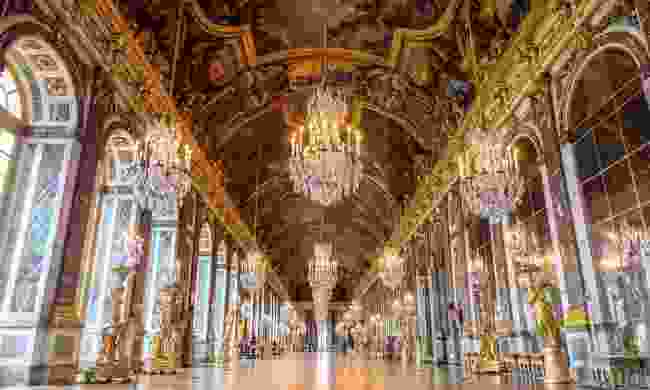 With 2,300 rooms spread over 63,154 sq m, the 17th century Palace of Versailles has rightly been a World Heritage Site for more than 30 years.

It's around half an hour away from Paris by car, but now, you can see the glittering royal home from the comfort of your living room.

A partnership with Google means there are now a selection of virtual tours that allow you to see the paintings, engravings and sculptures up close - and learn about their significance.

There are many virtual exhibitions to choose from. The Louis XIV/Nicolas Fouquet: A Certain History of Taste tour teaches you what these two powerful men had in common in their artistic choices, while the Louis XIV: The Construction of a Political Image tour focusses on the many portraits of the past King, explaining how he used art to maintain his influence.

Explore exhibitions covering science, fashion, royalty and the history of the palace itself, too.

Like these? Explore more virtual tours of the world's best museums

1. Get a taste of France with this onion soup 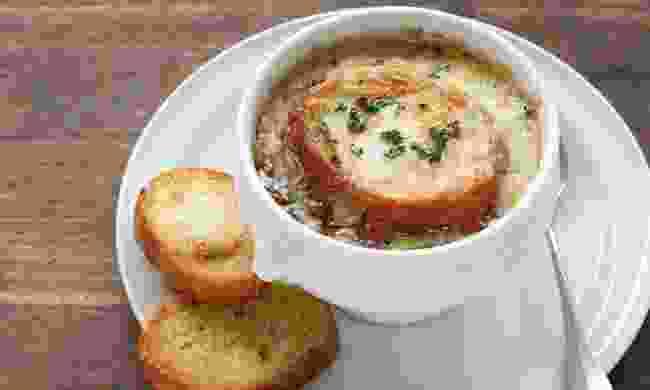 France is undoubtedly one of the world's great culinary capitals. So what better way to get a sense of travel here than to taste the country's food?

Onion soup is a popular dish in France, and makes a hearty lunch or starter. Follow this recipe and have your own French dining experience at home. 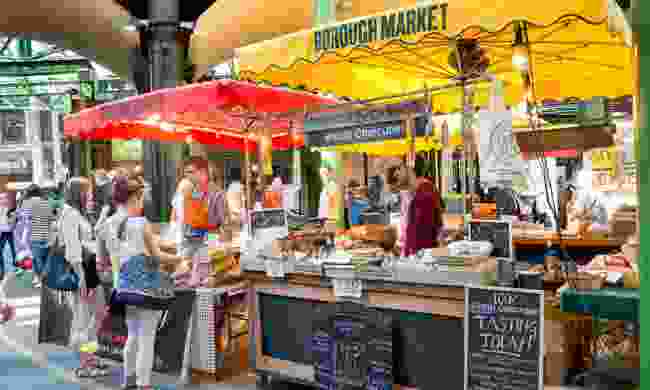 Discover the delights of Borough Market from home (Shutterstock)

The popular market may be closed for now due to coronavirus, but the bustle of this community is still very much in action. 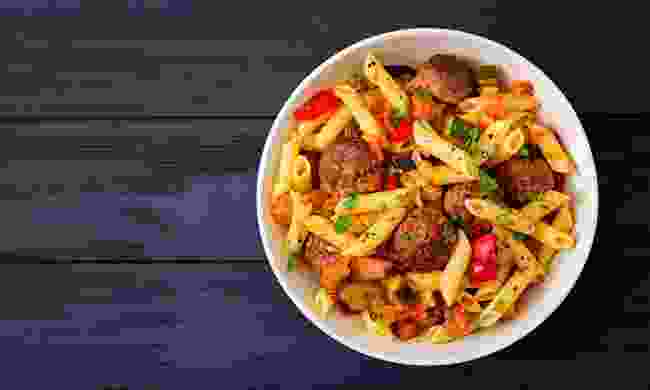 Join Grandma Nerina in her kitchen in rural Italy to learn the secrets of Italian cooking and create your own authentic and fresh pasta dish.

Cook alongside Nerina, or simply watch her at work, all while listening to her fascinating stories, giving you an insight into Italian culture. You can even take a virtual walking tour around the Medieval village where Nerina lives.

4. Try a taste of tradition in Germany 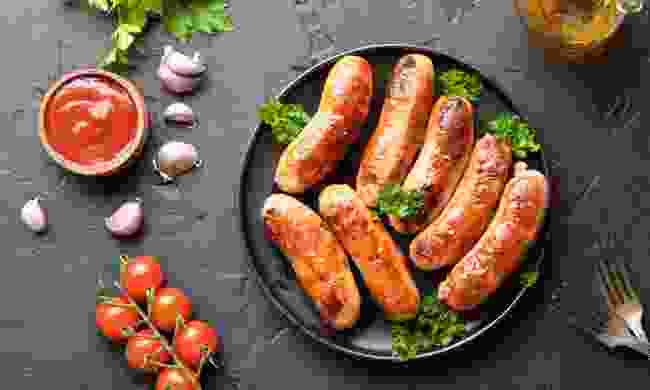 Sausage, stews and comforting pies - German cuisine is hearty, filling and well-loved the world over. Of course, its best tried in the country itself, though these authentic recipes are guaranteed to take you there with just one bite.

The 600 year-old Thüringer bratwurst recipe, Aachener printen (ginger bread) and Bavarian bread dumplings are just a few of our favourites. They're all available to download for free, too. 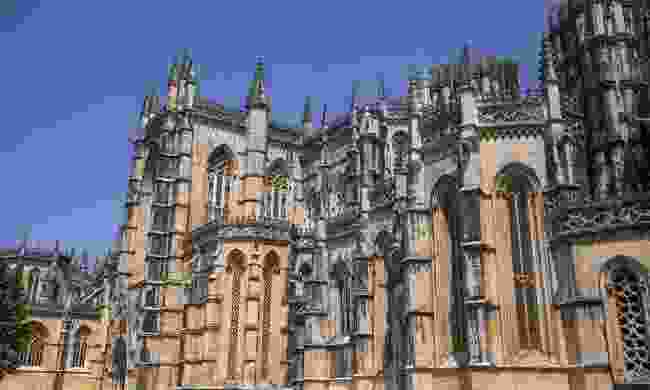 Head back in time to 1385 on this immersive and historic tour of Portugal's Batalha Monastery. You'll learn all about Portugal's victory in the Battle of Aljubarrota, which took place close by.

You'll also be able to admire the monastery's incredible architecture, as well as the sculptures that stand inside. 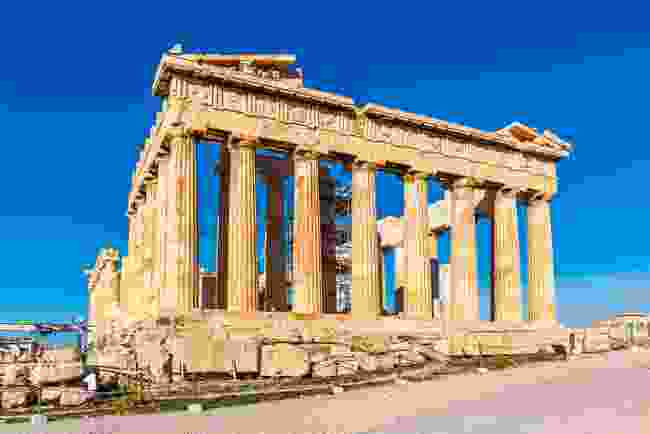 Think of the Greek capital and this large, crumbling, colonnaded building standing stoically on the cliffs likely comes to mind. It may be over 2,400 years old, but this ancient site still denotes power and importance.

Greece may be closed off to tourists for the time being, but one of its most iconic archaeological wonders can still be explored.

With a video showing Acropolis from above and the view from the ground, paired with detailed information about its history, this virtual tour is an interactive and informative way to experience Greece's symbol of democracy. 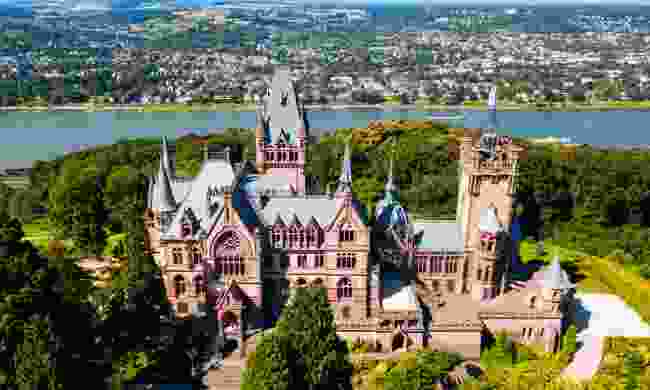 You can tell the Drachenburg Castle is steeped in history just from one look. The castle sits on a hilltop and is crowned by fairy tale-esque towers, offering picture-perfect views over the Rhine River

This virtual tour of Drachenburg Castle gets you onto street view, so you can 'walk' the grounds at your leisure.

4. Step inside the Tower of London 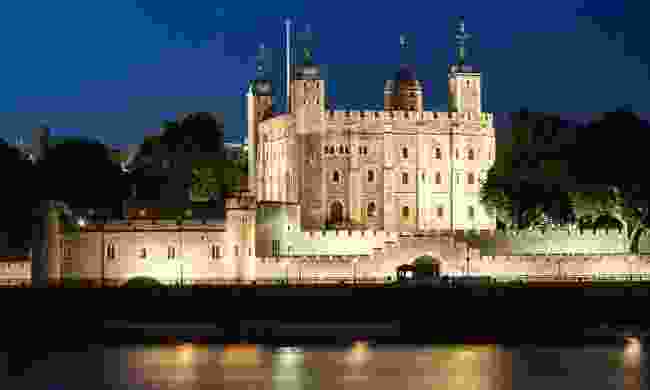 The Tower of London (Shutterstock)

The Tower of London is in the heart of England's capital. The stony, square-shaped fort remains is a popular destination with people from all over the world.

Not only does the building house the crown jewels, but it's also thousands of years old, and with time comes many fascinating (often gory) stories of those who spent their final days imprisoned inside.

This virtual tour pairs 360-degree photos and street walking options with detailed accounts of the tower's past.

5. Soak up the history of Pompeii, Italy 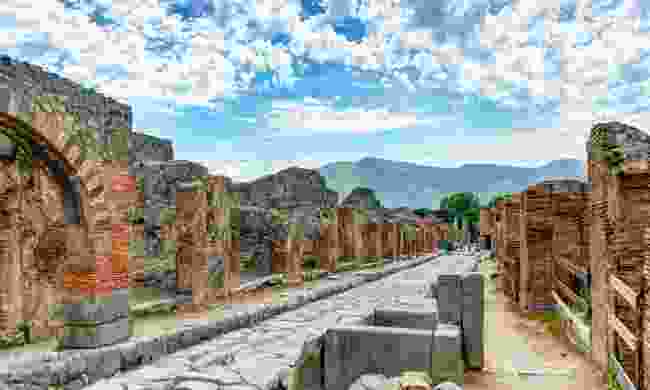 This ancient city in Italy is famously preserved in ash, following a deadly volcano eruption hundreds of years ago.

This virtual tour shows you what the site looks like now, while also filling you in on what life would have been like before the tragic volcano eruption that froze Pompeii in time took place.

5 incredible virtual experiences for getting closer to nature

1. Go for a walk in Denmark's countryside 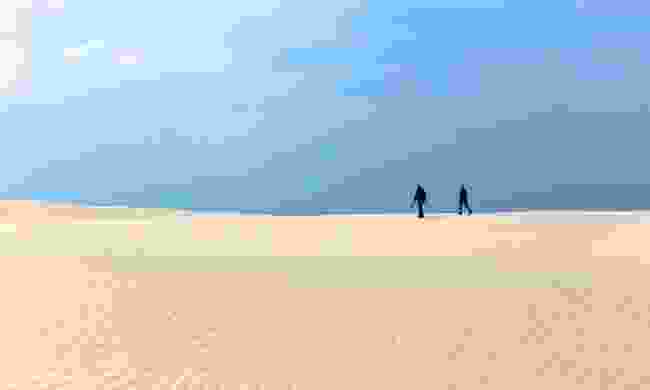 Visit Denmark has put together a list of seven nature-filled walks that you can experience from your living room.

Whether you want to experience a moving sand dune or spot birds along Horsens Fjords, these virtual walks will make you feel closer to nature.

2. Admire tulips in the Netherlands 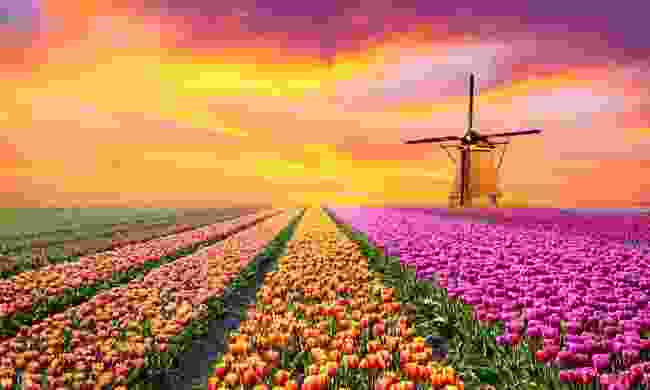 Neat rows of brightly coloured tulips are sure to lighten up even the bleakest of days. That's just one reason why the Netherlands remains popular with travellers across the globe.

This virtual experience allows you to see the flowers from every angle, so you can truly appreciate the size, beauty and variation of colour among the tulip fields. 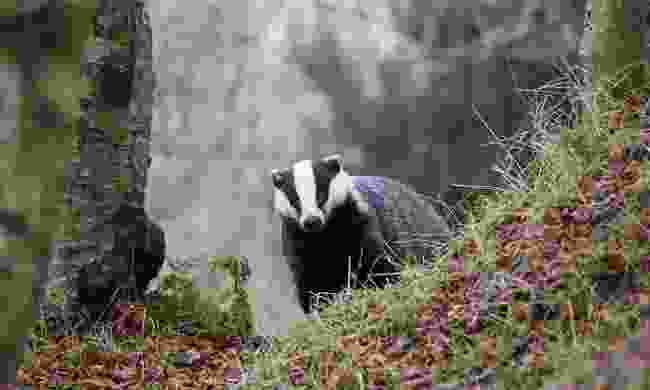 Keep a careful eye on this live webcam, and you'll likely see a badger or two walking past.

The European badger, with its burglar-striped faces, is extremely rare and hard to spot in the wild. However, the staff of the Badger Bar & Restaurant noticed a family living nearby and left food out for them, upping the chance of seeing them.

Since the COVID-19 lockdown, the Cumbria Wildlife Trust has been keeping an eye on these shy creatures. For your best chance of a sighting, watch the live feed at dusk on Tuesdays and Thursdays. 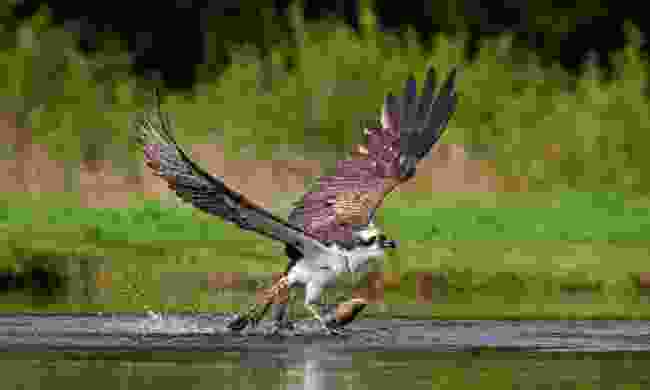 These huge birds of prey have almost a hypnotic affect on those who spot them majestically gliding through the sky. Their wingspans can be as long as 180cm.

Get a closer look by watching this live cam in Estonia. The incredible footage allows you to see straight inside an osprey nest, where you can admire the youngster and watch its mother come and go with food.

5. See puffins up close in Alderney 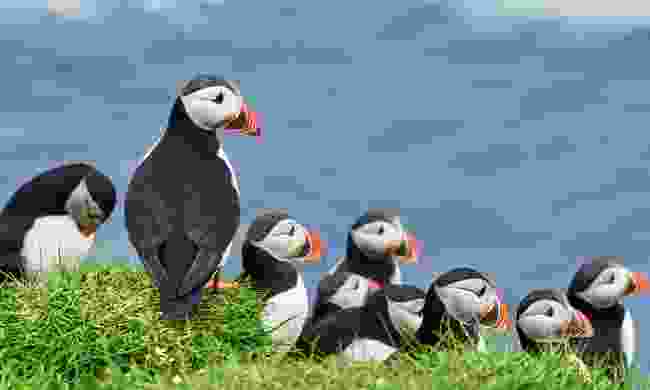 Did you know that puffins sometimes fight with rabbits? If you don't believe us, then take a look for yourself.

Alderney, one of the Channel Islands, has set up three cams to keep an eye on the comings and goings of the popular puffins. Whether you want to enjoy a rare up-close view or see the whole colony from a distance, the webcams give you a real insight into these beautiful birds' lives.

Our guide to the best virtual tours of Africa