Rugby fans heading to Japan for the World Cup will be pleased to know that the country has a long history of delicious, bite-sized post-match snacks. Simply wander down an alley and follow your nose! 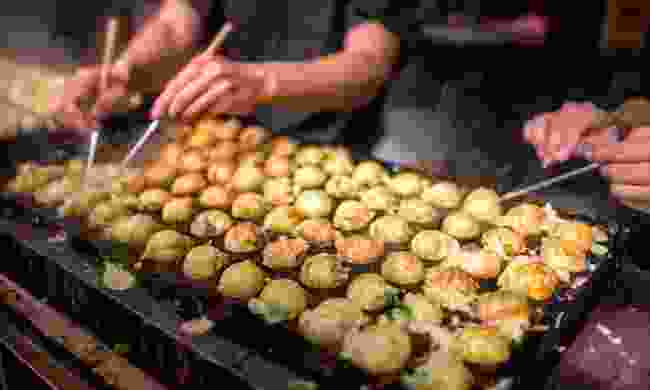 Takoyaki are bite-sized balls of savoury goodness, made from a wheat-based batter and cooked in special moulded pans from both streets stalls and tiny hole-in-the-wall restaurants.

The balls are filled with tiny pieces of octopus, tempura, green onions, and pickled ginger, and fried until they are a delightful golden colour. Watching the cook skilfully flip them with chopsticks is a mesmerising sight, and almost as enjoyable as eating them. 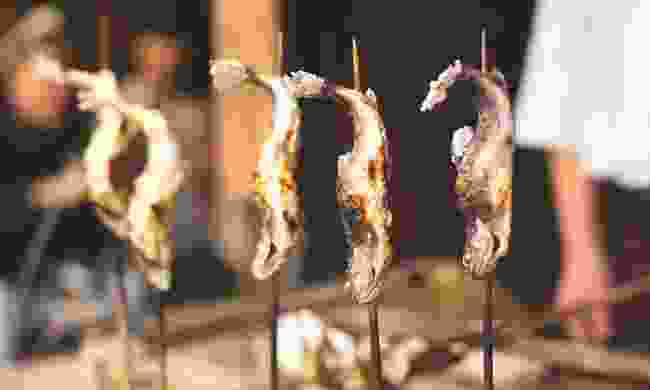 Salt-grilled fish on a stick (Shutterstock)

It may look like a simple ‘fish-on-a-stick’, but there’s more to shioyaki than meets the eye. The fish has been ‘salt-grilled’, a particular Japanese technique that sees the fish, usually heavily-salted mackerel, left to marinade overnight and then grilled over flames the next morning.

Be warned: shioyaki is super salty. But like similarly salty pork scratchings, its the perfect accompaniment to an ice cold jug of beer. 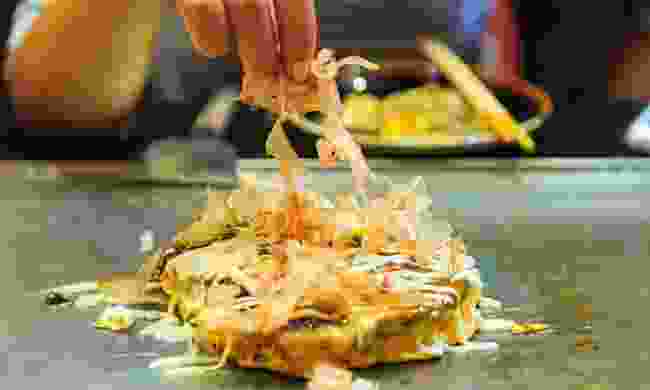 A staple across Japan, okonomiyaki is a savoury Japanese pancake made from whatever's close to hand. The batter is commonly prepared with eggs, meat or seafood, vegetables and cheeses, but ingredients vary widely.

The batter is poured on a griddle, flipped and cooked on both sides. Then topped with a special sauce, mayonnaise, bonito flakes, seaweed flakes, and pickled ginger. In some restaurants you get to make your own, mixing the ingredients in a bowl and cooking it on a small grill in front of you. 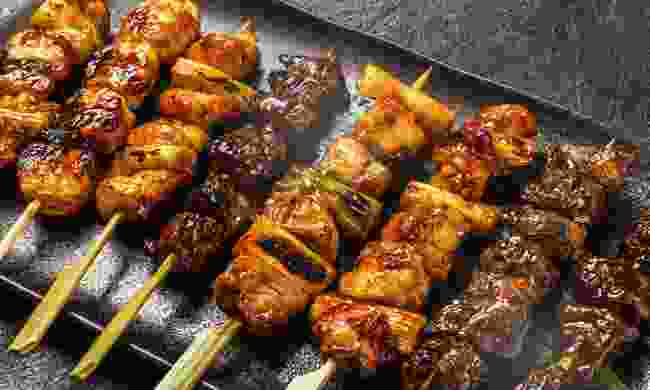 Whether you’re coming home from a big night or a big match, you can always count on grilled meat on a stick to sort you out. Yakitori is the Japanese version, and while it is small and dainty, it does the trick.

Yakitori is grilled over a charcoal fire. Chicken yakitori is a firm favourite, but pork or beef is popular too. Some grills offer more exotic options like a whole sparrow, so be sure to ask before tucking in. 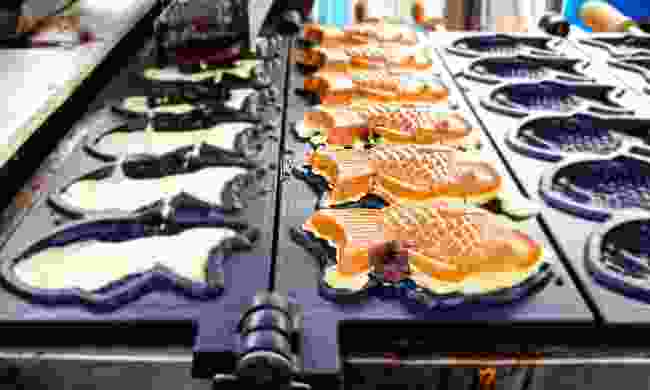 Here’s one for those with a sweet tooth – a fish-shaped waffle filled with red bean paste, custard, or chocolate.

Made in specially manufactured moulds, taiyaki is typically Japanese, designed to look as good as they taste. Warm, gooey and very, very satisfying. 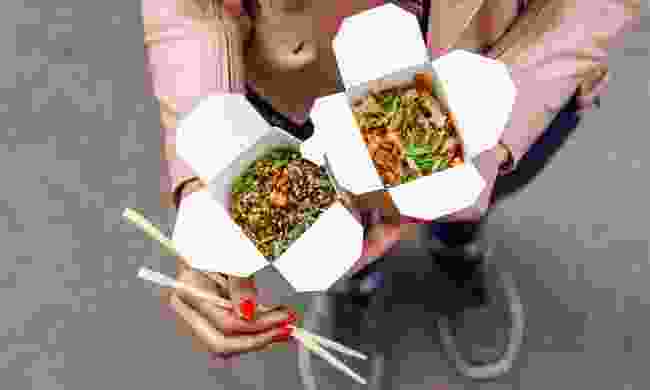 Sometimes nothing hits the spot like a bowl of tasty wok-fried noodles and in Japan, that is yakisoba.

Wheat noodles are stir-fried with pork and vegetables, seasoned with a special tangy sauce and topped with the usual suspects of dish flakes, ginger and mayo.

Sometimes they’ll be topped with an egg. Some vendors offer them served in a hot dog bun. They're called yakisoba pans. 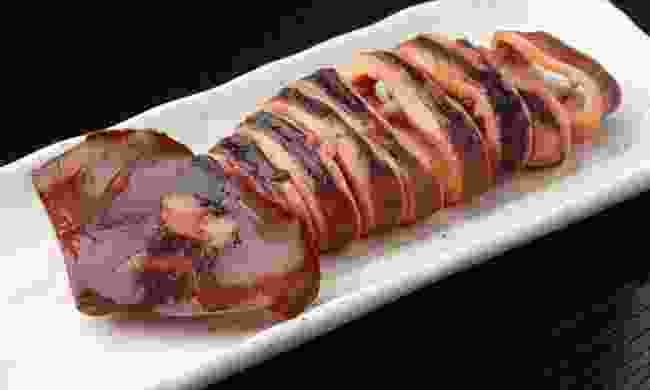 In Japan, nothing is quite as pleasing as the chewy texture of ikayaki, grilled squid on a stick.

Served without tentacles, it is slathered in a sweet soy sauce and grilled over charcoal. Cooks often score aesthetic lines into the flesh, making it as amazing to look at as eat. 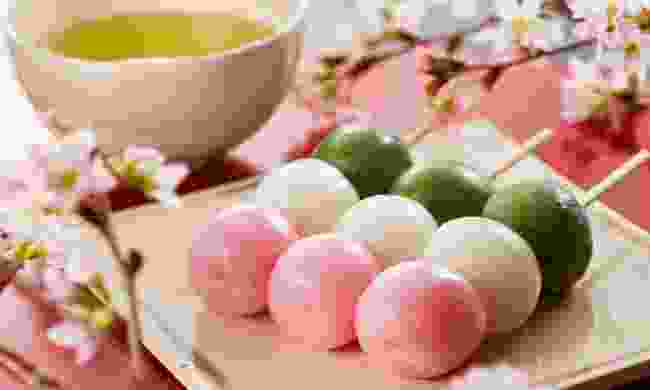 Dango is a sweet Japanese dumpling made from mochiko, a glutinous rice flour. They are sweet and moorish. Luckily, you get three or five per stick. Dango is eaten year-round, with different varieties eaten in different seasons.

Cherry blossom season, for example, sees the appearance of hanami dango, named after the blossoms and coloured pink, white, and green to represent the flowers. 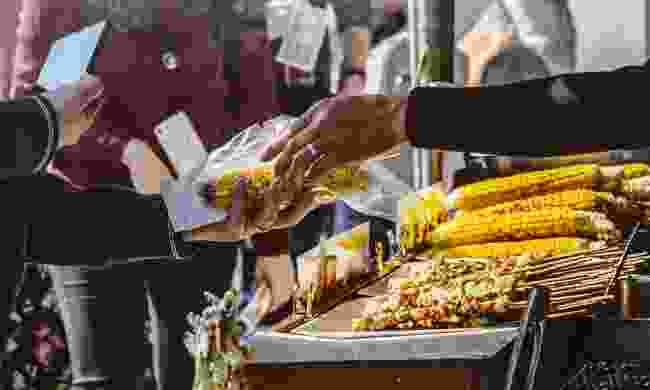 Simple and satisfying, Yaki Tomorokoshi is the Japanese version of corn on the cob.

Grilled over an open flame, the corn is slathered in miso, soy sauce and butter, then served on a stick. It’s guaranteed to be the most delicious corn you have ever tasted. 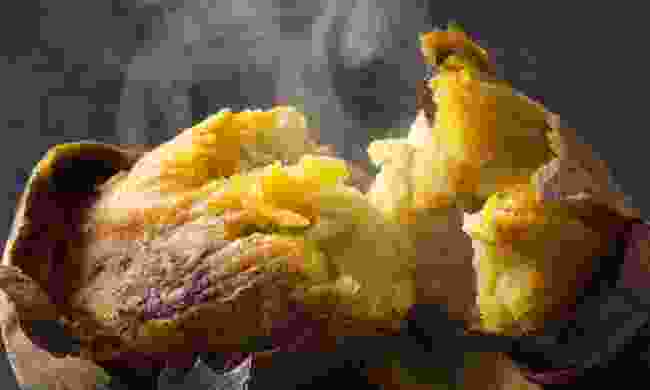 Nothing warms you up on a chilly autumn day than yaki imo, a distinctly simple Japanese treat of a baked sweet potato, served in a brown paper bag.

Baked over a wood fire, the skin is pleasingly chewing, the inside soft and fluffy and the taste a little like caramel. Made from Satsuma-imo sweet potatoes, only found in Japan, it is a uniquely comforting treat, especially if your team didn’t do as well as you had hoped.

More Japanese food you must try:

A culinary tour of Japan

How to survive as a vegetarian in Japan