As the United Arab Emirates prepares to celebrate its 50th anniversary in December, we explore its roots in this ancient oasis city

The modern state of the United Arab Emirates (UAE) may have been founded as recently as 1971, when its seven emirates were unified, but evidence from excavations in the city of Al Ain reveals a history dating back many millennia.

An inland city in the emirate of Abu Dhabi, Al Ain sits on the border with Oman, near the northern fringes of the Rub’ al Khali – the ‘Empty Quarter’. The Arabic name Al Ain translates as ‘The Spring’ – a reference to the abundant water that enabled the city to take root and thrive in this arid region, as a succession of civilisations tapped into this vital natural resource. Dubbed the ‘Garden City,’ Al Ain boasts an abundance of parks, leafy boulevards and springs – unique in a region that’s otherwise as withered as a forgotten houseplant.

More than 200 springs feed the 147,000 date palms and mango, fig and sidr trees in Al Ain Oasis, which sprawls across an area the size of London’s Heathrow Airport. That oasis is one of several sites recognised by UNESCO for its sophisticated aflaj irrigation system: water drawn from underground sources – wells and aquifers – is transported via aqueducts to the oasis, where it is dispersed via a network of channels. The oasis is a working plantation, with mud-wall boundaries, but visitors can explore the shady paths that snake through the site on foot, by bike or on horseback.

Al Ain’s abundant water drew tribes to the area over thousands of years. Explore its long history of habitation at Hili Archaeological Park, a complex of Bronze Age sites dating back to 3000BC, with its stone-built, 4,000-yearold Grand Tomb, Iron Age irrigation system and dwellings. Evidence of ancient settlements has also been found at Bidaa Bint Saud, 15km north of the city; both locations are recognised as elements of Al Ain’s UNESCO World Heritage site. 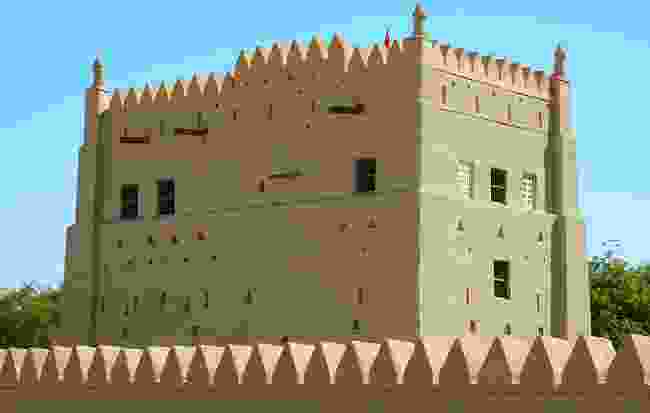 Much more recently, in the 1890s, Al Jahili Fort was built by order of Sheikh Zayed bin Khalifa Al Nahyan to protect Al Ain’s water source and the farmers working in the oasis. Recently restored, it now houses a cultural centre with a permanent exhibition about the British explorer Sir Wilfred Thesiger, who traversed the Empty Quarter in the 1940s.

That fort-builder’s grandson, Sheikh Zayed bin Sultan Al Nahyan, is credited as the UAE’s founding father. It’s widely believed that he was born in the ‘Green City’, which no doubt influenced his vision to transform the nation’s arid landscape into a garden by planting millions of trees.

You can learn more about the younger sheikh at his erstwhile residence. Al Ain Palace Museum, a fort built in 1937 in Bedouin style using clay, adobe and palm trees, was his home until 1966, when he moved to the capital Abu Dhabi. Visitors can explore the selection of rooms and courtyards that are open to the public, as well as exhibitions depicting nomadic Bedouin life before the discovery of oil in 1958 transformed the region.

Absorb more insights about the city at Al Ain National Museum, charting its history from the Stone Age to the UAE’s foundation. As well as 4,000-year-old jewellery found in local tombs, the archaeology section features Iron Age pottery and bronze weapons discovered in what’s now Hili Archaeological Park and around the UAE’s second tallest mountain, 1,249m Jebel Hafeet. The ethnography gallery displays musical instruments and low-level seating in a majlis (traditional gathering place). You’ll also see gifts presented by other nations, including a rock retrieved during NASA’s Apollo 17 moon landing. The estate is also home to the mud-brick Sultan Fort, dating from 1910.

Thirsty? Find a patch of shade and sip from your reusable water bottle – though you might be tempted, just this once, to buy a bottle of Al Ain Water for its logo, depicting the distinctive concentric round tower at Al Jahili Fort.

Getting there: Fly direct from London Heathrow to Abu Dhabi with Etihad or to Dubai with Emirates.

When to go: October to April, when temperatures remain below 40°C.

Accommodation: Al Ain Rotana is a five-star resort opposite Al Jahili Fort (rotana.com), while Green Mubazzarah Chalets are close to natural hot springs and Mubazzarah Dam at the foot of Jebel Hafeet (danathotels.com). You can also camp in basic or Bedouin tents or glamp in luxury domes nearby (jebelhafitdesertpark.backhotelite.com).