7 of the best things to do in Laos

Laos is often overlooked by visitors to its neighbouring countries. But with gilded temples, stunning scenery and one of Asia's most epic waterfalls, there’s every reason to visit Asia's best kept secret

1: Lose yourself in Luang Prabang’s temples 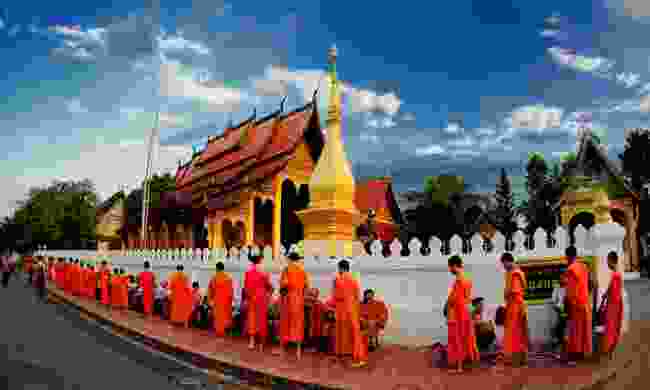 Cobbled streets, saffron-robed monks, mile-long markets, and a riverfront with stunning sunsets backed by magnificent karst scenery. It’s hard not to feel peaceful in spiritual Luang Prabang. With 33 wats in this sleepy city, you could spend days just exploring the temples alone.

Rise at 5am to watch tak bat, where Buddhist monks walk the streets for the morning alms giving. Climb Mount Phu Si for 360-degree views over Luang Prabang. Walk around the back of the mountain to find giant Buddhas etched into the cliffs. Peep at Wat Mai Suwannaphumaham before walking towards Sakkarin road marvelling at the many temples lining the street every 100 metres or so. Soon you’ll reach the sacred spot where the Mekong and Nam Khan rivers meet. Here you’ll find Wat Xieng Thong, the city’s most awe-inspiring temple with its layered roof just shy of touching the floor and a mosaic-encrusted back wall displaying the tree of life – and that’s before you’ve even set eyes on the rare reclining Luang Prabang-style Buddha inside.

For a bombardment of colour, noise and the smell of coconut doughnuts cooking on the streets, stroll through the night market selling food, clothes, handicrafts and jewellery made from discarded ammunition shells in the Vietnamese War. Afterwards, head to the riverside to find bars hanging over the Mekong under fiery sunsets, or take a boat to the other side of the river for an alternative view of the city.

Luang Prabang’s food is some of the best in South-East Asia, with more and more top chefs moving to the area. For a taste of tradition, opt for a Luang Prabang salad, which packs a punch of garlic and is topped with sliced egg.

2: Have an adventure in Vang Vieng 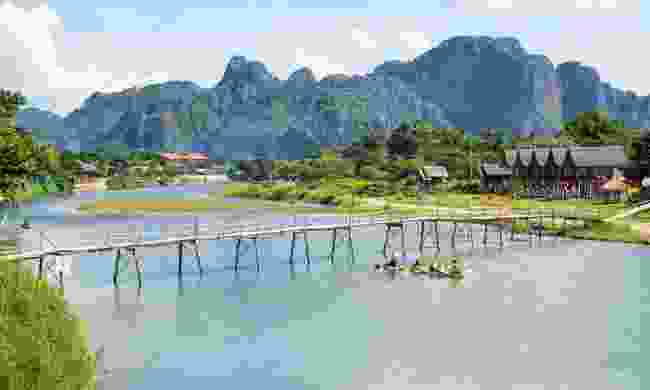 Hidden among green-carpeted karsts and pockets of jungle, ruggedly beautiful Vang Vieng is no longer the party town that gave it its bad reputation, but a lot of fun can still be had here. For full-on adventure, kayak down the Nam Song at white-water rafting speeds. Pull up at the river’s edge and swap paddles for a harness for a zipline experience taking you above the tree-tops, finishing with a steep descent that makes you certain you’ll plunge into the river below.

If you prefer being underground to flying through the air, explore Vang Vieng’s best caves. Tham Xang (Elephant Cave) is home to ancient Buddha statues, a Buddha footprint and an elephant-shaped stalactite. Tham Hoi and Tham Loup also house Buddha statues along with the names of 100 people who hid in the cave during the wars. To explore Tham Nam (Water Cave), jump in a rubber ring and tube through the dark, water-filled cave with only a headtorch and rope for guidance.

Continue the adventure at the Blue Lagoon on the slides, swings and jumping platforms erected around the sparkling turquoise waters. If you need a break, Vang Vieng offers many relaxing locations, including riverside hammocks where you can watch the world go by with a Beer Lao in hand. 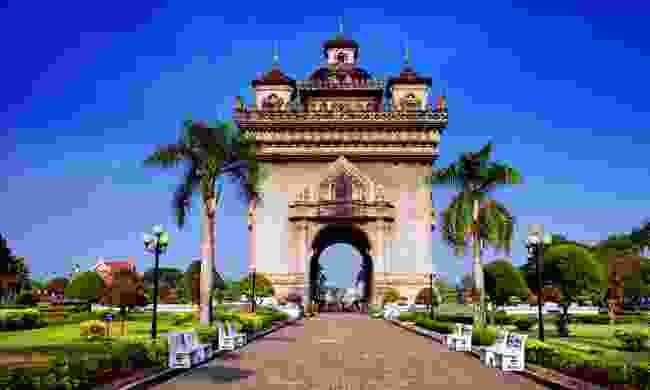 Formerly a French colony, charming Vientiane is South-East Asia’s answer to Paris. Visit Laos’ own Arc de Triomphe (Patuxai), built with concrete given to them by the USA for a new airport runway. Wander up the commercial district for a view of 'the vertical runway' before climbing to the top for stunning views over Vientiane. Descend the monument and continue to Pha That Luang. Said to be the most important national monument in Laos, this gold-leafed temple is believed to have a piece of Buddha’s breastbone encased in the stupa.

For an insight into the tragic history, visit the COPE centre. More bombs were dropped on Laos per capita during the Vietnam War than any other country in history. Many bombs failed to detonate, and still injure Laotians today, hence the importance of COPE. This organisation educates visitors on the problem, and provides victims with prosthetic limbs and rehabilitation.

With its French past, you won’t struggle for good food in Laos. For lunch, go to one of the many baguette cafés scattering the streets. For dinner, choose between a plethora of cuisines from high-end French and Italian restaurants to more authentic Laotian eateries and even incredible Indian food. The nightlife, like the city, is quiet with most places closing around midnight. For a cultural evening see traditional dancers at the Lane Xang Hotel or watch a performance at the Laos National Culture Hall. To let off some steam, go to the 70s-style bowling centre for cheap games, drinks and cheesy music. 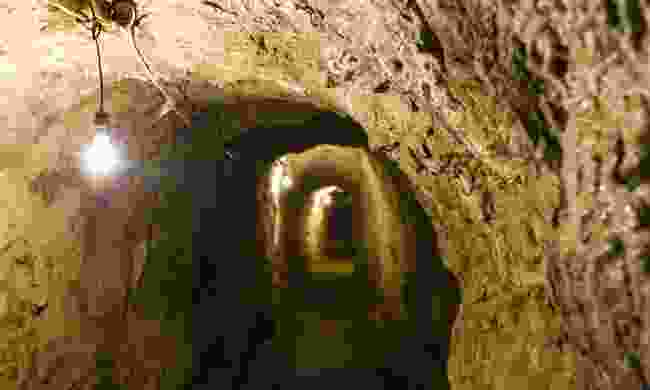 Despite suffering heavy bombardment at the hands of the USA, Vieng Xai, a valley of verdant hills, quaint houses and manmade lakes, is astonishingly beautiful. Of the hundreds of caves in the district, only seven are open to visitors. But even this small handful will give you a unique insight into war-time Laos.

This is no ordinary cave trip. These rock shelters which were inhabited by civilians and politicians during the nine years of war are more like an intricate network of museums. The old living quarters haven’t changed much, and with tour guides and audio guides available, it’s a real opportunity to see for yourself just how big a role the caves played during the war.

Tham Than Souphanouvong is a lair fit for royalty and housed Prince Souphanouvong, or ‘the Red Prince’. It has wooden floors, bedrooms, meeting rooms and storage areas for artillery. Outside the entrance is the Prince’s house where he lived after the war. Dive into politics at Tham Than Kaysone, where the Prime Minister from 1975-1992 lived. Here you’ll find busts of Lenin and Che Guevara. One of the deepest caverns, Tham Xieng Muang was used as a hospital.

5: Trek your way through Phongsali 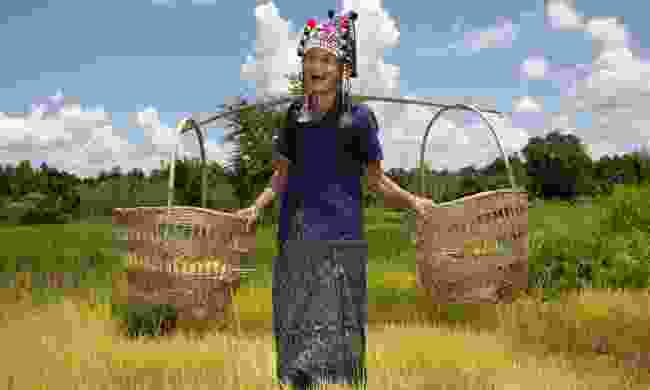 If you thought you didn’t need to pack a coat for Laos, think again. At an altitude of 1,626m, mountainous Phongsali gets cold, but it’s worth bracing it for the splendid panoramic views. The cloud-cladded mountains and a vast, verdant jungle are just some of the reasons this region is Laos’ go-to trekking spot. Trekking tours include hikes up mountains with forest views, staying with the unique Akha Puxo people and descending into a valley to see rice paddies sprawl out around you.

Due to China’s influence on Phongsali, the architecture is fascinating, with buildings fluctuating between industrial Chinese concrete blocks to tin-roofed houses and mud huts. To feel like you’ve travelled to China, visit the Yunnanese shophouses and the Chinese temple. For a history of Phongsali, head to the Museum of Tribes to find information, photos and colourful costumes.

6: Soak up the waterfalls in Si Phan Don 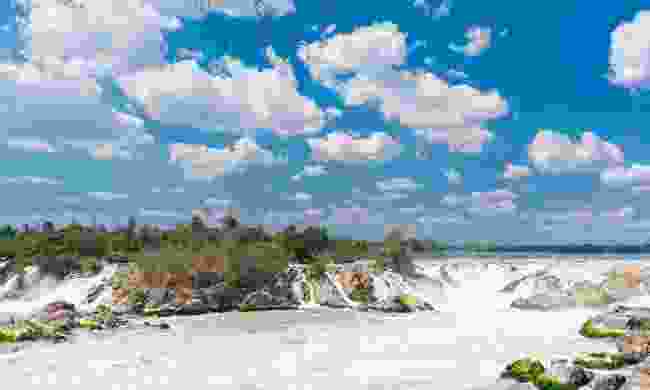 The Khon Phapheng Falls, also known as the Niagara of Asia (Shutterstock)

Head south to Si Phan Don, an archipelago of islands which is home to the Mekong’s most magnificent waterfall, Khon Phapheng Falls. With the cascading water crashing and frothing over the rocks, it's no surprise it’s called the Niagara of Asia. Go early to catch a glimpse of a rainbow on the mist and to avoid the worst of the huge crowds that gather here.

For a cheaper and quieter experience, head to Don Khon to find the fast-flowing rapids of Tat Somphamit cutting paths into the rocks it runs along. Also known as ‘Spirit Trap’, locals believe the falls wash bad spirits down the river. Watch the water flowing as you eat at the nearby restaurant or go to Tay Somphamit beach for a safe swim. Another quieter but still impressive option is Khon Pa Soi Falls. Walk along the suspension bridge to Don Po Soi island for the best views of the waterfall.

If you’re not near Si Phan Don but still want a waterfall fix, get a tuk-tuk from Luang Prabang to the picture-perfect Kuang Si Falls. With so much to do on the ascent, it’s possible to spend a whole day here. At the bottom of the fall is a bear sanctuary where moon and sun bears lounge on platforms. Head to the very top to stand above the fall, listening to the water crashing below and look out at a tangle of trees working their way up the mountains ahead. Continue along the tree-lined mud path towards the natural sacred spring, spotting bear prints along the way. Head back down the waterfall, stopping at the crystal-clear pools to cool off.

7: Monkey around in Huay Xai 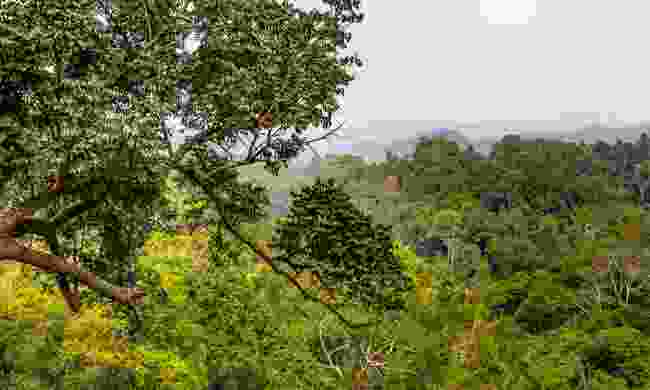 A view of the jungle of Nam Kan National Park (Shutterstock)

If spending your nights sleeping in sky-high treehouses alongside gibbons, and days ziplining from tree to tree is your idea of jungle heaven, then you’re in luck. In Huay Xai, near the border with Thailand is the Gibbon Experience. Based deep in the Bokeo Nature Reserve, the experience offers visitors the chance to spend three nights in the treehouses.

Spend your mornings with the guides gibbon-spotting, seeing other wildlife such as giant squirrels and Asiatic black bears. Or you can choose a three-day option, trekking for around three hours each day along the Nam Nga River passing a fresh water swimming pool and a waterfall. One of the treehouses you’ll bunk down in overnight offers stunning sunsets across the valley.

The Gibbon Experience invests much time in reforestation programs, looking after old trees as well as planting a diverse range of new ones. They also work with the government to employ park patrollers who guard against illegal logging, hunting and fishing. It’s been such a huge conservation success story that a new national park has been created within the reserve. At 136,000 hectares, the Nam Kan National Park is home to the most pristine forest in all of Laos, an abundance of wildlife and Laos’ biggest tree.