7 alternative 'Changing of the Guards' ceremonies around the world

Fancy a bit of pomp and circumstance, but without the massive crowds of Buckingham Palace? Seek out these spectacular and sombre military ceremonies on your travels

This re-enactment of an ancient ceremony takes place at the main gate of Gyeongbokgung Palace in downtown Seoul. The guards wear royal uniforms, carry traditional weapons and play traditional instruments exactly like their forebears did back in 1469 when they had the altogether more important task of protecting the Emperor. 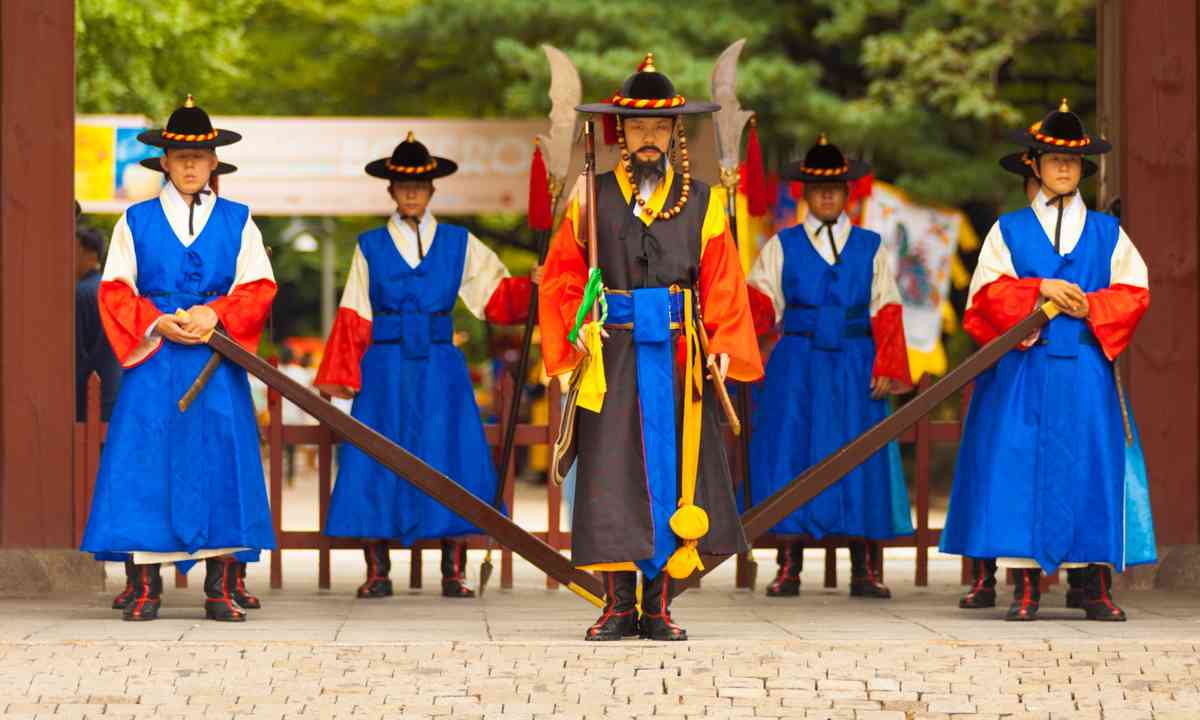 The ceremony is colourful and lively, and one of the few places in Seoul to see ancient traditions and costumes. Don’t be surprised to find yourself rubbing shoulders with locals who will be just as excited to see the spectacle as you.

This somber ceremony held every hour commemorates the soldiers who have given their lives in all the conflicts the US has fought in. 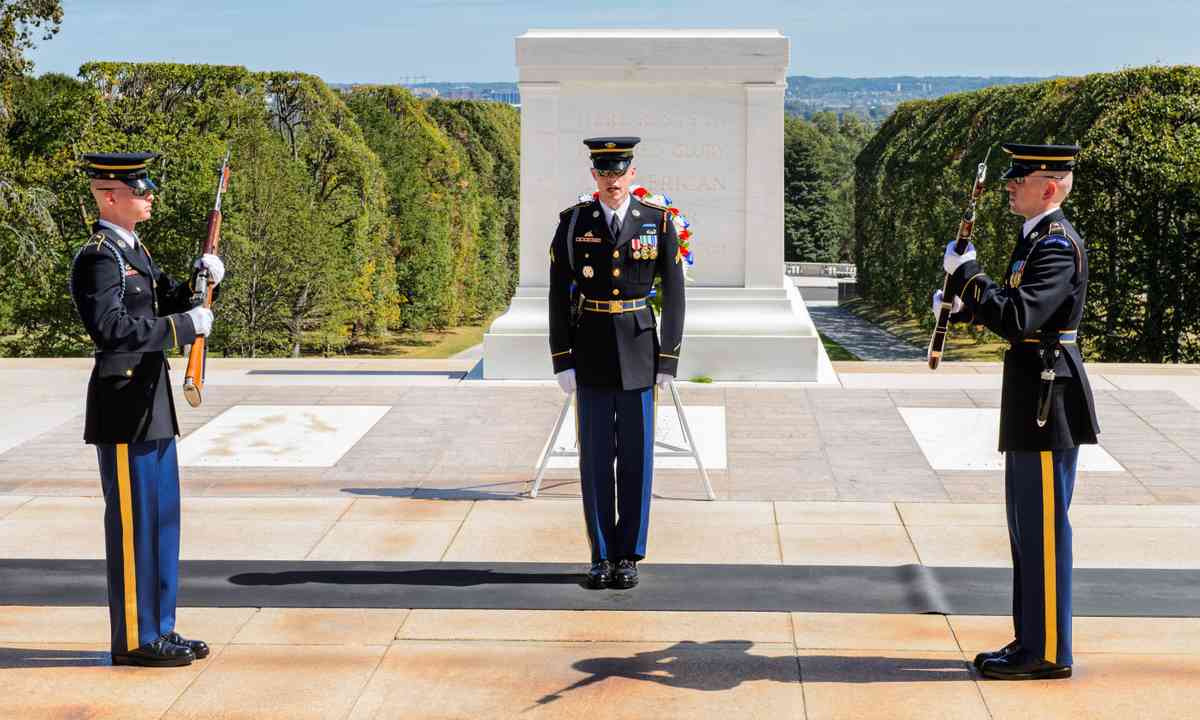 Soldiers presenting arms at the Tomb of the Unknown Soldier (Shutterstock.com)

After the turn, the sentinel executes a sharp "shoulder-arms" movement to place the weapon on the shoulder closest to the visitors to signify that the sentinel stands between the Tomb and any possible threat.

The guard is changed every hour on the hour October 1 to March 31 in this elaborate ritual, and every half hour from April 1 through September 30.

Featuring high kicks and shoes with pom-poms, this ceremony at the Presidential Mansion, just off Syntagma Square, has long been a favourite with visitors to the Greek capital. But behind the flamboyant costumes are some of the toughest soldiers in the country, the Evezone, charged with protecting the parliament and honouring the fallen symbolized by the Tomb of the Unknown Soldier. 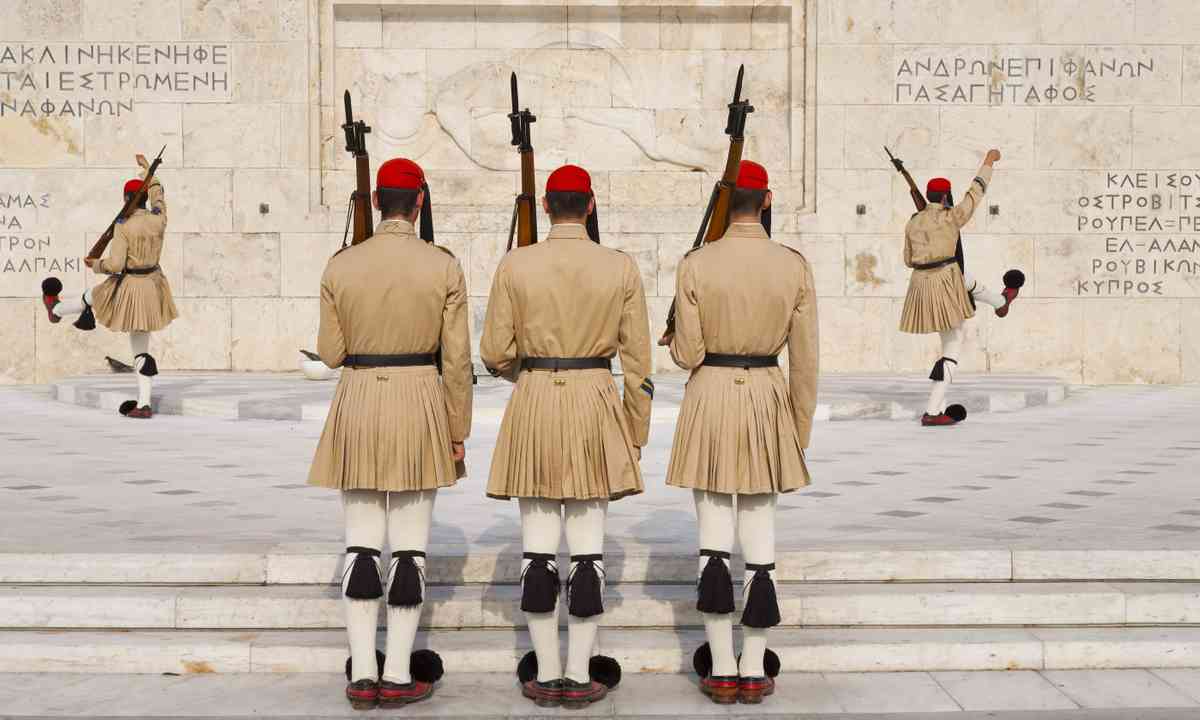 The Evezone provide a 24-hour honour guard, with an hourly sentry change, which is carried out in slow motion to help with blood circulation after standing absolutely motionless. The changing of the guards ceremony is held on Sundays at 11am when the guards wear their official uniforms, based on those worn by the Kleftes and Armatoloi, two groups of Greek warriors during the 1821 War of Independence against the Ottomans.

The white skirt of the uniform has 400 folds to represent the 400 years of Ottoman occupation over the Greeks. And those famous shoes, red, made of leather, with a small tuft in front. Each shoe weighs three kilos.

There are summer and winter versions of the daily changing of the guard at Stockholm's Royal Palace, but it's summer that attracts the big crowds. Between April 23 and August 31 the guards dust off their brilliant blue summer uniform – the one with white trim – and give their pointy Pickelhaube steel helmets a polish. 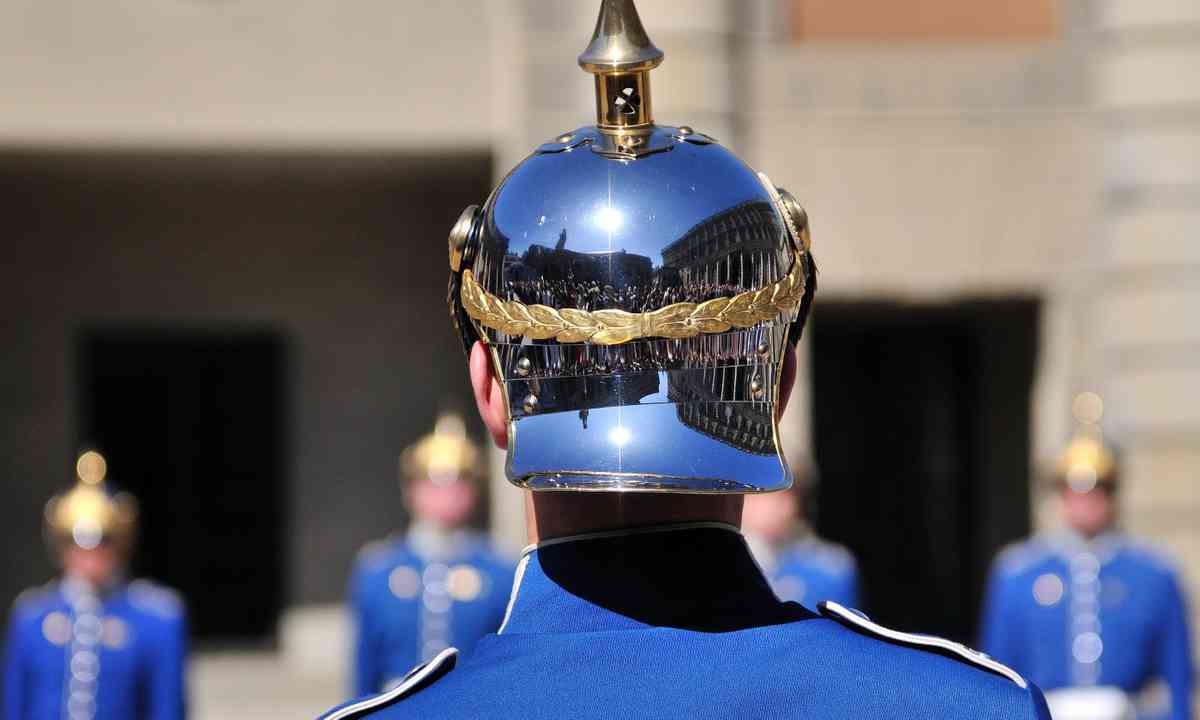 The guards assemble in the forecourt of the official residence of King Carl XVI, the biggest palace in the world still used by a head of state. The main Change of Guard takes place at noon every day but then there is also a minor versions every hour at the five guard posts dotted around the Royal Castle.

If you like your changing of the guard ceremonies colorful, loud and verging on the ridiculous, then the Beating Retreat (or lowering of the flag) ceremony and the Wagah border between India and Pakistan is the one for you. 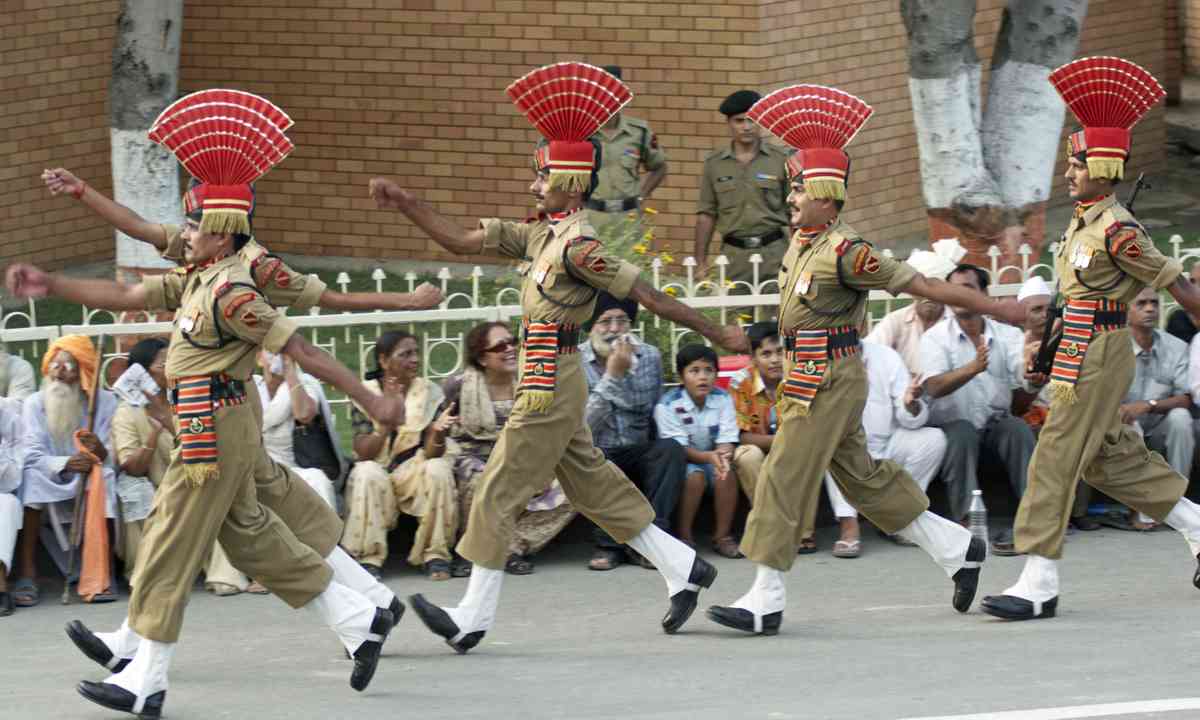 Indian soldiers off to lower the flag (Shutterstock.com)

This ceremony takes place every evening before sunset and is characterised by elaborate and rapid dance-like manoeuvers and ends up in the perfectly coordinated lowering of the two nations' flags.

For something altogether more laidback, consider the changing of the guard at midday at the Vatican. Indeed, if it wasn’t for the ridiculously bright uniforms of the fabled Swiss Guards, it would probably go unnoticed. 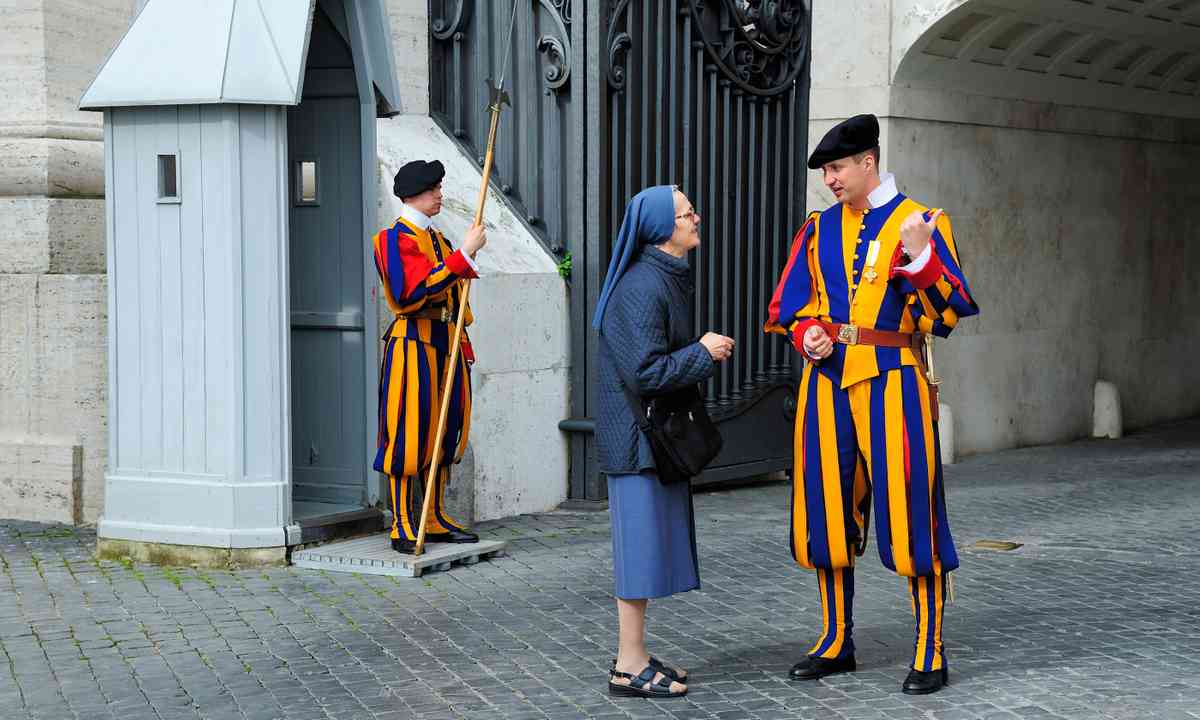 The ceremony is held at The Arch of Bells, on the left side of St Peter's Basilica as you face the church.  If in doubt, just look for the chaps wearing a floppy beret and puffy sleeved shirts and pantaloons in blue, red, orange and yellow.

Got a hankering for unbridled British pomp and ceremony but unsure about the ridiculous crowds that gather outside Buckingham Palace. You need to jump on the train and head south to Windsor, an hour or so from London by train. 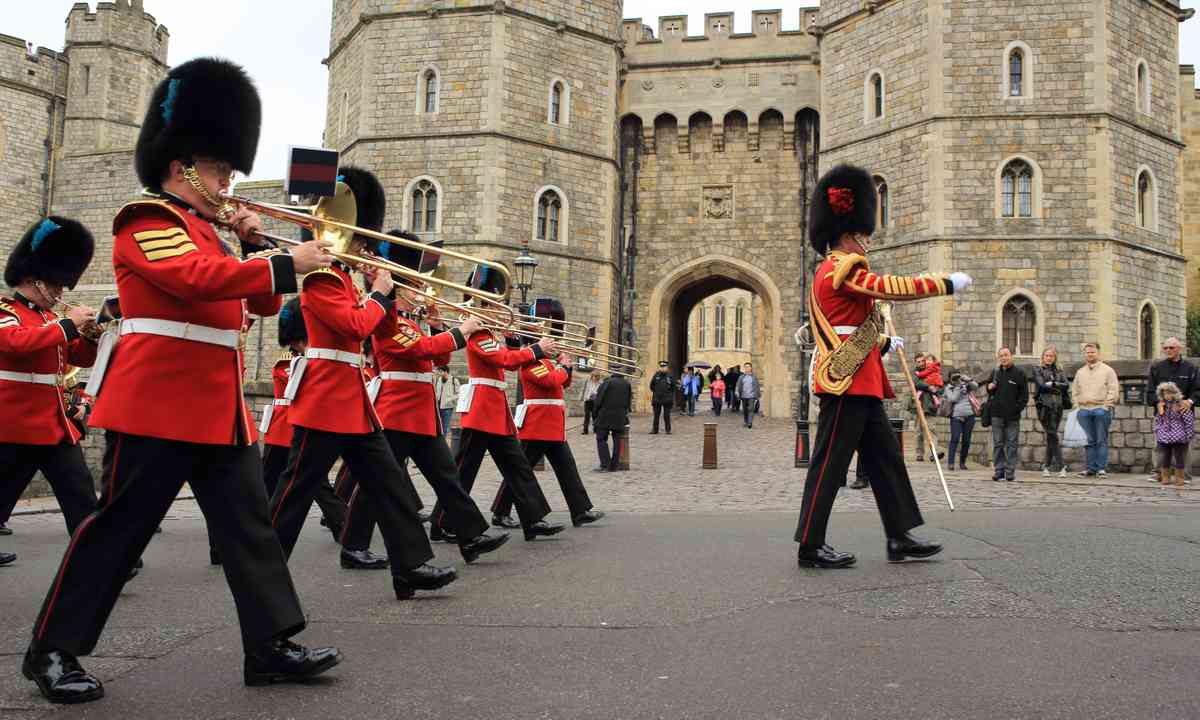 Changing of the Guards at Windsor (Shutterstock.com)

The changing of the guard at Windsor Castle, is a smaller affair than the one in London but is just spectacular.  The Guards, in their full-dress uniform of red tunics and bearskins and accompanied by the Guards Band march from Victoria Barracks to the castle. Their route takes them along public roads, past the Parish Church and the Guildhall, so you can watch them pass by from the footpath.

The ceremony takes place daily, during April, May, June and July and on alternate days from August to March.

Main image: The Greek Evezone in their traditional uniforms (Shutterstock.com)