10 incredibly beautiful pagodas from around the world

The distinctive multi-story design of a pagoda always appears at one with its environment, whether that's a big city or a hidden mountain retreat. Designed to connect earth and heaven, here are our favourites 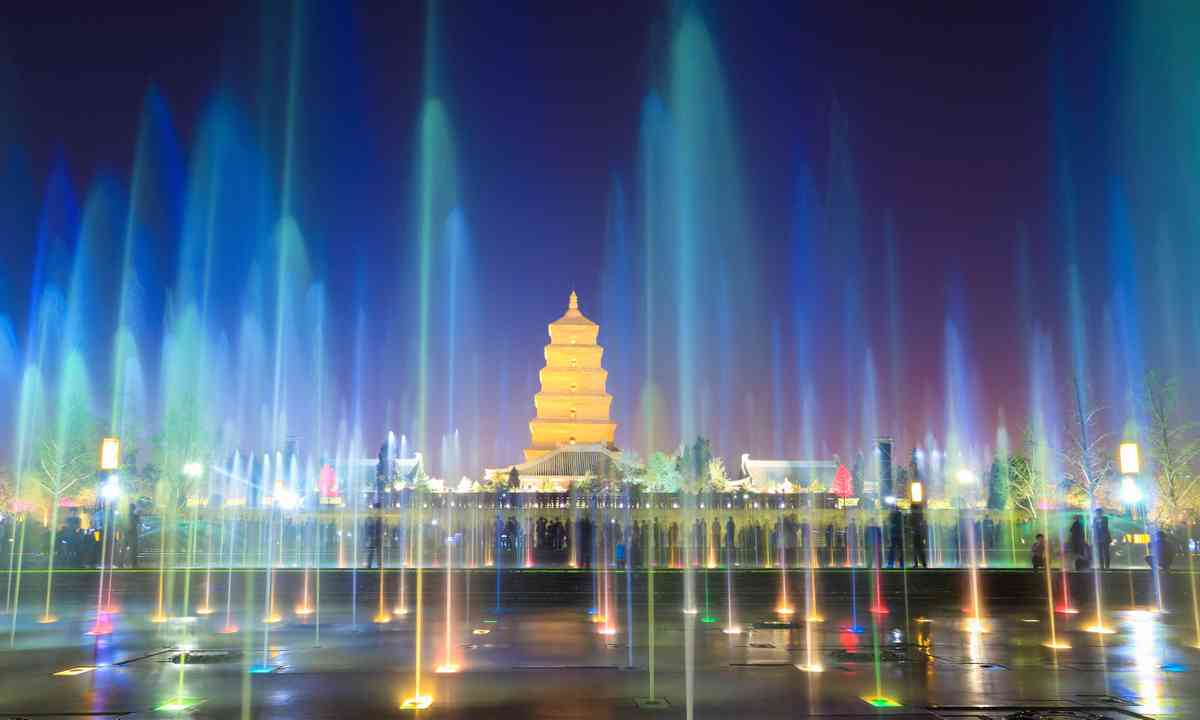 Built in 652 to house sutrines and figurines of the Buddha that had been brought back to China by the Buddhist traveller Xuanzang, the Big Wild Goose Pagoda looks out of the city of Xian in China’s northwest Shaanxi province.

The pagoda was built from bricks, without using cement. Its distinctive façade was renovated during the Ming Dynasty and the building developed a perceptible lean to the left after an earthquake in 1556. A music fountain has been built in the north square and regularly hosts spectacular light and water shows. 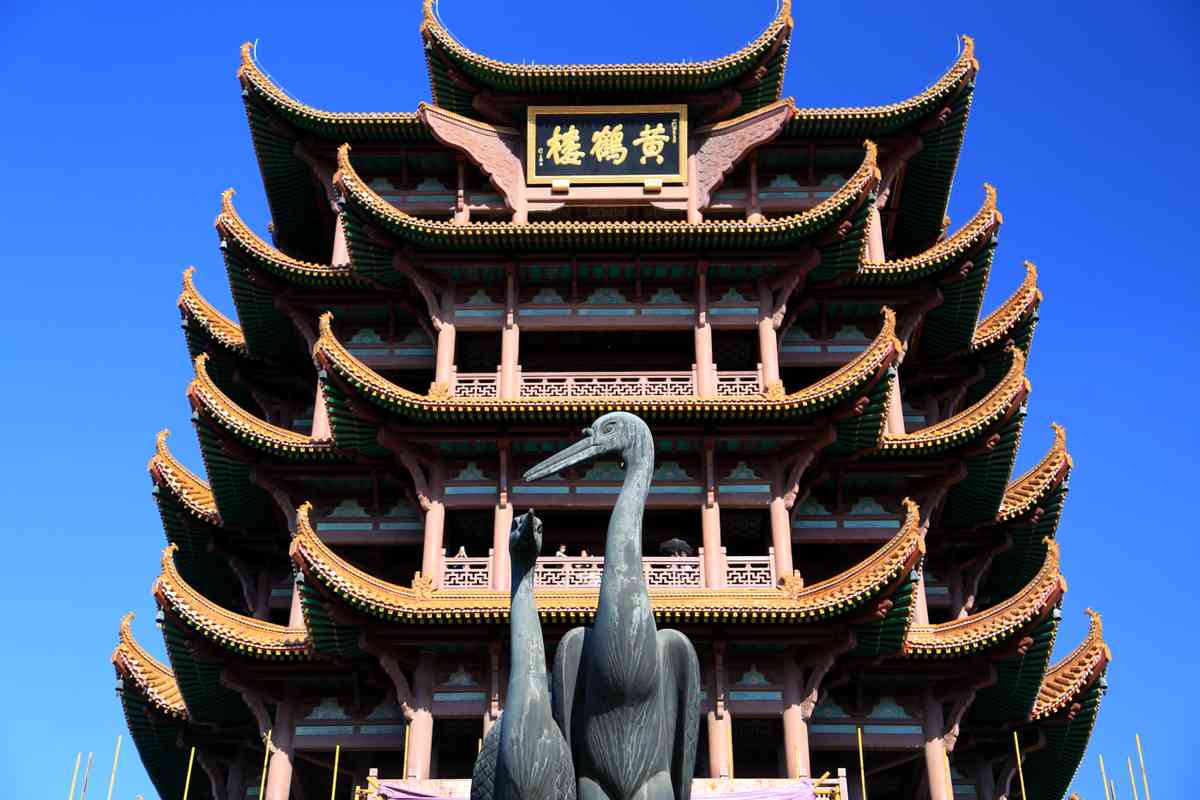 Crane outside the pagoda. (Dreamstime)

Built on top of Snake Hill in Wuchang, near Wuhan, the Yellow Crane Pagoda was a popular tourist attraction during the Tang Dynasty, particularly the literati, many of whom wrote poems about it, making it famous across China. It was believed that climbing the tower brought visitors closer to nature.

In 1985, it was disassembled and relocated to make way for the Changjiang River Bridge, the 12th time that had happened in the building’s 900-year history. Visitors can still climb to the top today, and while they may not feel closer to nature, they will enjoy great views over Wuhan and the Yangtze River. 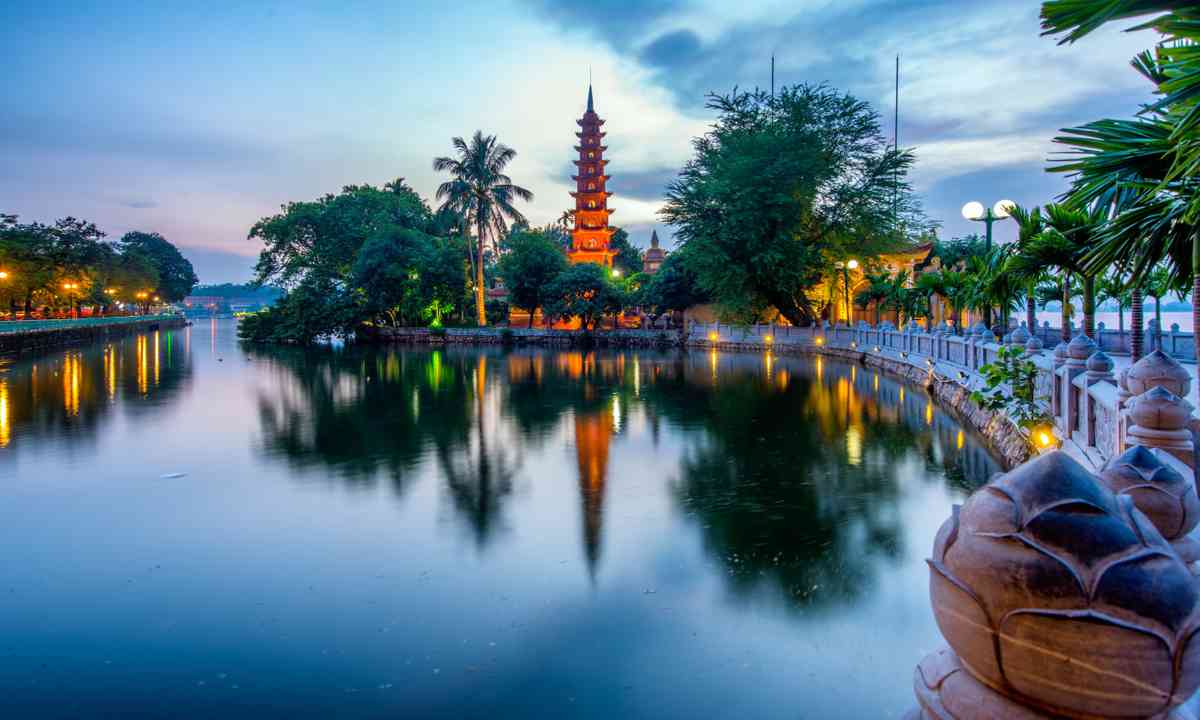 Located on a small peninsula on the east side of West Lake, Tran Quoc Pagoda is the oldest pagoda in Hanoi. It is over 1500 years old and was recently voted the most beautiful pagoda in the world.

The pagoda’s lakeside setting is particularly enchanting and visitors are given incense to burn at the various shrines within the complex. Keep an eye out for the Bodhi tree. It grew from a cutting taken from the original tree in Boh Gaya in India, under which the Buddha sat and achieved enlightenment. 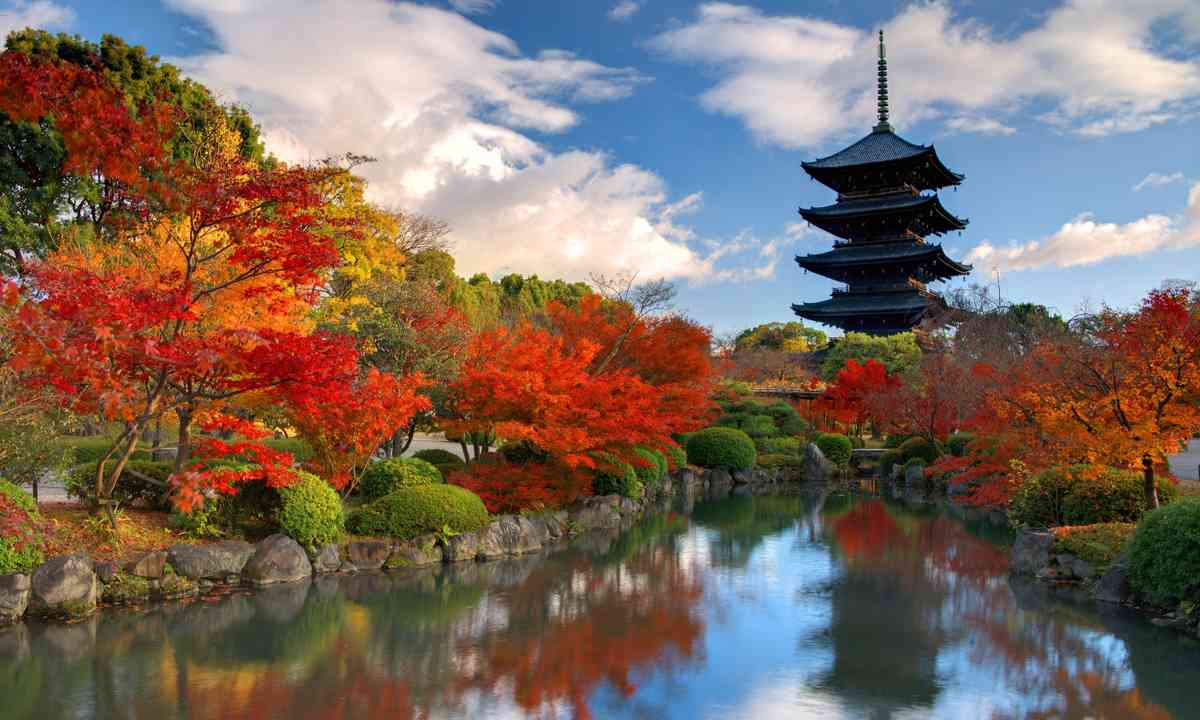 At 57 metres tall, the pagoda at Toji temple in Kyoto is the tallest in Japan. Its graceful lines and beautiful setting have made it a symbol of the city. It's best viewed in Autumn, when the autumn leaves are at their most striking, or in Spring, when the cherry blossoms are in bloom.

Built by Kobo Daishi in 826, the ground floor houses four statues of Buddha and is occasionally open to the public. Most visitors, however, are content with wandering the picturesque grounds and snapping pictures of the pagoda from various viewpoints and beauty spots. 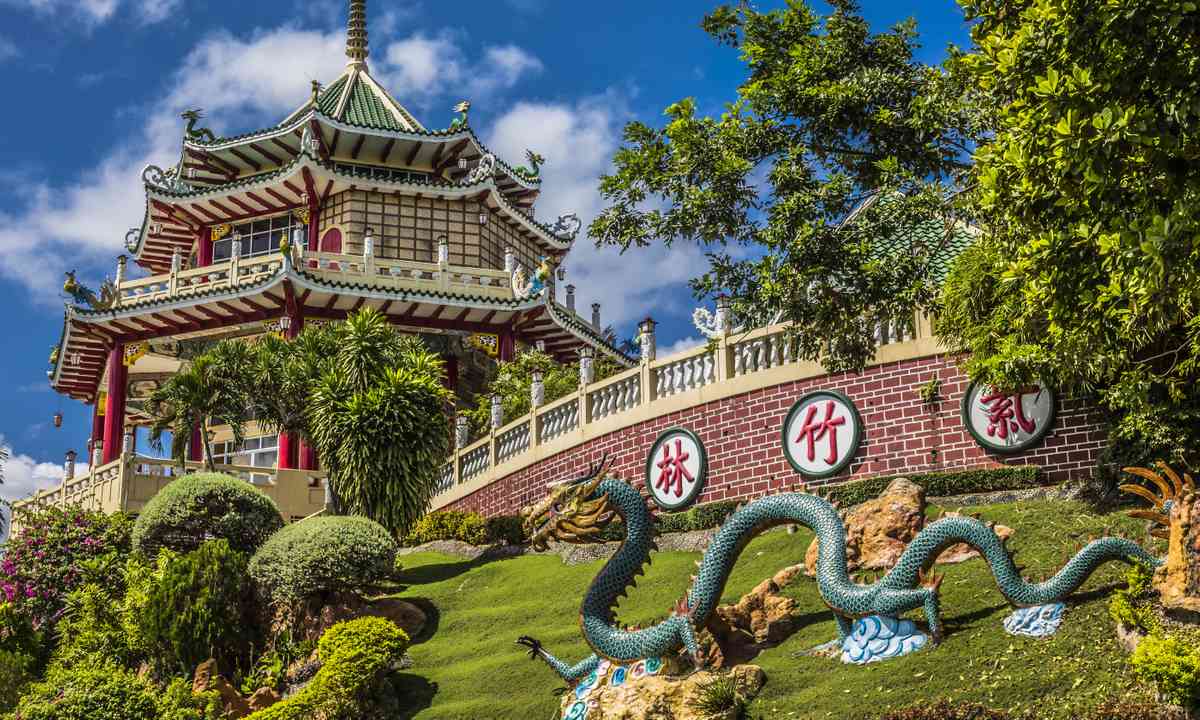 The pagoda and the dragon (Dreamstime)

Set in Cebu’s exclusive Beverley Hills district, the Cebu Taoist Temple and pagoda was built in 1972 by the city’s substantial Chinese population. As a recent build, it has some interesting ‘features’, including a gaudy, painted concrete dragon out front.

The temple is open to worshippers and non-worshippers alike. If you want to ask a priest to pray for you, however, you have to throw two wooden blocks in the air. If both land with a printed design faced up, you can approach a priest.

Note that the temple has a strict dress code and there are parts of the complex where you are not allowed to take photos. 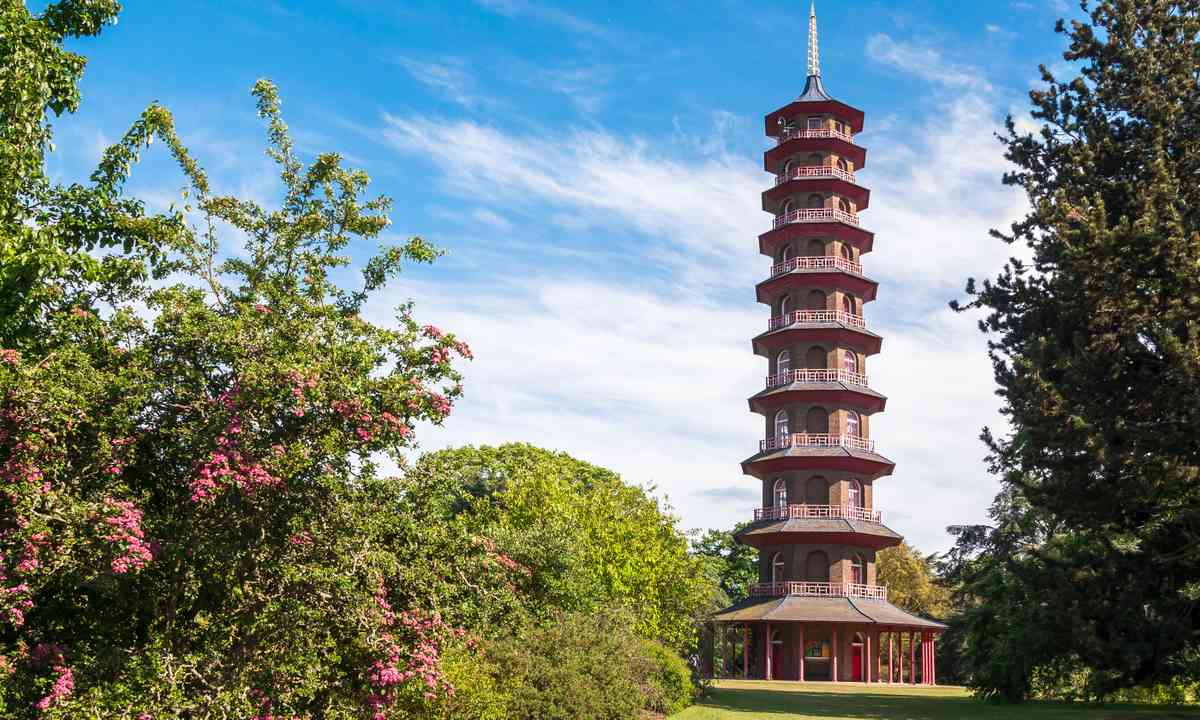 The Pagoda in Kew Gardens (Dreamstime)

The iconic pagoda in London’s Kew Gardens was built at the height of the 18th century craze for Chinoiserie and caused quite a stir when it was complete in 1762. Standing at over 50 metres tall, many were convinced it would topple over.

255 years later, it is still standing, and this relic of Georgian London continues to delight visitors. It is currently being restored to its 18th century splendour, including a splash of paint for the first time since it was built.

There are also plans to replace the four dragon statues that went missing in 1784. Rumour has it they were flogged off to pay the Prince Regent’s debts. 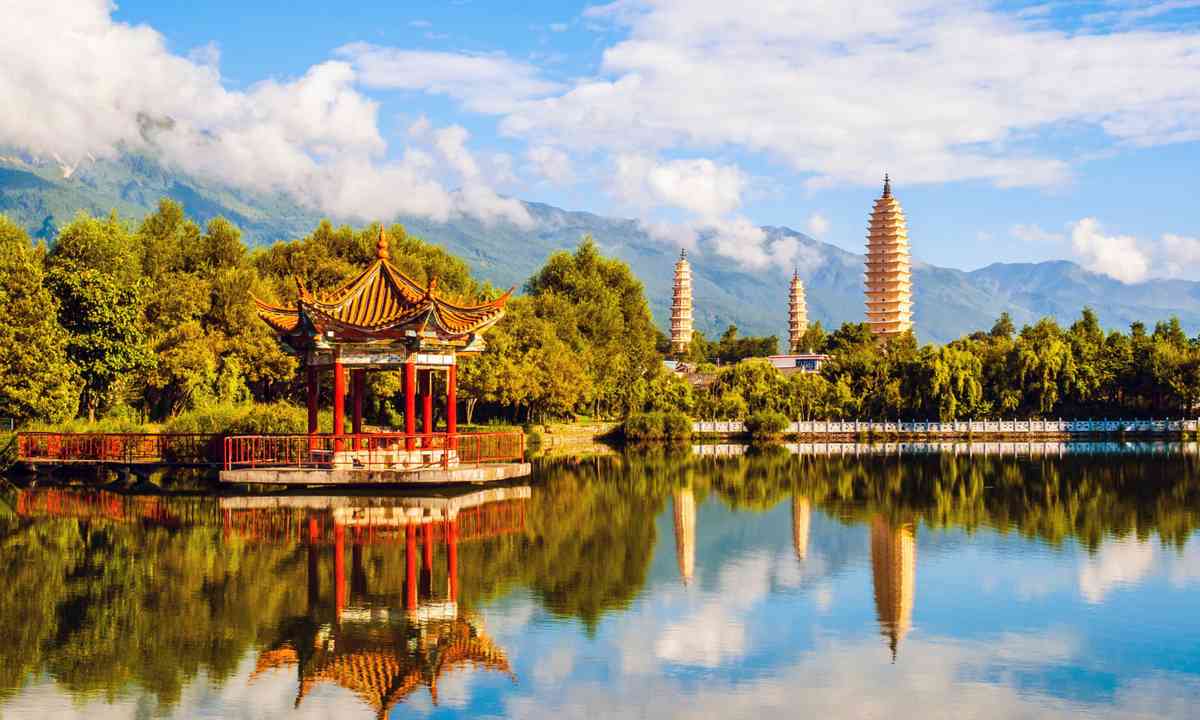 The Three Pagodas, backed by the Cangshan Mountains (Dreamstime)

The Three Pagodas in the ancient city of Dali are among the best preserved Buddhist structures in China and have endured several man-made and natural catastrophes since Emperor Quan Fengyou built the middle one in 840 AD.

The other two pagodas were built a century later and stand 25 metres shorter. Together, they form a symmetrical triangle, designed to ward off the dragons that legend claimed bred prolifically in the swamps around the city. They have survived numerous earthquakes in the region and remain one of Dali’s most popular tourist attractions. 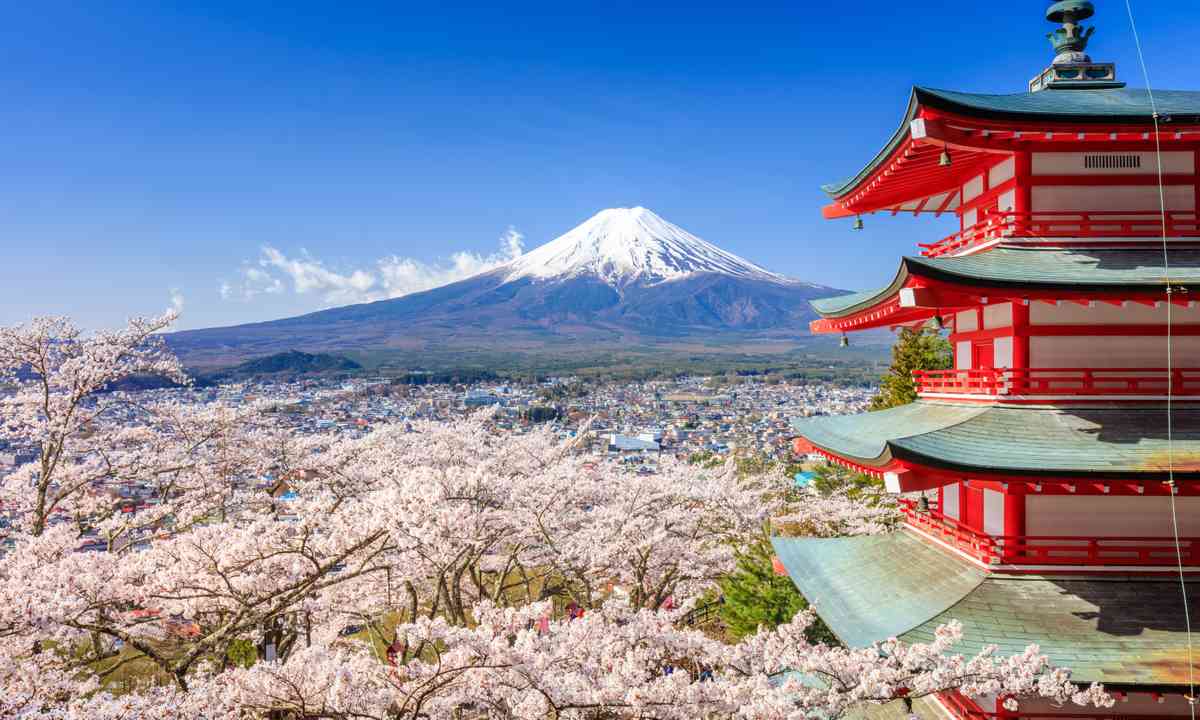 Built as a peace monument in 1963 and easily reached by train from Tokyo, the Chureito Pagoda in Fujiyoshida has the most astonishing backdrops of any pagoda in the world: Mt Fuji.

Of course, Fuji-san is not always visible. But when it is, and the sakura are in bloom or the leaves have an autumn hue, it is a sight that will truly take your breath away.

Set in the heart of Arakurayama Sengen Park, the five-story pagoda is perfectly placed. Climb the 400 stairs just behind it for the best viewpoint. 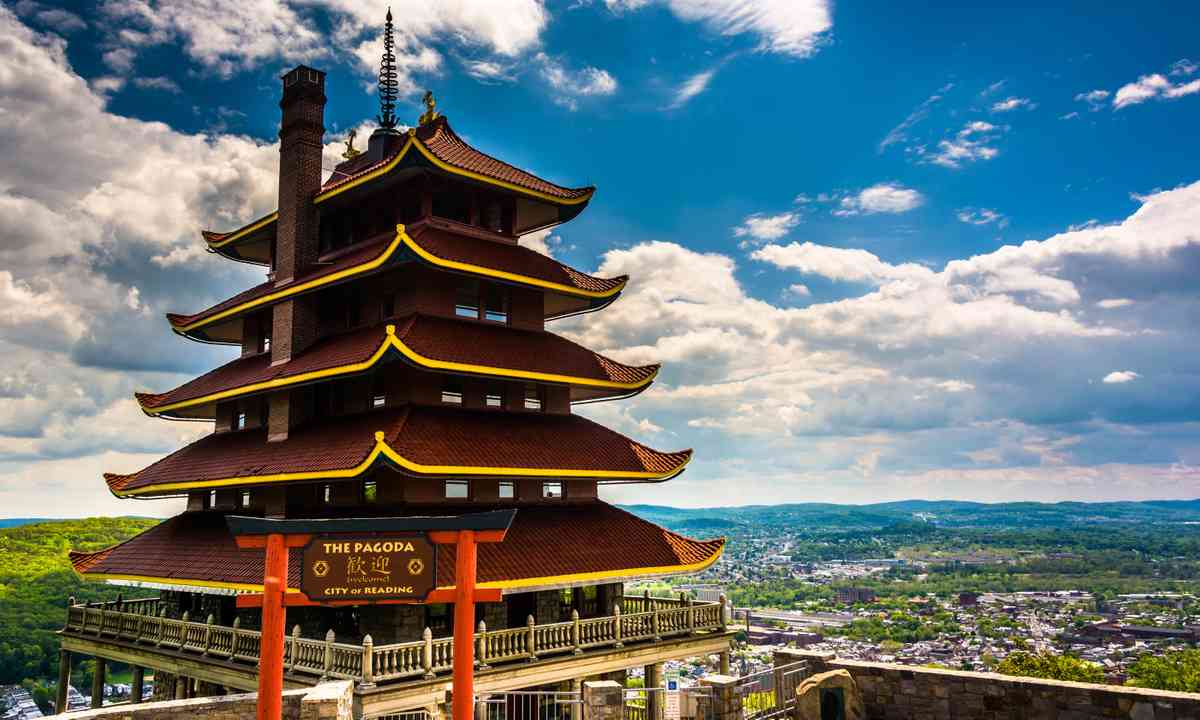 Overlooking the city of Reading (Dreamstime)

A novelty building on top of Mount Penn, overlooking the city of Reading in Pennsylvannia, the Pagoda on Skyline Drive was built in 1908 for $50,000. Built as a hotel and restaurant, it was meant to be the centrepiece of a luxury resort. When that fell through, it was donated to the city.

Today, it houses a small café and gift shop and has assumed the role of ‘city icon.’ It is on the U.S National Register of Historic Places. Here's a little known fact: a massive bell, cast in Japan in 1739, and bearing an inscription of a prophecy about the end of time, hangs from the top floor. 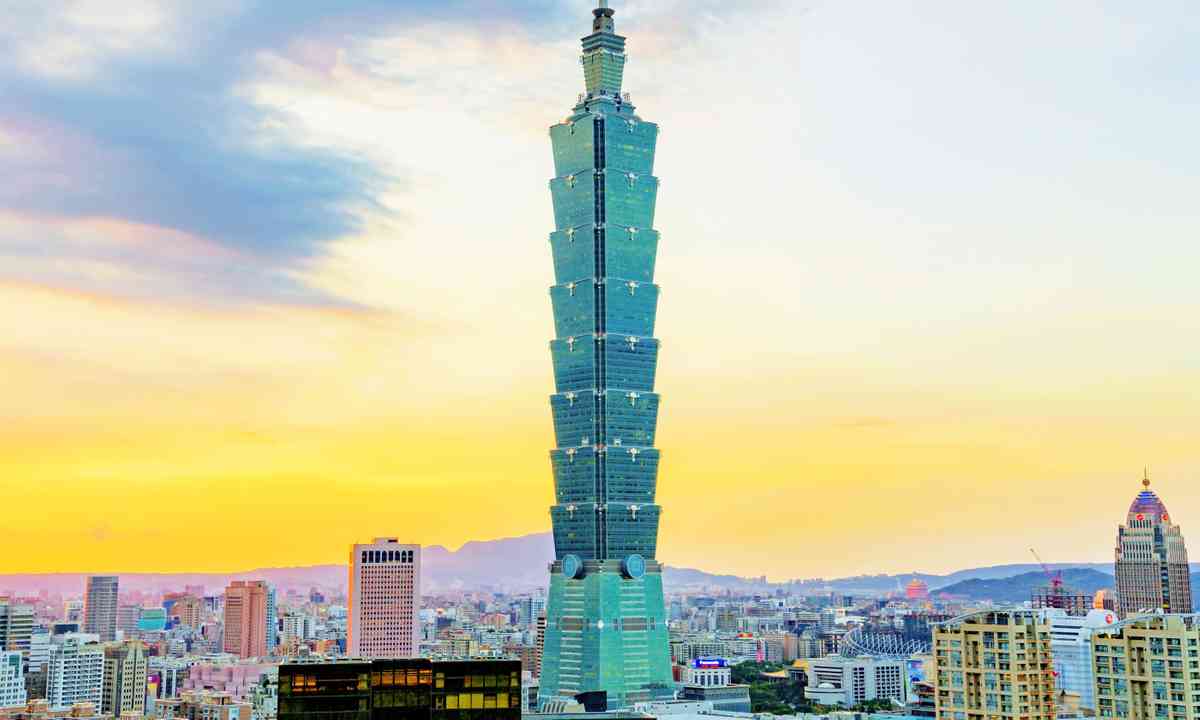 This 1,671ft-tall tower in Taipei isn’t technically a pagoda, but its iconic design was inspired by them. It features eight flared tiers, an auspicious number in Buddhism, and has been designed to withstand a once-in-2500-years earthquake.

Completed in 2004, it was the tallest building in the world until the Burj Khalifia in Dubai soared past it in 2009. Boasting 101 floors, it is still extraordinarily high and a visit to the outdoor observation deck on the 91st floor confirms that it definitely achieves the purpose of all pagodas: to connect the earth to the sky.