10 breathtakingly beautiful places that are perfect for a digital detox

Between our iPhones, tablets, laptops, desktops, TVs and smart watches, it's rare we have a chance to disconnect from the digital world. These destinations are perfect for powering down... Timeless deserts know nothing of technology and create the perfect setting for a digital detox. Colombia’s Tatacoa Desert, an arid region southwest of Bogota (a dry forest, rather than a desert) is a remote and largely untouched part of South America, where you can hop off the tourist trail and get lost for a while.

During daylight hours, strap on your hiking boots and explore the burnt orange, otherworldly scenery, occasionally stopping to pick the fruit from the cactus. Livestock graze freely across the landscape here, owned by a small population of people who have lived in the desert for generations, farming cows, sheep and goats. Ask a local farmer and they might give you a glass of freshly 'squeezed', warm goat’s milk.

At night, visit the observatory and gaze up at the night sky, free of light pollution. Here, you can see both of the planet’s hemispheres at once. Antarctica offers the ultimate escape from technology. As travel to this land of icy seas and glaciers has accelerated hugely in the last decade, it’s become easier and easier to reach Antarctica, but that doesn’t mean its connection to the digital world has developed.

You might, if you really want to, get a weak slow internet signal on the ship as you sail across the Drake’s Passage, but once you step foot on this the white winter wonderland, it’s time to wave goodbye to your internet connection and embrace the isolation of this phenomenal continent.

Who needs YouTube when you’ve got one of the world’s most dramatic and wildlife-filled worlds right in front of your eyes, including millions of penguins, whales, seals and colossal icebergs? The massive landmass of Brazil is dominated by the natural world, including the world’s largest tropical rainforest. However, if you’re looking for an alternative place to discover outside of the Amazon, head east towards Parque Nacional Chapada Diamantina in the state of Bahia.

Protected since 1985, this park sprawls out over 1,500 square kilometres and is home to many bird species,  including vultures, eagles, and macaws, who live alongside monkeys, wolves, and the occasional jaguar.

There are hiking routes all over Chapada Diamantina that will take you through the heart of this beautiful wilderness, past thundering waterfalls and across tabletop mountains, the remote landscapes earning earned Chapada the ‘Lost World’ nickname.

As the park isn’t fully developed for visitors, it’s recommended that you hire a guide, but if you’re experienced then it’s possible to brave the trails alone. Detailed guidebooks can be found in the nearby town of Lençóis. For the ultimate experience, camp out in the park’s caves for free with no permit required, or stay in one of several basic but very welcoming homestays to enjoy home baking and very local ingredients. It’s best to forget the idea of internet altogether in Cuba. Only around five per cent of Cubans have the internet in their homes, and there are widespread restrictions on which web pages can be accessed. For travellers, there are a few Wi-Fi zones, hotel connections, and Internet cafés, but for the most part the world wide web is hard to find on this paradise island.

That happily means there’s more time for exploring Old Town Havana, getting lost in the dramatic Viñales Valley landscape, or taking it easy on some of the best beaches in the world.

To get away from the ever-swelling crowds in Cuba, head to the island’s far corners. The beaches at María La Gorda in the west are far quieter than Varadero, or visit Baracoa, a colonial settlement in the remote east where Christopher Columbus dropped anchor in 1492. Tourist looking out on the Pans (Dreamstime)

Botswana’s Makgadikgadi Pans National Park, in the northern Kalahari, is one of the best places to disappear into, where wildlife and nature rule above all.

A system of immense salt pans, Makgadikgadi is a curious and unique place to be. The dry season turns the pans into a dry challenging environment, but when the rains come, wildlife flocks here en masse. Flamingos pick their way across the landscape, while zebra and wildebeest graze in the grasslands. Being here is like catching a live episode of Planet Earth.

This is also the home of the San bushmen, who still know how to hunt, find water, build shelters and make fires in the desert in traditional ways that have been passed down across the generations from long before the Internet was a twinkle in the creator’s eye. A nature walk with the bushmen across the Pans is a fantastic experience. 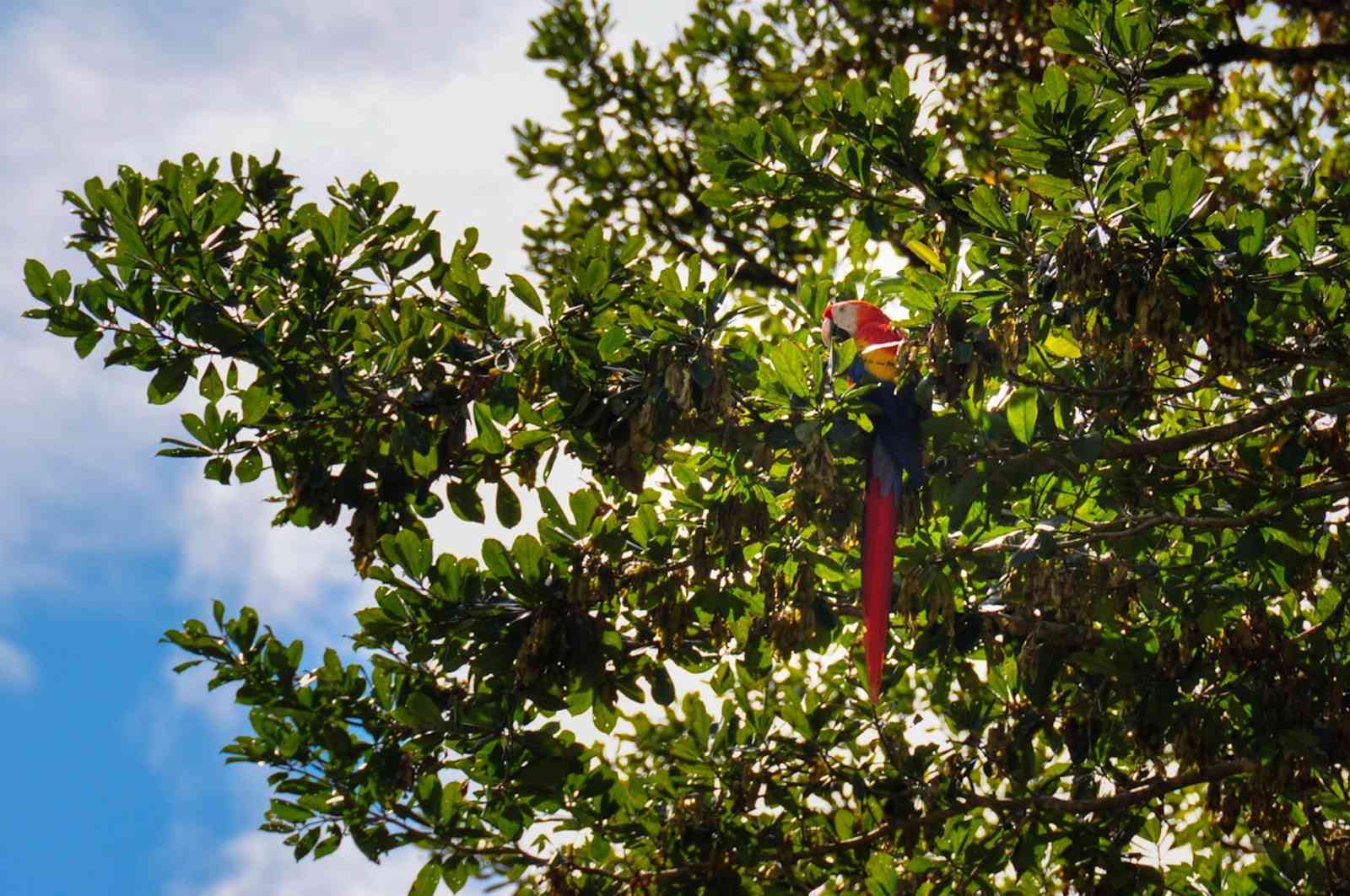 The earth’s deepest jungle corners offer some of the best places in the world for a digital detox. However, as an environment not built for humans, the secluded jungle can be difficult to reach and connect with.

Costa Rica is among the more accessible destinations for a jungle escape, with resorts and lodges scattered across its rainforest regions.

For a serious cut-off experience, head to the Osa Peninsula, one of Costa Rica’s most remote corners, where you can hike jungle trails and surf undisturbed.

Stay in a lodge to enjoy the sounds of the rainforest as your alarm clock. Greenland is fast becoming known as the place to go for a big adventure. There are few roads between settlements in the country, making boats, helicopters, and planes the more common forms of transport. Although an Internet connection can be found in most good hotels, it’s not difficult to cut yourself off in Greenland.

Head to Siorapaluk, one of the northernmost communities in Greenland, where only around 60 people – mainly hunters – live.

Venture east to Ittoqqortoormiit, gateway to Greenland’s incredible fjords, where you can go dog-sledding in winter and kayaking in summer.

Don’t miss walking part (or all) of the 164km Arctic Circle Trail to truly channel your inner polar explorer. A land that’s swept intrepid explorers off their feet for decades, Patagonia is one of the world’s best destinations for feeling at one with nature,. instead of your iPhone.

With 2017 marking 40 years since Bruce Chatwin’s legendary book, In Patagonia, there’s no better time than now to pay homage to this epic tale.

Parts of Patagonia are well-heeled, but due to the vast size of the region, there’s ample opportunity for getting really far away from it all, well beyond the reaches of a phone signal.

Chile’s Aysén region is a playground for hikers, where towering peaks and shimmering lakes take up every view and you can hop from mountain lodge to mountain lodge internet-free for days on end.

Head for Parque Patagonia, Chile’s newest National Park, set up by the late Doug Tompkins and his wife Kris as a gift to future generations, for a chance to see wild landscapes returned to their natural glory and wildlife, such as guanaco, flamingos and the ostrich-like Rhea. Lake in the Kackar mountains (Dreamstime)

Tucked in the northeast of Turkey, close to the Black Sea, the Kaçkar Mountains offer some of the most isolated mountain scenery that’s available just a short hop from Europe.

Mobile phone service drops off entirely in some parts of this wild nook of the world, leaving nothing but you and the crisp mountain air for company.

A popular activity in the Kaçkar is to walk the routes from Çamlihemsin and Yusufeli. The trails here can be difficult, with some reaching 4,000m high, but you’re rewarded with incredible views and a connection to the yayla communities, rural Turkish villages that often offer homestays in the region. Less visited and less developed that it’s neighbours, Laos is one of the most untouched destinations in Southeast Asia. While tourism has grown over the last few years and you'll find Internet access in tourist zones, such as Luang Prabang, Vang Vieng, and Vientiane, life in much of Laos still moves at a slow pace, especially in the more remote rural areas.

To feel the most cut-off, venture north to find hilltribe villages populated by small ethnic groups, such as the Hmong, Khmu or Akha people.

Trekking tours from Luang Prabang will take you up to these remote settlements, where life is basic and some of the villagers still wear traditional, ornate clothing. Many of these tours include homestay-style accommodation, where you can experience rustic Laos life first-hand.