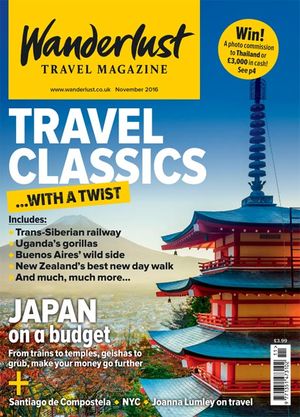 Travel Classics ...with a twist

Want to enjoy the bucket list experiences but do them a little differently? We reveal how to tick off the classics the Wanderlust way...

...the wrong way round. Hop aboard the longest train journey in the world as it celebrates its 100-year anniversary, but do it in reverse undertaking the classic Trans-Mongolian spur starting in Beijing and ending in Moscow

...linger for longer. Head to Bwindi Impenetrable National Park, where a limited number of visitors can head out with guides and researchers to see unhabituated gorillas and spend four times longer in their company than is usually allowed

...on a budget. Think that experiencing Japan's temples, ryokan and onsen means spending a fortune? Think again. with transport deals, free sights and a bit of insider knowledge, it's more affordable than ever...

...and it's not the Tongariro Crossing! That's right, there's a new 'best one-day walk in the world'. Join us as we head to Mount Taranaki to find out if this forest-rich mountain hike is a worth rival

...the wild side. Known for the urban sprawl, we scratch beneath its concrete facade to discover wild reserves, untamed deltas and a magical taste of pampas life.

Articles from this issue

8 trips with the world's top (and award-winning) guides