Adventurer Ben Fogle shares fond memories of this stunning Portuguese archipelago – a must visit destination on any traveller’s wish list... 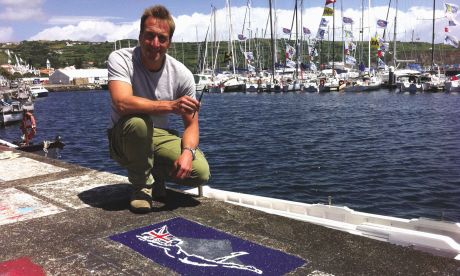 Ben Fogle looks wistful as he recalls his time in the Azores. “It’s Europe but with a twist” he says, bundled up in a café in West London, clutching an extra-strong cappuccino on the coldest day of winter so far. “Some people say they find islands imprisoning, but not me. I find them liberating. The isolation of the Azores is a big part of why I find them so special.”

One of the reasons Ben loves visiting the Portuguese archipelago is to train for a 5,000km charity swim from New York to England in 2014.

“The water is rather like Cornwall in summer.” But as he chats about his experiences on the nine islands, 1,500km west of Lisbon, that’s probably the only link that reminds him of home. “You’ve got endless ocean there – that’s what is so extraordinary about the Azores, you’ve got deep ocean all around. There’s every chance a mighty sperm whale will swim past you.

“It’s definitely not a mass market kind of place, or for those who just want sun and beach,” he says. They are easy to get to, though. From Gatwick there’s a nonstop flight that’s less than four hours to Ponta Delgada on the island of São Miguel between Easter and October every Saturday lunchtime. At other times of year it’s only a slightly longer journey with a change of planes in Lisbon.

Off the beaten track

But for those, like Ben, who want to get off the beaten track, the cluster of Europe’s westernmost outpost has something to please everyone, from whalewatching to climbing, hiking, kayaking, wine tasting, diving, fishing, cycling, birdspotting, surfing, coasteering, or soaking in a geothermal spring.

“Near Furnas there are some really amazing gardens called Terra Nostra Park, with a thermal swimming pool – the water looks rather muddy but it’s brilliantly soft, full of minerals, and you’ll want to spend all day in there. And nearby you can have a meal that’s been cooked underground by natural heat. Generally, the food is cheaper than mainland Portugal and there are decent local wines.”

“But one of the most amazing places on São Miguel is Ponta da Ferraria. It’s a natural geothermal rock pool on the shoreline. You can only get into the water at a certain tide when the natural hot water temperature is cooled by incoming seawater. You get in and see the waves crashing around you, but are protected by volcanic rocks, it’s extraordinary.”

Elsewhere Ben enjoyed kayaking on the sapphire and emerald waters of the Sete Cidades lakes – formed according to legend by the tears of a princess and a shepherd who shared a forbidden love – and plenty of hiking. “It’s very green for a volcanic island chain. A lot of people have a stereotype of a black, volcanic archipelago, and yes you can certainly find that, the raw volcanic ash, but there’s a lot of thick, green lush vegetation too.”

“My favourite walk was up Pico Mountain. It’s 2,351m high and snow-capped sometimes. It’s a round trip of about ten hours and you are advised to hire a guide. Standing on top of that volcano, the highest point in Portugal, looking out over hundreds of miles of ocean, cloud below you, really takes your breath away. It’s a truly magical site. The fact you climb down and you’re back at the sea, makes you feel like you’ve been on top of the world. It was so exciting to be in Europe but climbing a volcano, and to be there on your own.”

There’s one important addition that Ben intends to bring on future trips – his family. “Instead of beaches you have these rock pools, which are well protected so good for children. Islanders have built platforms so you can dive into the water if you want.  You can go coasteering too – higher jumps for the older ones, smaller heights for youngsters – and gorge walking.  And whale- watching is a family activity, as is swimming with wild dolphins.”

Whales are highly protected by the Azorean community and in fact, this year marks the 30th anniversary of the cessation of whaling. “I definitely want to go diving. It’s supposed to be amazing”. As it is, we have to face the realities of London’s dreary weather. But I think I know from the smile and faraway look in Ben’s eye where he would rather be.

Book to travel in April, May or October 2014 with Archipelago Choice and receive a free activity voucher worth up to £65pp. www.azoreschoice.com