For intrepid travellers, North Korea’s passport stamp is one of the most highly prized. This secretive country can only be visited as part of an expensive package, strictly on the government’s terms, but for those who make it in it’s a fascinating place. Discover a world where the internet and mobile phones are unknown, and where total obedience to the state is unquestioned. In addition to a visit to the capital, Pyongyang, and the Demilitarised Zone at Panmunjom, head to the north for pristine mountain scenery and the lovely resort of Kumgangsan.

Don’t take too many photographs. You can only take photos with your guide’s permission. Taking photos of soldiers, checkpoints, poverty and close-ups of people without their consent will cause serious problems. Pay particular attention if you are taking pictures of Kim Il Sung sculptures (never photograph just the feet, for example). The Korean public is obliged to report all photography. Don’t leave your hotel without your guide’s permission. A stroll through the city is possible but only with a guide. There are no internet cafes in North Korea. Make the most of it and enjoy life as it once was before the days of Google and Facebook. Leave your mobile phone and laptop at home.

When to go to North Korea

Late summer/autumn is best weather-wise and also means you’ll catch the Arirang Mass Games. However, part of the surreal joy of traveling in North Korea is staying at massive empty hotels, which is less likely at this time of year. But even in a busy year, North Korea sees only a few thousand tourists.

Pyongyang (FNJ) is just a little way north of the city.

Getting around in North Korea

Once through customs you’ll be met by your tour guides from the Korea International Tourist Company. They will be with you wherever you go, all day, everyday. You’ll travel by coach for the duration of your trip, except for excursions to Mount Paekdu, which involves flights. Note that it is routine for your guide to take your passport for the duration of your stay in North Korea.

If you go on a pre-arranged tour you’ll be offered the finest hotels in North Korea: four stars masquerading as five. They don’t come cheap, though. All amenities are provided to obscure the fact that you can’t leave the compound. Prepare for gambling, karaoke and bowling, all in a bid to make you forget how confined you are.

Food is pretty repetitive, often cooked in advance and served cold. Rice is prevalent, as is kimchi (spicy pickled cabbage). Barbecued meat is a national dish – it’s a tough place to be a vegetarian. Few people will ever have experienced a country with more extreme and weirdly labelled spirits; a particular, though revolting, favourite being deoxyribonucleic acid (aka DNA) liquor, which was best described as tasting like ‘dead man’s alcoholic puke’!

Crime is very low in North Korea. What is risky is openly criticising the regime while in the country. Note that hotel phones and faxes are likely to be monitored. Be considerate to your guides: disobeying them is likely to be far more dangerous for them than it is for you. 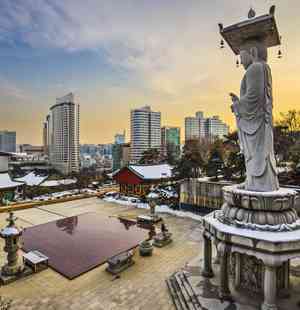