Dive under the waters of Greece to discover sunken ships, underwater museums and a vast array of colourful marine life, including turtles. Here's eight of the best spots for scuba divers...

Most Greek seas were for years off-limits for scuba divers to control antiquities pilfering; undiscovered submerged treasures were assumed to potentially lie anywhere, thus diving was forbidden except where expressly permitted. But a relaxation of restrictions after 2005 opened many coasts, both around the mainland and islands, to exploration. 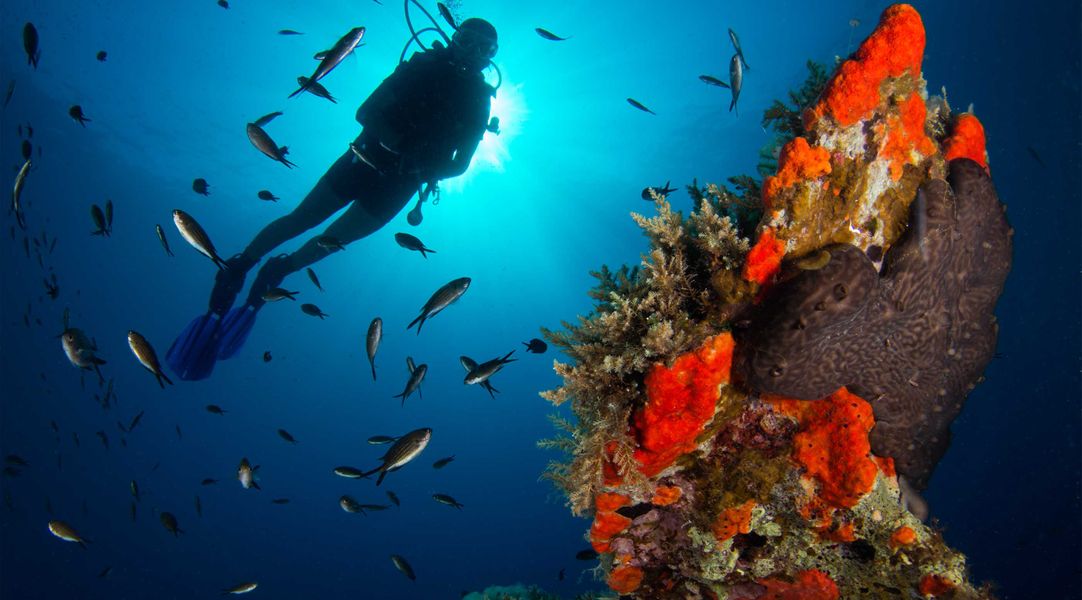 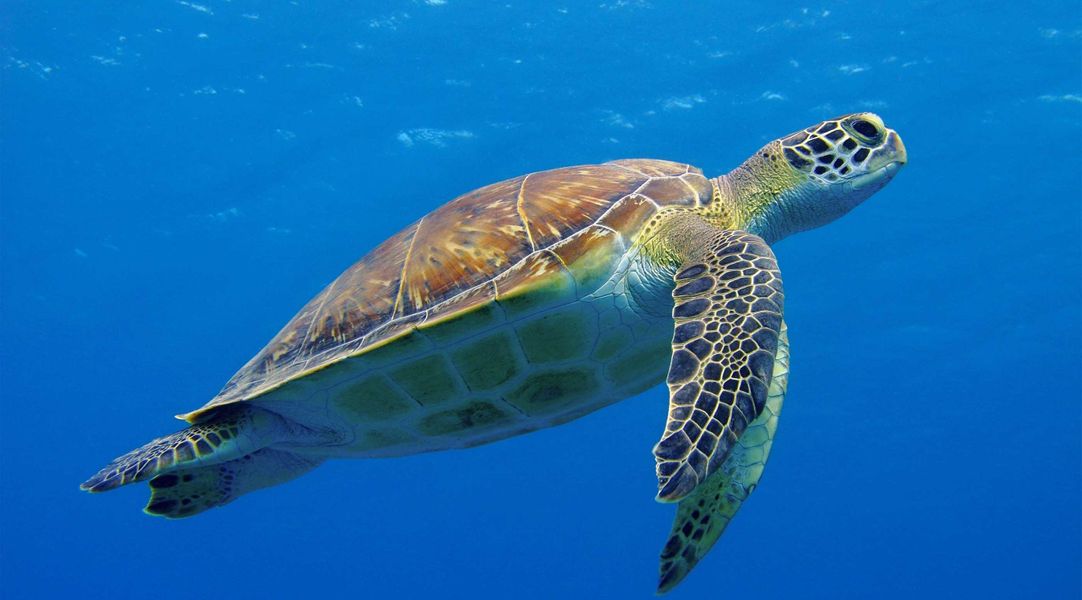 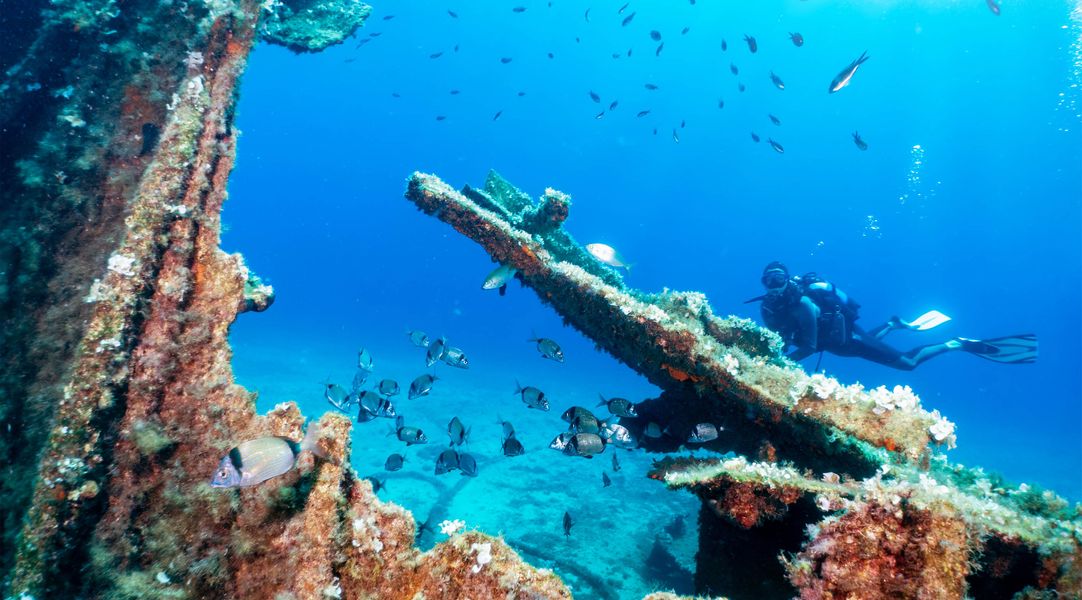 Sessile organisms like clown-coloured nudibranchs and orange sea-stars, slightly livelier fireworms, and patterned but surly moray eels are just some of the marine life on display. Submarine caves or tunnels are festooned with red soft coral, and big-wall dropoffs support shoaling fish.  If you're lucky – most likely if you're near Zákynthos – a sea turtle or a seal might pass by. You'll get a good view, too, with visibility typically occupying the 22–30 metre range, and can enjoy water temperatures in the low-to-mid twenty degrees Celcius.

Several underwater archaeological parks and museums have been created, where closely supervised divers may explore protected shipwrecks from various eras. Most wrecks become artifical reefs well colonised by assorted marine life, adding to their allure. Here's nine of the best places in Greece to dive... 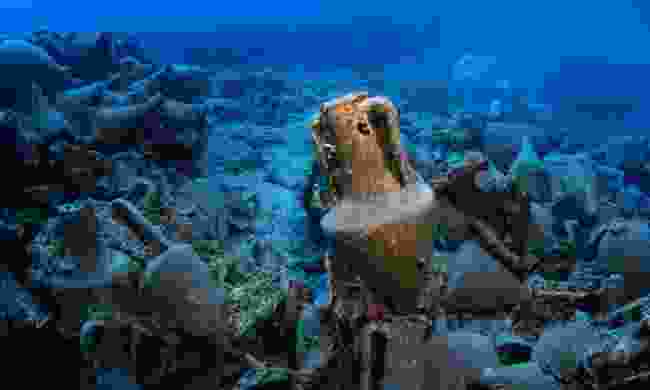 Dive in the waters surrounding the island of Alónnisos

Alónnisos in the northern Sporades is home to the largest natural marine park in the Mediterranean sea, spanning around 2,260km2, meaning there's ample space for a dive, and much to see. Swim in and out of the underwater caves for your chance to spot elusive monk seals alongside other rare flora and fauna.

As well as the wildlife on display, this underwater museum is home to one of the most significant ancient shipwrecks in the world. Close to the islet of Peristéra, a 5th century BC wreck lies more than 22-metres below the water, featuring a mound of 4,000 mostly intact amphorae - the actual ship has almost vanished over the centuries. Thought to have sunk in 425 B.C, the sunken ship was laden with more than 4,000 amphoras (vases). This remarkable sight will be open to the public in 2020, where you can enjoy a dive down and try and seek out some of the ancient relics. 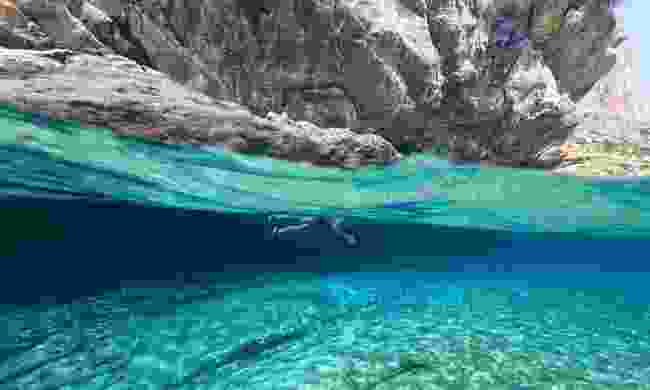 In the Cyclades islands, Amorgós was put on the tourism map by Luc Besson’s 1988 film The Big Blue. One prime local site is the Nikouriá cave where the walls are covered by multi-coloured sponges, soft coral and spiral worms with bright fish swimming in and out of sight.

Another popular diving haunt is the wreck of the 154-metre-long Manina 3 which sunk in 1981.  Dive down 30 metres to reach the impressive propellor, swimming in and out of the cargo holds on the way down.

One of the most breathtaking experiences can be had at the western tip of the island. Dubbed the Deep Blue Wall, divers can descend 40 metres and expect to see baracuda, blue and yellow damsel fish and even the occasional dolphin and turtle. 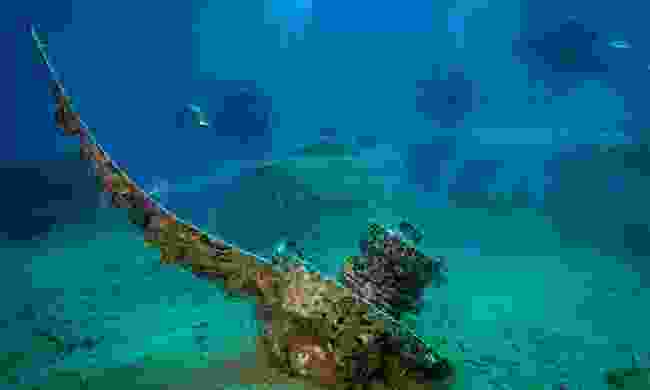 With gin-clear waters, an abundance of life and entire underwater cities of wrecks, divers will be delighted from whatever part of Crete they decide to enter the water at. Much treasure lies beneath the surface at Herakilon. One of the most famous places is the Messerchmitt wreck, a German World War II plane covered in plants and visited by many moray eels. Nearby, the Amphorae reef is home to more ancient treasure and you can swim down to see a large ceramic vase, dating back to the Neolithic period and believed to have been designed to carry wine.

For treasure of a wilder nature, head to Lasithi. Between Agios Nikolaos and Elounda is the Nikolas reef, home to loggerhead turtles. More wildlife can be spied inside Chania's underwater Elephant Cave, named after the fossilized elephant bones the lie within it. Also inside, you'll be able to spy rare monk seals. 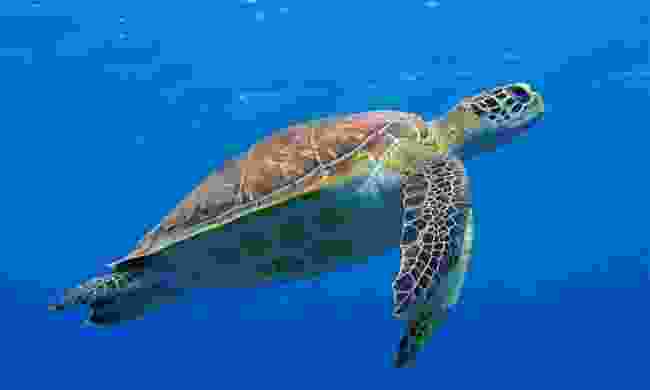 Dive with loggerhead turtles in Zákynthos

At the opposite end of the Ionian archipelago, Zákynthos has another marine park, not focused on shipwrecks, but set up primarily to protect nesting loggerhead turtles (Caretta caretta), migratory birds calling at the Strofádes islets, and a baker’s dozen of dive sites around the island’s southwestern Kerí promontory.

At remote Fáros, rare Mediterranean monk seals are sometimes spotted, while at Barrakuda you are actually as likely to see moray eels or violet aeolid, an anemone-like nudibranch. Lákka has an undersea arch just 12m down. Widespread in these waters are lurking grouper, octopus and slipper lobsters. 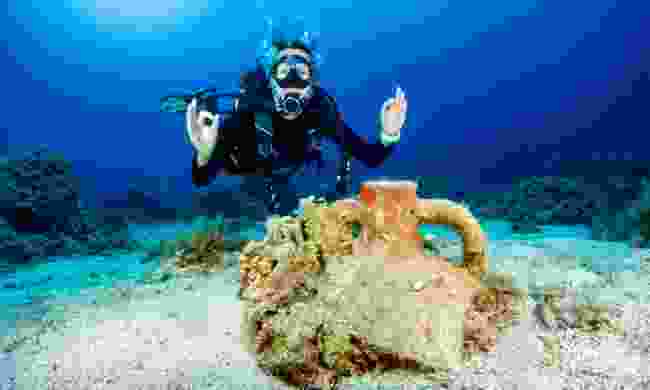 A diver examines an artefact on the seabed

Dive into the deep blue at Pavlopetri in Laconia to discover the oldest underwater town in the whole world. This sea-sponge covered town of Voies - mentioned by Pausanias in his book Lakonika has rested on the seabed since the 4th century, when an earthquake is believed to have drowned the settlement. The result is an eerie world of water-filled alleys, rusting chests filled with rocks and a carpet of shards of treaure, where you may find bits of broken pots, cooking utensils and other long fogotten day-to-day items.

Nearby Sapiéntza islet, offshore from Methóni in the southwestern Peloponnese, also has many surrounding wrecks owing to its position beside the sea-lanes between Italy and the Levant. The Sarcophagi wreck is a partilcuar highlight and you can dive down to see the intricate details of the ancient burial box up close. Even snorkellers can catch a glimpse of these, in just ten metres of water. 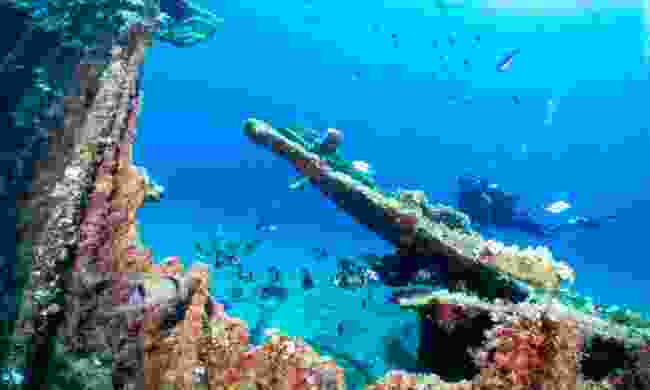 The Pagasetic Gulf offers up some otherwordly diving sites, one of which is the Faraggi gorge. Here, you can follow a dramatic wall of a rock for 40m below the surface. Look up to spy the aptly nicknamed silver rain, an illusion caused by the glint on the skin of shining shoals of saddled bream and tuna. Nearby, you'll find the twin caves. Less than 100m apart, the walls of the two caves are similarly designed with a bright pattern of sea-sponges and other vivid plantlife. The bigger cave of the two is a huge 30m wide, while the smaller one requires divers to squeeze through the gap in single file.

Close to the Pagasetic Gulf, just north of Kimi village, you'll find wildlife-teeming Prasouda reef. As well as myriad multi-coloured fish, you're likely to spy lobsters crawling along the reef and even dolphins and seals swimming by.

Cargo inside a Byzantine-era boat will be visitable at Kíkynthos islet, in the Pagasetic Gulf near Vólos. Local divers may also enjoy a late-Roman wreck at Tilégrafos Bay, and various remains at Cape Gláros, including an Archaic stone anchor. 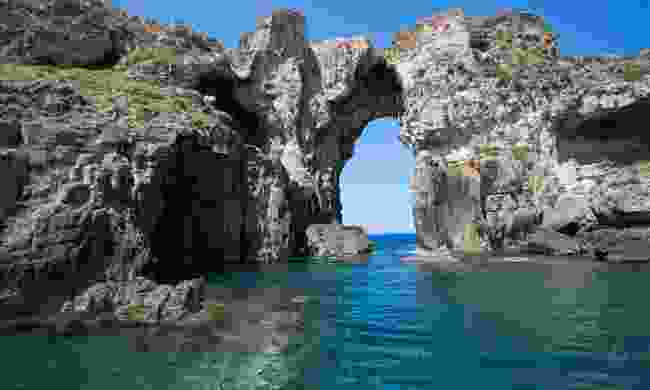 The Bay of Navarino

Just north of Sapiéntza islet, in the Bay of Navarino, another submarine park awaits exploration. This one contains three Ottoman battleships sunk by the allied British, French and Russian fleets during the 1827 battle which guaranteed Greece’s formal independence in 1830. Also submerged here since 1980 is the oil tanker Irene Serenade. Even though its keel lies 47m below the water, its deck is only half that depth, making it accessible to any diver. It is also the world's second longest visitable shipwreck at a huge 282m in length. 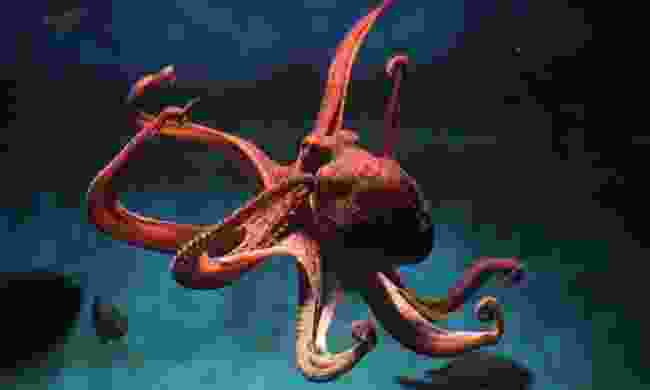 Santoríni, with its caldera most usually admired from its rim high above, offers dives at Aspronísi, whose schooling fish frequent a sheer wall, or between the Nea Kaméni islets where a sunken 1940s freighter retains cargo in the intact bow. Among the pastel-coloured sponges, you'll find a plethora of marine life, including octopus, squid, sea bream and sea horses.

Head over to Visit Greece and start planning your perfect Greek adventure now...