6 authentic experiences to have in Palma

From picnicking in the park and exploring local markets to seeking out street art and getting lost in history, here are the most authentic things to do in Palma...

There’s nothing to beat that feeling of being like an islander, visiting beloved local markets and cafés and enjoying experiences that give a wholly new perspective on city life. Discovering the authentic heart and soul of Palma is certainly a treat not to be missed... 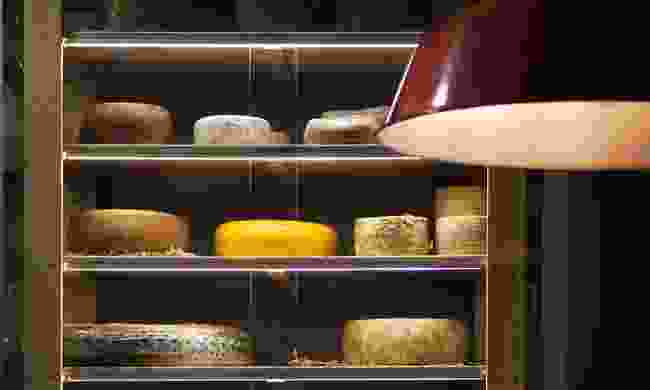 The capital is famed for its first-class gastronomy so head for an eaterie where you can sample the island’s delicacies in relaxed style. For coffee and a spiral-shaped ensaïmada (morning pastry), visit Bar Bosch on lively Plaça Rei Joan Carles and for a superb menu del día head to atmospheric Aromata with its magnificent architecture in medieval Sant Jaume district. At recently opened, contemporary-styled Andana opposite Plaça España, renowned local chef, Maca de Castro, offers savoury coca (a moreish pastry) as well as tapas and dishes with sobrassada, (the islanders’ famed paprika flavoured cured pork sausage). In most restaurants, garlicky alioli dip, olives and fresh bread are provided while pa amb oli (bread with oil), served with jamon serrano (ham) and local sheep and goat cheese, is a must. Popular tapas are given an indulgent twist at new venture, Merchants at Hotel Palacio Can Marques in La Lonja, which tempts with creamy lobster and prawn croquetas and the crispiest calamari.

2. Picnic in the park 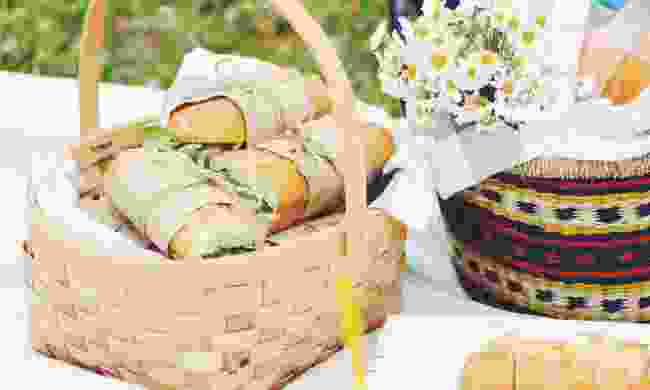 Enjoy a picnic in the park in Palma (Javier Del Álamo)

Grab a delicious coffee and slice of coca, salad or crunchy roll from Es Rebost on Avenida Jaime III in Palma Old Town, and head for one of the city’s parks. Failing that, most small grocery stores and delicatessens will rustle you up a scrumptious sandwich. Watch locals walk their dogs, play with their children, and enjoy strolls. Head for popular park, Sa Feixina in Santa Catalina district with its historic fountains, or to Parc de Mar, with its graceful lake, and gaze up at La Seu Cathedral above. A little further afield on Avenida Gabriel Roca are the hidden Jardins La Quarantena. These perfectly formed, mature gardens are unfrequented by tourists and full of meandering paths and rockeries. The large and bustling Parc de les Estacions, bang next to the bus station, is also the perfect place to observe the world go by. 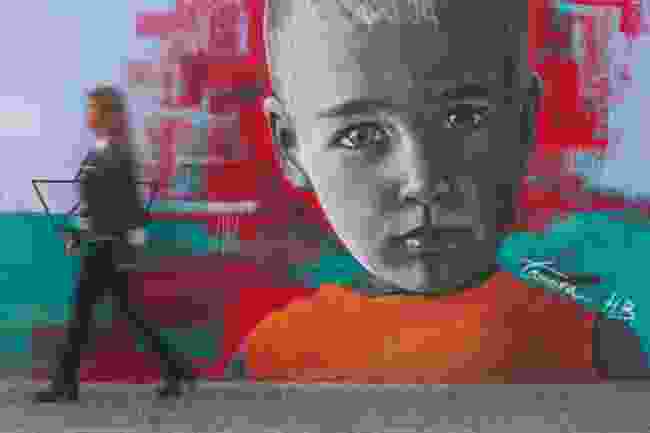 Embark on a street art walking tour in Palma (islikemint)

If you enjoy urban art, get on your comfy shoes and head for the streets. Colorful murals and posters by well-known graffiti artists abound, offering social and political comment or just potent imagery reflecting their thoughts. Out of town, is the so-called ‘Hall of Fame’, near Son Gotleu Bridge, where graffiti art has been re-invented over the years from the greats such as Budha, Shanghai and Cane to the current younger set. Nowadays, the likes of Joan Aguiló dominate, imaginatively depicting people of all ages doing everyday tasks. His works can be viewed at Park Sa Riera, close to the station or a few streets behind Santa Eulalia church at Carrer de la Vidriera 7. Consider taking a street art tour and explore works by other leading artists such as SOMA, Carolina Adán and ZON. 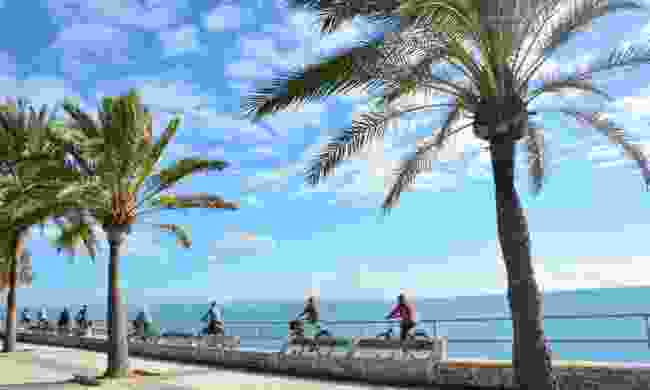 Hire a bike and take a spin along the seafront cycling path that follows the coast from east to west. Eastwards is the cosy fishing quarter of Portixol where superb fish restaurants lure like sirens. Further afield at Cala Gamba, park up and enjoy a warming coffee or the delicious catch of the day at new Mediterranean hang out, Raft 19, facing the sea. Westwards, pedal to Porto Pi and pay a visit to the lighthouse and San Carlos Military Museum, or carry on into suburb, El Terreno, and explore the Gothic, circular Bellver Castle. A few kilometres further is the Pilar and Joan Miró Art Foundation where 6,000 of the prolific artist’s works are on display. In the heart of the city, you can cycle to vibrant Santa Catalina, with its owner-occupied handcraft and fashion shops, bars and cafés. If you like patisserie, this is the place to hop off the bike and take a break.

5. Get lost in history 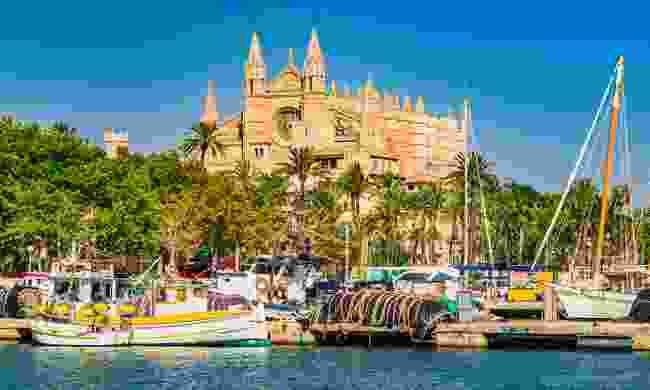 To wander the streets of Palma is a voyage of discovery, so make for Plaça Cort where you’ll find the picturesque Medieval town hall and Olivera de Cort, an ancient gnarled olive tree, believed to be more than 600 years old. Make a pit stop here and enjoy coffee and almond cake on the pretty terrace of Cappuccino Grand Café. A few steps away, is the towering Santa Eulalia church in historic Calatrava which in the 13th-century was assigned by Jaume I to the city’s Jewish population. Walk around the narrow, shady lanes and admire the ancient convents and chapels, grand townhouses with their Romeo and Juliet style balconies, and pretty public gardens. Here you’ll discover the Arab baths and ancient Covent de Santa Clara where you can ring a bell to purchase the holy sisters’ homemade biscuits. Do pop by the museum of Mallorca as it offers a fascinating insight to the island’s history.

In La Lonja district, you can peek through the gates of former seigneurial palaces to view private patios adorned with palm trees and flowers. Make a detour to the tranquil Paseo del Borne which, until the great flood of 1403, was a raging river that flowed to the sea. In the Middle Ages, it was diverted to make way for jousting tournaments. Today, you can see the canal on Paseo de Mallorca on the west side of Palma. 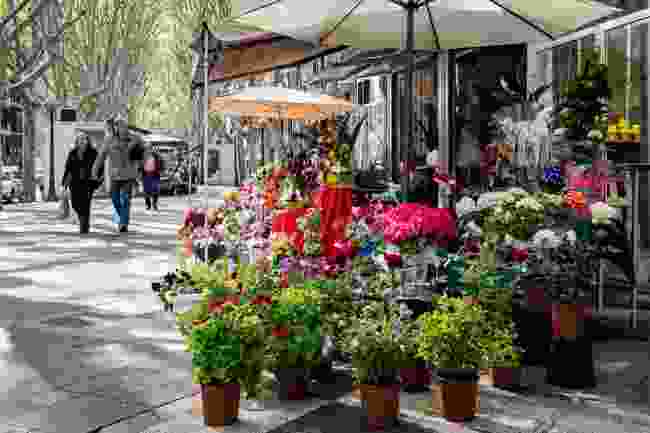 Palma’s markets are a veritable wonder. Enjoy observing daily life as locals haggle and engage in lively banter with stall holders. In trendy Santa Catalina, the market offers a wide selection of organic produce and wine, while over at historic L’Olivar market, housed on two floors, you can browse the food halls and enjoy a variety of tapas at one of the seafood stalls. Upstairs there are no-nonsense cafés where you can pay a few euros to have your own fresh cut of meat or fish grilled to eat on the premises. For vegetarians, there are hot and salty, blistered padrón peppers and hearty tumbet, prepared with aubergines, tomatoes and onions. 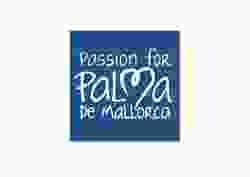