Expedition ships will whisk you to the ends of the earth and back – but what’s it actually like on board? Read on to discover 10 things you need to know before any expedition voyage to the Poles…

1. There are cruises. And then there are expedition cruises 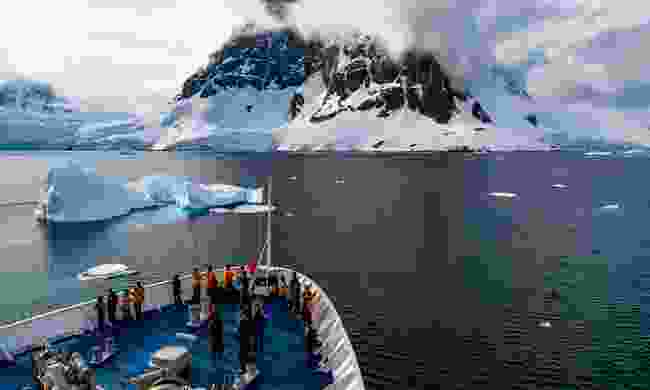 If you’re reading this and an image of a cruise ship carrying 3,500 passengers leaps to mind, think again. On a polar expedition voyage, you’ll be travelling to the ends of the earth, visiting some of the world’s most remote and pristine wildernesses – and that calls for a small expedition ship, carrying fewer than 200 passengers. Specially strengthened hulls enable them to safely navigate ice-strewn seas, whether you’re venturing south to the Antarctic Peninsula or north to Svalbard, Greenland, the Canadian Arctic or Franz Josef Land.

2. You’ll be following a legacy of polar exploration 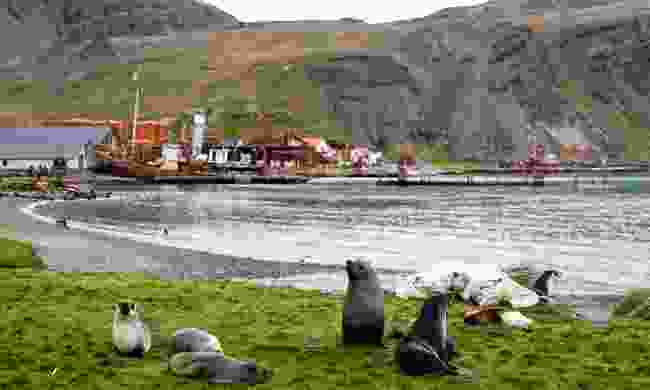 Follow in the footsteps of Shackleton at Grytviken Harbour (Nicky Souness)

Great polar explorers like Shackleton, Amundsen and Scott embody the free-spirited adventure of expedition cruising. From three-week Southern Ocean odysseys, combining the Falklands, South Georgia and Antarctica, to equally epic voyages exploring the Northwest Passage or circumnavigating Svalbard, you will be following in the wake of famous ships like the Endurance and Terra Nova. The desire to explore is as strong as ever. Unlike those often ill-fated polar expeditions of the past, however, modern-day operators rely on sophisticated navigation and ice-worthy ships, as well as seasoned captains and highly experienced expedition teams.

3. It's a wild and unscripted adventure 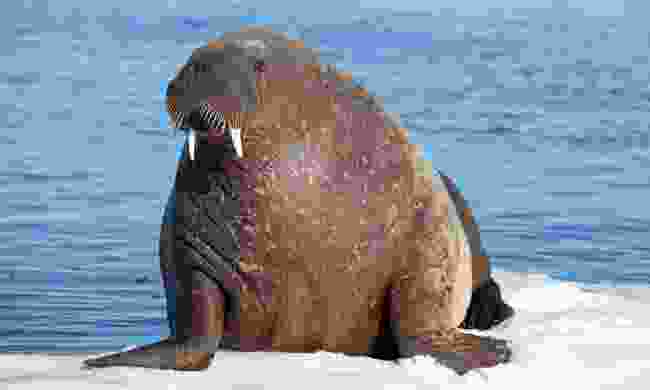 A walrus in Svalbard (Shutterstock)

The polar regions are not only remote, challenging environments, but conditions are constantly changing, season to season, day to day. You need to take your expedition itinerary with a pinch of salt. If the weather deteriorates, or sea ice is more stubborn than anticipated, your captain and expedition leader might decide to plot a different course – just as an impromptu, not-to-be-missed wildlife sighting of polar bears, walruses or penguins might influence the day’s activities or shore excursions. It’s one of the reasons why polar cruising is so exciting: you never know quite what to expect. No two voyages are the same. 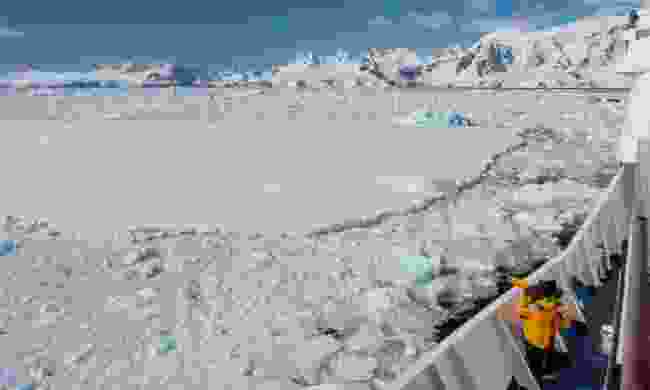 The scenery surrounding the ship is unforgettable (Cindy Miller Hopkins)

One thing is guaranteed: the landscapes of Antarctica and the Arctic will hold you quietly spellbound. On some voyages, the anticipation builds as you spend a day or two at sea before sighting the Great White Continent, the dragon-back peaks of South Georgia or the head-spinning fjords of East Greenland. Your senses fine-tune to the rarified polar soundtrack of glaciers cracking and popping, whales blowing and waders piping. There is beauty in the detail too: from the tundra patchwork of summer flowers in the Arctic to the intricate shards of blue ice glinting from deep within an ancient iceberg in Antarctica. 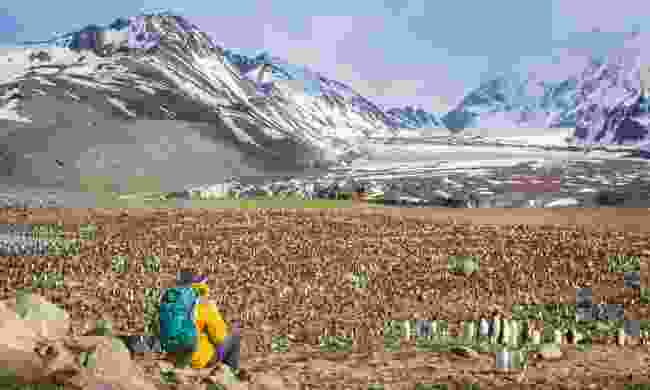 Nimble and tenacious, polar expedition ships can take you places impossible to reach in larger vessels – and that includes sensitive wildlife areas. To crouch quietly at the edge of a 100,000-strong penguin colony on the Antarctic Peninsula or watch a polar bear and her cubs patrol pack ice beneath a giant glacier in Spitsbergen are just two possible encounters rewarding travellers to these diverse environments. Other wildlife spectacles might include witnessing the quivering, blubbery mass of a walrus haul-out in the Arctic, or watching leopard seals hunting penguins in Antarctica. Both regions are also cetacean hotspots, while the birdlife is legendary – whether you’re tracking a wandering albatross scything across Southern Ocean rollers, or craning your neck at a seabird citadel of a million guillemots and little auks in the Arctic. 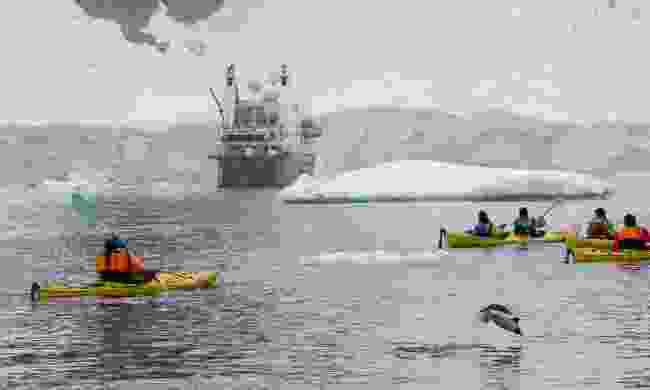 You might be content to stand at the railings of your expedition ship and simply fall under the spell of Antarctica or the Arctic. But polar voyages can also connect you intimately to the places, people and wildlife you’re visiting. Shore excursions using the ships’ inflatable Zodiacs provide opportunities to hike the tundra with an expert naturalist guide who can identify the myriad plants flowering at your feet. They can also put you in contact with local communities where you can learn about the culture of the Inuit. There are old explorers’ huts and poignant memorials to discover, mountains to scale and deserted shores to roam. Some polar voyages also offer a range of optional adventure activities, including sea kayaking, snowshoeing and even camping on ice. When planning a trip, make sure you choose an operator that offers the most off-ship adventure options to maximise your experience. 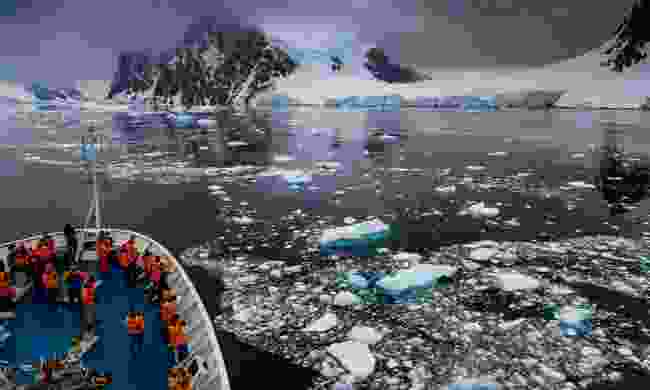 Travel in comfort on an expedition ship (Nicky Souness)

If you’re looking for 24-hour dining, a choice of swimming pools, West End shows and an onboard shopping mall, that’s the other type of cruising. But just because we’re talking about ‘expedition ships’, it doesn’t mean you’ll be roughing it. Polar ships not only have ice-strengthened hulls (capable of penetrating pack ice over 2m thick if they are dedicated ‘icebreakers’), but many also possess stabilisers for coping with rough seas. A typical vessel will have accommodation for around 80 to 200 passengers in a mixture of en suite cabins and suites. You can also expect comfortable lounges and bars with panoramic views, plus a lecture theatre where expedition staff give daily talks and presentations about the region you’re exploring. A library and fitness room exercise mind and body, while chef-prepared meals are served in the dining room (black tie not required). Some ships, like Quark Expedition’s new World Explorer, even have outdoor running tracks, spas and saunas.

8. You can still be a 'responsible traveller' 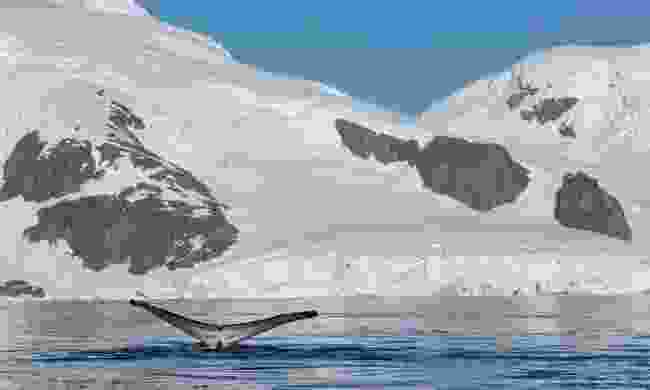 The total global fleet of ships capable of navigating polar waters and conditions is fairly small and aging fast. But responsible operators are updating their own fleets and building new ships specially designed with polar expedition travel in mind. Quark Expeditions’ newly announce Ultramarine, for example, introduces numerous innovations to minimise its environmental footprint to an extent previously unseen for a vessel of comparable size, including a sophisticated water treatment system, state-of-the-art waste handling, a leading-edge heat recovery system that recycles excess energy back into the ship, and the use of entirely recyclable materials to construct it. The dynamic positioning technology will also mean no need to anchor – avoiding damage to sensitive seabed ecosytems.

9. Your choice of tour operator really does make a difference Operating in the Earth’s most remote regions requires a skill set and experience above and beyond more traditional tour operators. Expedition ships of all sizes are specially outfitted to travel in polar waters, but smaller ships can navigate deeper into the nooks and crannies of the region. It’s also better to choose vessels that have fewer than 200 guests, as there are strict rules about how many people can go on shore at one time. You should always look for ships equipped with Zodiacs – inflatable landing crafts that allow for easy, comfortable transfers from ship to shore. However, it’s essential the ships can deploy their Zodiacs quickly – if a pod of whales surfaces, you want to get right in to the action as fast as you can. Some ships can take over an hour to deploy their Zodiacs, while others – including the new ships from Quark Expeditions, the World Explorer and Ultramarine ­– can take a matter of minutes. 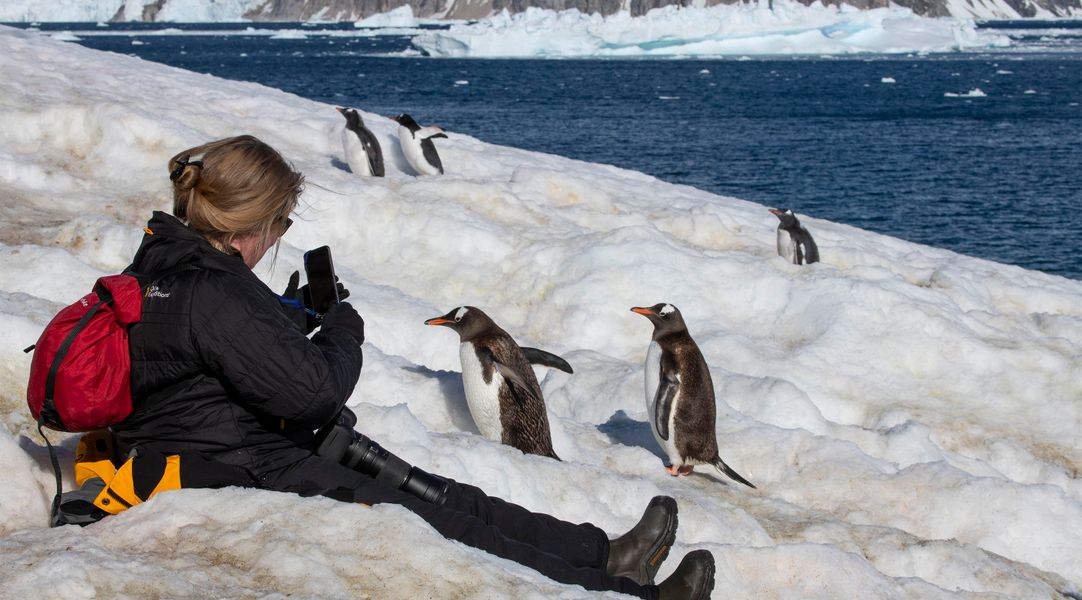 Whether you become obsessed by penguins...(Cindy Miller Hopkins) ... Or want to break through the ice to reach the North Pole (Shutterstock) Whether you become a polar pilgrim, following the footsteps of Shackleton... (Nicky Souness) ... Or return to see birds up close on the Falkland Islands (Cindy Miller Hopkins) One expedition voyage will never be enough! (Dagny Ivarsdottir)

As proper expedition ships only carry around 100 or so passengers, you’ll quickly form friendships with people who share a love for the polar regions. You almost become part of a ‘polar club’ and chances are you’ll bump into the same passengers (and crew) on future voyages. The fact is, expedition voyages can become addictive. Once you’ve sailed to Antarctica in November and seen penguins courting and laying their eggs, you’ll want to return in January to see adults feeding their chicks. As well as seasonal highlights, the polar regions also offer milestone trips, such as icebreaker voyages to the North Pole, or expeditions that set out to cross the Antarctic Circle. One thing is certain – whether you become a penguin addict or iceberg connoisseur, a modern-day explorer determined to reach 66°33'S or a polar pilgrim following in Shackleton’s footsteps on South Georgia – one expedition voyage to the ends of the earth will never be enough.

Feeling inspired to embark on a polar ship expedition?

Quark Expeditions has been a polar trailblazer since 1991. Each of their ships carries less than 200 passengers, with the greatest focus on safety and sustainability. They take you were few other people can, opening up the wildest parts of the world to travellers. Still need convincing? Read here for six very compelling reasons to travel with Quark Expeditions.