Alabaré’s Homes for Veterans are inviting you on an adventure of a lifetime: to trek 130 miles across Namibia with Ken Hames MBE to raise funds for vulnerable veterans. Here’s what you can expect...

Alabaré's Homes for Veterans have teamed up with former Special Forces Major and TV presenter Ken Hames MBE to offer you the chance to embark on an adventure of a lifetime across Namibia and raise vital funds for veterans who are homeless or in danger of becoming homeless in the process.

Sign up, and you could be joining Ken Hames and a group of world-leading trekking guides for a 13-day journey across 130 miles of Namibia.

Here's what you can expect... 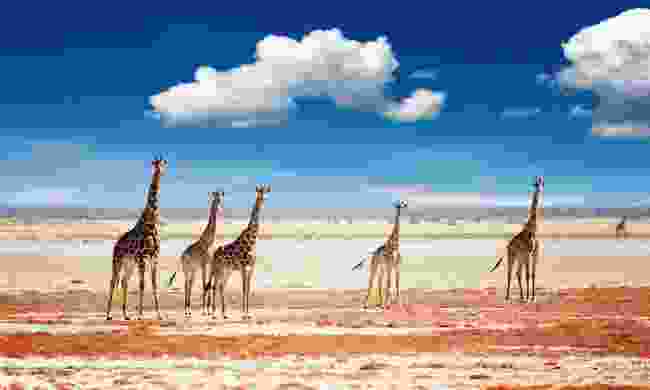 The first sighting you’re likely to see are three elephant bulls. These mighty brothers' stomping ground is the Ombonde Dry Riverbed and they are specially adapted to survive in the harsh desert environment. Remember to turn your attention skyward to see eagles sweeping across the skies above.

More gentle giants await at the Hoanib Dry Riverbed, where desert elephants fight for space on the horizon with desert giraffes. A rarer sighting are the black rhinos. Spot one of these and you’ll have the opportunity to walk up close to some of the last free roaming black rhinos on the entire planet. 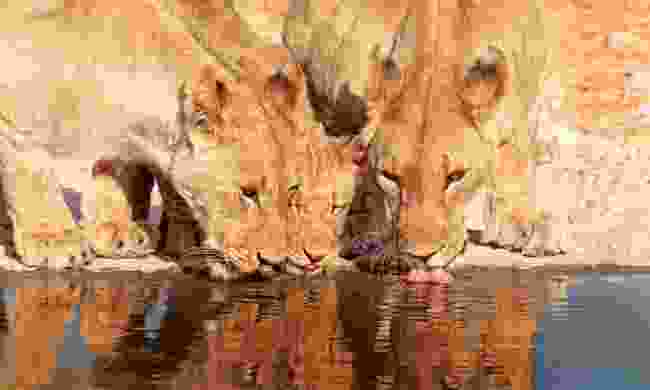 Spot lions at a watering hole in Namibia (Shutterstock)

Arguably the most memorable wildlife experience of the trip is at the ancient watering hole of Onkongwe. By night, sit still and patiently at your camp and look on in awe as lions, leopards and elephants emerge from the darkness, congregating at the watering hole for their midnight feast. It’s a sight that will likely stay with you for the rest of your life. 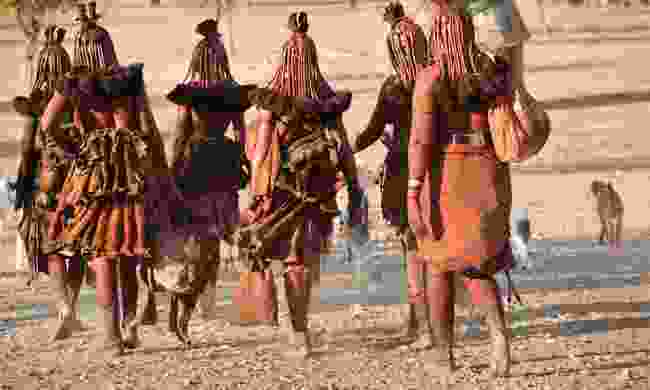 The Himba are a semi-nomadic ancient tribe who breed cows and goats, measuring their wealth by the size of their cattle herd. The Himba worship the god Mukuru by keeping an okuruwo (ancestral fire) lit. Each family has its own okuruwo, which the family's fire keeper visits around every seven days to communicate with Mukuru.

Get an insight into their culture by visiting a Himba village where you'll meet and talk to some of the members of the tribe, before being shown around their village and welcomed into their cone-shaped homes.

3. You’ll be surrounded by breathtaking scenery 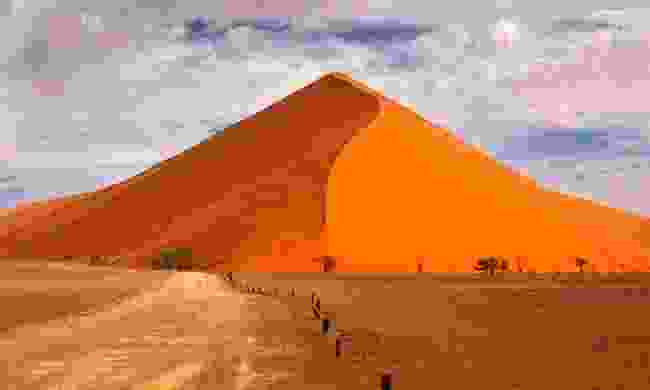 The scenery of Namibia (Shutterstock)

During your time trekking through the oldest desert in the world, you'll get to enjoy some otherwordly scenery that hasn't changed for thousands of years. You'll climb up and down tumeric-coloured sand dunes. You'll gaze up at charred tree trunks with gnarled bare arms outstretched under flawless blue sky.

You'll stand on the dusty cliffs overlooking Khowarib gorge with views over a trickle of a dark stream surrounded by vivid greenery spanning the floor below you. Nearby, you'll stand at the foot of a crashing and mist-spraying waterfall. Later, you'll discover ancient settlements abandoned by past civilisations half buried in the sandy slopes at Amspoort.

The trek ends on a high, at the top of the Hoarasub Gorge where you'll look down on the giant mounds of rock breaking through a carpet of cracked mud and lime-green bushes, before embarking on a secret scenic route near Mars-like Purros. Needless to say, the contrasting and spectacular scenery you'll pass on this trek will likely remain imprinted on your minds-eye forever.

4. You’ll camp out under the stars 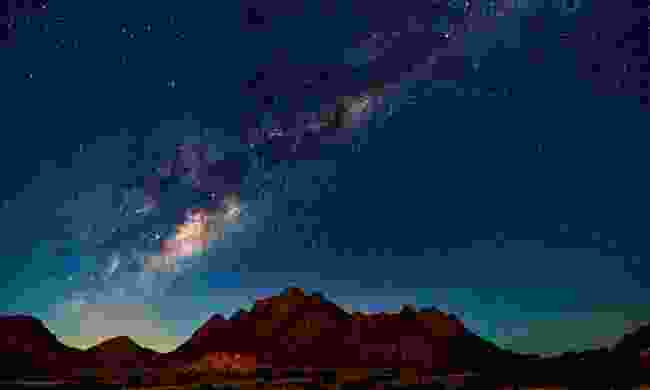 Camp out under the stars in Namibia (Shutterstock)

After a long day of trekking, imagine climbing into your sleeping bag and lying down with only a ground sheet separating you from the desert sands, staring up at a night sky studded by millions of winking and glinting silver stars.

With a fire flickering in the centre of the group and dogs on guard to keep wild animals away, you're in for a peaceful and memorable night's sleep under the spectacular night sky above Namibia that seems to go on forever.

5. You’ll be in very safe hands 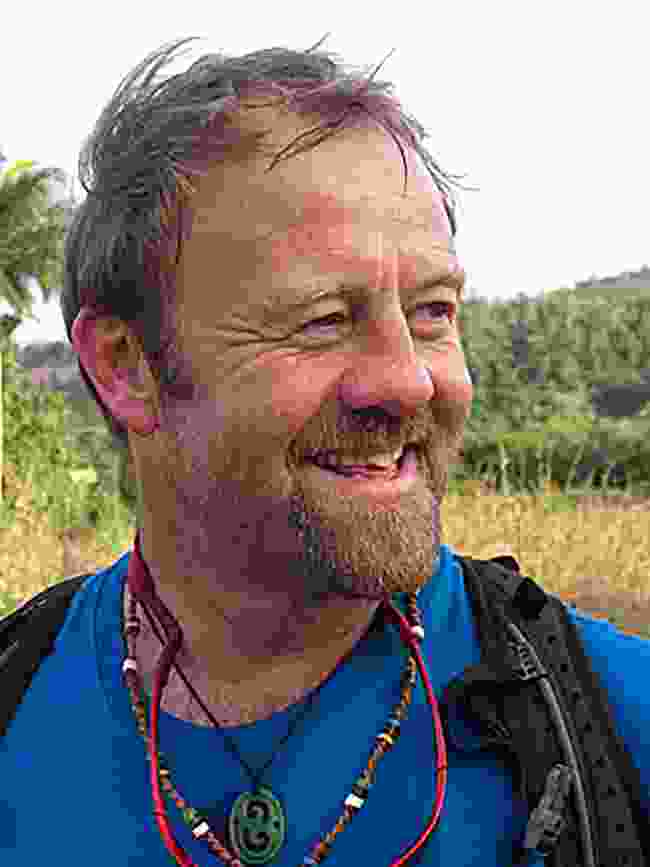 “I have led six major expeditions to Namibia & know this beautiful country well. This trek offers a unique opportunity to meet tribal people and see animals in their natural habitat.

To see a desert elephant amid this stunning scenery is truly awesome, as is watching giraffe wander amongst the sand dunes and rock outcrops. In some areas you can walk close to black rhino, the last roaming free on this planet.

This is an incredible chance to experience an extraordinary country. I am so looking forward to you joining me & raising much needed funds to help homeless and vulnerable Veterans.”

Former Special Forces Major, Ken Hames MBE, will be leading this trek. With sixteen years experience of serving in the SAS and a real passion for the great outdoors, you'll be in very safe hands. Ken has led more than 20 major expeditions to all corners of the world and is an expert on African wildlife and bush craft skills. Some of Ken's expeditions have featured on BBC 2 and he is renowned as one of the world's greatest explorers. You can be sure of an inspiring leader eager to show you this beautiful and wild country.

With Ken leading the charge, alongside a group of some of the best trek leaders in the world, you'll have the professional support and safety net you'll need around you and Ken's knowledge will give you a real insight into Namibia's terrain, wildlife and history.

6. You’ll be supporting a good cause

Alabaré's Homes for Veterans have organised this epic trek in an effort to raise vital funds to provide supported accommodation to Armed Forces veterans who are homeless or at risk of becoming homeless. By signing up to this trek, not only will you be embarking on a trip of a lifetime, but you'll be raising much needed money to ensure ex-service personnel have a roof over their head.

Every night, Alabaré provides beds for 115 veterans. Over the past year they have helped more than 320 veterans off the streets. As well as this, Alabaré provide veterans with the support they need to focus on their future, learn vital life skills and move onto independent living.

By signing up for the trek, you can help Alabaré provide help for many more vulnerable veterans. 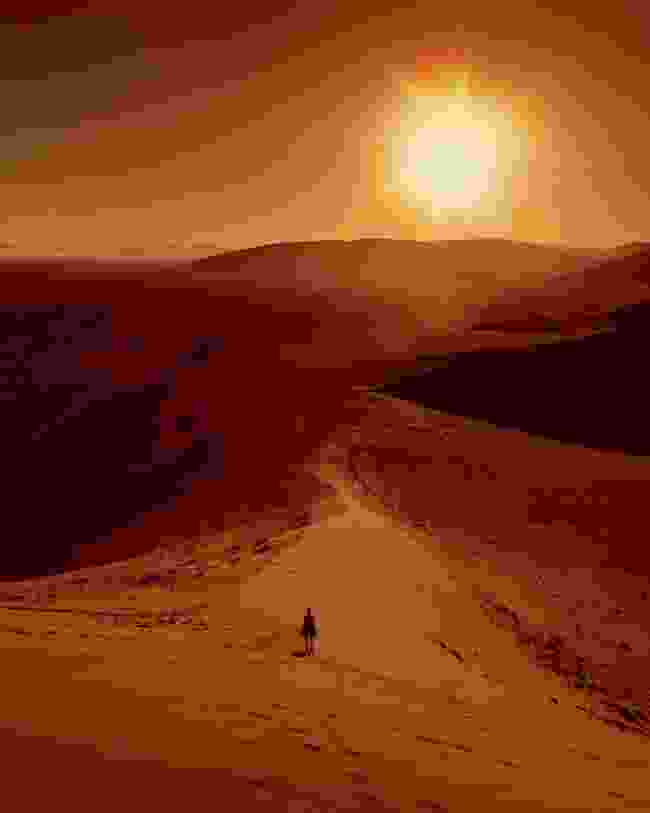 You can sign up here but be quick. Places are extremely limited and will be sold on a first come first served basis.

When is the trek?

How long is the trek?

During the trek, you will cover 130 miles and it will take just over 13 days.

The trek includes a training weekend at the Brecon Beacons from 15-17th May 2020 which is included in the price.

How much do I need to raise?

The cost of the trek is £3,500 and Alabaré is asking everyone to raise as much as they can, with a suggested minimum of £1,000.