Discover the mountainous valleys, rural villages and culinary delights in Hokuriku, along the first half of the Mitsuboshi Kaidou drive...

What is the Mitsuboshi Kaidou?

The Mitsuboshi Kaidou is a 200km stretch of road in the Hokuriku, Hida and Shinshu region of Japan – an area known for its rugged mountains and rural farmland, speckled with historic cities. The road literally translates as ‘three-star road’ (mitsu = three/ boshi = star/ Kaidou = highway/road), and the road connects five ‘three-Michelin-star’ sites, as introduced in the Michelin Green Guide Japan.

The Mitsuboshi Kaidou route begins in the far western city of Kanzawa (sometimes called ‘little Kyoto’), passing through the iconic regions of Gokayama, Shirakawa-go and Takayama, before reaching an end in the city of Matsumoto – a three-hour drive east of Tokyo. It’s a route famed for its multiple UNESCO Heritage sites, as well as some of Japan’s most beautiful scenery.

Read on for eight travel highlights between Kanazawa and Shirakawa-go – the first 70km stretch. Or learn about the second half of the route here.

The first stretch: From Kanazawa to Shirakawa-go

Driving between Kanazawa and Shirakawa-go takes a little over an hour, but you could spend days traversing this 70km stretch. If you’re visiting in the warmer months, it’s best to explore by car so you can dip in and out of the historic villages and stop to admire the view: rolling mountains descend into lime-green valleys, where wildflowers cling to riversides.

Of course, the landscape changes with the season. The lush green of spring and summer changes to the fiery red of autumn, before a blanket of snow arrives in winter and turns everything white. Whichever time of year you choose to visit, there’s always plenty to see and do. Start your visit in Kanazawa – a two-and-a-half-hour Shinkansen train ride from Tokyo – and head off towards Shirakawa-go from there.

Here, we share 7 highlights between these two historic spots… 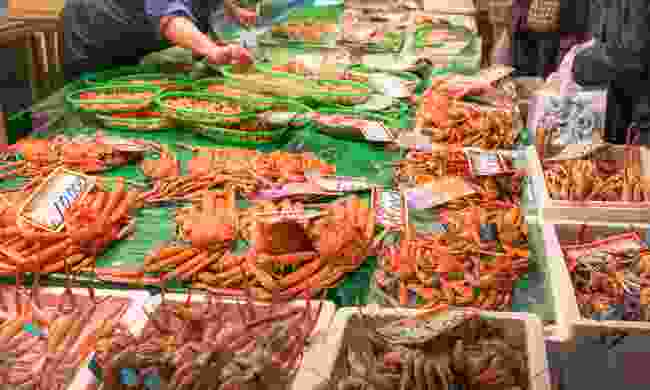 During World War Two, the city of Kanazawa managed to escape air raid destruction – the second largest city in Japan to do so, after Kyoto. As such, parts of the old town, including the samurai district, Geisha entertainment areas and working markets, have managed to survive in good condition.

One such market is Omi-cho – a colourful, chaotic network of covered stalls dating back around 300 years. The market features over 170 stands selling everything from fresh-caught seafood to local mountain vegetables, while also housing a number of excellent sushi restaurants and sake stores. It’s best to visit in the morning, when produce is fresh. Many shops sell rice bowls topped with the catch-of-the-day – a great breakfast treat. 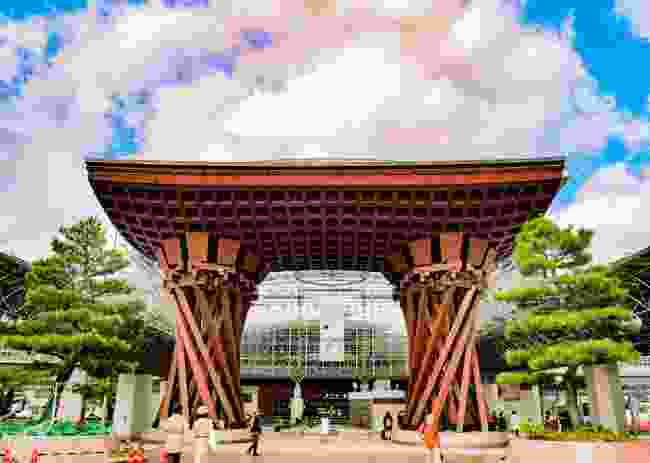 Pay a visit to ‘Tsuzumi-mon Gate’ – an enormous twisting red gate, named because of its resemblance to the eponymous Japanese musical instrument, typically used as a drum in Noh Theatre. The gate has become the new symbol of the city and an iconic photo spot among visitors, located near the market, just outside Kanazawa train station. 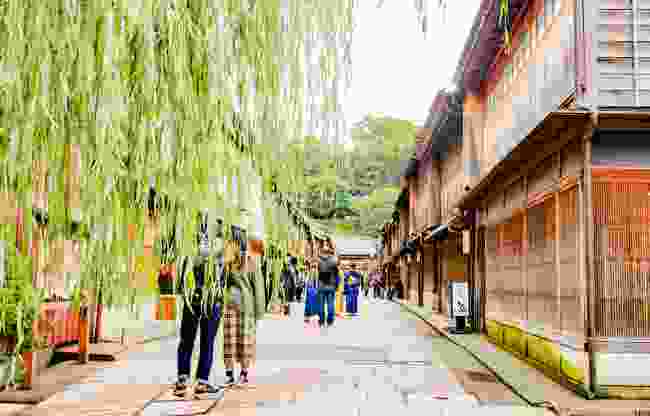 Higashi Chaya is one of three ‘chaya’ districts in Kanazawa City – areas where Geisha used to entertain guests with musical performance and dances. Today, the district still resembles that of a traditional Edo-period village, where wooden buildings line cobbled streets, lit by the soft glow of lanterns at night.

While externally the buildings still look as they always have done, internally many of them now focus on one of Kanazawa’s other specialities: gold leaf. Roughly 98% of all gold leaf made in Japan comes from Kanazawa – a history dating back 400 years. One of the buildings has been been decked inside out with gold leaf, while others – such as Bikazari Asano (located at 1-8-3 Higashiyama) – offer gold leaf experiences, where you can try this traditional craft for yourself. 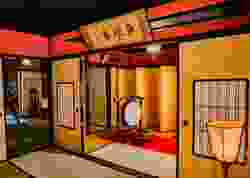 As you explore the Higashi Chaya district, stop for a traditional tea set at Ochaya SHIMA (1-13-21 Higashiyama). It’s one of a few chaya (Geisha houses) that still remains from the Edo period, dating back to 1820. The interiors still look much as they did when the house was first built, with lacquered wooden surfaces and tatami mats. You can try matcha and a ‘traditional sweet’ as you sit facing the inner green courtyard garden. 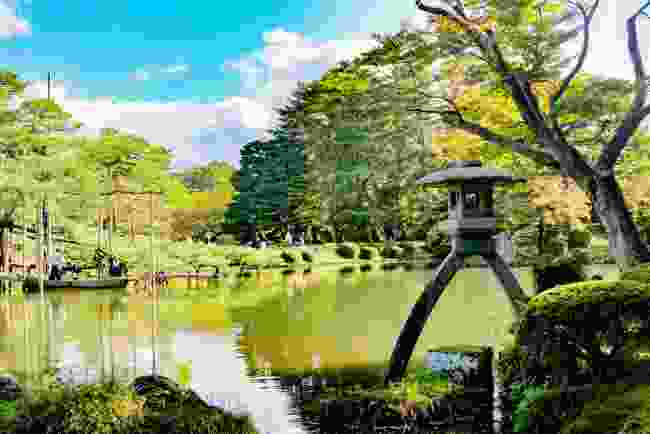 Kenrokuen Garden is considered to be one of the three most beautiful gardens in Japan, where stone bridges arch over reflective ponds, surrounded by maple and cherry blossom trees. It was designed using various seasonal plants to look pretty in every season, although many say winter is one of the best times to visit to see the art of ‘yukitsuri’: a technique of preserving snow-laden trees with tall bamboo poles and rope.

The garden was constructed over the course of 200 years by the ruling Maeda family of the Edo period, before being opened to the public in 1871. It stands beside Kanazawa Castle, which was once the home of the same Maeda family. Since the castle’s construction in 1583, it has burnt down multiple times, and has also been used as both the base for the Japanese Army and as a campus of Kanazawa University. In the 90s though, a project began to restore the castle to its former glory, returning it to the impressive structure you see today. 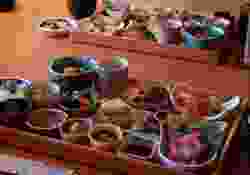 Stop for lunch at Shogyo Tei (3-4-45 Kannonmachi), around a 20-minute walk from Kenrokuen Garden. The restaurant specialises in ‘ayaka-gozen’, a set meal with a variety of small dishes featuring seasonal, local ingredients. It also has great views of the city. 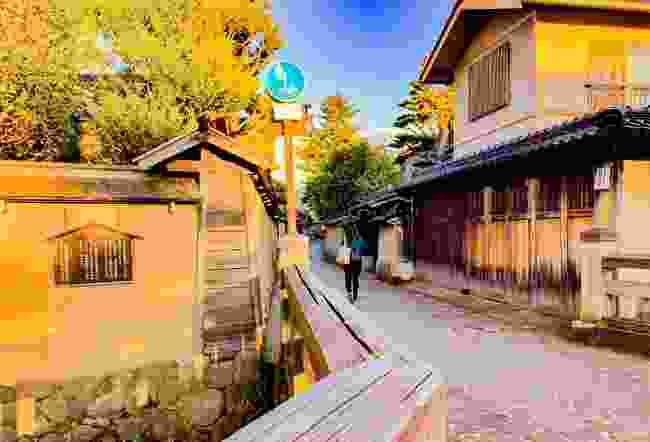 Nagamachi, once the home of Kanazawa’s samurai, stands at the foot of Kanazawa Castle. The samurai’s earthen-walled houses lining the narrow cobbled streets have stood the test of time. You can look inside one of the more famous homes in the region (Nomura-ke, located at 1-3-32 Nagamachi), which has been meticulously restored to show what a wealthy samurai residence was like. It once belonged to the Nomura Family, who were particularly prosperous during the Edo Period for serving Lord Maeda directly. 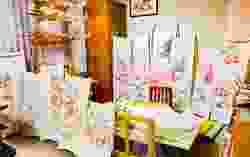 In Nagamachi, you’ll also find Nagamachi Yuzen Kan (2-6-16 Nagamachi) – one of the only studio open to the public that practices the traditional silk dyeing process of ‘kaga yuzen’. This technique was once used to paint the silk of kimonos, an artform you can try for yourself on a smaller piece of fabric, which the shop can frame for you to take home.

5. Visit the UNESCO village of Ainokura in Gokayama 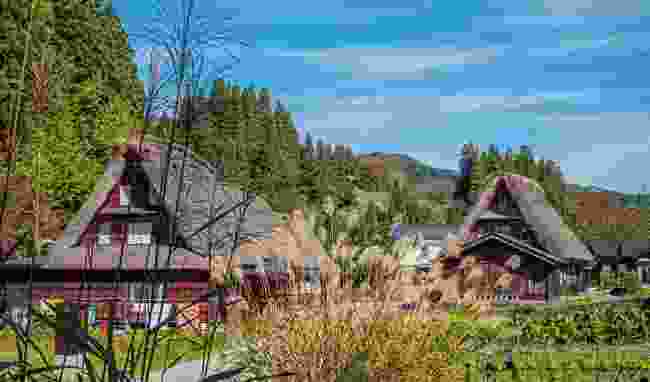 Visit the UNESCO village of Ainokura

Less than an hour’s drive from Kanazawa lies the region of Gokayama, home to 40 tiny villages hidden among the rice fields and sloping mountains. One of the most beautiful (and remote) of the villages is Ainokura, which holds UNESCO status for its 20 traditional sloping-roof farm houses known as gassho-zukuri.

These houses date back to the 17th century and, aside from a few renovations, appear largely unchanged – their tall peaked roofs designed to withstand the large amounts of heavy snow that falls in the region during winter. It’s easy to imagine you’re back in Edo Period Japan as you walk through the quiet village – often shrouded in mist from the neighbouring mountains. Many of the small thatched homes remain private residences, owned by the farmers who work the surrounding rice fields 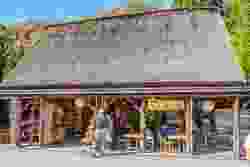 Have lunch at 100-year-old Matsuya (445 Ainokura) – a restaurant in one of the traditional farmhouses, at the heart of Ainokura village. They serve delicious set menus of soba and tempura, with house-made tofu and crunchy sansai (Japanese mountain vegetables).

6. Spend a day at Shirakawa Village 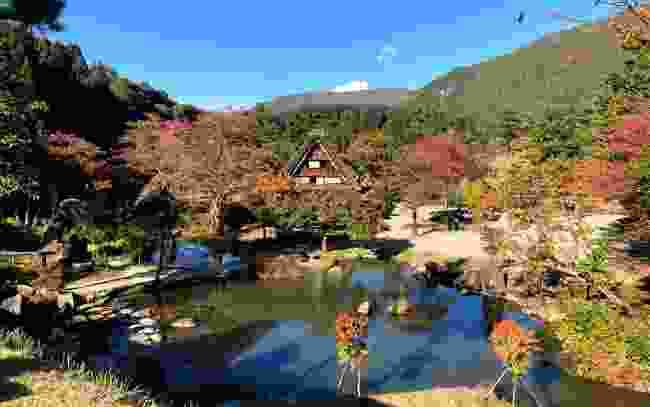 Spend a day at Shirakawa-Go

The image of Shirakawa Village – surrounded by green fields in spring and snow in winter – is among the most iconic images of Japan. This UNESCO village, tucked into the folds of Gifu’s mountains, is the best-known example of gassho-zukuri style – the same peaked thatched roofs of Ainokura village mentioned above.

Gassho-zukuri literally means ‘constructed like hands in prayer', named because the roofs resemble the hands of Buddhist monks pressed together in prayer. Although this style can be found in other parts of Japan, Shirakawa Village is the most famous example. Because these villages were so cut off from the rest of Japan due to the heavy snow in winter, there are a large number of practices that are entirely unique to the area, from farming techniques to cultural dance and music. 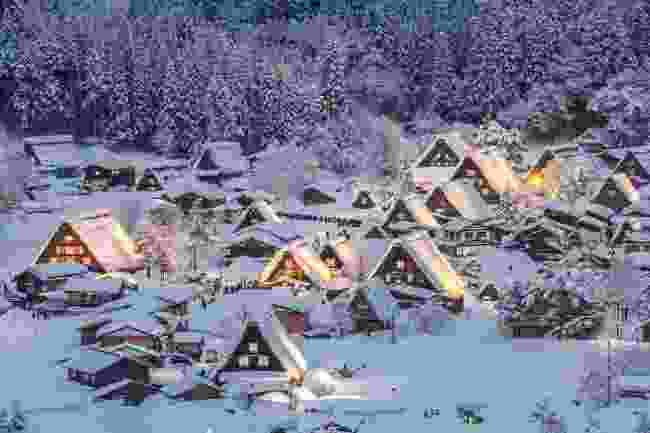 In winter, the village hosts a light-up festival, where many of the homes glow in the white snow. Though it gets busy at this time of year, seeing the tiny windows shine beneath the snow-laden roofs is among the most picturesque sights in all of Japan. 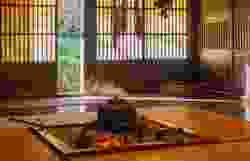 Spend a night in the village, sleeping in one of the traditional gassho-style farmhouses. You’ll typically sleep on futons on a tatami mat, with a home-made breakfast and dinner included. It’s a wonderful way to experience local hospitality, though reservations need to be made well in advance as it’s become popular among Japanese and international visitors alike. 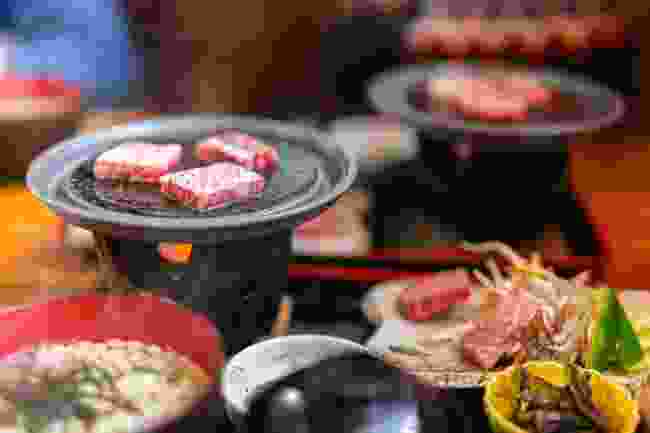 The areas along the Mitsuboshi Kaidou are home to an abundance of local dishes: tempura mountain vegetables, ara jiru fish bone soup, sticky slow-cooked sukiyaki stew, hand-stretched soba noodles and more. One of the most revered foods in the region though is Hida beef – from cattle that are raised on the clean air and pristine water in the shadows of Japan’s Northern Alps.

When it comes to Wagyu in Japan, it doesn’t get much better than Hida. Wagyu (which literally translates as ‘Japanese beef’) has a grading system to determine the best cuts and varieties: A-C is used to rank the amount of meat, and 1-5 refers to its quality (how marbled, textured and coloured it is). Hida beef typically has a rating of A5 – the finest of all Japanese beef. While you’re in the area, make sure you enjoy this local delicacy. Most restaurants and izakayas in the area offer Hida beef on their menus.

Find out more about the Mitsuboshi Kaidou on the official website.