Culture, history, adventure, nature: there’s something for everyone along Japan’s epic Diamond Route...

Japan is a country of epic proportions: enormous sprawling cities, rolling mountains, vast forests and long, golden coastlines. Nowhere is this truer than the Diamond Route – a road trip that links the vast prefectures of Fukushima, Tochigi and Ibaraki in Japan’s north-east.

This new route was formed in the last few years, cutting through some of Japan’s most beautiful countryside, including the vivid lakes of Mount Bandai, the alpine landscapes of Oze National Park, and the temple-filled forests of Nikko. You could tackle it all by car or use Japan’s well-connected public transport to complete shorter stretches.

No matter how you choose to explore, there’s something for every kind of traveller – whether you’re looking for culture, history, nature or adventure. Here we share nine of our favourite highlights from the epic Diamond Route… 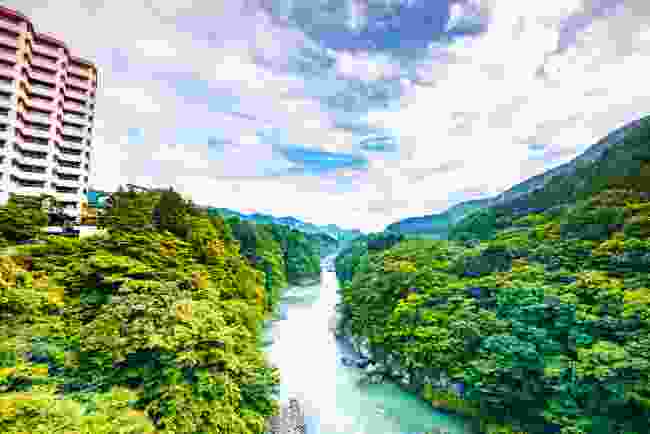 Kinugawa Onsen is known across Japan for its warm, inviting waters. This hot spring resort town lines the banks of Kinugawa River – located near the popular town of Nikko, famed for its lavish temples dripping in gold. Kinugawa’s water has long been appreciated for its clear, mild properties, used in hot spring bath houses since the Edo period (1603-1867).

The best way to experience the hot spring culture is to spend the night in a ryokan – a traditional Japanese inn where you tuck up on a futon in your tatami room. Most of the ryokans have rotenburo (open-air baths) so you can soak in the cool mountain breeze overlooking the Kinugawa River.

If you don’t plan to spend the night, several of the ryokans also open their baths to non-staying guests during the day. Or, for a quick dip, there are free ashiyu (hot spring foot baths) that can be found around town. Simply roll up your trousers, stick your feet in and relax.

2. Eat your way through Ouchijuku 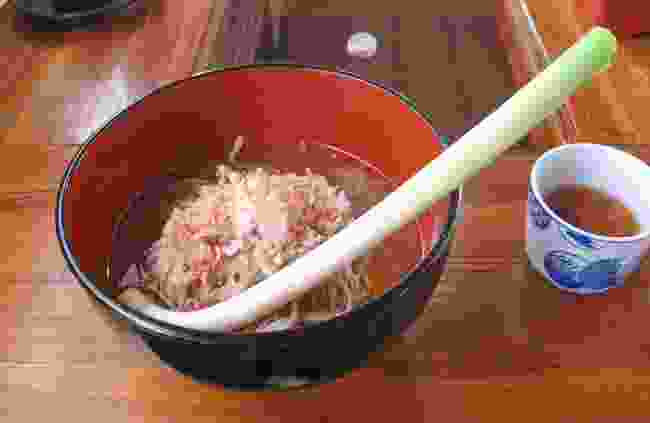 Ouchijuku is a former Edo Period post town in Fukushima, once used to connect the trade destinations of Aizu and Nikko. Travellers would make the journey on foot, stopping in Ouchijuku to eat, rest and refuel. Today, the town has been restored to look just as it did back then, with Japanese pampas grass thatching on the shophouses and unpaved sandy streets. Cedar trees circle the perimeter, backed by deep green mountains in the distance.

When you visit Ouchijuku, do as the Edo travellers once did: eat, relax and eat some more. The town is especially known for its handmade ‘negi soba’ noodles, where – instead of chopsticks – you’re given a leek to use as cutlery. This unusual dish supposedly came about because chopsticks were considered a bad omen at auspicious occasions (as a pair, they were easily divisible, which symbolised separation). Instead, a single fat leek was used to scoop up the noodles – and the tradition stuck. You can find the dish in soba houses across the town, alongside Ouchijuku’s other culinary treat: the locally-caught char fish, roasted on sticks on a sunken open fire. 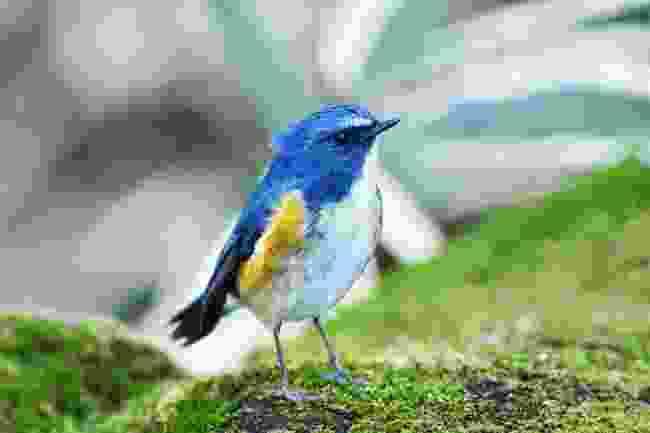 Look out for the red-flanked bluetail (Shutterstock)

The 230-acre site of Igashira Park in Tochigi is beautiful no matter what time of year you visit. The lush wooded park, centred around a lake, rolls with the seasons: transforming from green, to orange to white. You can take a rowing boat out on the lake, or pick up one of the gentle walking trails that zig-zag through the trees.

It’s a great spot for birdwatching, where you can see the likes of Japanese tit, red-flanked bluetail, the Japanese woodpecker and the warbling white-eye. Find the wooden bird watching house (called a torimi-tei) towards the south of the lake and settle in for the day. From November to March, you can also observe flocks of water birds arriving from Siberia and Russia.

4. Even more birdwatching in Ibaraki 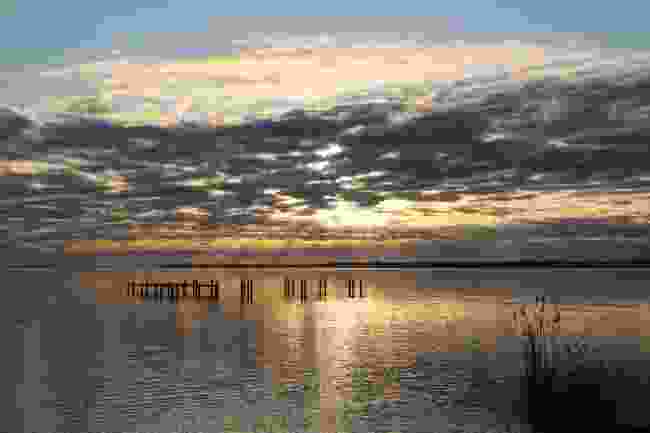 For a country made up of 70% mountain, Ibaraki Prefecture is unusual for being largely flat. Instead of mountains, you’ll find rice fields along the banks of the Tone River, beautiful golden coastlines and large wet marshlands.

For birdwatchers, the protected area of Ukishima marsh is a good place to start. In winter, harriers fly in to roost in the afternoon. In late spring and early summer, it’s a good spot to watch for marsh grassbird and Japanese reed bunting. You’ll also find shorebirds in the lotus fields and rice paddies, typically in beautiful summer plumage during the spring migration series.

For another popular birdwatching spot, the Nishinosu Reclamation Area, beside Kasumigaura Lake (the second largest lake in Japan) is abundant with wildlife. Large numbers of waterfowl can be observed here, as well as Bewick’s swans, little egrets and sharp-tailed sandpipers.

5. Explore the nature trail around Goshikinuma 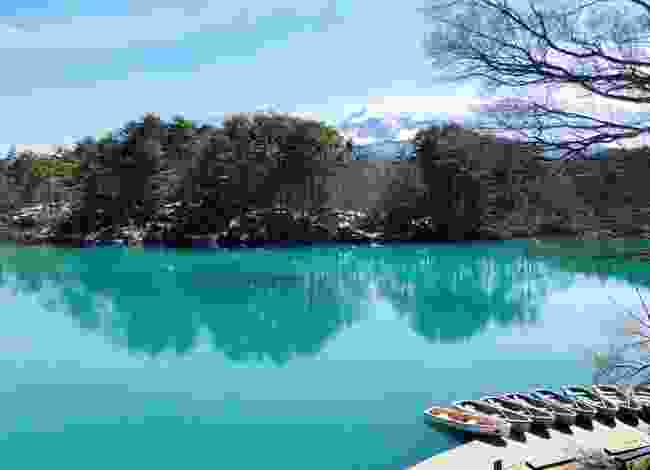 In western Fukushima, you’ll find Mount Bandai – a volcano that exploded in a colossal eruption in 1888, transforming the surrounding land to create over 300 smaller lakes and marshes around it. This is the home of Goshikinuma, a collection of five unusually vivid lakes that change colour depending on the time of day and season, from bright cobalts to fluorescent greens – a result of rare mineral deposits that seeped in after Bandai’s eruption.

There’s a scenic nature trail that guides you past the ethereal ponds. It’s an easy walk, only 3.6km in length, but you’ll be able to experience the Diamond Route’s nature at its best. Spot birds on the shores, watch dragonflies flit on the water’s edge, and soak in the incredible colours reflecting in the glassy ponds. You can also hop in a rowing boat on the largest of the five ponds, Bishamonnuma, to take in the woodland from a different angle. 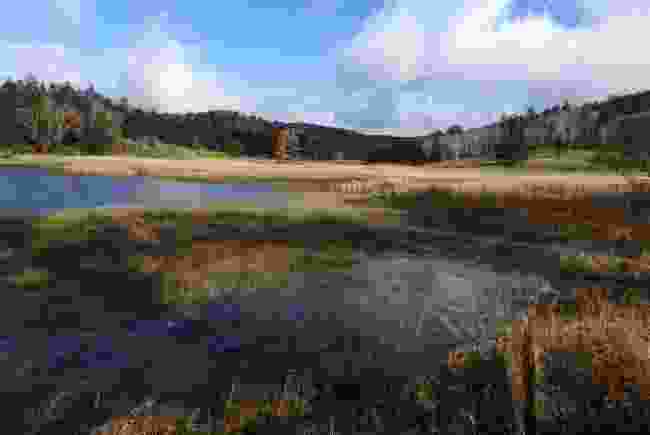 Oze National Park is one of Japan’s top hiking destinations, known for its spectacular bloomage of ‘skunk cabbages’ in spring, and autumnal foliage as summer comes to an end. In summer, yellow lilies bloom in the swamps, covering the land in a blanket of gold. It’s a beautiful time to visit, admiring the flowers beneath the snow-tipped mountains of Shibutsusan and Hiuchigatake.

There are countless hiking trails, though the route through the Ozeghara Marshland is one of the most popular, located about 1,400m above sea level. The trails are very well maintained, with elevated boardwalks that pass over the marshes and around Ozenuma Pond. Hiking from the Hatomachitoge trailhead (a popular starting point) to the Oshimizu trailhead (via the marshland and pond) can be done in around six hours.

7. Explore the trails around Ura Bandai 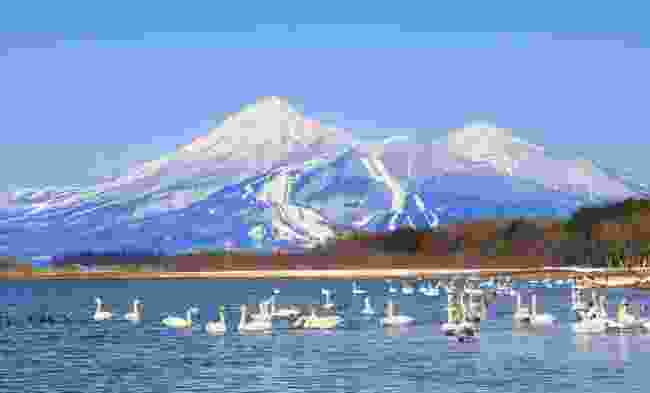 Urabandai, also known as the Bandai Highlands, lies in the highlands north of Fukushima’s Mount Bandai (Urabandai literally translates as ‘behind Bandai’). It’s an excellent hiking spot from spring to autumn, though many say October is the best time in order to see the maple trees glow the colour of fire.

Climbing the summit of Mount Bandai is one of the most popular treks in the area. You could tackle the route from Urabandai, though it’s an eight-hour round trip. Far easier is the two-hour hike from the Happodai Trailhead, beginning in the forest before a sharp 30-minute ascent at the end. If you’re lucky, you might witness ‘unkai’ from Bandai’s peak, where the clouds roll in to form a dreamy ocean below.

Another popular hiking route in Urabandai leads along the shores of Lake Hibara, the largest lake in the highlands. When you get tired, stop off at Urabandai resort town, where you’ll find onsen, ryokans and plenty of delicious food to eat. 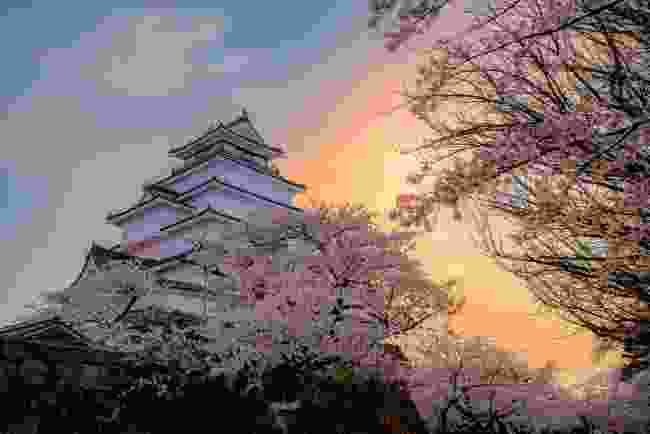 Aizuwakamatsu castle (Tsurugajo Castle) is the only castle in Japan today with a red-tile roof – reverted from grey to its original colour during a renovation in 2011. The castle was first built in 1384, though it’s been destroyed and changed hands a few times during its turbulent history. It did withstand a brutal one-month battle during the Boshin Civil War of 1868 to 1869, before being sadly demolished by the new government in 1874.

The castle is surrounded by a manicured park, filled with cherry trees that bloom pink every April. You can stop for tea in Rinkaku Teahouse, once the site of tea ceremonies for feudal lords, or climb to the castle’s top floor to look out on the surrounding city. You’ll also find Fukushima Prefectural Museum nearby – home to 3,800 paintings – and Aizu Sake Museum, a working brewery where you can learn the history of sake production in Fukushima. 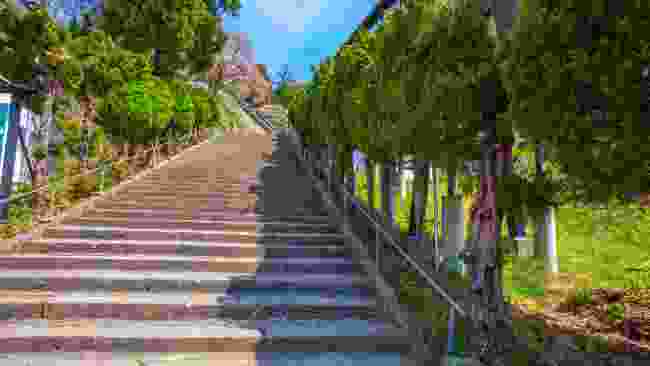 Japan is full of tragic and heroic battle tales – but none so sad as the story of Byakkotai (the White Tiger Brigade). In 1868, as the Boshin Civil War raged on, 19 young warriors committed ritual suicide on the hilltop of Mt Iimori, upon seeing what they thought was Tsuruga Castle burning down.

Tragically, they had mistaken a fire in the town for the fall of the castle, which remained strong throughout the battle. One man survived the attempted suicide and immortalized the story – which has now made it into literature and film. Even Mussolini, the Italian Dictator, was moved by the story, donating a column from Pompeii as a display of admiration in 1928.

You can learn more about Byakkotai in the two museums that stand at the foot of Mt. Iimori. You can also walk to the top of the mountain (which is more of a small hill) via the 183-step trail – or just ride the travelator up. From the top, you can take in sweeping views of the former castle town of Aizuwakamatsu and the red tiles of Tsuruga Castle.

See what other incredible travel experiences await along the Diamond Route by heading over to the official Diamond Route website.