Animals are everywhere in Australia – generally bouncing, pouncing, climbing or looking preposterously cute. And this itinerary makes the most of the country’s furred, flippered and feathered inhabitants. Start by heading south from Adelaide to the beaches and wineries of the Fleurieu Peninsula. The surf breaks at Moana Beach are well suited to beginners, should you fancy a lesson, while delicious McLaren Vale red wines provide a fine way to unwind afterwards.

Next, take the 45-minute ferry ride over to Kangaroo Island. There’s nowhere else quite like it Down Under. Often referred to as Australia’s answer to the Galápagos, the country’s third-largest island is positively crawling with fauna, and national parks and conservation zones account for over 30% of the land area. As well as the eponymous ’roos, notable residents include koalas, echidnas, possums, cockatoos and platypuses. The wildlife-spotting continues along the island’s coastline: Penneshaw is home to tammar wallabies, Seal Bay hosts hundreds of sea lions and, if you’re here between May and September, Hanson Bay offers chances to spot southern right whales cruising off shore. 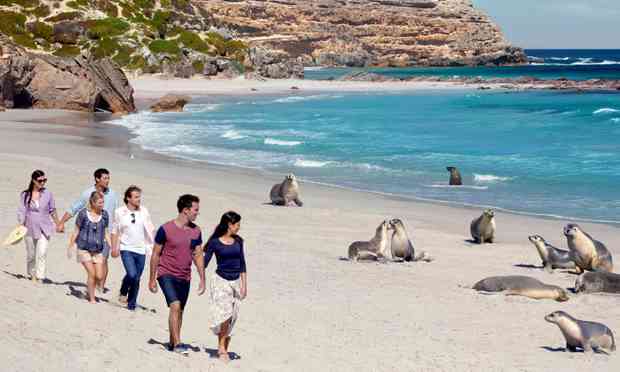 Back on the mainland, head east through Victor Harbor (another renowned spot for whales) before joining up with the Princes Highway, which rolls out along the scenic coastline towards the state border with Victoria. This area is called the Limestone Coast, and for road-trippers it lays on a rich mix of caves, cliff s and cellar doors. Be sure to call in at Port Macdonnell for a rock lobster dinner. Should you wish to keep driving past the state border, Melbourne is around five hours away.