Hit the open road in Australia's Northern Territory for the best in road trips, quirky pubs and vast open landscapes

Named after John McDouall Stuart, the tireless Scot who became the first to lead an expedition from Australia’s south coast to its north, the seemingly endless Stuart Highway bisects the entire country; from Katherine, the distance to Alice Springs is around 737 miles. Ploughing down the long, straight road makes for a more varied experience than you might think. It’s flat, arid dingo territory – but there are several diverting stop-offs.

The first of these is Mataranka. This tiny town was the setting for Jeannie Gunn’s classic 1908 novel We Of The Never Never, and still has an old-world feel – not to mention some limb-soothing hot springs. Soak in the warm, minty-blue waters of Elsey National Park to the east of town before driving on to Daly Waters. Once the site of Australia’s first international airstrip (Qantas used to refuel here), the highlight here today is the eccentric Daly Waters Pub. Decorated with bras left by previous customers – yes, really – it draws roadtrippers in droves thanks to its nightly beef ’n’ barra barbecue. There’s camping on site.

Tennant Creek, a five-hour drive south past cattle stations and sparse grasslands, is the next major stop. A wild-eyed town, it nonetheless has a couple of good attractions, most notably the Nyinkka Nyunyu Cultural Centre and the Battery Hill Mining Centre (in the 1930s the area yielded a million buck’ worth of gold daily). As the highway continues spooling south to Alice Springs, stop off to gawp at the vast fields of mega-boulders known as the Devils Marbles – they’re at their most photogenic at sunrise and sunset. 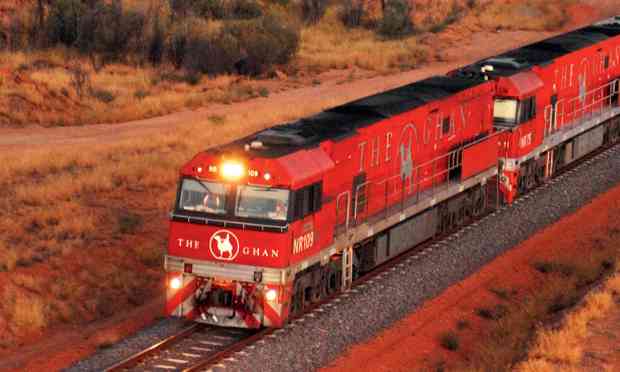 The Ghan, which runs between Adelaide and Darwin via Alice Springs, is one of the world’s best rail rides. Work on the route began in 1877 and didn't finish till 2004 – which tells you all you need to know about the project’s scale. The service is named after the Afghan camel traders who travelled here in the 19th century. The full north-south journey takes 54 hours.