Hit the road, ride the rails, or take to the waves: South Australia boasts plenty of wild and wonderful journeys. These are the best…

Australia has two great coast-to-coast rail journeys: the Indian Pacific, which travels between Sydney and Perth, and The Ghan, which rolls in style all the way from Adelaide to Darwin.

The story behind The Ghan line is a fascinating one: work first began on a rail link between the two cities in 1877, but it wasn’t until as recently as 2004 that the feat was finally accomplished. Aptly, given the endless expanse of outback it passes through, the service takes its name from the Afghan cameleers who came to the Australian desert in the 19th century. 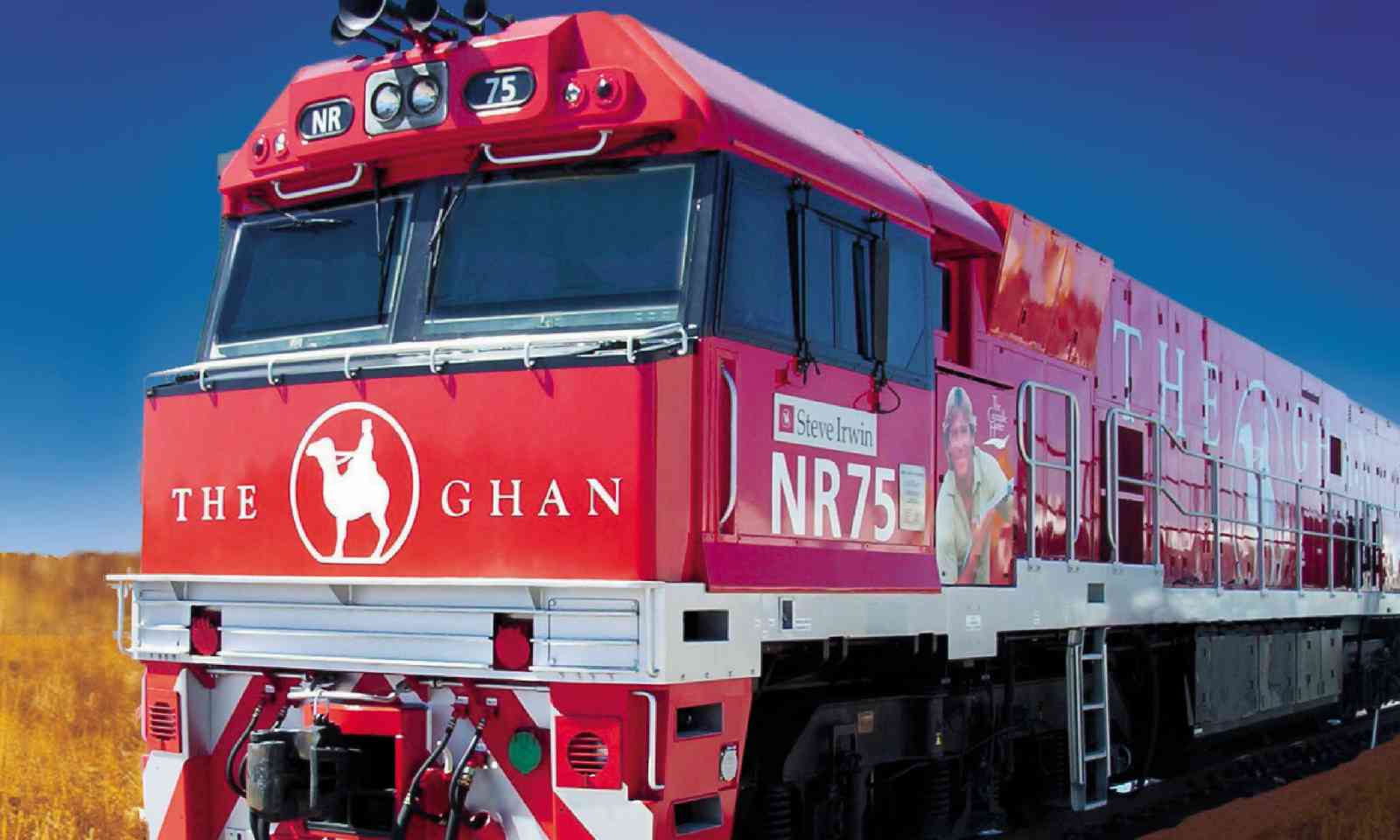 The train is comprised of upmarket private cabins – the ticket cost also covers fine food and wine on board, as well as tours en route in both Alice Springs and Katherine. Between August and October join the ‘Ghan Expedition’ which also includes touring in the outback opal mining town of Coober Pedy.

Kangaroo Island is best known for its wildlife – this is, after all, an outpost for everything from koalas and echidnas to platypuses and kangaroos – but it’s a beautiful island in its own right.

Make the most of the setting by taking a walk along the coastline: special mention goes to the spectacular Hanson Bay Hike, which takes the best part of a day to complete but passes through coastal heath, Pink Gum woodlands and dune banks, as well tracing the shores of freshwater lagoons. 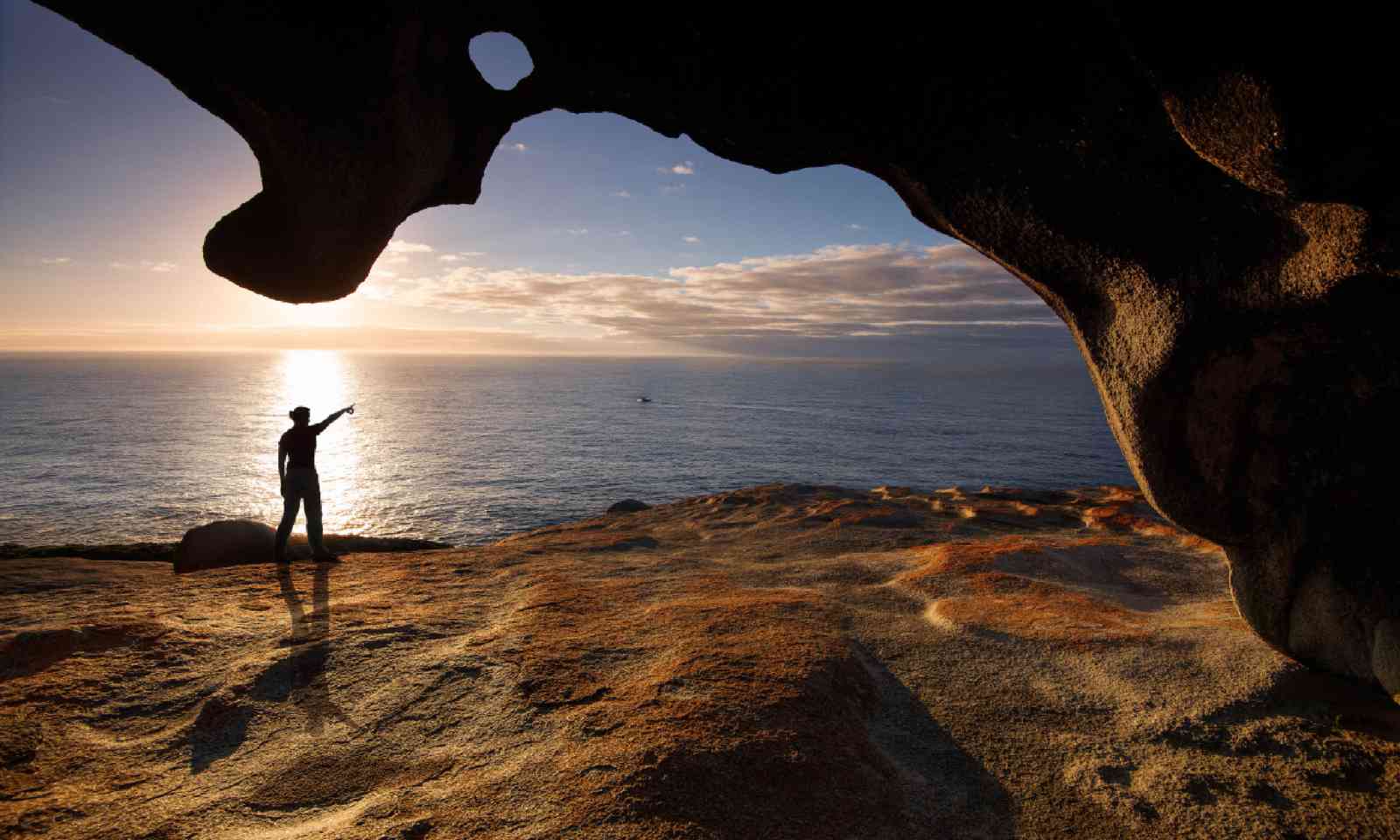 Something shorter? The two-hour Platypus Waterholes walk is easily manageable, and has the added benefit of rewarding patient wildlife-watchers with sightings of one of the country’s most elusive animals. For the more intrepid walker, the five day Kangaroo Island Wilderness Trail – highlighting the Island’s south-west coast - is set to open in mid-2016.

How long does it take? If you stay for a few days, you can explore different coastal stretches.

Eat and drink along the Epicurean Way

Great self-drive routes have more than just an open road and a nice view. A case in point is the Epicurean Way, which lives up to its name by linking together some of the state’s best fresh produce – and, of course, its wine. The route takes in the area’s main wine regions (namely Barossa Valley, Adelaide Hills, McLaren Vale and Clare Valley) and can be easily accomplished from Adelaide. 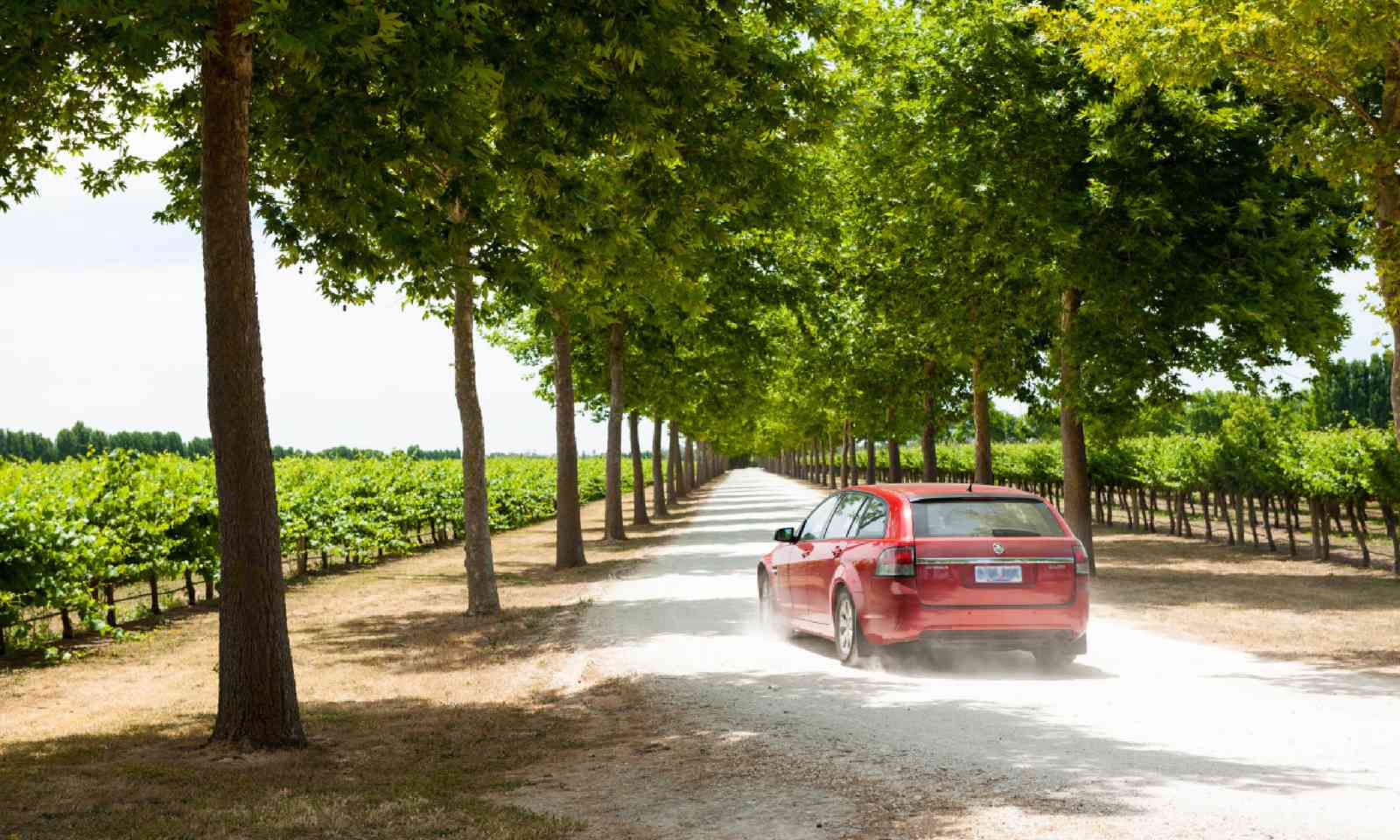 Highlights along the way include cheesemakers, farm shops, craft brewers, chocolatiers, cellar doors and seafood restaurants. Don’t miss the Seppeltsfield Winery, which dates back as far as 1851, and a further tip is to call in at Skillogalee, a Clare Valley vineyard with an excellent restaurant: the changing menu might feature anything from Spencer Gulf prawns to Kangaroo Island halloumi.

How long does it take? Depends on a) how many stop-offs you make and b) your appetite. Five days would work well.

For serious long-distance hikers, walks don’t come much more appealing than the Heysen Trail. Covering 1,200 kilometres from its southernmost point (Cape Jervis on the Fleurieu Peninsula) to its northern tip (Parachilna Gorge in the Flinders Ranges), it winds through some of South Australia’s most inspiring landscapes, including Barossa Valley and Wilpena Pound.

The rest of the route covers an implausibly scenic succession of national parks, forests, vineyards and native bushlands – and if you’re serious about seeing the state, you wouldn’t want it any other way. 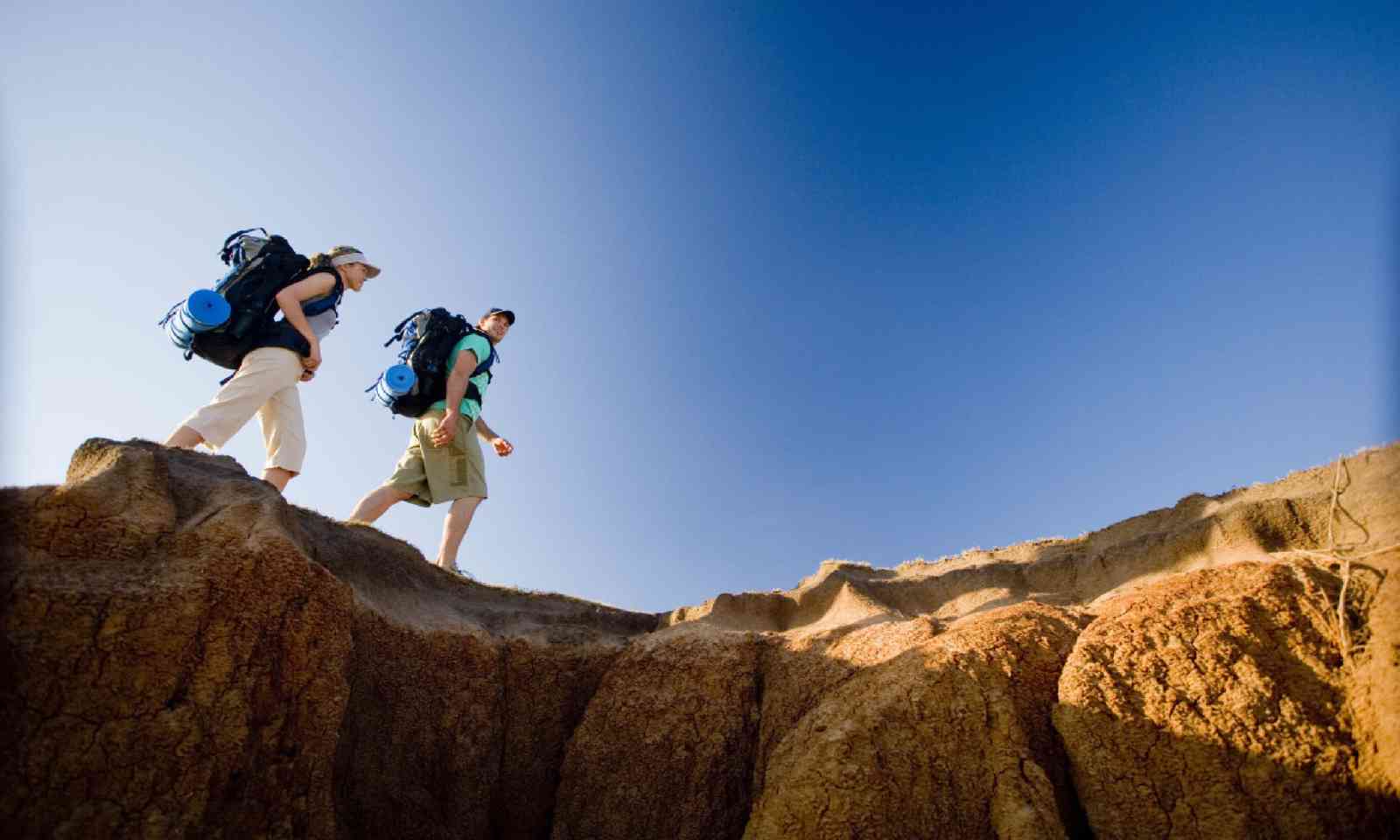 You don’t have to walk the full length, of course. In broad terms, the southern trails are well suited to beginners and those with children, while the northern trails through the Flinders Ranges are higher, more challenging and at times isolated. The walk as a whole is open each year from May through to October. Maps of the route are available in eight different sections.

How long does it take? Between 50 and 60 days for the whole trail.

Sail a houseboat along the Murray River

From its mountain source on the border between New South Wales and Victoria, Australia’s largest river flows westwards for more than 2,500 kilometres. By the time it reaches South Australia – where it flows for 300 kilometres down to the Southern Ocean – it’s an impressive sight, thanks partly to the orchards and vineyards close to its banks. Mark Twain called it “Australia’s Mississippi”. 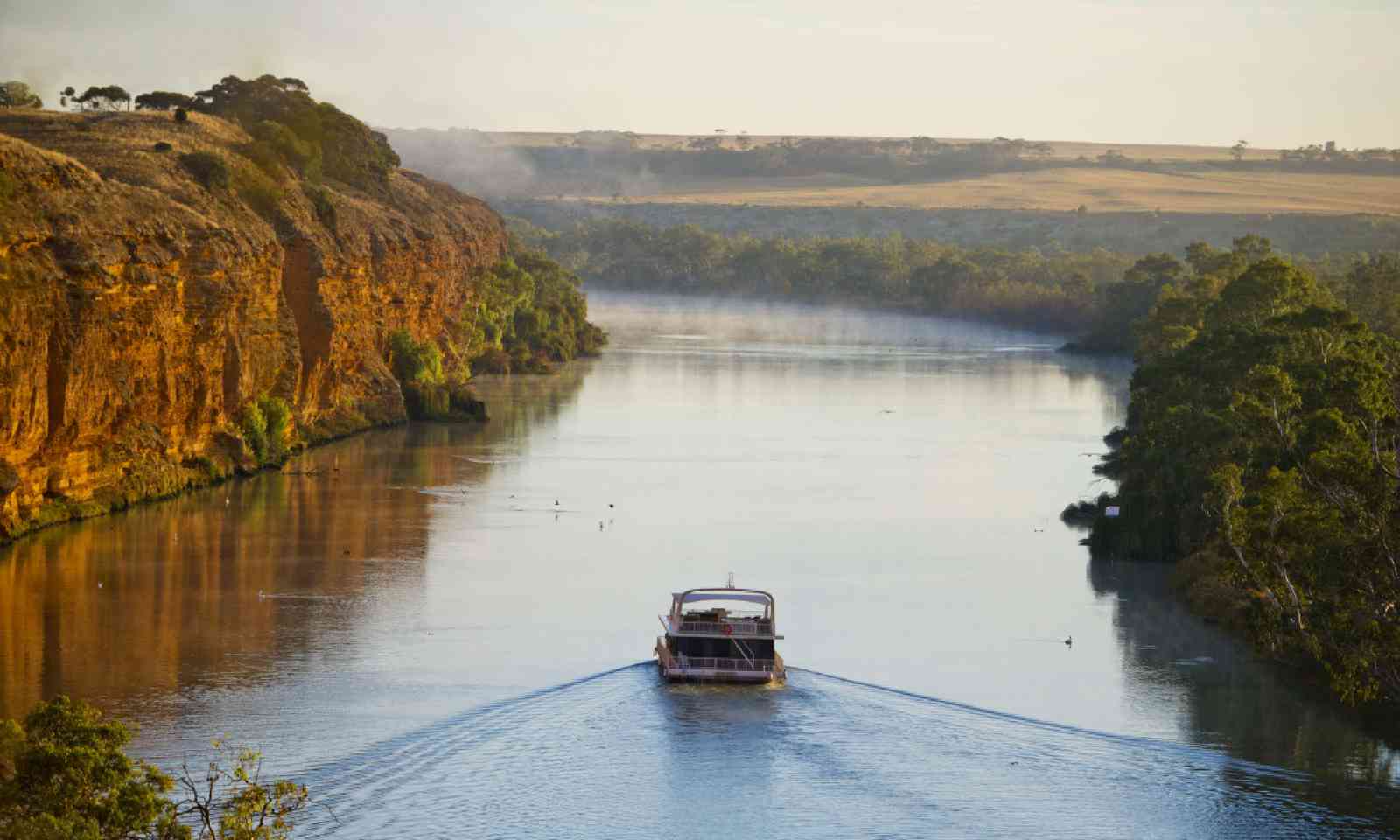 Houseboat on the Murray River (SATC)

There are various ways of enjoying the river itself – kayaks and pleasure-cruising paddle-steamers among them – but nothing quite compares to renting your own houseboat and sailing along at your own pace. You’ll need nothing more stringent than a driving license, and the vessels themselves range from 2- to 12-berth in size. Costs often fluctuate according to the season.

How long does it take? Hire periods are usually three, four or seven nights.

It’s the climate and terrain of the Barossa Valley that make the area so well suited to wine-making – and precisely the same two traits that make it an enjoyable region to cycle through.

There are various trails on offer, but two in particular are worth highlighting. The first is a relatively short ride, the picturesque 27-kilometre stretch known as the Jack Bobridge Track. It runs close to the North Para River and travels between Tanunda and Gawler, giving options to call in at wineries (including Jacob’s Creek). 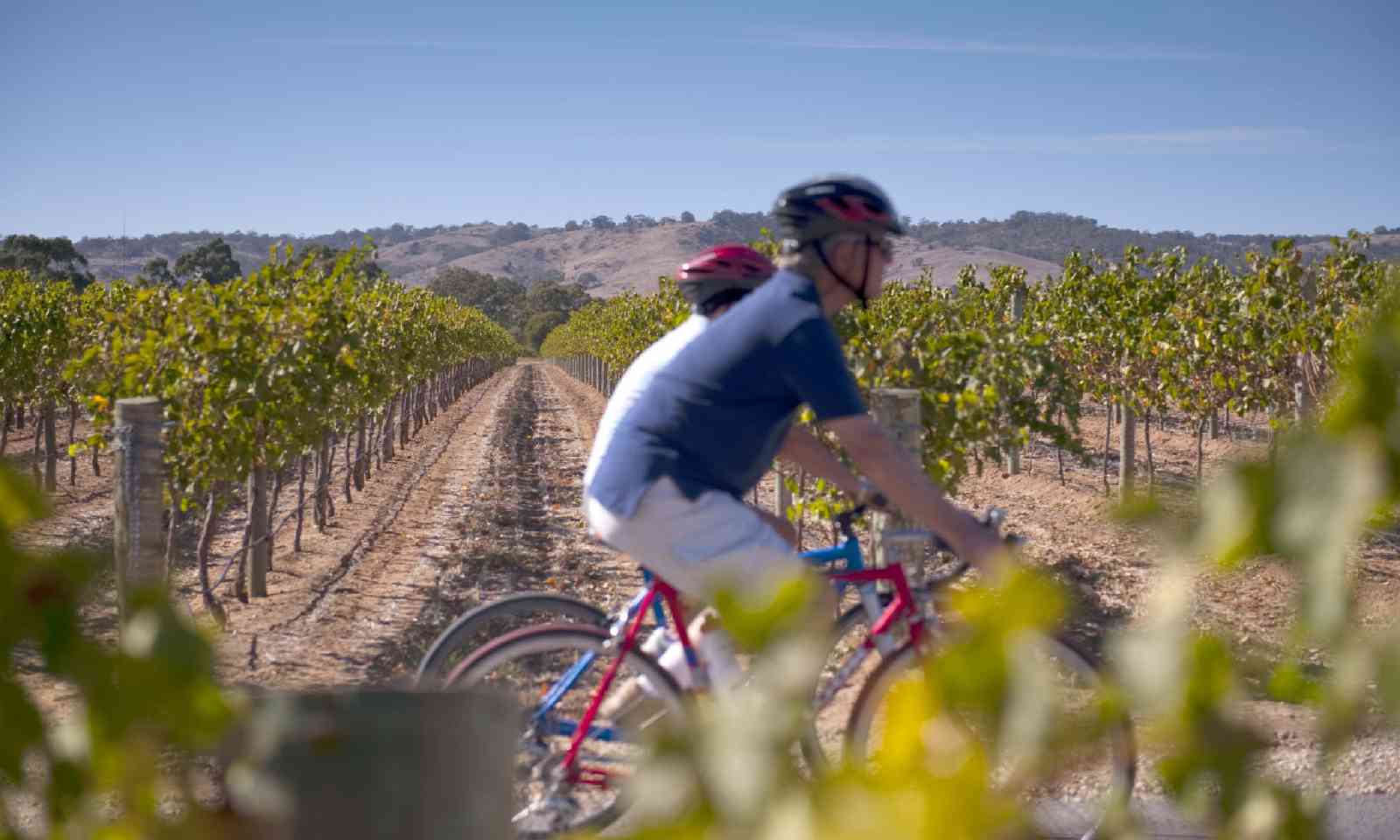 Stepping things up a level, meanwhile, is the far longer Kidman Trail. A multi-use track spooling out for 269 kilometres and suitable too for horse-riding and hiking, it also gives the chance to pedal through the Clare Valley and Adelaide Hills regions. Bike hire is widely available across the district.

How long does it take? Anything from a few hours upwards.

If you’re going to experience the outback, you may as well do it properly. Scoring highly in the rough-and-ready stakes, the Explorers Way runs all the way from Adelaide up to Darwin in the Northern Territory – covering over 3,000 kilometres of jaw-dropping scenery.

Fancy something a little shorter? The 620-kilometre Oodnadatta Track – part of the Explorers Way – runs between the remote towns of Marree and Marla in the desert north of South Australia. 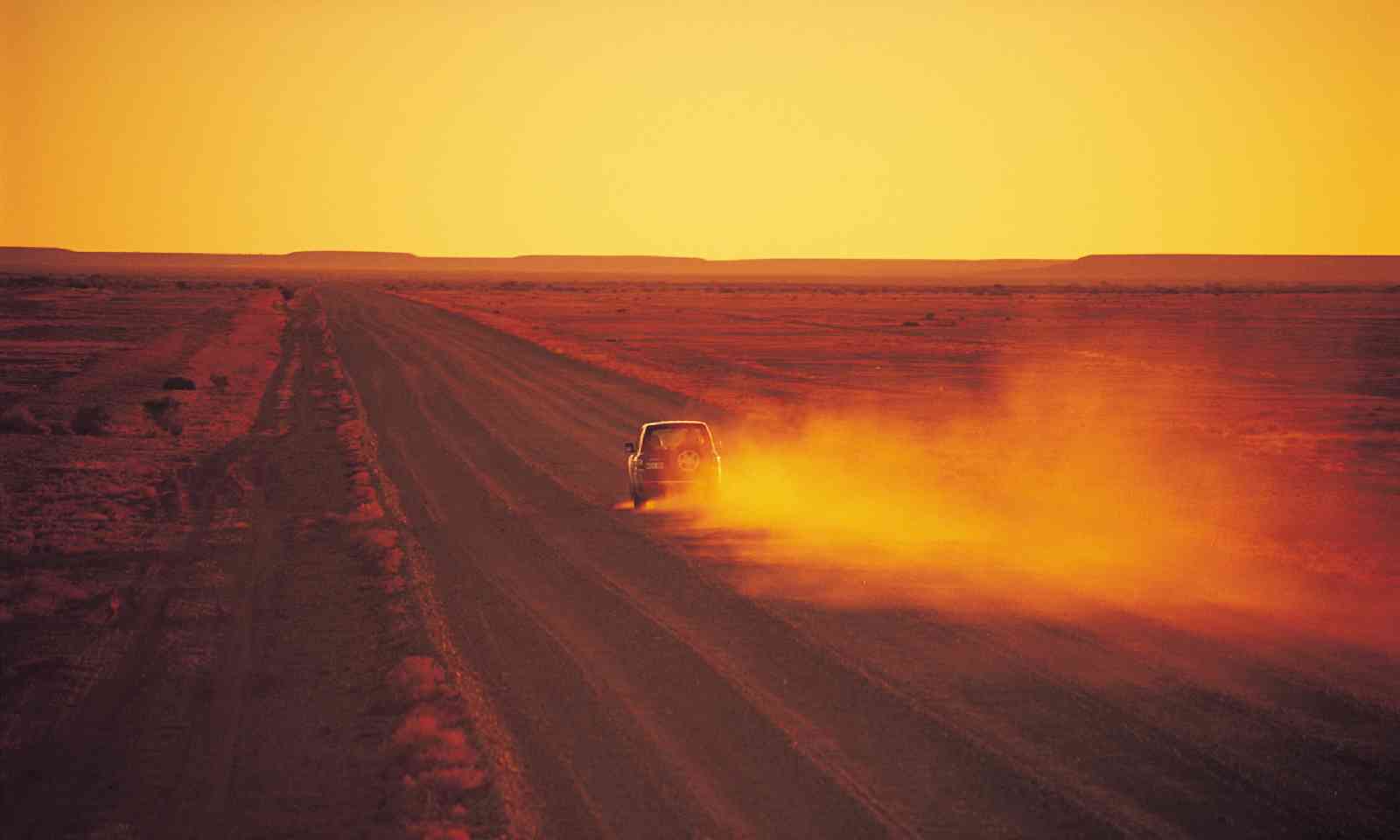 Driving in the Outback (SATC)

Some standard vehicles can make the journey, but you’re highly advised to be at the wheel of a 4WD – and if you’re unaccustomed to this sort of travel, you’ll be pleased to hear it’s considered a great introduction to off-road Outback driving.

There are various points of interest along the way (including fuel stops in both William Creek and the settlement of Oodnadatta itself), and it’s well worth taking a short detour to see Lake Eyre, an enormous but almost permanently dry, salt-encrusted lake marking the lowest natural point in Australia. 4WDs can be hired in Adelaide or Alice Springs.

How long does it take? Two to four days.

Adelaide: a great city for art, a great city for cycling. Combine the two by following the Adelaide Bike Art Trail, which connects together eleven pieces of commissioned public art in and around the city centre.

It’s not a showcase for “traditional” art – the works range from a giant fork to a bronze sculpture of a paper bag – but the project is very much in keeping with Adelaide’s vigorous cultural scene. 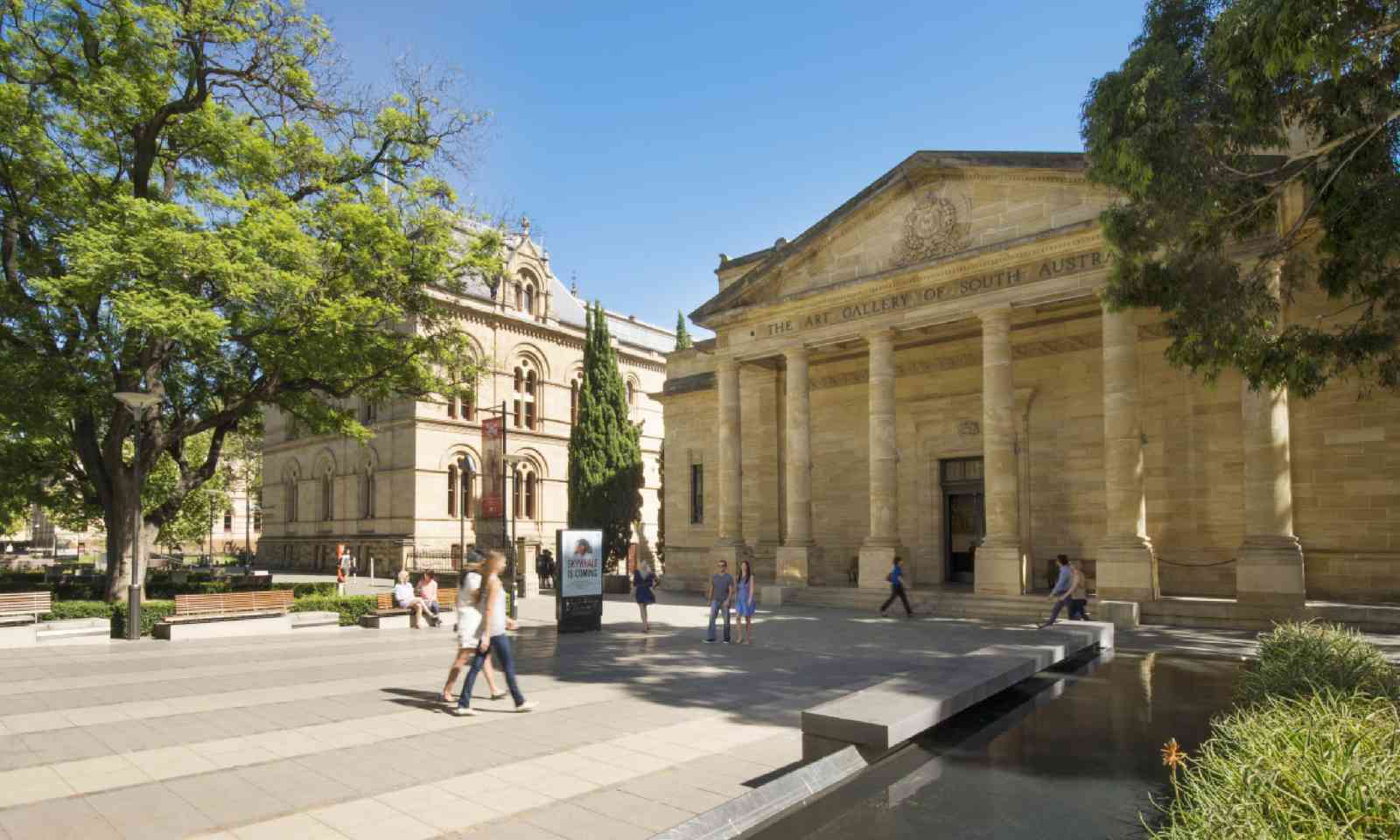 And if you’re after a more conventional approach to art appreciation, cycle up to the superb Art Gallery of South Australia, where its collection of some 38,000 works ranges from Aboriginal art and European ceramics to evocative Australian landscape paintings. The museum is located on North Terrace, billed as the city’s ‘cultural boulevard’.

How long does it take? Half a day.

If riding the Ghan is all about ploughing through the infinite wilderness of the Australian interior, the Pichi Richi Railway represents something rather smaller in scale (although it makes use of the narrow-gauge tracks originally used by the Ghan).

The heritage steam railway has been operated by volunteers for more than 40 years now, and has services departing from both Port Augusta and the Flinders Ranges township of Quorn. 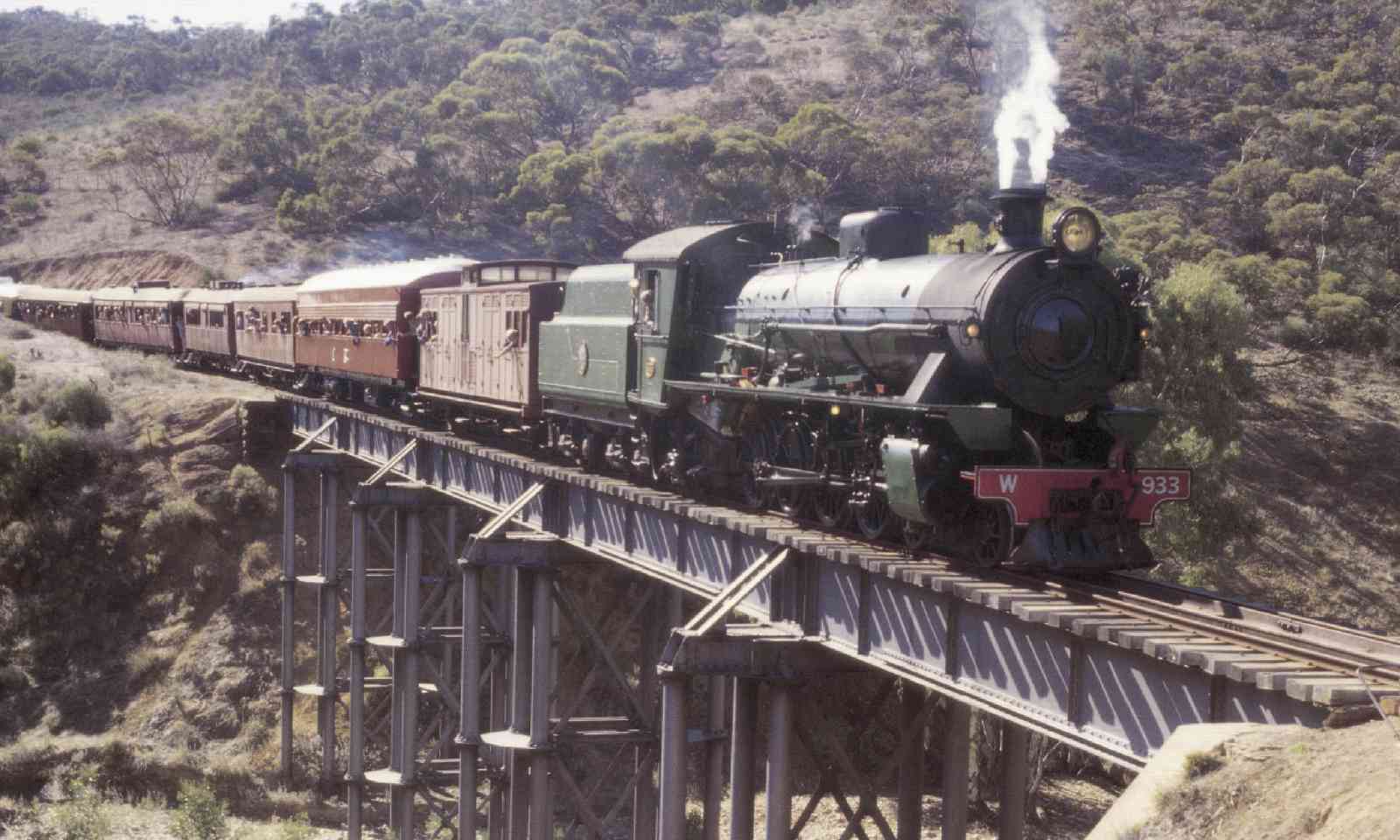 There are four different journeys to choose from. Those travellers catching the early-evening Twilight Explorer service, which departs Quorn at 5.30pm, will see not only the mountains at sunset but also have a good chance of spotting local wildlife. All four services have sporadic departures, and dates are announced online several months in advance.

How long does it take? Journeys range in duration from two-and-a-half hours to almost six hours.