This beautiful coastline has much to offer hikers: from rolling mountains and singing sands, to untrammelled islands rich in culture and wildlife

Peter was showing me the soft-shoe shuffle. “It’s like this,” he said, gliding his moccasins across Whistling Sands beach, walking guide turned Fred Astaire. “Keep your feet light.” I was rubbish at it, of course. So bad, in fact, the ladies from the nearby café came out to help ­– once they’d stopped laughing.

Bethan was sure footed, generating a hearty squeak, but it was Mair who pulled off the virtuoso performance, coaxing a high-pitched whistle from the spherical grains of sand, which then resonated around the coves and inlets of the deserted beach. “Scientists know why the beach whistles when you walk on it,” said Mair. “They’ve done actual tests.” 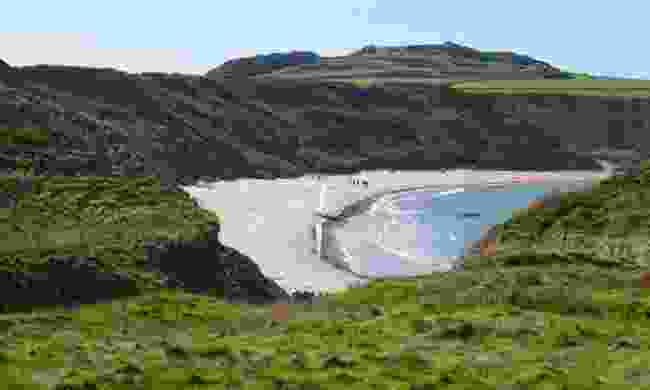 I had come to the Llŷn Peninsula, a defiant finger of the Welsh heartland between Snowdonia and Anglesey, for a taste of the Wales Coast Path. The coastal path around the Llŷn coastline is one of eight sections forming, in total, the whole 870-mile Wales Coast Path. This 95-mile stretch from Caernarfon to Pwllheli offers a microcosm of the entire path, encapsulating the best of coastal walking in Wales: landscape, wildlife and culture. The area was summed up best by the poet RS Thomas, who served as parish priest of the walkers’ hub, Aberdaron. In his poem, Retirement, he described the Llŷn as ‘a bough of country that is suspended between sky and sea’.

The long-distance trail leads from the Welsh border near Chester to Chepstow in the far southeast. It connects existing coast paths, such as Anglesey and Pembrokeshire, to form a continuous circuit, the first such coast path to outline an entire country. Passing through two national parks, 11 National Nature Reserves and 42 Blue Flag beaches, it joins up at either end with the 176-mile Offa’s Dyke Path to create a complete circuit of Wales. 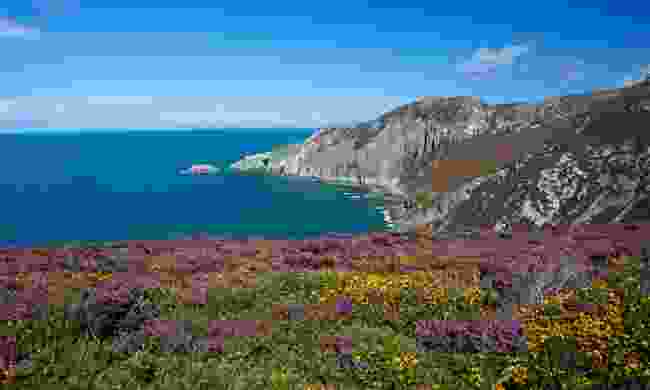 The view from Holyhead Mountain (Shutterstock)

For me, walking the coast was the perfect way to learn about the culture and history of the remote Llŷn Peninsula. I started walking the less developed north coast of the Llŷn at Trefor beach, a 12-mile, linear day walk ahead. Holyhead Mountain emerged through the morning mist on the horizon and, within minutes of hitting the unmarked trail, I was away from all human contact. Herring gulls swooped overhead and a solitary grey seal bobbed in the swell below. I made good progress and worked up an appetite. Just as well. Lunch was waiting for me at a former ghost village.

A triumvirate of vengeful monks put a curse on the village of Nant Gwrtheyrn when the villagers threw out their attempts to bring Christianity to the peninsula in the 6th century AD. They said the village would live and die three times. Today, after stints as a farming, then a granite mining community, it’s on its last roll of the dice. After falling into ghostly disrepair, the deserted village was revived in the Eighties as a centre for Welsh language and culture, which now offers residential courses in conversational Welsh, as well as a café. The village has undergone a £5m renovation in recent years which included construction of a new access road and the addition of a new weddings and conference centre as well as the provision of accommodation for up to 120 guests. 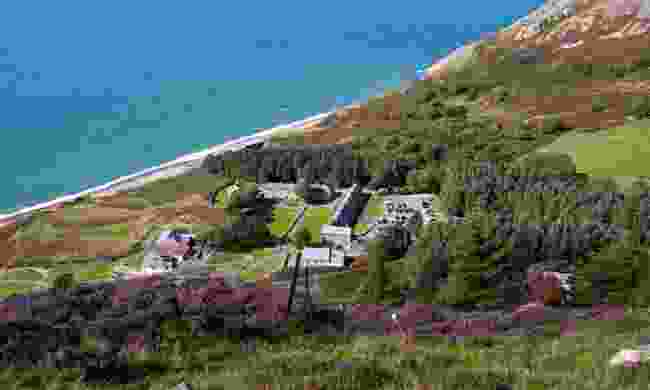 “The Llŷn always had a strong cultural identity as, geographically, it’s slightly apart from the rest of Wales,” says course coordinator Miriam Grant. “Around 80 per cent of the population of the peninsula speak Welsh as their first language.”

“The language is the key to understanding the culture of the Llŷn,” she adds.

Fortified with ham sandwiches and cherry flapjacks, I walked on, following a rare, well-marked section of path to the beach at Porth y Nant, then uphill through a stunted oak forest towards an isolated, whitewashed farmhouse. The whole north coast opened to me in the glorious technicolour of a sunshine-saturated afternoon as I scaled a small hill.

The gurgling sound of water and the heady aroma of fresh herbs drew me towards the next stop at Pistyll Church, just off the coast path in the village of Pistyll. During the 14th-century heyday of the North Wales pilgrimage, when some 20,000 sick and infirm pilgrims traversed the Llŷn en route to a blessing on holy Bardsey Island, this tiny, single-knave church was a key rest spot.

Herbs still grow today by the brook in the churchyard to heal the weary traveller. Rushes and herbs lend the cold-stone aisle a fragrant carpet and, above the simple cross, words etched in arcane Medieval Welsh, read ‘Clodforwch Yr Arglwydd Canys da Yw’. “Sing the praise of the Lord for he is good.”

From Pistyll, the path lead towards the village of Nefyn, connecting back to the coastline to follow the cliffs past wide stretches of sand, lapped by a low, late-afternoon tide and pecked by hungry seagulls. A flat, well-marked path urged me forward, swotting midges and tufts of yellow-budding gorse, on the final strait into Porth Dinllaen.

Tŷ Coch feels like the end of the rainbow to walkers. The terracotta pub, its toes dangling languidly in the foam-lapped beach, is the perfect place to contemplate the day’s walk over a pint. We sat on the wall outside the pub and surveyed the completed path –Trefor, Nant, Nefyn. Oystercatchers skimmed the low tide and fishing boats bobbed in the natural, half-moon harbour, casting their nets for whelks. Beyond lay a clutch of whitewashed National Trust cottages, pots of spring flowers blooming exuberantly around their doors, and a small local history museum to commemorate the peninsula’s shipbuilding heyday in the 19th century. 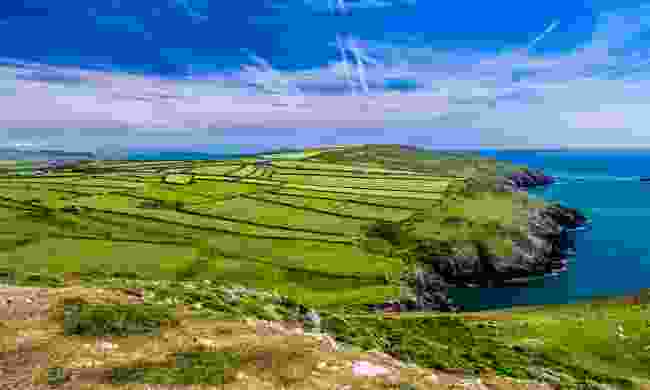 View of the coastal walk near Aberdaron (Shutterstock)

The next day, after a comfy night in a cosy cottage in Aberdaron, my bags having been transferred on ahead of me, I was back on the trail. The section takes in a 13-mile leg to Whistling Sands, followed by another night at base, then a 9-mile trail back into Aberdaron, looping around the protruding nose of the peninsula.

Beyond Whistling Sands, the day’s walk was one of glorious isolation: no villages, people or noise. Just a series of bays and inlets, some steeper scrambly sections of path, interspersed with remote, stoic farmsteads, coastal heathland and the lullaby lapping of waves below. Finally my mind emptied of everyday thoughts and my eyes attuned to the richness of the landscape, wild orchids dotted like hidden prizes on the headland, kestrels soaring seamlessly overhead.

“I love this place,” said walking guide Peter Hewlett as we sat on a bench, overlooking the entire sweep of the bay, all white-froth foam and green-speckled seaweed. “The presence of the sea. The fact the land is not defiled here.”

“It’s like RS Thomas wrote,” he added, reaching for the collected works. “When I come here, I feel I’m ‘castaway on a sea of grass’.”

The path towards Aberdaron was long and deserted. But, before digging in for the final strait, I took a short detour inland to the village of Rhoshirwaun to explore Felin Uchaf. The community arts and craft centre runs courses to revive interest in the traditional artisan crafts of the peninsula, such as dry-stone walling, carpentry and thatching. It also hosts community music and story-telling events in its hobbit-sized roundhouse. Volunteers are currently building a new visitor centre dedicated to the crafts and culture of the Llŷn. 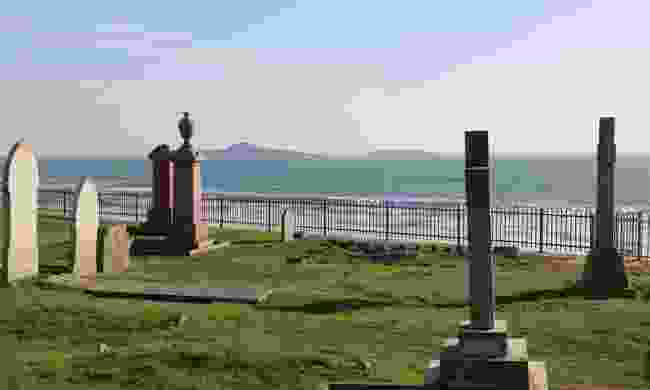 I roll into Aberdaron early evening, boots worn and muscles pinched, to find the waves lapping the sea wall just beyond the graveyard of St Hywyn’s church. RS Thomas was the vicar here from 1967 to 1978, his work commemorated by a small exhibition inside the church. The end-of-the-world location, buffeted by winter storms, is reflected perfectly in his image-rich, often-bleak, verse.

I had a few pints of Glaslyn Ale from the local Purple Moose microbrewery, and a side of Welsh beef, to look forward to. But, first, it seemed fitting to sit a moment, drink in the atmosphere and contemplate the place where both ancient pilgrims and modern-day soul cleansers all pass through. Peter took out Thomas’ collected works one last time and read aloud Pilgrimages, his words cast adrift on the evening breeze towards Bardsey like the souls of the saints.

“There is no time on the island.
The swinging pendulum of the tide
has no clock; the events
are dateless. These people are not
late or soon; they are just
here with only the one question to ask, which life answers
by being in them.”

Top 3 things to see and do 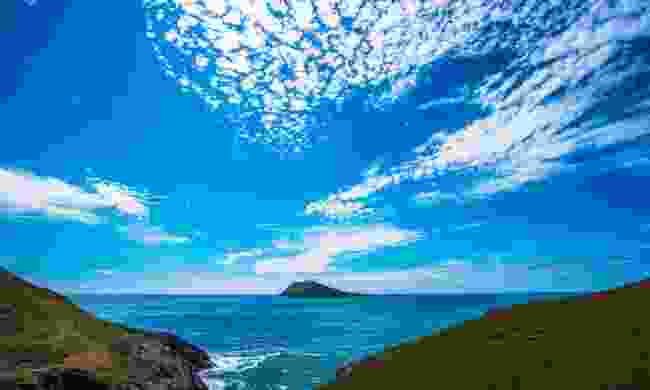 Boat trips to holy Bardsey Island, the ultimate island retreat for medieval pilgrims, run March through October and leave from Porth Meudwy, near Aberdaron. The trips are very weather dependent. Call boatman Colin Evans in advance to book your place (07971 769895; £30 adult return, £20 child). Each boat carries 12 passengers and you have four hours on the island to explore. Alternatively, contact the Bardsey Island Trust for details of hiring out the Grade II-listed cottages to latter-day pilgrims. 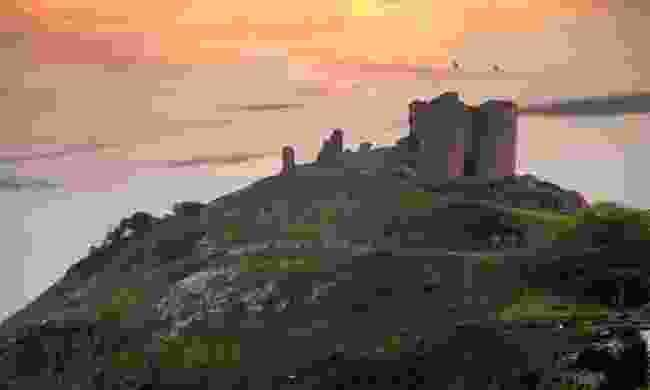 For fans of Welsh castles, Criccieth Castle is well preserved and boats a fantastic position with views stretching across Tremadog Bay to Harlech. Managed by Cadw, there’s a small but informative interpretation centre. Also, nearby in the village of Llanystumdwy, the David Lloyd George Museum (01766 522071; £5pp), recounts the life story of Wales’ best-known politician. 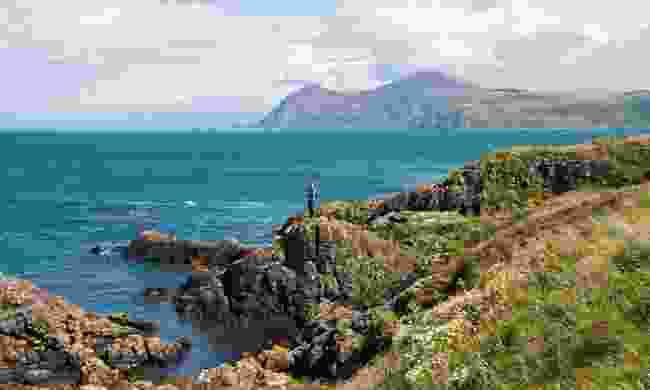 One of the best, and cheapest, things to do on the peninsula is to simply find a quiet beach and try some rock pooling, crab fishing or general mooching. Whistling Sands is popular in summer for its adjoining café, Llanbedrog beach on the south coast is a sandy spot for families, while Porth Towyn, near Tudweiliog on the north coast, is an idyllic hideaway for a picnic without the crowds.

The best places to stay on the Llŷn Peninsula 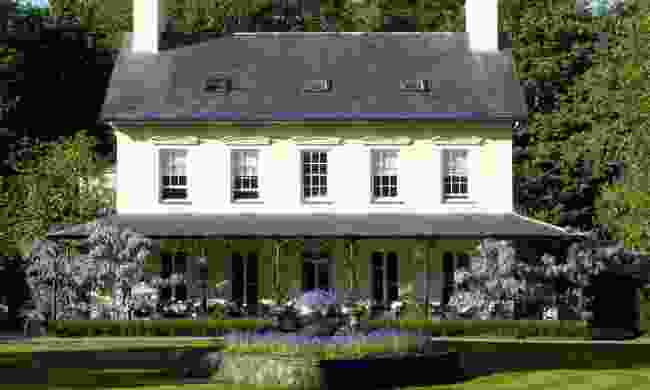 For a night in a stately, country pile, it’s hard to beat Plas Bodegroes for its five-star touches. The Georgian house features 10 individually designed elegant but modern rooms. Don't miss the views over the perfectly manicured garden, or the highly-reputed reastaurant downstairs. 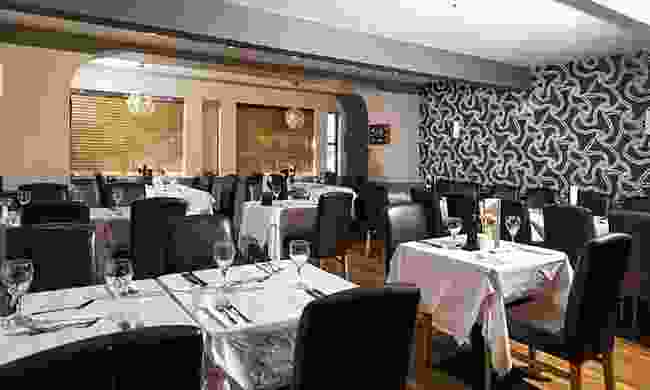 For a room in the heart of the village, the Ship Hotel in Aberdaron  has comfy  rooms (some with sea views) and bear meals on tap downstairs, plus a quality seafood restaurant. 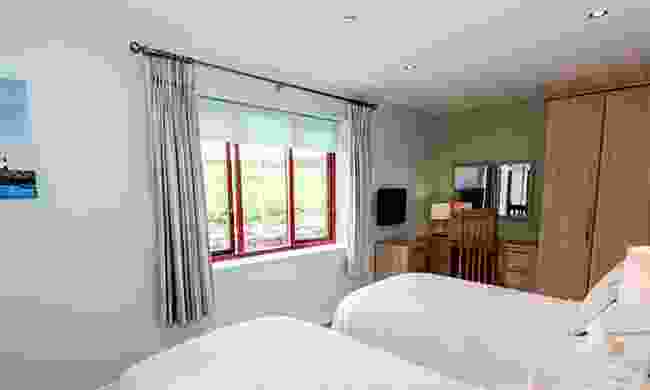 There are lots of cottages to rent across the peninsula. One of the smartest is Manaros (Dolfor; three-night break from £478 in May, sleeps eight) with a huge, open-plan living-dining area and a sunny conservatory. Close by is another stylish property, Ty’n Llan (three-night break from £540 per week in May).

The best places to eat and drink 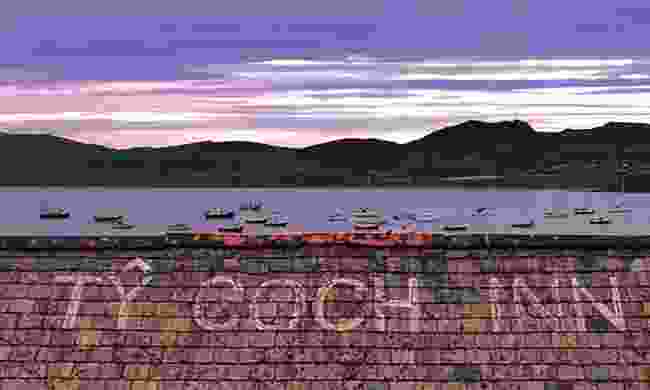 The beach at Porth Dinllaen is home to the quintessential Llŷn pub, Tŷ Coch (Porth Dinllaen). Head here for the best sundowner on the peninsula. 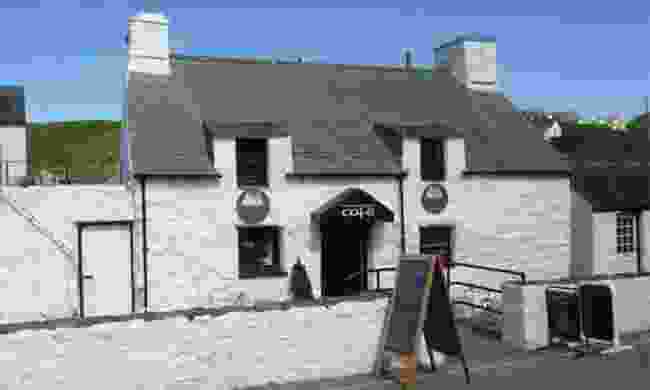 Pilgrims have been gathering at Y Gegin Fawr in Aberdaron since the 14th century when they could stop to claim a meal before heading to Bardsey Island. Today it remains a café, but good café grub has replaced the bowls of gruel. 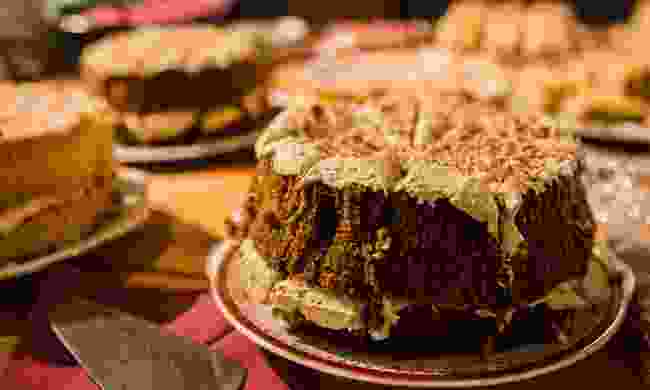