When you start work on a particularly elaborate jigsaw, the common advice is to begin by fitting the pieces on the outside of the picture. This is pretty much what’s happened along the coast of Wales over the past few years. This year Wales can claim a world first as the only country to have a path around its entire coast.

The 870-mile Wales Coast Path, which officially opens in May, is backed by the Welsh Government, and runs from Queensferry in the North Wales Borderlands to Chepstow in the far south-east. Previously, long-distance coastal paths, such as the Isle of Anglesey Coastal Path and the Ceredigion Coast Path, covered around 60% of the Welsh coastline. The Wales Coast Path project connects these existing paths to form a continuous circuit and, crucially, to make the coast more accessible to a wide range of visitors. 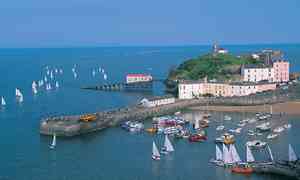 The project will improve access to the coastline for all kinds of walkers, from families to hard-core hikers, enabling ramblers to walk around the whole outline of Wales. The good news is that many sections of the Wales Coast Path are easy to tackle as day walks, often with good public transport connections. The variety of sections also lend themselves to different interests and abilities.

For families: the North Wales Path

Where? Prestatyn to Bangor

Wales’ north coast may be more closely associated with buckets and spades than boots and Gore-Tex, but one of the last sections to link up to the Coast Path is introducing a new generation of walkers to the beauty of the north. For little legs, the eastern leg offers gentler slopes and takes in some of the traditional seaside resorts of the north. Starting at the intersection of the Offa’s Dyke National Trail, the Prestatyn Dyserth Way, a former railway line, takes the zigzag path into Rhyl. It then hugs the coast through Abergele to reach Llanddulas, where it plunges inland to meander the rolling hills of rural Conwy for a few miles.

The path rejoins the Wales Coast Path by coming down through the back streets of Old Colwyn, leading visitors on through Colwyn Bay and Rhos-on-Sea to Llandudno, the renaissance-Victorian town described by the American author Bill Bryson as his “favourite seaside resort.” From the high points, you can gaze across the brooding summits of the Snowdonia National Park.

After cresting the impressive limestone headlands of the Little Orme and Great Orme, either side of Llandudno Bay, an old-school family day out at the seaside is the perfect way to wind down from your walk. Don’t miss Professor Codman’s Punch and Judy show, stuffing small change in the slot machines on the pier and rounding off the day with a slap-up fish supper at Fish Tram Chips. The cod special, including mushy peas and a pot of tea, costs just £8 – bargain!

If you’re still feeling energetic, the path continues further west along an upland stretch through the foothills of the Carneddau Mountains, where you will be walking along ancient routes dotted with mystical stone circles and Medieval settlements, the domain of bygone communities.

In the spring listen out for skylarks, meadow pipits, stonechats and choughs, and look out for the mountain ponies as they roam free in the open landscape. Generations of families have taken their holidays near here but few probably realised how close they were to nature.

Jenny Towill, Coastal Access Officer says: “Before reaching Bangor, the North Wales Path takes a dip down into the Aber Falls National Nature Reserve and leads past the 120ft spectacle of Aber Falls. This renowned beauty spot is a perfect place to enjoy a picnic while cooling your feet in one of the picturesque pools – a perfect way to end a hard day of walking.”

Where? Porthcawl to Aberthaw

Glamorgan’s heritage-rich coastline, one of the first three Heritage Coasts designated in the early Seventies, may not be the most instantly familiar to ramblers. But keen-eyed fans of the TV series Dr Who will recognise the locations in a flash of a sonic screwdriver, such as Bad Wolf Bay where Billie Piper (Rose) played out a dramatic series-end finale with David Tennant. In real life, that’s Glamorgan’s Southerndown Bay.

But it’s the traces of the area’s rich heritage from Norman castles to traditional agriculture that really sets this section of coast apart. The small but comparatively dramatic path, walkable in a day and moderate going aside from some steep valleys, is alive with sites and legends. Ogmore Castle on the Ewenny River was a key Norman base, while Iron Age hill forts litter the trail with links to the past.

It’s also rich with ecological diversity, taking in rocky and sandy beaches, crashing-wave cliffs and, at Merthyr Mawr, a nature reserve with some of the highest sand dunes in Britain. Choughs have recently returned to the coast after over 100 years with two pairs now nesting successfully and, given the southerly location, the variety of butterflies attracted to the coast is particularly impressive. The limestone landscape encourages some rare species of flora, such as the Tuberous Thistle and Clustered Bellflower. 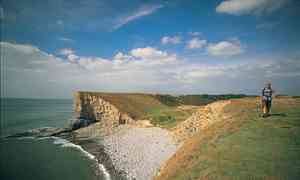 Make a stop at the Heritage Coast Information Centre, based at Dunraven Park in sheltered Southerndown Bay, to swot up on the history, flora and fauna. Better still, call ahead and check the tide times to help plan your visit. Catch a spring tide and you can walk the whole section of the soft-sand beach amid the second biggest tidal range in the world.

Paul Dunn, Principal Ranger, says: “My favourite place is on top of the headland at Witches Point, Southerndown Bay. You’re standing within an Iron Age hill fort, a settlement touched by history over thousands of years. I love this section of the Welsh coastline for the way you can walk through different settlements from the Iron Age via the Romans to the era of industrialisation.”

Pembrokeshire’s long-distance coast path, some 85% of which lies within the Pembrokeshire Coast National Park boundary, is Wales’ best-known destination for walkers. It punches well above its weight internationally. Indeed, the 186-mile trail in West Wales was recently named the world’s third-best walk by travel advisor Cheapflights, beating the Inca Trail, Peru, and Mount Kilimanjaro, Tanzania into the top three. This is the domain of the more serious walker. The 14-day walk takes typically 14 miles per day to conquer and the landscape shifts organically, moving from the rugged, wave-lashed coast of the north to the sandy beaches and sheltered coves of the south. It’s a popular trail but still feels gloriously isolated with – aside from Tenby – mainly small settlements along the way.

The area is rich in historic remains with Castell Henllys, a reconstructed Iron Age hill fort, the only roundhouses in Britain reconstructed on the site where they were excavated. It is also noted for its diversity of wildlife, high-quality habitats and rare species. One third of Britain’s nesting pairs of choughs are to be found in Pembrokeshire, while Grassholm Island has the world’s largest gannet colony.

Highlights include the city of St Davids; with its imposing, 13th-century cathedral and landscape-inspired new art gallery, Oriel y Parc, just a one-mile detour from the official path and an ideal place to break the walk. Fishguard’s Town Hall, meanwhile, plays host to a compelling little exhibition of the Fishguard Tapestry, a Bayeux-style tableau to record the last ever invasion of Britain by a ragtag of French mercenaries in February 1797. But, most of all, it’s a back-to-nature experience with attractions and challenges for all weathers. With 13 Blue Flag beaches in 2011, and 60 Sites of Special Scientific Interest, it’s a long walk but every day is different.

Charles Mathieson, Head of Recreation and Tourism, Pembrokeshire Coast National Park Authority, says: “For me what makes it special is the real diversity of experiences – the little bays, coves and headlands. There’s something new around every corner and something different each season – seals pupping in autumn, coastal flowers in spring. I like the walk around the Angle Peninsula just south of Milford Haven. There’s a challenging and exciting section round to Freshwater West – a really wild, Atlantic walk.”

For more about the Coast Path Project visit: ccw.gov.uk

Fancy a shorter stroll along these sections of the Wales coast path? Read weekend walks in Wales

Back to Discover Wales