Pink sand and wildflowers: The 7 best parks in Utah

Utah has no shortage of wild places, from its astounding Mighty 5® national parks to its 44 lesser-known (but no less deserving) state parks. Discover the best places for hiking in Utah...

Utah has no shortage of wild places, ranging from its astounding Mighty 5® national parks – Arches, Bryce Canyon, Canyonlands, Capitol Reef and Zion – to its 44 lesser-known (but no less deserving) state parks. Wade through rivers on a backcountry hike, wander barefoot between rolling sand dunes or get lost in a labyrinth of otherworldly rock formations. Here are a few places to get started. 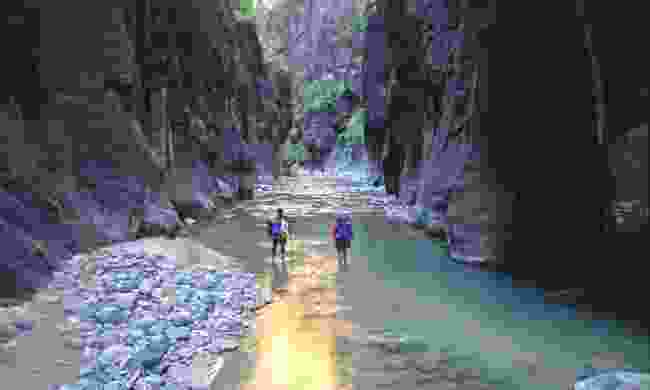 In Utah’s southwestern corner, Zion National Park manages to stand out as the most visited of the Mighty 5®. And it comes as no surprise, as its soaring vermillion cliffs, rimmed with wildflower-filled valleys, lush riverine forests and cascading waterfalls, feature among the country’s most spectacular natural sights.

Hiking is an almost essential activity here, and you’ll find options to suit all abilities. For a relatively easy introduction you can try the popular 2.5-mile Emerald Pools Trail, which traces a circular route across the wild terrain outside Zion Lodge via three spring-fed desert oases. Don’t miss the Upper Pool, which is flanked on three sides by colossal cliffs and a high waterfall.

For more of a challenge, try the unforgettable nine-mile backcountry trail in The Narrows, one of Zion National Park’s best-known (and most strenuous) day hikes. You’ll wade along the north fork of the Virgin River between towering walls of Navajo sandstone, sandy gravel banks and trickles of cascading water. 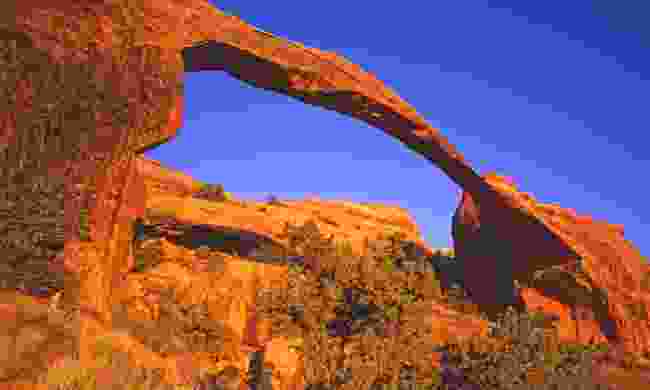 Towering red arches are almost synonymous with Utah, and Arches National Park, just outside the laidback town of Moab, is home to the greatest collection of them all. You’ll find over 2000 of them here, standing to attention on the otherwise stark desert plains against a spectacular backdrop of snowy peaks.

The hikes out to see them are generally short, and thus perfect for families and beginners. Out of all of them, don’t miss the 1.6-mile out-and-back route to the enormous Landscape Arch, which is among the biggest in the world at almost a hundred metres across. The narrow ridge is one of the oldest features in the park, and it’s possible it could collapse at any time – go now before it disappears.

Alternatively, make the trip to Double Arch, which features among the park’s most iconic formations. It’s made of two separate arches that share the same foundation and support each other. To get there, you’ll need to hike for less than a mile and the trail will lead you directly beneath them. 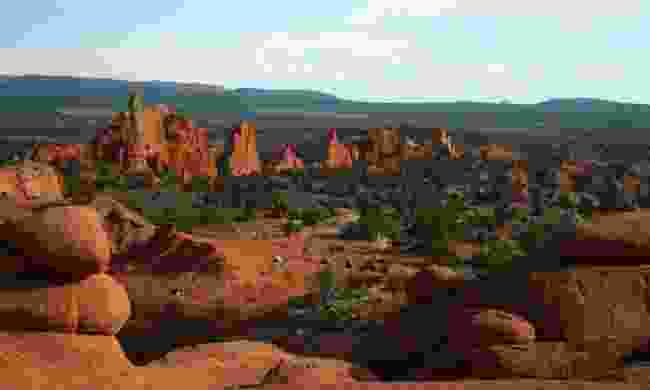 Kodachrome Basin State Park is a haven for photographers

A haven for photographers, Kodachrome Basin was named after a type of Kodak film by a National Geographic Society expedition in 1948, after they discovered the park’s photogenic multi-coloured sandstone spires. There are 67 of these unique rock formations here in all, which stand over six feet tall and come in varying shades of red, pink, yellow and white.

It’s worth heading out on a hike for an up-close look at the spires, and one of the best options is the 5.4-mile Panorama Trail loop, which will lead you past sand pipes and ochre cliffs to a lofty vantage point for unparalleled views over the area. You’ll find the park beside Grand Staircase Escalante National Monument on the southern edge of the state. 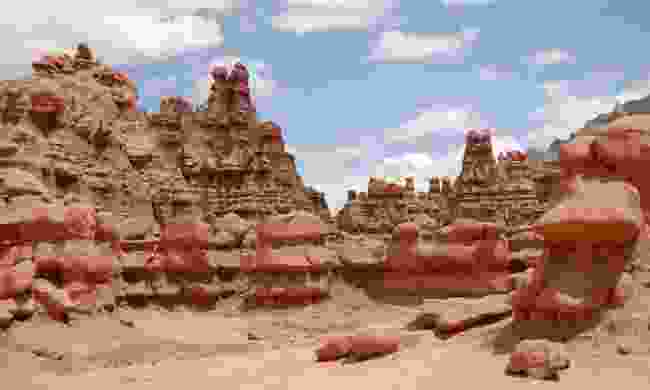 The Valley of the Goblins along the San Rafael Reef could easily be the setting for some otherworldly fairy tale, an almost Martian land of twisted hoodoos and red-rock monoliths set within a crumbling gorge. These magical geological formations have formed over the course of millions of years, and created a landscape that is quite unlike anywhere else in Utah.

The real highlight of the park is that you can roam freely – there’s no requirement to stick to the three marked trails. You can explore the labyrinth of sandstone creatures at your leisure, discover your favourite goblin and climb to a high overlook to soak in the extraordinary scene. If you’ve brought a mountain bike, don’t miss the Wild Horse mountain bike trails, a collection of five easy loops that lead you through little-visited sections of the park that are known for their sweeping desert views. 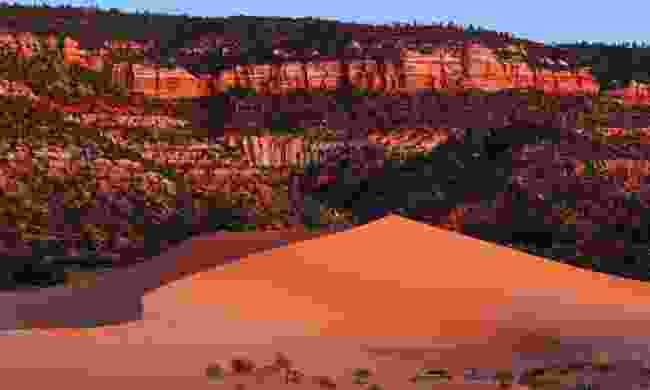 Lying off the radar in the shadow of Zion National Park, the eponymous dunes of Coral Pink Sand Dunes State Park are the only major ones of their kind on the vast Colorado Plateau. They’re best known for their unusual salmon-pink hue, the result of the continual erosion of the nearby Navajo sandstone cliffs, and are estimated to be anywhere in the region of 10,000 to 15,000 years old.

Today, the park has gained a reputation for being an off-road adventure playground, and ATV riders flock to the area every day to spend time tearing up and down its sandy slopes. In all, around ninety percent of the park is open to four-wheelers.

But it’s just as enjoyable to hike barefoot across the shifting sea of warm sand, wander between juniper groves and hunt for wildflowers. Keep an eye out for the elusive Coral Pink tiger beetle, which can only be found here, and stick around until sunset to watch the waning light colour the dunes a warm gold. 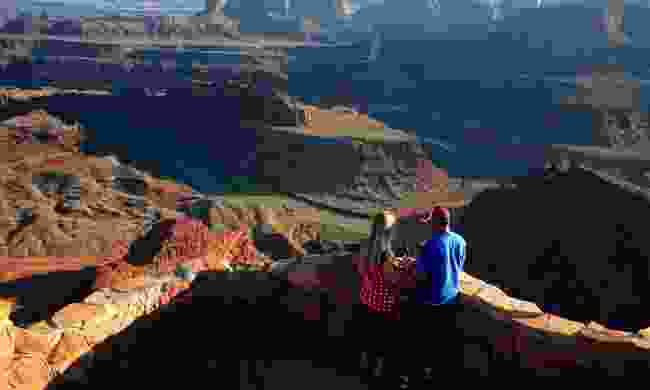 Dead Horse Point is an iconic park, not least because it starred as the Grand Canyon in the dramatic finale of Thelma & Louise. The eponymous point is at the end of a mesa, protruding over 600m above the Colorado River on the edge of Canyonlands National Park.

According to legend, the park owes its name to the point’s former use as a natural corral for wild mustangs, some of which met an unfortunate end in the arid desert climate. Today, Dead Horse is renowned for its spectacularly lofty views, as well as its status as an official International Dark Sky Park. As it’s based on a high plateau, free from natural obstructions and light pollution from the cities, it’s one of the best places to stargaze in the Moab area. 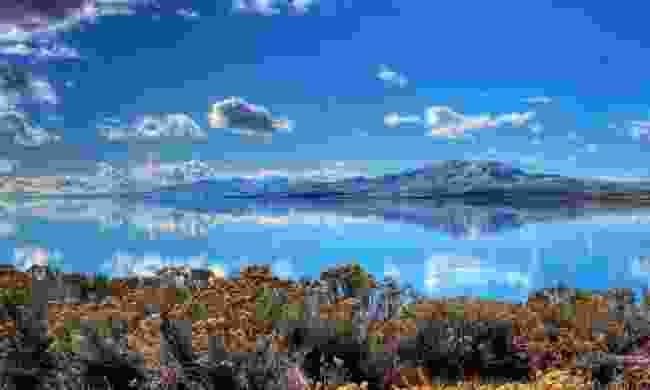 Antelope Island State Park, 25 miles north across a causeway from Salt Lake City, is the largest island on the Great Salt Lake. It’s renowned for its wildlife, not for the antelopes after which it was named, but rather for the 500-strong herd of American bison that roams its grasslands and low-lying mountains.

Every autumn, these enormous animals are brought together for the Annual Bison Round Up, in what is widely regarded as one of Utah’s greatest sights. You’ll also spot mule deer here, along with pronghorns, bob cats, coyotes, hares and various species of waterfowl.

Wildlife aside, you’ll find plenty of opportunities for hiking and biking, with 36 miles of easy trails crisscrossing the island. Spend an afternoon climbing up Frary Peak, the island’s tallest mountain, and watch the sunset over the lake. Antelope Island is also an official International Dark Sky Park, so you can stick around until night falls to watch the stars twinkle into life overhead.

There's much more of Utah left to discover... 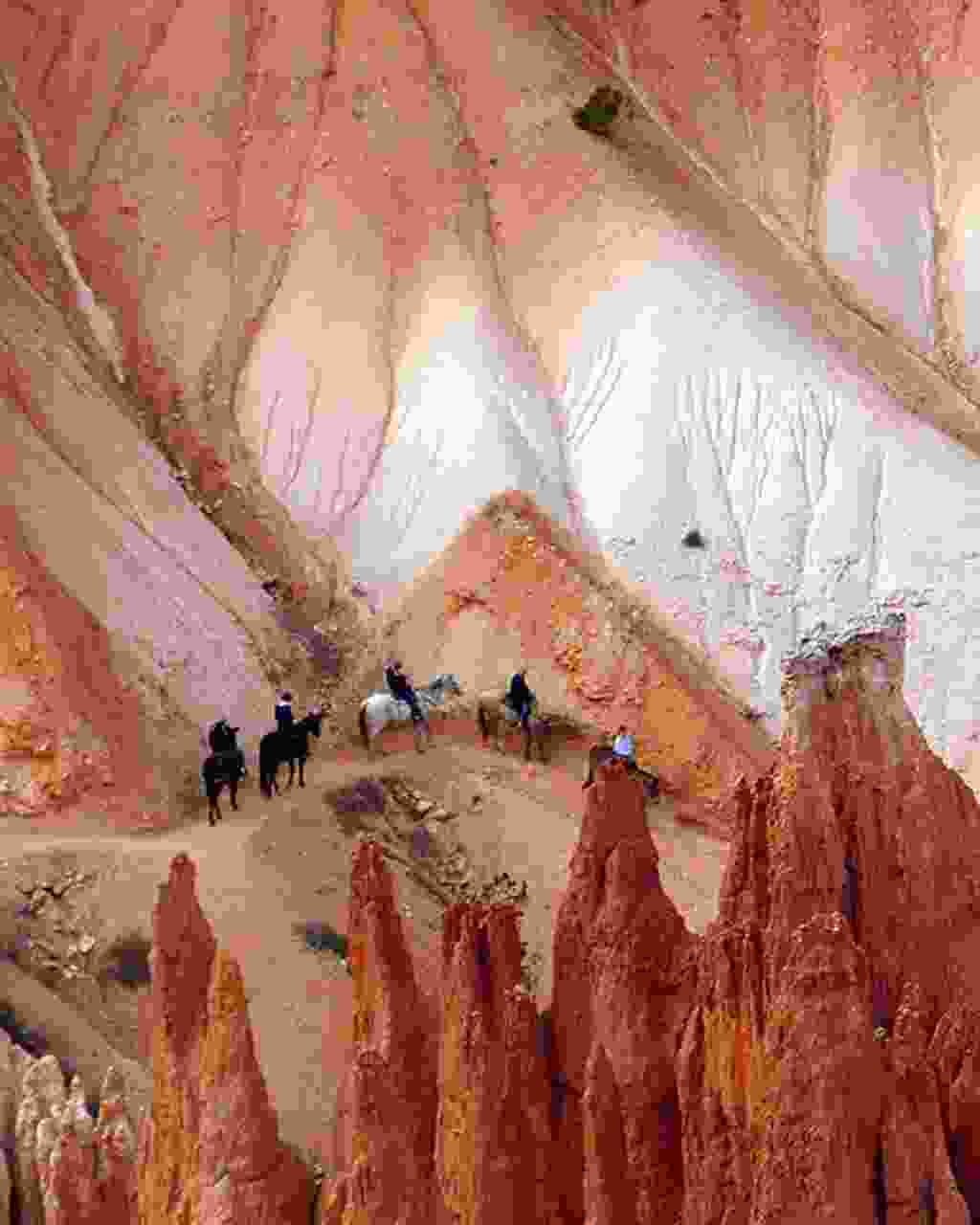 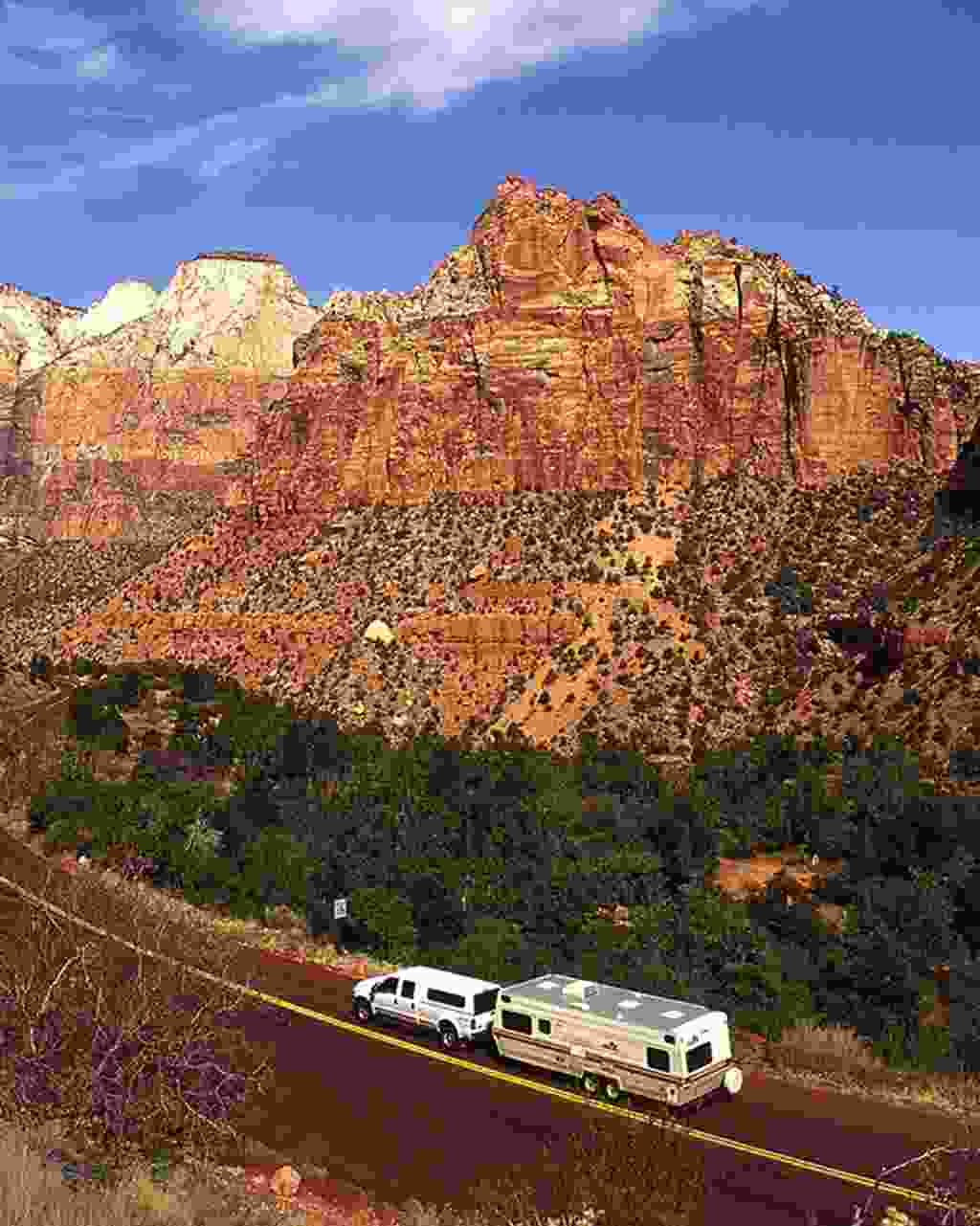 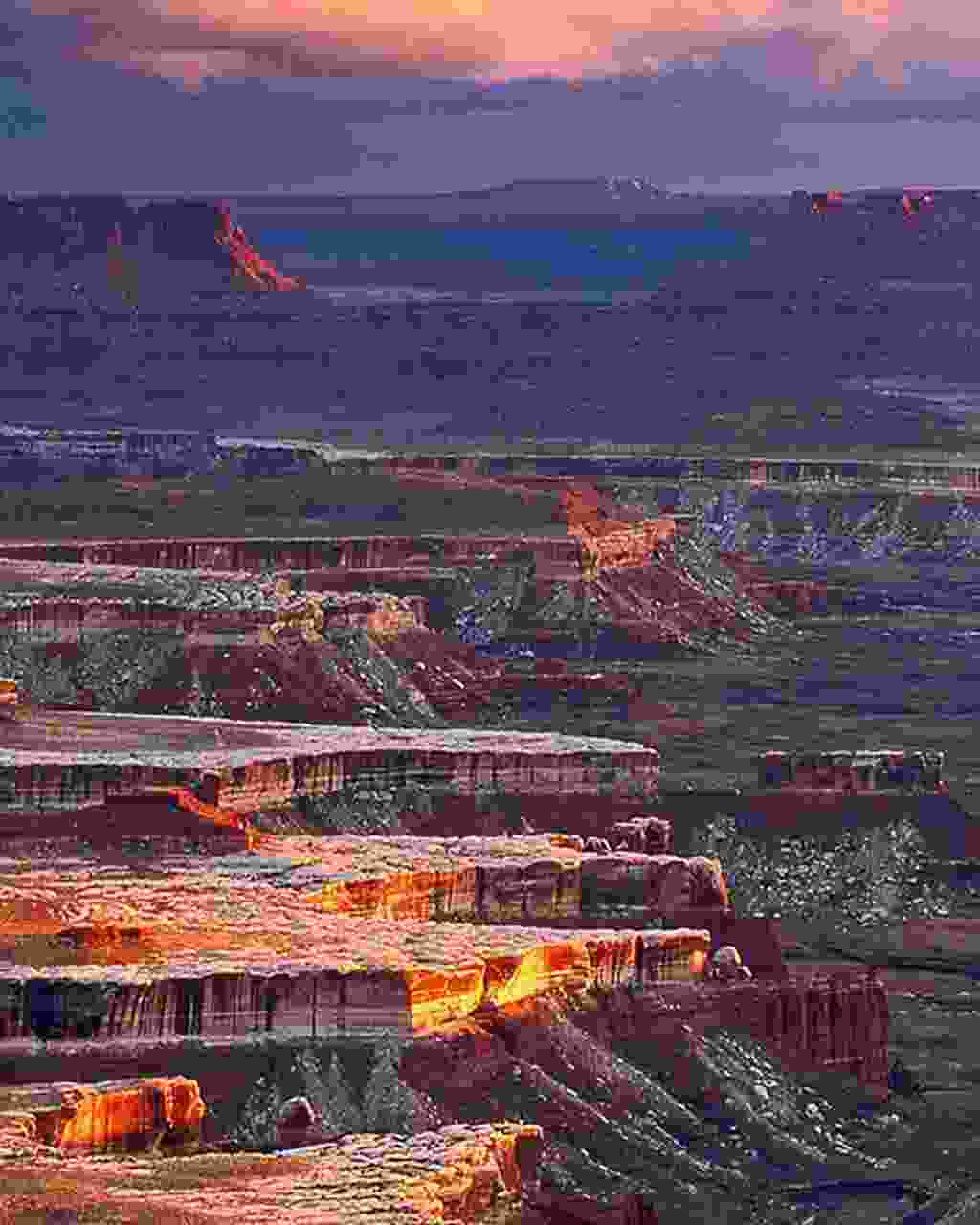