Go wild! 7 ways to immerse yourself in Tobago’s nature

Whether you’re on land or in water, Tobago’s wealth of natural riches never fails to surprise. Here are seven ways to see its wildest sights…

1. Spot a rainbow of birdlife 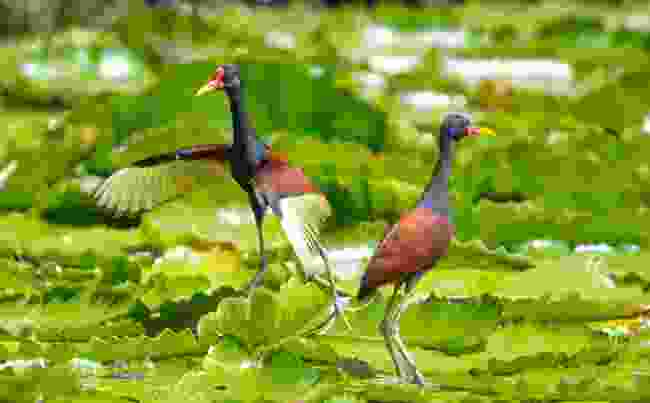 With over 260 different species of bird calling Tobago home – one of the highest densities in the world – birdwatchers are in for a real treat. It’s as much about quality as it is about quantity in Tobago, with a kaleidoscope of birds brightening the forests, skies and surrounding waters with their neon flashes of colour. You can spy the island’s national bird, the rufous-vented chachalaca, among the canopies of Main Ridge Forest Reserve. Journey to Corbin Local Wildlife Park to see motmots, jacamars and manakins or capture the glowing feathers of the many different hummingbirds that light up the Adventure Farm and Nature Reserve. Set sail to the off-shore island of Little Tobago, a haven for frigatebirds, red-billed tropicbirds and the red-footed boobies.

2. See turtles nesting on the sand 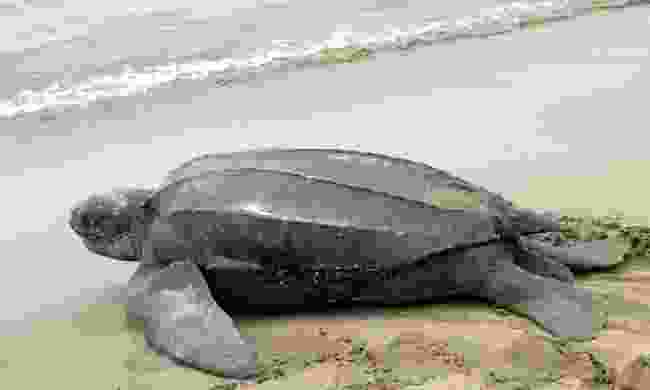 Tobago’s turtles can be spotted gliding among its coral reefs year-round, but for a truly special encounter, wait until they surface on land. Between March and August each year, female green, hawksbill and leatherback turtles haul themselves up Tobago’s golden sands to nest before their hatchlings make a mad survival dash to the ocean. The aptly named Turtle Beach is the best place to witness this natural phenomenon, but Stonehaven and Grafton beaches are also great choices to see them. All three species are critically endangered, so a mixture of guides and volunteers ensure visitors are kept a respectful distance during the spectacle.

3. Hike in the oldest protected forest reserve in the western hemisphere 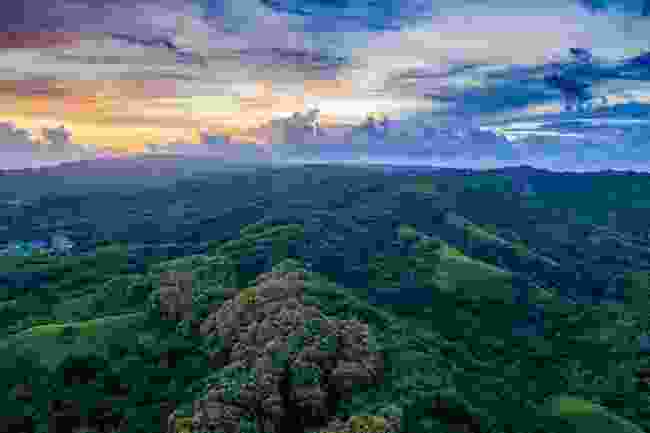 Established by the British in 1776, the Main Ridge Forest Reserve was the first reserve to be given protected status in the western hemisphere. Following a large chunk of Tobago’s craggy spine, the reserve has been left alone ever since it was founded, allowing for its ancient medley of virgin jungle, rugged contours and cooling waterfalls to blossom into a wild mosaic. A number of walking routes give you prime access to this wilderness, with the most well-known being the two-hour Gilpin Trace trail. You’ll cut right through the reserve’s thick rainforest, spotting beguiling creatures like armadillos, agoutis and snakes along the way. Main Ridge is also one of only two places in the world where you can spot the elusive white-tailed sabrewing.

4. Mountain bike along the coast 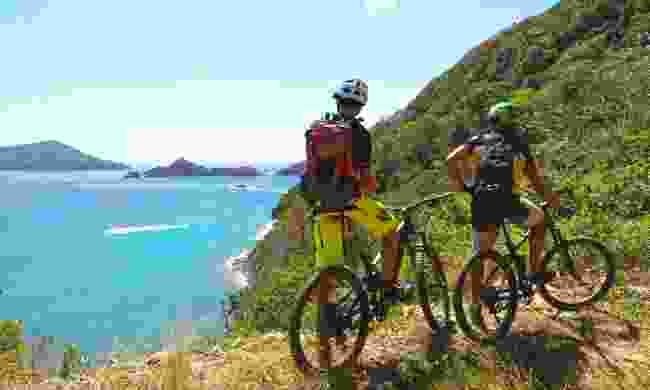 If you want a shot of adrenalin while exploring Tobago, hop on two wheels. Mountain bike trails criss-cross the island, with some taking you to hidden corners you can’t see otherwise. Wind through the mangroves of south-western Tobago to the bird-rich wetlands of Bon Accord Lagoon, pedal through the old plantations of Les Couteaux to the cooling pool of Highland Waterfall and, for the more seasoned bikers among you, tackle the moss-green hills which connect Arnos Vale and Golden Lane. You can even pedal in the bike tracks of locals, with the short-distance Chala’s trail a route created by villagers to reach their homes. 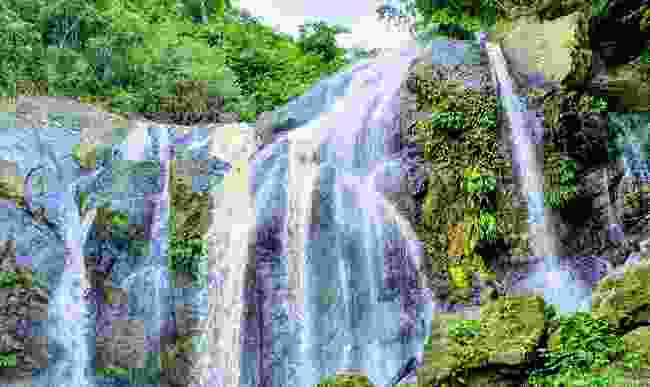 Tobago’s emerald core is striped with waterfalls seeping from its central upper highlands, many of which feature as exciting conclusions to jungle hikes. Tucked within pristine rainforest, Argyle Waterfall, the island’s highest (54m), is its most iconic. The waterfall tumbles down a trio of different levels, each one with a refreshing crystal-clear pool perfect for rejuvenating tired post-hike muscles. If you want to dodge the crowds,  you can escape to Highland Waterfall, the island’s tallest single-drop cascade or Parlatuvier's Fall which welcomes visitors with a natural plunge pool both at its crest and at the bottom. 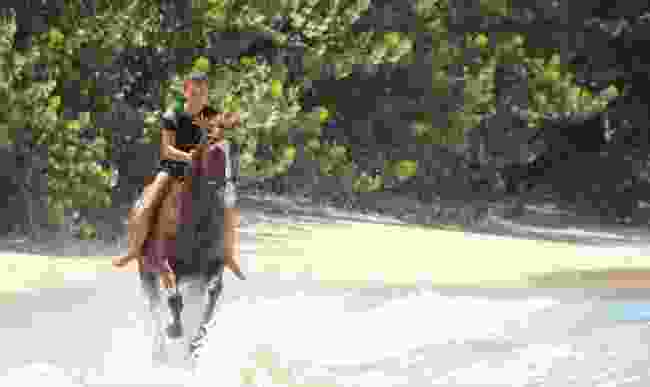 If hiking and mountain biking is just too mainstream for you, then you can see Tobago from a completely different perspective: a top a horseback. Meet your friendly equine in the south-western village of Buccoo before saddling up for a ride through Tobago’s landscapes like no other. Pass the village’s candy-coloured houses and goat racing track – a legendary sport on the island – before making your way past the mangrove-filled wetlands which fringe the coast. Now, here comes the really fun bit: plod along golden Buccoo Beach before your horse wades into the gin-clear waters up to its neck for a gentle swim around Buccoo Bay – a feat that not only keeps their coats lustrous but helps forge a unique friendship between the pair of you. 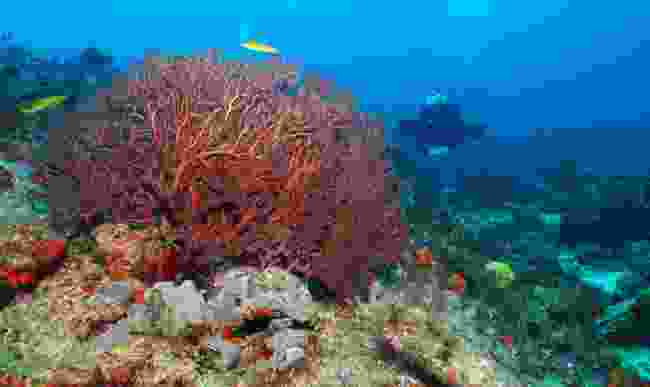 Dip your head underwater in any direction off Tobago’s coast and you’ll be greeted by multitudinous marine marvels. Diving adventures abound, from the luminous corals and sponges of the submerged Japanese Gardens off the northern coast of Speyside to the dramatic overhangs of London Bridge, teeming with turtles and porcupine fish. Experience a nose-to-fin adventure with hawksbill turtles at the fine dive site of Mount Irvine in the south-west combined with other remarkable diversity can that also be found lurking underwater.  Explore the now iridescent coral coated cannons left behind by the Dutch East India Company, the former ferry MV Maverick that has been sunk to provide a new artificial reef and Kelleston Drain which serves up a once-in-a-lifetime sight: a 16ft-wide brain coral that has been growing for centuries.