Full travel guide to the Philippines

Island adventures, an incredible culture, tasty food and pristine natural beauty awaits in the Philippines. Discover all this and more with our full travel guide...

How to get to the Philippines and getting around 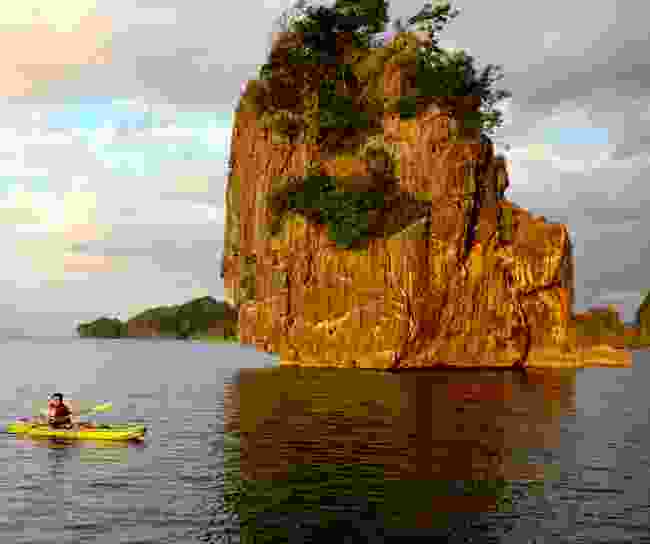 Direct flights with Philippines Airlines from London Heathrow to Manila resumed in 2021 for the first time since the Covid pandemic began. They take around 13 hours. Alternatively, connecting flights from the UK go via Hong Kong, Bahrain, Singapore, Dubai, Seoul and other stops.

Such is the size of the Philippines (some 7,641 islands), flying is the most convenient way to travel internally. Many of the main cities are linked by domestic carriers. However, ferry and catamaran services are more comprehensive for visits to the smaller islands, with Visayas in particular serviced by a large network of inter-island boats.

By road, air-conditioned coaches link many of the larger destinations on Luzon, Visayas and Mindanao, with jeepneys (colourful car-buses) and tricycles ideal for short trips within the local area.

5 adventures to have in the Philippines

1. Trek the summit of Osmeña

Osmeña is the highest peak on Cebu. At 1,013m above sea level, it’s not too much of a challenge and just a 20-minute hike if you start from the park entrance. Yet, as you scrabble up the last jags of pitted limestone, your reward is a rare panorama of green-tufted hills stretching to the horizon. If you’re looking for a longer adventure, the seven-hour hike from the dazzling Kawasan Falls to Osmeña sees you trek beautiful countryside along the way. Finish by camping overnight near the peak, to see the land below bathed in a golden haze at sunrise.

The UNESCO-listed Tubbataha Reef Natural Park is unique. Home to half of the world’s coral species, its remote location (10–12 hours by liveaboard from Puerto Princesa) has ensured this part of the Sulu Sea was all but unreachable to local fishermen for generations. It was left to flourish, and even today is still thriving thanks to its protected status. Now, its 700 fish species, turtles, sharks, mantas and reefs make for a wild diving experience, whether joining the predators of Shark Airport or exploring the Deslan Wreck. Surrounded by nothing but the water’s ebb and the odd whale shark drifting by, it feels like another world entirely.

It’s not hard to see why they call Mindanao’s Hinuatan the ‘Enchanted River’. Its impossibly clear, iris-blue waters come from deep underground and emerge barely 300m before spilling into the estuary. It’s like a magic trick: blink and you miss it. Most of the submerged cave system from which it pours is still uncharted, so it’s little surprise that legends of fairies and mysterious fish grew up around these waters. It’s not hard to reach though, and after a 10-minute walk through the jungle you can leap into the cooling river and spy huge schools of silvery fish congregating at its mouth. Magical.

The far north-western tip of Luzon is where the Cordillera Mountains simply run out of land. It is perhaps best known for its beaches, with the white sands of Pagudpud’s Saud Beach hailed as the ‘Boracay of the North’. But if you lift your gaze to the horizon, you might see one of its less-heralded delights. The coast, and Paoay Lake in particular, offer sightings of rare local and migratory bird species. Visitors like the declining Chinese egret or endemic Philippines ducks, notable for their orange head and blue beaks, are just a couple of its prized spots.

The ‘Chocolate Hills’ get their moreish name from the terse shade of brown the summer sun bakes the grasses of Bohol. Yet it’s not the colour but the sheer scale of the hills that make this natural wonder so unique. More than a thousand rounded grassy limestone mounds dot the flat jungle floor here, resembling the world’s most ambitious bubble wrap. Some rise as high as 500m, with the entire complex spanning miles. Views from the town of Carmen and Sagbayan Peak are worth jostling for, especially when you arrive around dawn and sunset.

3 must visit beaches in the Philippines

Off the shores of the Caramoan Peninsula lies a wondrous archipelago of green-tufted islets encircled by milk-white sands. Local boats can deposit you on lone spits of shore wrapped by caves and grassy hikes inland. But, for a truly serene escape, make for the sandy lagoon of tiny Matukad – its setting is as close to perfection as it gets.

Another enticing island chain is Calaguas, found in the Caramarines Norte Province. Its white shores are a match for even Boracay, though far less developed, and the 2.5km Mahabang Buhangin on Tinaga Island is one of few beaches you can camp on, waking up to ocean views backed by rolling green hills furred with jungle.

Lastly, what sandal-wearing traveller hasn’t heard of Boracay. Its bleached shores are hailed as the gold standard by which most others are measured. These days, it’s filled with plush resorts, but when you tire of others you can always hop on boat trips around the islets or head out to snorkel its impossibly clear waters alone. Bliss.

3 cultural experiences to have in the Philippines

Hewn by hand for over 2,000 years, the rice terraces of Banaue are almost a living record of life in the Cordillera range. The villages of the Ifugao people scatter these hills. Some are just a few miles apart but they might as well be on another island, with unique cultures, festivals and traditions utterly removed from their neighbours. Multi-day hikes let you spend more time among these communities, where planting and harvest seasons are everything. Try to arrive in time for April’s triennial Imbayah Festival (next one in 2022) and you’ll witness a wealth of traditional games and feasts – there’s even a hand-carved scooter race!

This UNESCO-listed 16th-century city of Vigan is everything Spanish colonial towns in Asia aspired to be: ordered, civilised and elegant. That its historic centre – all hard-wood mansions, abundant cobbles and horse-drawn carriages (calesas) – has survived so much history intact is a miracle. Yet there is more here than colonial relics. Local potters still turn out their famous burnay pots, a legacy of pre-colonial Chinese immigrants, and outside Calle Crisologo and its historic mansion museums, a typical Filipino city bustles on the outskirts, albeit scented with the great culinary legacy of the conquistadors – empanadas.

The city of Cebu grew out of the original Spanish settlement in the Philippines, built in 1565. Its docks even still host the old fortifications, rebuilt in stone in the 18th century. Fort San Pedro has served as a garrison, a prison and even a zoo, but is surprisingly well preserved. You can also visit the islands’ first church, the Basilica Minore del Santo Niño de Cebu. Rebuilt in the baroque style, it contains a celebrated Flemish statuette gifted to the explorer Ferdinand Magellan, a complicated figure in the Philippines but still credited as the first to bring Catholicism here. The revered Magellan’s Cross, held in a pavilion on Plaza Sugbo, is said to contain fragments of the original crucifix he planted on Cebu’s shores in 1521.

What to eat in the Philippines 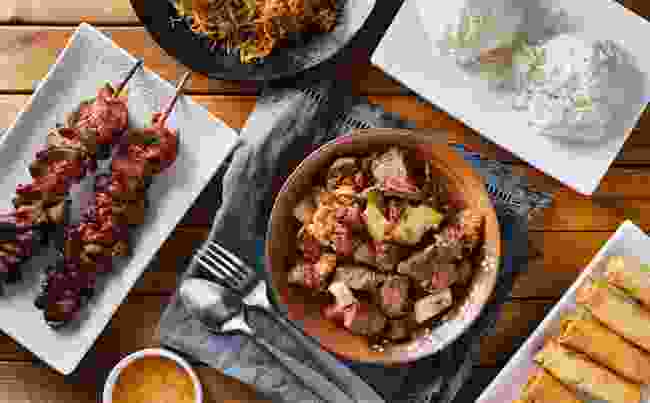 Seafood is everywhere here, though Roxas City in Capiz Province is often dubbed the islands’ ‘Seafood Capital’ thanks to its mix of Sibuyan Sea and a water-logged coast home to thousands of fish farms. For a local take on surf ’n’ turf, try squid stuffed with pork (rellenong pusit).

Despite an abundance of seafood, cooking in the islands is quite meat-heavy, with adobo (stewed meat in a tangy marinade) among the more famous dishes. For true indulgence, try crispy pata, deep-fried pork leg where meat and crackling alike is then dunked in a soy-vinegar dip.

Start the day with a classic ‘silog’, fried egg and rice usually accompanied by either dry-cured beef (tapsilog), pork belly (tocsilog) or corned beef (cornsilsog). A true breakfast of champions.

Everything you need to know about the Philippines – including safe travel updates, getting there and around, where to stay, and heaps of inspiration for things to see and do – can be found on the official Philippines website.