Live out the Galápagos dream with a visit to this land of some of the world's most diverse marine life, Darwin's legendary Theory of Natural Selection, and pristine landscapes that you've never seen before

South America packs in quite a few trips of a lifetime, bucket-list dead certs that all aspiring global travellers dream of fulfilling. The Galápagos Islands is, indisputably, one of them. Its fame reaches us early, at school, when we learn of Darwin and are taught about natural selection and his multifarious finches. TV documentary makers love the Galápagos because they can film its amazing wildlife in pristine environments and without any intrusion from humans, traffic, noise, urban stuff.

An archipelago of 21 islands, just 906 km west of the coast of Ecuador, these islas can be approached from as many angles as there are species. Here are seven fool-proof ways to access a wonder of the natural world.

1: Get your boots on 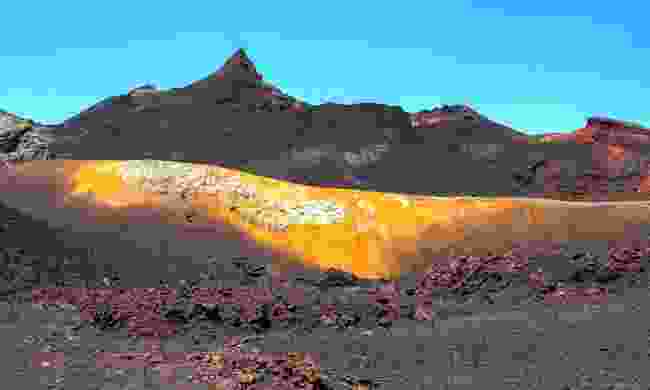 Volcanic, full of crazy lava-daubed colours, cactus-strewn and with lots of hills steep and shallow, the Galápagos offer plenty of opportunities for stretching your legs way off the restricted wildlife trails of the coastal fringes. Isabelle Mazille, Journey Latin America’s Product Manager for the Galápagos Islands, recommends a hike up to Isabela’s Sierra Negra volcano: “Climbing steadily through lush countryside you’ll reach the crater rim, with fantastic views into the second largest caldera in the world [after Ngorongoro].

From here the landscape changes dramatically as you drop down through a lava field of twisted rock formations and lava tunnels. The final stretch enters an otherworldly multicoloured landscape of sulphurous yellows, deep reds and rusty oranges to the parasitic crater of Volcán Chico.” 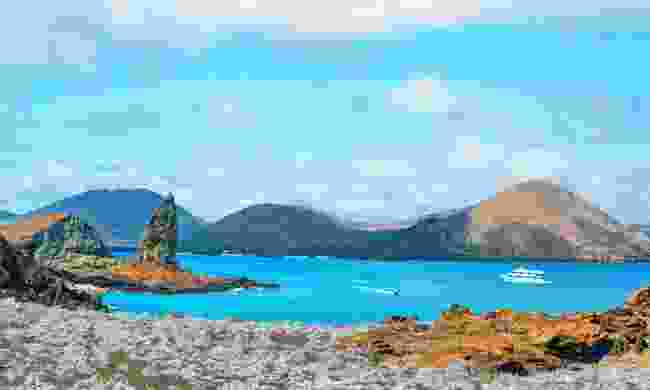 Cruise around the islands (Shutterstock)

Ecuador manages the delicate ecosystems of the Galápagos by restricting access and numbers of visitors; ships are one of the best ways to do this. A cruise also opens up remote islets and lonely bays for passengers. Visiting vessels ranging from small luxury yachts to larger expedition ships and sailing boats.

Mary Anne Nelson, Senior Travel Consultant for Journey Latin America’s tailor-made department, recommends combining a voyage with downtime. “Cruise or island hopping adventures in the Galápagos involve busy days with early starts, several shore excursions a day and daily opportunities to snorkel, swim, kayak or do stand-up-paddle-boarding. It’s great, but can be tiring! To return from holiday not just buzzing with what you have seen but also well rested, then spend two or three nights in a beachfront hotel, or at a quiet lodge in the peaceful highlands, to enjoy the stunning white sand beaches or relax by the pool after your action-packed adventure.” 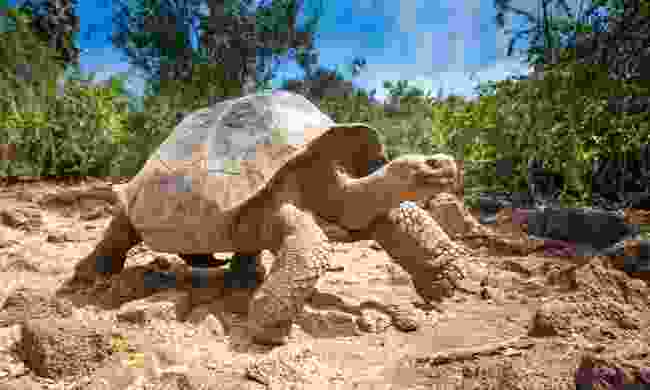 The most famous resident of the Galápagos Islands is the Galápagos giant tortoise – fittingly so because as well as being beautiful, ancient, gentle and, sadly, endangered, the word 'Galápagos' derives from an old Spanish word for “tortoises”. This handsome herbivore arrived from mainland South America 2-3 million years ago, ultimately evolving into 15 species.

Following the death of Lonesome George in 2012, the last Pinta Island tortoise, 10 species are extant and the population is currently estimated at 20,000 individuals. To increase the population, eggs are collected from the wild and incubated at the Charles Darwin Research Station in Puerto Ayora, Santa Cruz. Here you can see the tortoises a few feet away and learn about how the newly hatched tortoises kept in captivity allows them to grow big enough to escape attacks from rats and dogs once they are released. The Santa Cruz highlands and Alcedo Volcano on Isabela have the largest populations of giant tortoises. Populations can also be found on Santiago, San Cristóbal, Pinzón, and Española. 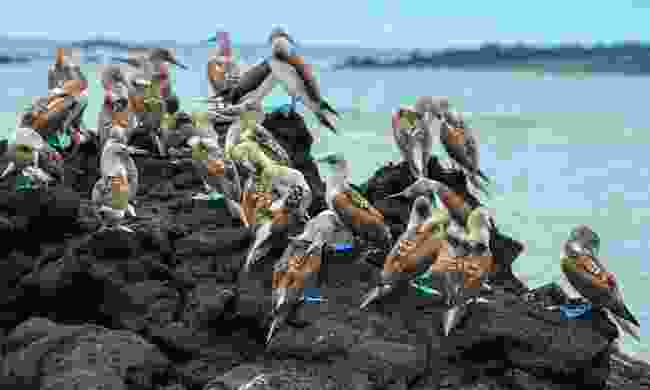 The Galápagos Islands is a global hotspot for tropical seabird life – and has a tendency to convert even non-twitchers into species-smart fiends. That’s partly because its most famous birding sites, the breeding colonies of boobies – which come in blue-footed, red-footed, and Nazca varieties – are mad cities of jostling, chatter and guano splatter. Then there are the six sought-after endemics: the Galápagos penguin, flightless cormorant, waved albatross, Galápagos petrel, lava gull and swallow-tailed gull.

Ben Line, Tailor-made Manager at Journey Latin America, believes one of the greatest wildlife spectacles in the archipelago takes place between April and December on the island of Española: “After many lonely months at sea, up to 30,000 waved albatross return to their birthplace for the breeding season. Quite how these lifelong partners find each other among the squawking crowd is astonishing, but to watch their excited reunion played out through a graceful dance and touching of beaks is a truly memorable and touching experience.” 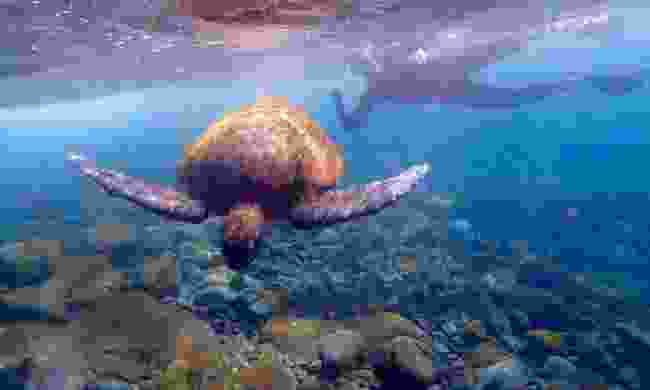 Donning a snorkel to get up-close with sea turtles, hammerheads and white-tipped reef sharks, Hannah Donaldson, Travel Consultant for group tours at Journey Latin America, says this is a major highlight of any trip to the Galápagos. “Even for the uninitiated, opportunities abound throughout the archipelago to snorkel with the prehistoric looking marine iguanas, turtles, cute penguins and playful sea lions. Keen snorkelers will love Tower on Genovesa and Kicker Rock off San Cristóbal where moray eels, spotted eagle rays, manta rays, hammerhead and Galápagos sharks are frequently spotted.”

6: Marvel at the marine iguanas 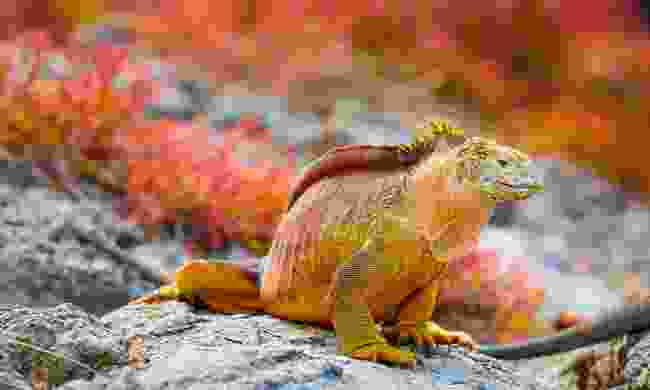 Get up-close with iguanas (Shutterstock)

It’s all too easy to become blasé while visiting the Galápagos, especially when you see a species all the time. The two main types of iguanas seem as common a sight as the many types of tourist, but they are nonetheless marvellous reptiles. The marine iguana, endemic to the archipelago, is the only lizard in the world with the ability to live and feed at sea. Year-round the adults are mainly black, blending into the dark rocks of the coast, males changing colour during the mating season – hue various according to subspecies.

Not agile on land, marine iguanas are great swimmers, gliding through the water as they forage on algae. On the beach you’ll often see them sneezing out the excess salt that gathers in their snout. Marine iguanas are found on Isabela, Fernandina, Española, Floreana, Santa Cruz and surrounding islets; land iguanas live on Fernandina, Isabela, Santa Cruz, South Plaza, Baltra and Seymour islands. 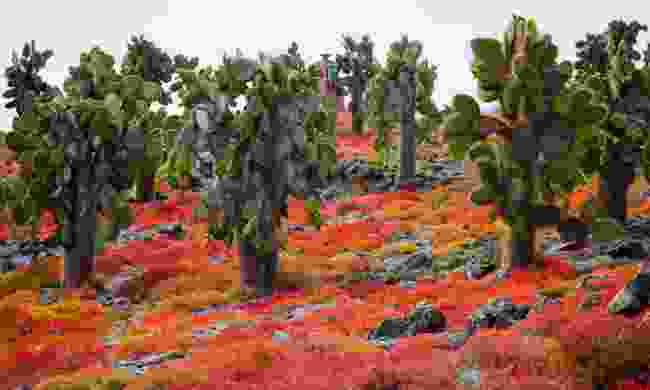 Once you’ve had your fill of all those photogenic mammals, reptiles, seabirds, landbirds, and generally loud, vivacious living beings, make time for plants and flowers. If you’ve spent time in lush, mega-diverse mainland Ecuador, get ready for the desert, or something like.

Along the shoreline is flora tolerant to salty conditions, including precious mangrove trees; all manner of life depends on their hardy ecosystem. The more extensive dry area is adapted to drought-like conditions; here succulent cacti and leafless shrubs flower and grow leaves only in the brief rainy season. Above the dry zones are green, humid zones, with scalesia trees forming dense stands, and mosses, liverworts, and epiphytes in abundance.

When to go: At any time of year some of the fauna species will be breeding, nesting or in some other way particularly active. The climate is not extreme and even in the wetter months the rain usually only comes in afternoon showers. December–May the weather is hot with warm, calm seas and more chance of showers. June–November it is cooler with morning mist and choppier, colder seas.

Currency: Ecuador uses the US dollar. The bank in Puerto Ayora may offer advances on a UK credit or debit card but you are well advised to bring US dollars cash sufficient for your needs on the islands with you.

Getting there: Flight time from Quito is 2–3 hours, 1.5hrs from Guayaquil. Quito flights normally touchdown in Guayaquil.

Combines well with a: Land tour on the Ecuadorian mainland, including Quito and the Avenue of the Volcanoes; the Inca and pre-Inca archaeological sites of Peru (daily flights Quito to Lima 2hrs 20mins).