In five decades, Sydney has transformed into a vibrant international city. Now, it’s not just the beaches that are up there with the best in the world, but the culture, food and experiences too

1: Attend a performance at the Sydney Opera House 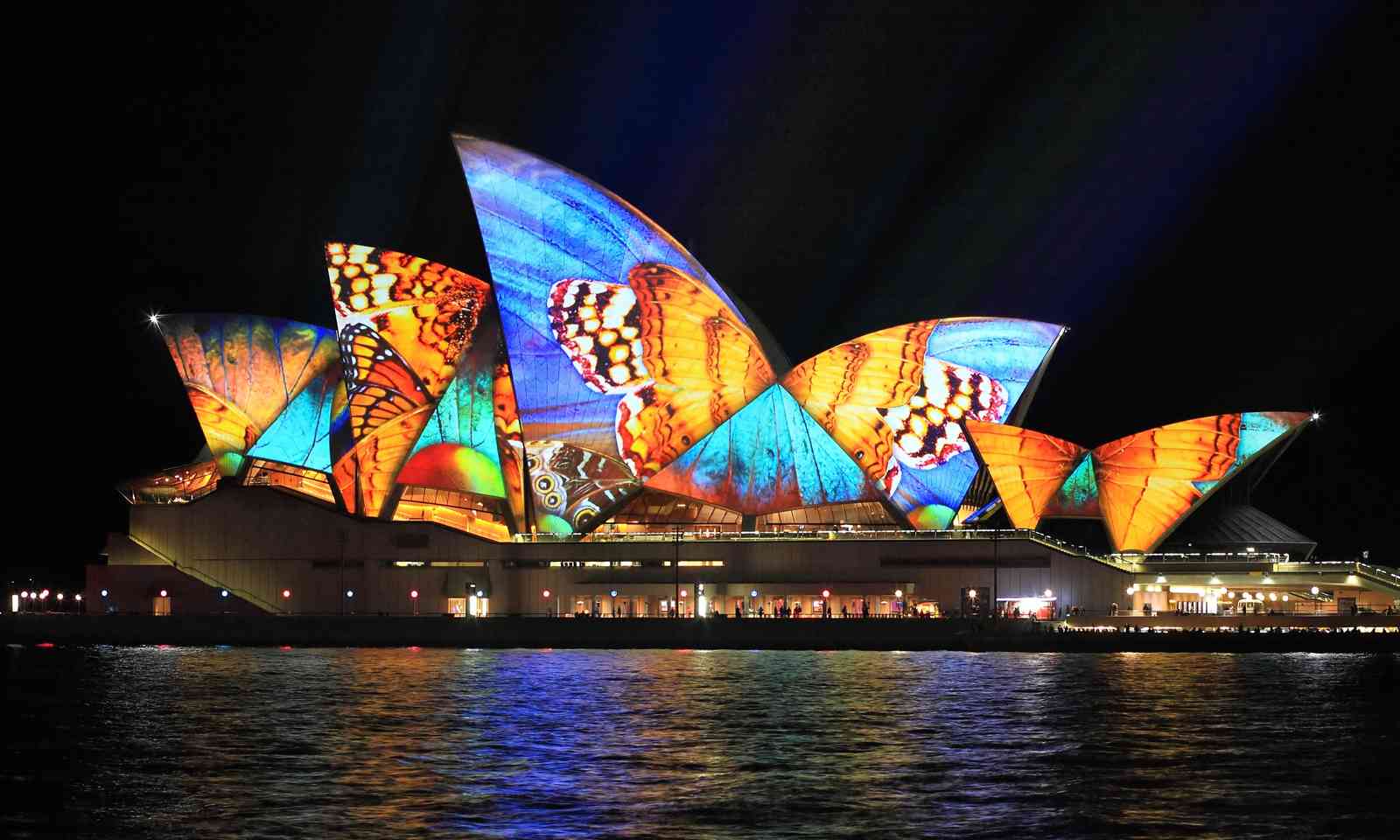 50 years ago, the Sydney Opera House was still five years off completion. The iconic shells were taking shape, but Jørn Utzon, the Danish architect who had designed the building, had quit the year before. 10 years late and 1,457% over budget, there were many who considered the Sydney Opera House an extravagant folly.

How wrong they were. A Sydney Opera House lottery was created and quickly paid off the overspend, and by the time Queen Elizabeth officially opened the Sydney Opera House on 20 October, 1973, it was already famous around the world. It complements its setting like few other buildings in the world and has become a global icon.

The building actually houses multiple performance venues, hosting over 1,500 performances a year. It is home to four resident companies – Opera Australia, The Australian Ballet, the Sydney Theatre Company and the Sydney Symphony Orchestra – and has been the venue for several iconic performances, including Crowded House’s farewell concert in 1996 on the Sydney Opera House steps, which attracted a crowd of over 100,000 people.

Whether you attend a concert, touch the iconic tiles or simply view the building from a ferry or the land, it’s easy to see why the Sydney Opera House has become the symbol of Sydney and why UNESCO added it to their World Heritage list in 2007. Sydney is one of the most multicultural cities in the world, with migrants from over 140 countries. It has had a huge influence on the city, nowhere more evident than in the local food scene.

50 years ago, Australians dined on meat and two veg. Today, they’re just as likely to be tucking into authentic Vietnamese pho or an Asian fusion dish created by some of the best chefs in the world.

You’ll always eat well in Sydney. Informal streetfood abounds in Cabramatta and China Town. You can eat seafood straight off the boats at restaurants in the heart of the Sydney Fish Market. Alternatively, simply try the local Thai in any Sydney suburb, where the ingredients are always fresh and the taste authentic.

It is in the mid-to-high end range that things get really tasty. Sydney has the glamour, the seafood and the sunshine, and Sydneysiders are always on the lookout for the new and fashionable.

Emerging foodie hot spots include George Street, the Central Business District (CBD), Manly, Bondi Beach and Alexandria. Many award-winning chefs are opening establishments in the new Barangaroo development, just west of the CBD, which is definitely one to watch.

3: Admire modern sculpture by the sea 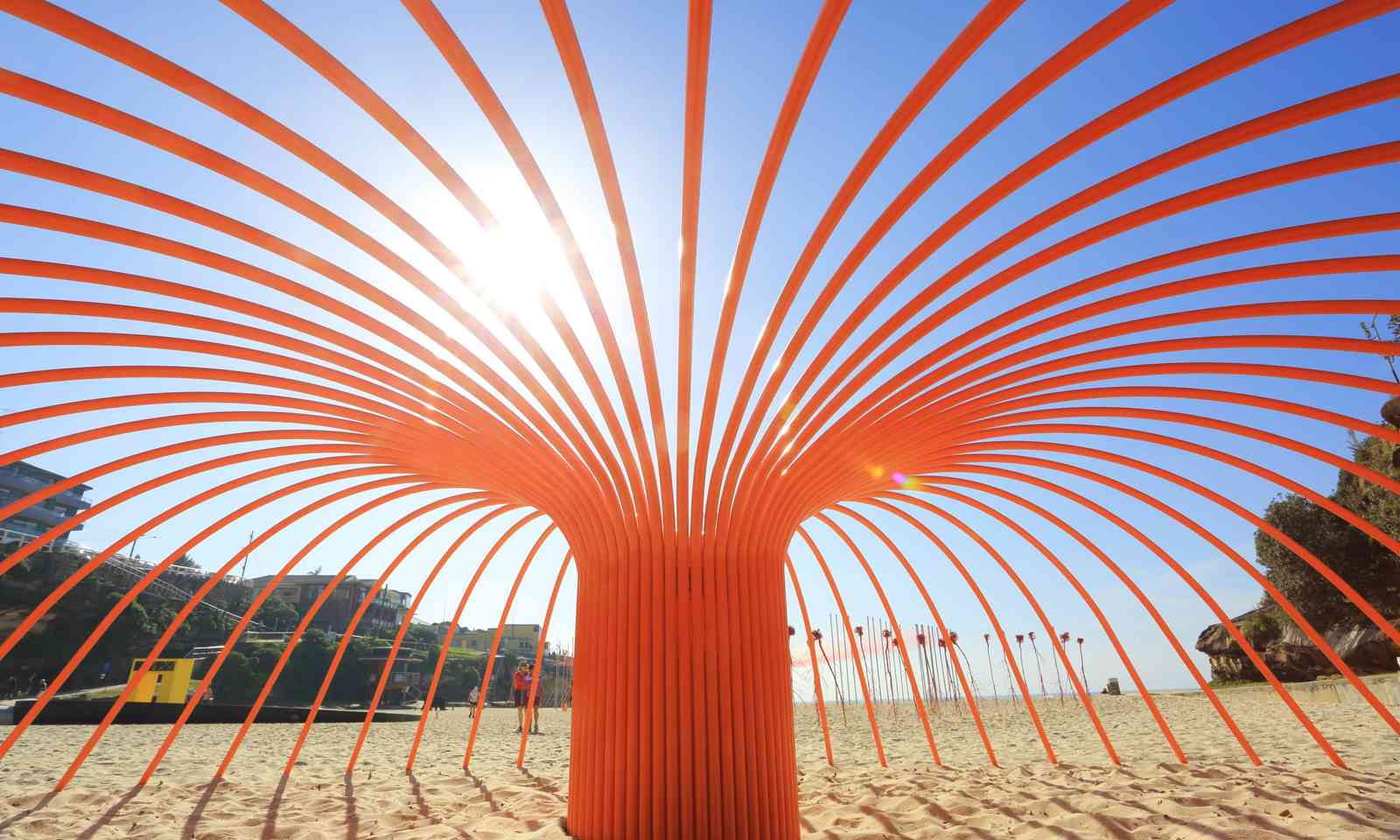 Sculpture by the Sea (Dreamstime)

Every year, for three weeks in Spring, the coastal walk between Sydney’s Bondi and Tamarama beaches is transformed into an outdoor art gallery. Sculptures by the Sea features 100 sculptures from artists all over the world, all thoughtfully (and sometimes playfully) set along the sandstone cliffs for walkers to admire.

It’s the largest annual sculpture exhibition in the world, and Sydneysiders turn out in their thousands to admire and discuss the works.

The event has been running since 1997. While the installations are temporary, many of the sculptures have been gifted to parks and art centres throughout the city. A trundle along the coast walk is highly recommended any time of the year, but when Sculpture by the Sea is on, it’s a must. 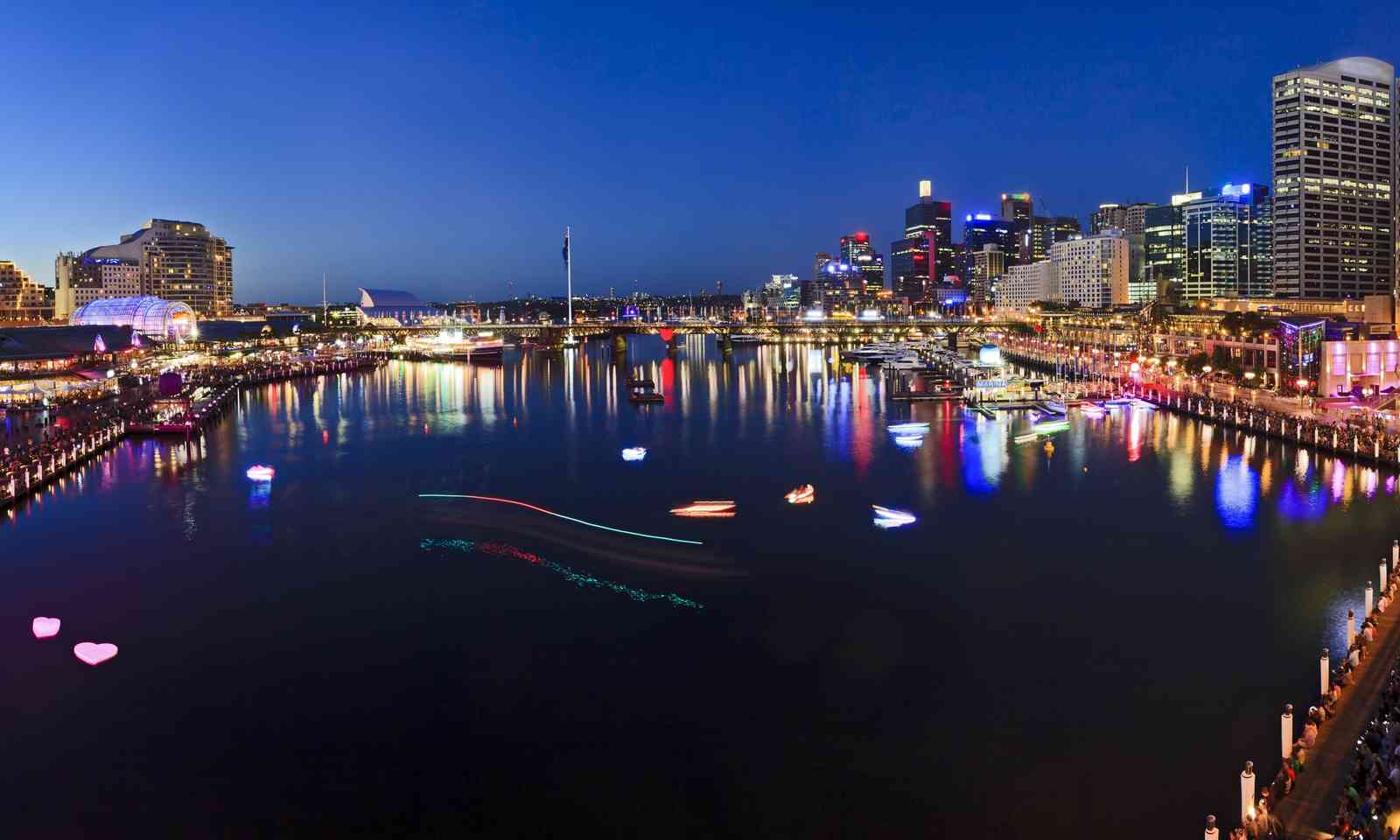 With its wide parks, waterside bars and glittering harbour, it’s hard to believe that Darling Harbour was a railway freightyard 50 years ago. Just west of the CBD, on the edge of bustling China Town, the site was redeveloped in the 1980s and immediately became a focal point for the city.

As well as the spectacular new International Convention Centre and concert-stalwart, the Entertainment Centre, Darling Harbour is home to some of Sydney’s premier attractions, including the Powerhouse Museum, the National Maritime Museum, Sydney Aquarium, Sydney Wildlife Centre and a Madame Tussauds, all within easy walking distance.

There’s no shortage of restaurants or bars either. Take a walk around the sparkling waters of Cockle Bay and take your pick. Just wander in and pull up a chair for brunch, a long lunch or a beer in the sunshine. Once the sun sets, try one of the city’s coolest clubs, also in the area. The old ‘Coat Hanger’, as locals affectionately call their bridge, has been an imposing feature of the Sydney landscape since construction began back in 1923. It’s where Paul Hogan worked as a painter before he threw a shrimp on the barbie.

Each day, over 200,000 vehicles use it to get from one side of the harbour to the other. Solid and indestructible, not much has changed in 50 years, except for one thing: since 1998, visitors have been able to climb it.

Walking along the gangways and walkways used by the likes of workers like Paul Hogan, climbers don overalls, abandon all loose objects (to protect commuters driving below) and head up the giant arches to the top of the bridge.

The view of the city and the harbour are breathtaking, and the BridgeClimb has quickly become one of the city’s premier tourist attractions. 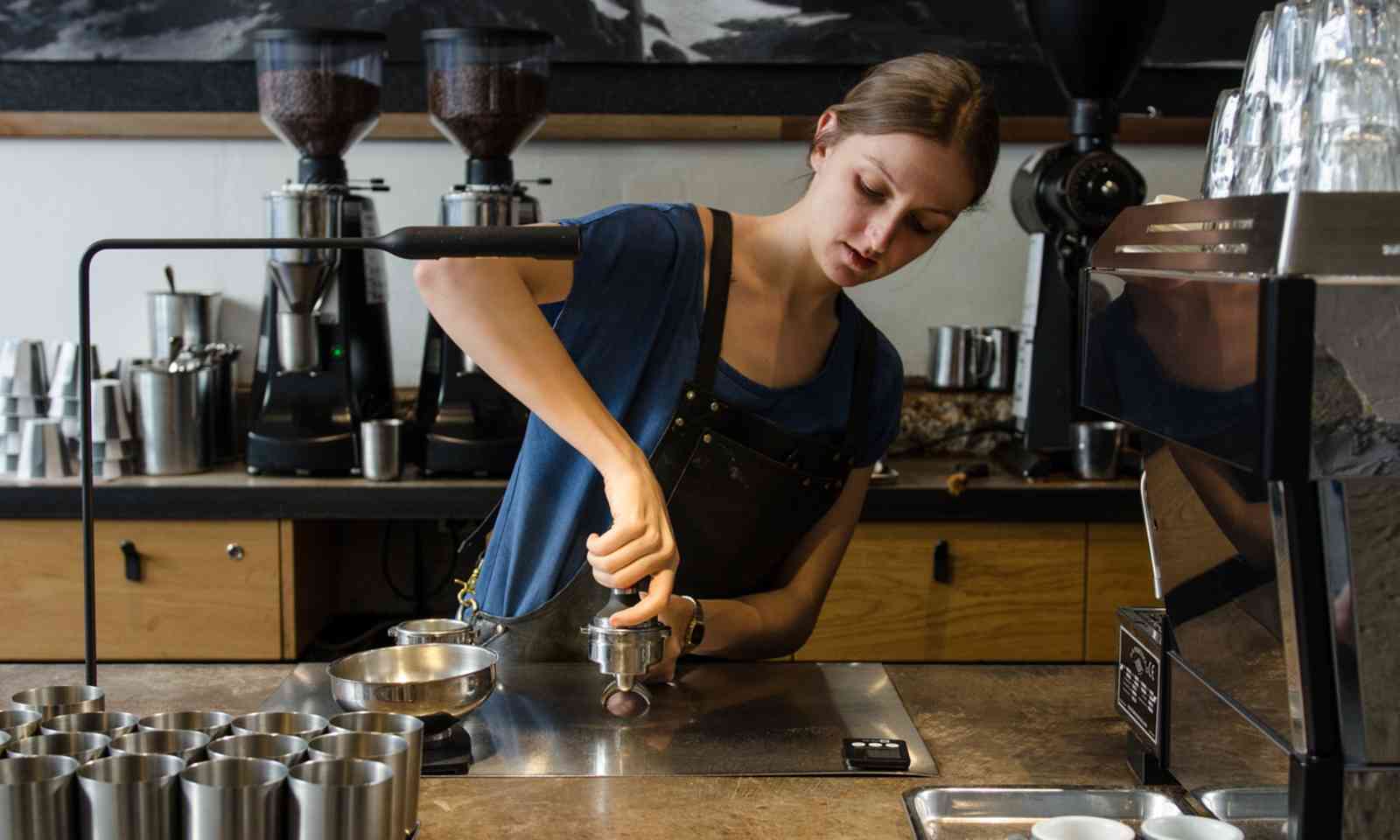 50 years ago, Australia was largely a nation of tea drinkers. Coffee was something only the Italian and Greek immigrants drank. Slowly, the locals were converted, and now Sydney has one of the most exciting and dynamic café scenes in the world.

You won’t find many of the big coffee chains here. Starbucks famously tried to get a foothold and failed. Instead, the city is full of independent cafes, each with their own personality and style. Simply find one that looks to your taste and walk in. The coffee in Sydney is universally good.

If you’re in the CBD, Mecca Espresso and Gumption are worth trying. In Surry Hills, get experimental with the Reformatory Caffeine Lab and Paramount Coffee Project. Alternatively, head to the southern beachside suburb of Cronulla to Grind, regarded as the city’s best café, which is close to the rolling breakers of the Pacific Ocean.

7: Watch the best fireworks in the world

Sydney’s annual New Year’s Eve fireworks are eagerly awaited all around the world. The harbour is a natural amphitheatre and the Bridge and the Sydney Opera House make for the perfect centrepieces. Millions of people cram into the harbour foreshore to ‘ooh’ and ‘aah’ at the incredible display.

It wasn’t always that way. Originally, the midnight fireworks only went for a few minutes and featured your standard starbursts. In 1996, the event was taken over by Ric Birch’s Spectak Productions.

Using their experience creating opening and closing ceremonies for huge sporting events like the Olympic Games, the company decided to incorporate Sydney’s iconic landmarks and create a choreographed fireworks spectacular.

The event used the pylons, arch and catwalk of the bridge, city buildings and one barge located in front of the Sydney Opera House. Sydney has never looked back.

This article was supported by Destinations NSW (Sydney.com) and Singapore Airlines (singaporeair.com), but it is impartial and independent, just like all Wanderlust editorial.

Singapore Airlines have been flying from Singapore to Sydney for 50 years this year, during which time the city has seen a whole lot of changes.

Main image: The view from the top of Sydney Harbour Bridge (bridgeclimb.com)