A guide to Slovenia’s great outdoors: Find the right region for you

With so much green space, Slovenia is perfect for those looking to get active in nature. But where to start? Use our guide to find the right Slovenian region and adventures for you...

Alpine Slovenia: For the thrill seekers 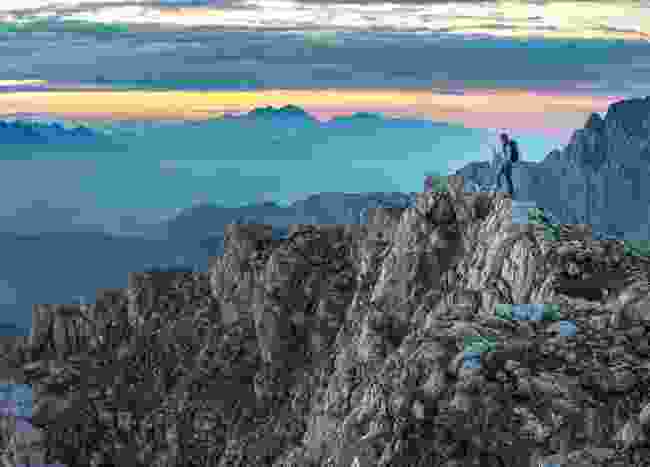 The scope for outdoor adventure in Slovenia’s Julian Alps, Kamnik-Savinja Alps and the Karavanke is almost limitless. Many of the most popular hiking routes are in Triglav National Park, including moderate trails to Triglav Lakes and more challenging climbs on 2,864m Triglav (Slovenia’s highest mountain) along with a whole slew of other peaks, such as 2,332m Mala Mojstrovka and 2,645m Jalovec, with exposed sections secured by cables and steel pegs. Slovenia’s hugely rewarding long-distance hiking trails range from the gentle Juliana and the many trails that weave through the Soča valley to the hardcore challenge of the Slovenian Mountain Trail. 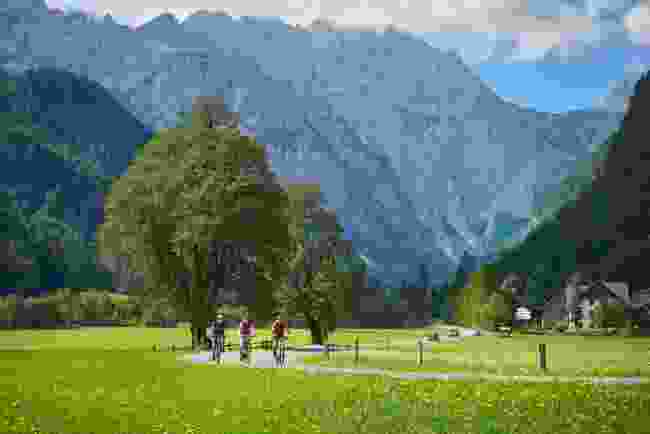 Cyclists can test their legs on the stiff climb to the 1,611m Vršič Pass, over a succession of 50 hairpins – or for something even more strenuous, there’s the road to the Mangart Pass (Slovenia’s highest paved road), which tops out at 2,072m. In either case you can expect vast panoramas of the spiky peaks, saw-tooth ridges and steep-sided valleys which make up this part of the Julian Alps. For a more sedate ride, head for the Logar Valley, or there’s Bike Slovenia Green – an easy 240km cycle tour from Kranjska Gora to the Adriatic, linking places awarded the Slovenian Green certificate, in recognition of their commitment to sustainability. Tržič, Kranjska Gora, the Idrija and Cerkno Hills and many other areas boast a plethora of mountain bike trails, covering all abilities from beginner to daredevil. In the Koroška region, you can even take a subterranean ride through disused mining tunnels beneath Mt Peca.

There’s also plenty to do on the water – join a kayak adventure or try white water rafting on the River Soča, or hire a canoe or kayak on Lake Bohinj. 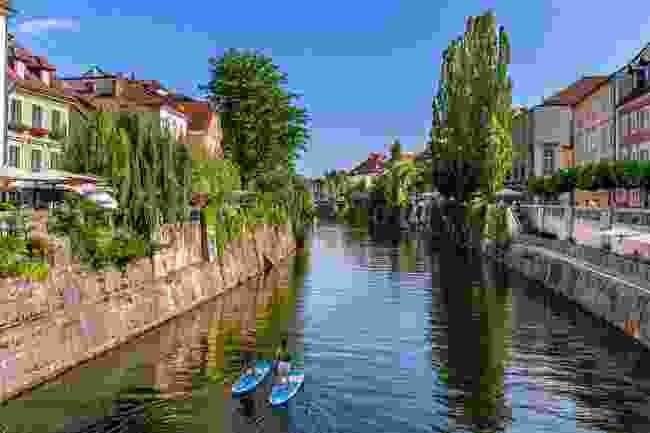 Slovenia’s boundless scope for outdoor adventure doesn’t fizzle out in the foothills of its Alpine region, and there are still plenty of opportunities for hiking, biking and paddling in the centre of the country – including Ljublana itself – while immersing yourself in its many cultural sites.

While staying in the Slovenian capital, jump on a bike and set off to explore the patchwork landscape of Ljubljana Marshes, head out of town for a walk on Šmarna Gora, or try some easy white water rafting on the River Sava nearby. For an alternative tour of Ljubljana itself, there’s the Path of Comradeship and Remembrance – a 33km cycling and walking path around the city, following the former line of barbed wire fences which encircled the city during World War 2, set up by the occupying forces as a deterrent against the Partisans. 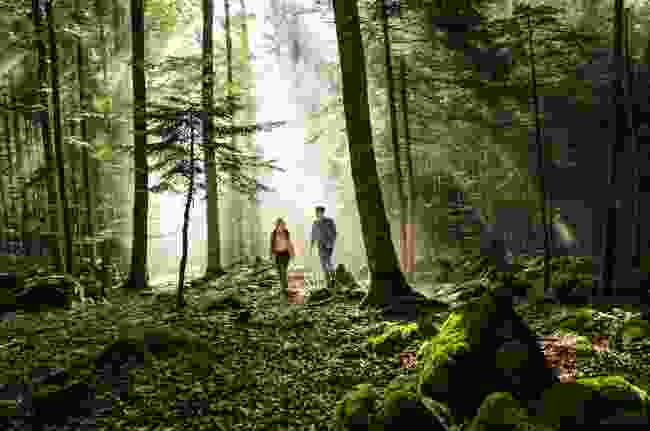 There are plenty of hiking trails in the hills surrounding the historic town of Škofja Loka, while medieval Kamnik with its castles makes a good place for cyclists to strike out on the 130km circuit of the Kamnik-Savinja Alps. Further south in the Bela Krajina region, you can go rafting or wild swimming in the River Kolpa, the warmest river in Slovenia – a great area for families. Kočevje in the southeast is Slovenia’s most densely forested region, and is home to the Krokar forest reserve, a UNESCO-listed swath of primeval beech forest, which can be seen from the Borovec Natural Trail. 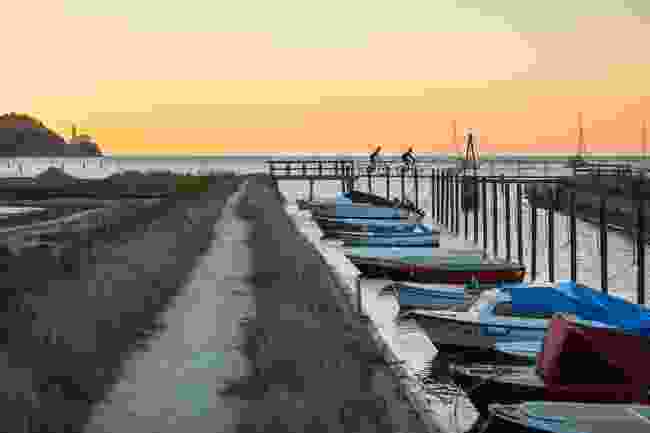 The best way to explore Slovenia’s Adriatic coast is by bike. Try following the Parenzana – a former narrow-gauge railway which ran between Trieste and Istria, and has since been converted into a cycle route. It’s an easy ride which visits the coastal towns of Koper, Piran, Izola and Portorož, and takes you past the salt pans at Sečovlje and Strunjan, both of which are nature reserves and incredibly rich in birdlife. Over 290 species of bird have been recorded at Sečovlje – keep your eyes peeled for Kentish plover, Black-winged stilt, Velvet scoter and large flocks of Yellow-legged gull. The vineyards of the Vipava Valley and Goriška Brda are also wonderful to explore by bike, with plenty of opportunities to enjoy the delicious local cuisine and excellent wines. 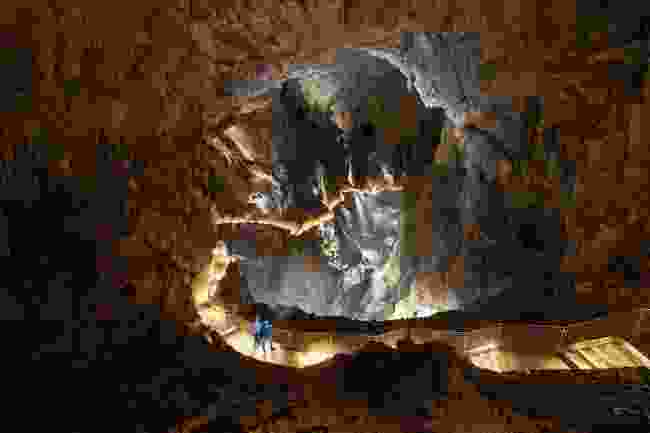 The Karst region is riddled with caves, most famously Postojna, one of the world’s largest and most accessible show caves. Equally impressive are the UNESCO-listed Škocjan Caves, home to the largest known underground canyon in the world, set in an area which is also listed as a RAMSAR Site (a wetland of international importance), a UNESCO Biosphere Reserve, and a Natura 2000 Site. Hikers can reach Škocjan on the Via Alpina, along with Lipica – the original royal stud for Lipizzaner horses, founded in the 16th century – and the iconic Predjama Castle, wedged below a cliff. The latter stages of the Alpe Adria Trail hop back and forth between Slovenia and Italy, taking in vineyards and First World War heritage sites, and also visit Lipica.

On the water, try your hand at stand-up paddleboarding off the waterfront in Izola or Piran, or in the beautiful Moon Bay near Strunjan. 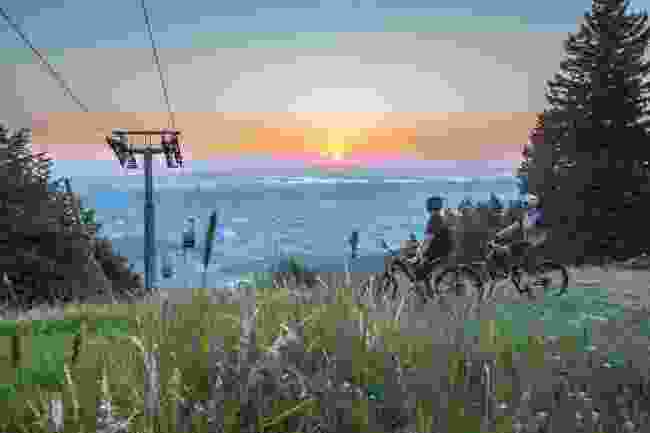 The eastern part of Slovenia is a great area for combining easy walking and cycling excursions with visits to castles and vineyards or a relaxing stay in a spa.

Part of the Drava Cycle Route runs across the northeast corner of Slovenia, stretching for 145km and passing through the historic towns of Maribor and Ptuj on a well-maintained riverside trail, level and great for families. Cycle through vineyards in Pomurje or stroll alongside the River Mura, or further south hire a bike to visit the castles and vineyards of the Posavje region, or stretch your legs walking the local forest trails after visiting the imposing castle in Celje. 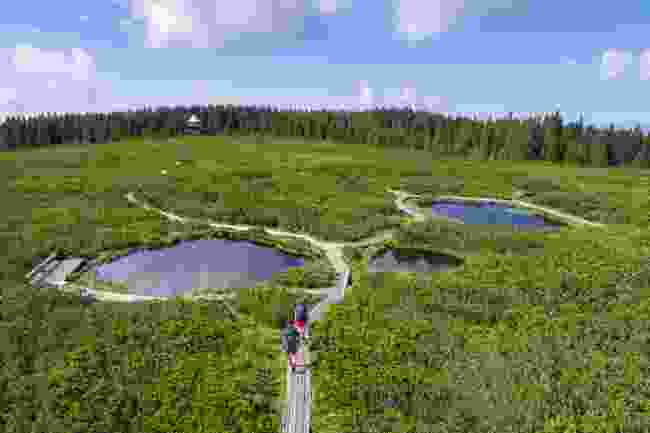 While less well known than the Julian Alps, Pohorje is another of Slovenia’s great hiking areas, with rolling hills, and peat bogs surrounded by spruce forest where the fragile landscape of ponds and lakes can be explored by walking trails along wooden boardwalks. Highlights of this area include Lovrenška jezera and Črno jezero. The Slovenian Mountain Trail – the country’s oldest long-distance hiking trail, which begins in Maribor – crosses the hills of Pohorje, and this is one of the easier parts of the trail to walk, before it becomes a much more challenging high level route in the Kamnik-Savinja Alps further west.

For more inspiration and information on Slovenia, head over to the official Slovenia website.