7 wild and wonderful ways to spend winter in Slovenia

Hit the ski slopes in the morning, unwind at the spa by afternoon, and indulge in hearty cuisine in the evening. Choose from these incredible ways to experience the best of snow-covered Slovenia...

When I tell friends that Austrians and Italians are tempted to leave their own winter heartlands behind to travel to a ski and winter sports destination they sometimes look doubtful. Clap eyes on bijou Slovenia, a European country that packs some seriously world-class winter sports into one easily navigable, compact and intensely beautiful package, and they are instantly convinced. I’d like to share my seven reasons that excellent value, seldom-crowded Slovenia is Europe’s top place to get wild and chill out in winter.

1: Make the most of being outdoors 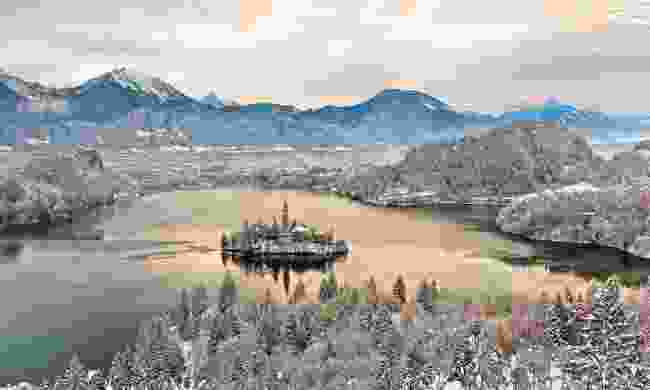 Slovenia is a compact country that is slightly smaller than Wales. That has the serious advantage of making it easy to get around so you can pop between the resorts and different runs. The roads are great too. If conditions are not totally to your liking at one place, move on.

It may be small, but the country boasts an almost embarrassing natural beauty with winter seeing its massive Alpine mountains and craggy peaks laced with glorious snow, with plenty of fresh snowfalls through a long season that continues on to spring. The ski fields are peppered with two of the most picturesque Alpine lakes in Europe – Bled and Bohinj, both ideal for a romantic winter getaway. The highest peak is Triglav (2,864 m), which lies at the heart of the spectacular Triglav National Park in the chocolate box pretty Julian Alps. 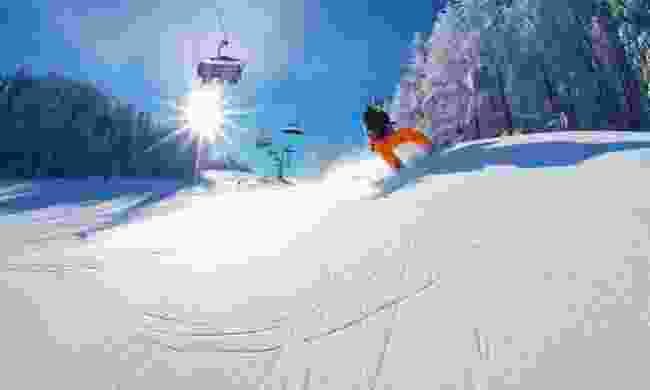 Snowboarding in Slovenia (Slovenian Tourist Board)

We are talking a country of two million people where 70% of the population engage in sport. Year round. Think about that for a second and compare that to where you live. No wonder Slovenia boasts over 5,000 athletes, 500 or so of those competing at the highest level.

The government and the private sector both continue to invest in facilities, so the result for you is a country where anyone keen on getting active is welcomed with open arms and investment keeps being pumped in. It’s little surprise that per capita Slovenia came second only to Norway at the 2014 Winter Olympics. Slovenes are proud that judged by GDP Slovenia won more medals than other country in the last Olympics. So how about joining the sports Slovenes this winter? 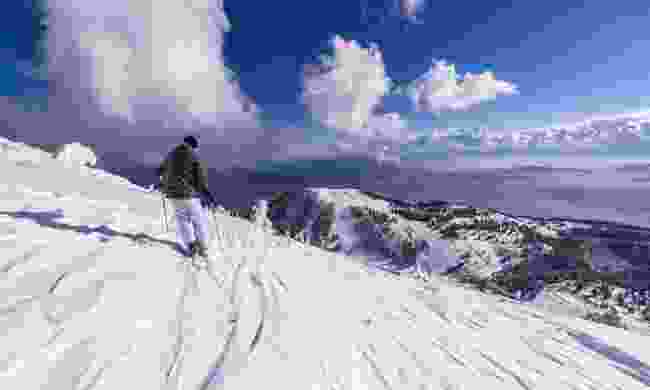 Skiing in Slovenia (Slovenian Tourist Board)

Slovenia’s resorts offer all the facilities you need plus access to slopes, whether you are a first timer looking to learn the ropes or a more accomplished skier intent on really challenging yourself. Here you can ski in national parks and areas of jaw-dropping beauty.

The granddaddy of Slovenia’s resorts is Kranjska Gora, but it is backed up by an impressive cast that includes Rogla, Krvavec (within 10km of Slovenia’s busiest airport), Pohorje (home to one of Europe’s longest illuminated ski slopes), multi award winning Cerkno, Vogel (with its Lake Bohinj views), 2,000m high Kanin, Golte, Kope, Soriska planina, Velika planina and Stari Vrh. Nab a SkiPass and you can ski at all the resorts around the country.

4: Do more than just ski 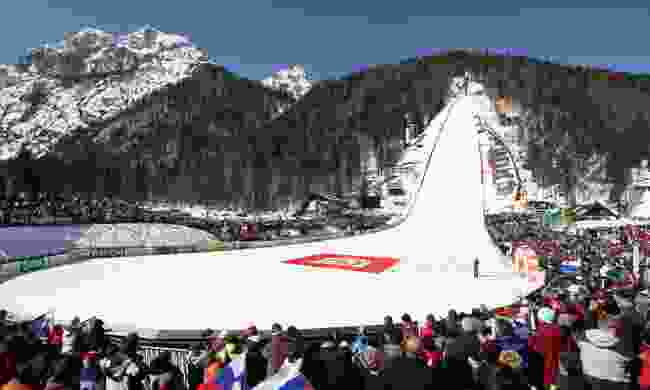 Want to do more than just ski? Well snowboarding is really catching on in Slovenia with myriad options around the country. Slovenia is also famous for ski jumping, though you may want to watch rather than take part in a sport with the ultimate steep learning curve.

The best place to head is Planica, which has hosted a slew of major championships (including a round of the World Cup) and witnessed the setting of a number of spectacular world records. Cross country skiing and snowshoeing are also national pastimes on the high snow clad mountain plateaus, with tuition available to get you into these calorie burning, heart pumping activities. Pokljuka, which lies between the lakes of Bled and Bohinj, is a vast forested plateau that hosts an annual Biathlon World Cup event. It is also a major cross country skiing centre. 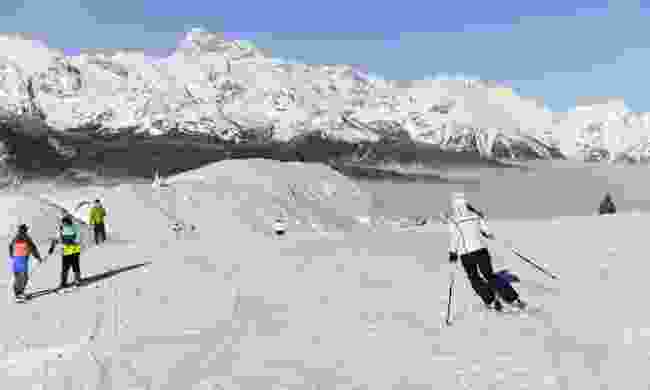 Slovenia’s resorts tend to be on the smaller, less formal side, which makes them ideal for families. English speaking instructors and staff also mean sorting out the needs of all the family is never difficult. There are nursery runs, snow parks and crèches amongst myriad facilities for wee ones. I like that Velika planina is very close to the capital of Ljubljana (make sure to pop into the Christmas Markets) and the main airport. Tuition here is very much tailored towards families and off the ski runs the whole family can enjoy sledding or try out snowshoeing on freshly fallen snow.

6: Take time to chill out 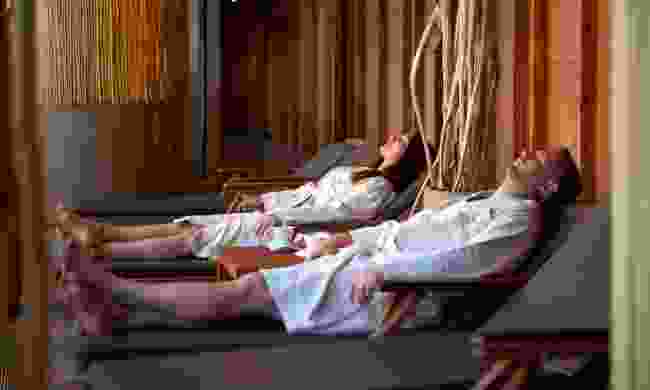 When you want to seriously relax there is nothing like a good spa. Slovenia doesn’t have those – it has great spas! Or I should say termes as they are often called here. There are terme complexes dotted all around the country. The set up at each is different, but think lots of bubbling pools of healing thermal water (Slovenia has 15 certified natural spas) indoor and out, plus specialised health and beauty treatments. We are talking serious relaxation in these wellness oases.

You will find smaller spa facilities at many hotels too in a country that is serious about health. Some of the handiest termes for the ski fields include Terme Dobrna spa, which has been around since 1403, Terme Ptuj, Terme Topolsica (which reclines in its own woodland) and Zrece, which could scarcely be closer to the Pohorje ski fields, ideal for couples or groups where some people want to ski more, while others just want to recharge. 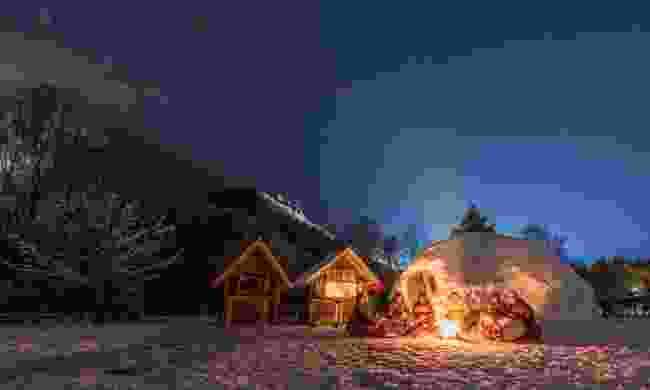 When you come off the slopes in Slovenia you are in for a warm welcome. Think traditional inns where steaming soups and hearty traditional meat dishes await, not to mention gloriously tasty desserts like potica and gibanica. Then swirl in the country’s excellent beers and wines and those aches and pain will quickly dissolve.

Slovenia’s resorts are more chill out than party places, though there are plenty of venues in the bigger resorts like Kranjska Gora where a younger crowd also let their hair down. For a healthy tipple try Radenska, the mineral rich spa water that is virtually a national drink in clean, green Slovenia.