From the beautiful Mosselle Valley to the medieval architecture, we shine a light on this verdant and vineyard-covered region known as ‘Romantic Germany’...

Hugging Germany’s western border, just a 90-minute direct flight from the UK, the leafy Rhineland-Palatinate region is home to the beautiful Moselle Valley. It’s often missed by visitors but its emerald countryside, medieval architecture, wine regions and authentic Christmas markets (this is Germany, after all) are just a few of the reasons to visit. We take a closer look at the aptly nicknamed ‘Romantic Germany’… 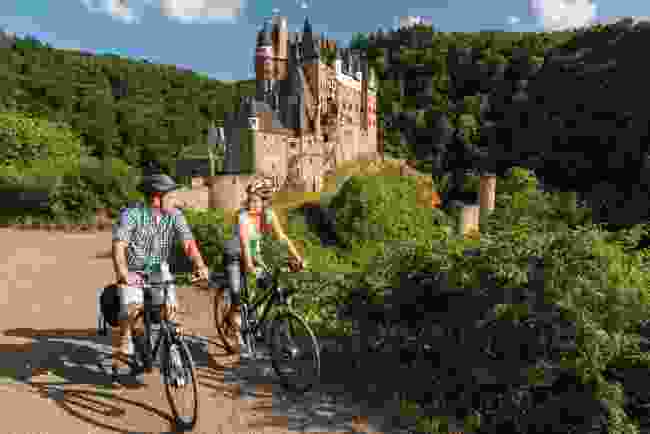 Meander through Rhineland-Palatinate to see a who’s who of architectural artistry through the ages. Burg Eltz is a romantic castle that looks as though it’s come straight out of a fairytale, and the half-timbered houses of Bernkastel-Kues are a magical dose of the Middle Ages. Don’t miss Trier, the oldest city in Germany, and its many UNESCO World Heritage sites. It boasts the country’s greatest trove of Roman ruins, including thermal baths and an amphitheatre, as well as the famous Roman town gate Porta Nigra, and the birthplace of philosopher Karl Marx. 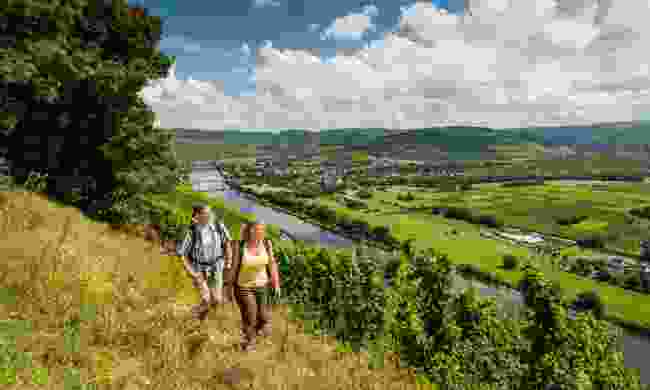 The lush Moselle Valley, ribboned by its namesake river, is a natural playground for hikers and cyclists, with plenty of trails crossing the countryside. One of the best is the 365km-long Moselsteig Trail: treading just a small section puts you among forests, historic wine-making villages and Roman and medieval treasures galore. The annual Wünschelrouten (a vineyard hike typically held in early November) spices up the Moselsteig, with winery visits offering welcome pit stops during the day’s walk. Prefer exploring on two wheels? The Moselradweg is a thrilling pedal past vineyards, lime-green hills and chocolate-box towns. 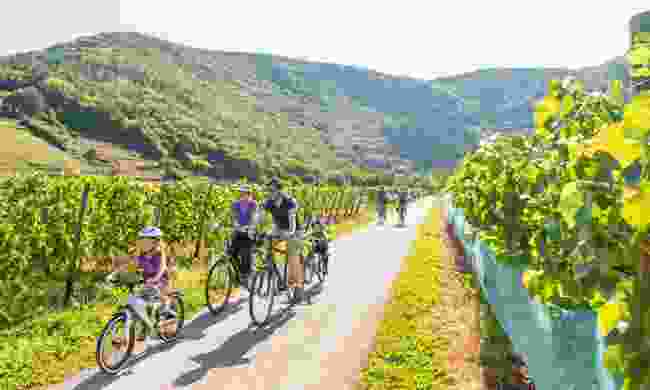 Cycling through the vineyards of Rhineland-Palatinate (Dominik Ketz)

Rhineland-Palatinate is Germany’s biggest wine-producing region. A single glimpse across the Moselle Valley reveals a plethora of vine-wrapped hills. In late summer and early autumn the region celebrates the annual grape harvest, with several towns hosting wine festivals. The pretty streets and squares of Bernkastel-Kues‘ old town are a spectacular setting for the Middle Moselle Wine Festival, which has a lively float parade and a vintners’ procession you can’t help but raise a glass to. 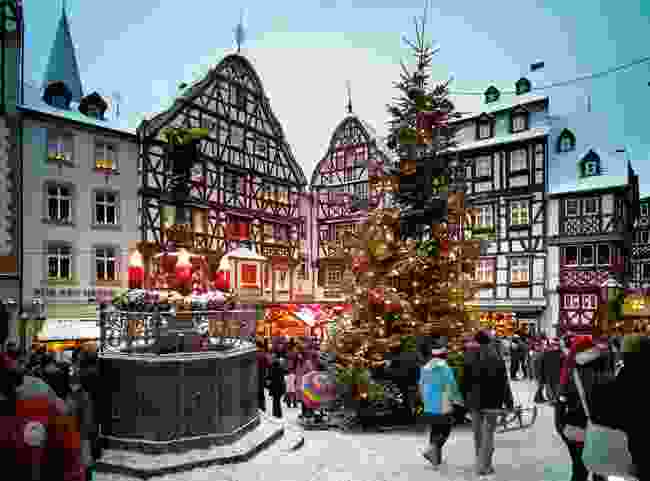 During winter, the Moselle Valley becomes a Christmas card scene, with festive markets popping up from late November. While Trier has one of the biggest markets in the area, don’t miss the nearby town of Traben-Trarbach, with its underground stalls set in ancient wine cellars. The festive market at Bernkastel-Kues is one of the region’s prettiest, its stalls lighting up the medieval old town. You’ll be craving gingerbread and glühwein as soon as you arrive.

The romantic region around Rhine and Moselle is perfect for a holiday in Germany offering enchanting places and cities, excellent wine regions and great opportunities for hiking tours and bike holidays. For more information, visit: romantic-germany.info